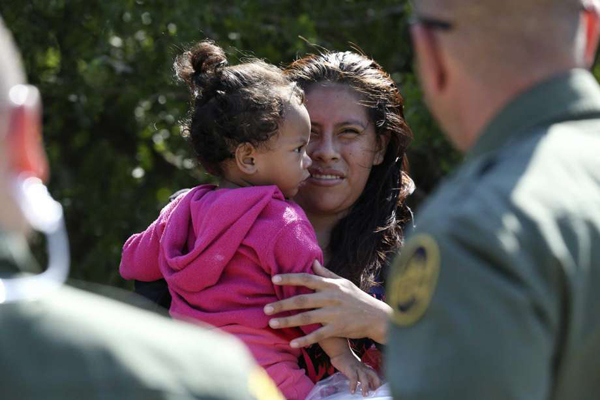 Should there be any doubts that the US is moving toward a fascist coup, events of the last two weeks should have dispelled them. Trump broke with our European and North American allies. He reconfirmed his loyalty to Putin and Kim. He launched an international tariff war. And now he and his Gauleiters Jeff Sessions and Stephen Miller have created, more or less in the open, concentration camps for children.

(Let’s remember that “concentration camps” were not necessarily conceived as “death camps.” They were areas in which a rounded-up population were “concentrated” for further state-imposed processing.)

What has held back the tide of full-blown fascism? The media, elite or grassroots, have done their duty with surprising vigor. I noted last year [3] that reporters were starting to spotlight the lies of the Trump administration, and now even the gray old Times ventures a “falsely” or two [4]. Without the leaks, analyses, and exposés, we wouldn’t know about the camps, the scandals, the moral vacuity of Congressional Republicans, the dissolution of regulations on corporations, the palace intrigues of corrupt advisers, and the depredations of a president™ elected by a margin of 77,000 imbeciles’ votes [5].

The courts, at least those not yet supervised by Trump appointees, have pushed back as well. In tandem, the Mueller investigation plows methodically on, bringing to light a cast of characters whose intellectual endowment makes the wise guys in Gotti look like particle physicists.

Still, the Base (well-named) is getting a new reality show. Trump campaigned by winning every day’s news cycle; he provoked coverage and reaction, which allowed him to holler back, raise the stakes, and keep everything going. The immigration drama is the new main attraction. Many will glory in watching the stupendous power of the US being inflicted on toddlers and mothers in blazing heat.

The Base embraced Trump for “telling it like it is”–that is, venting the vileness that minimal civil courtesy kept in check. But they’re not deep thinkers. One could tell the Base that there’s a difference between asylum and illegal immigration, and that crossing the border without permission, legally speaking, is a misdemeanor comparable to a traffic ticket. One wonders if the Base even recognize the difference between legal and illegal immigration. In addition, huge sectors of the economy (agribusiness, construction, meat packing, hoteliery) depend on immigrant workers, including illegals, willing to perform jobs that the Base prefers to avoid, at least at the wages offered by cynical employers. But informing the Base about such nuances would run against the grand plan to homogenize our country–and expand the Base.

This coup is proceeding fairly quickly. Hopes that November 2018 could turn things around seem to me overoptimistic. A lot can be wrecked in a few months. And if Trump and his party can do anything, they can win elections, somehow. The Democrats, as usual, fumble and flounder and dissipate their energy through internecine quarrels. Maybe they should devote less energy to asking me for money and more to explosive, top-of-the-voice outrage on any forum they can seize. Trump provokes emergencies; his opponents should go ballistic. Call it the Alan Grayson tactic. (Remember his summary of the Republican health-care plan: “Die quickly.” We remember it because it hit home, and proved prophetic.)

Trump is the culmination of Republican conservatism from Goldwater to Reagan to Gingrich, intensified by  the Tea Party franchise. The proof lies in Trump’s easy victory over his rivals and his swift takeover of Congress. Similarly, the dithering of the Democrats is a direct result of their shift toward defending the urban meritocracy of Wall Street and Silicon Valley. (On this, Thomas Frank’s Listen Liberal [6] is the essential text.) That bias found its initial focus in the Clinton regime, and it was continued by Obama. One beguiling sideshow of recent weeks was the reappearance of Bill, talking about the Lewinsky affair and revealing himself, once again, as devoid of any scrap of personal honor.

I’d like to be more hopeful. It’s possible that Sessions, Miller, and Trump have overplayed their hand. Even some Bible thumpers have drawn the line at wailing children, and the hicks are starting to notice that they need immigrant labor and that tax cuts don’t offset trade wars. Some voters may realize that Trump and the Republicans want to take away favored stretches of the Affordable Care Act. Trump has counterpunched on the immigrant issue, but he may well find a way to back down while declaring victory. As I type this, Senate Republicans are engaged in damage control. [7]…at the very moment that they propose cutting Social Security, Medicare, and Medicaid [8] to pay for the income tax cuts. Perhaps the base will notice.

But don’t bet on it. Overall support for Trump is solid, perhaps swelling, and not just among his core, the gun fondlers and the white supremacists. CEOs like the deregulation [9], the holy rollers favor humans in fetus form, the exurbanites savor the punishing of the people who were the reason they feared the city, and the peckerwoods just like to chortle at liberal outrage. Quite a coalition. Indeed, you could treat the border crisis as a massive get-out-the-vote effort aimed at that mob. Like what you see? Vote Republican!

Moreover, the increasing authoritarianism of Trump’s demeanor suggests that each day brings a new power grab. He will likely be boosted by a passive Republican congress and Democrats who are perpetually concerned, disturbed, and brow-furrowed but never, somehow, furious. So we can’t assume that he won’t keep trying to expand on his brutal impulses. 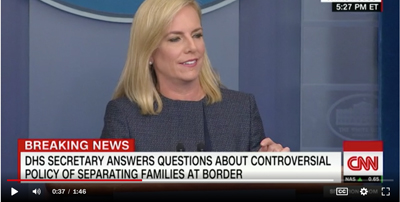 (1) Trump continues to show himself a coward. When he met with Mexico’s president during the campaign, he didn’t dare to raise the demand for a wall. Meeting dictators in the Middle East and Asia, he bowed and scraped. Now, flexing his muscle on kids, he and his minions tell half-a-dozen different stories about the HHS policy rationale and deploy John Kelly’s puppet Homeland Security Secretary Kirstjen Nielsen (above) to fend off the press with smirking lies. Trump himself will not confront his critics, playing only to Fox News toadies and multitudes of simpletons jammed into rallies.

(2) 2016 was, we now realize, an outsider election. Bernie could have won. But even if he had lost, wouldn’t it have been worth the risk?

P.S. 20 June: Odd that people who decry Big Government would undertake a massive enterprise like setting up a refugee camp. But the point is to do it badly, like the Katrina debacle and the tragedy of Puerto Rico [11]. The bureaucratic failures to track parents and children who are separated are not only predictable but part of the package, a feature not a bug. Remember the Republican slogan: “Government doesn’t work. Elect us, and we’ll prove it.”

Some anecdotal confirmation that this round-the-clock spectacle is exactly what the White House wants comes in this Vanity Fair piece [12]. Predictably, Stephen Miller is having the most fun of all.

Meanwhile, as the border crisis spirals, the absence of a coordinated policy process has allowed the most extreme administration voices to fill the vacuum. White House senior policy adviser Stephen Miller has all but become the face of the issue, a development that even supporters of Trump’s “zero-tolerance” position say is damaging the White House. “Stephen actually enjoys seeing those pictures at the border,” an outside White House adviser said. “He’s a twisted guy, the way he was raised and picked on. There’s always been a way he’s gone about this. He’s Waffen-SS.”

What pimply pre-teen would have imagined that de-pantsing little Stevie on the playground would have had such consequences? 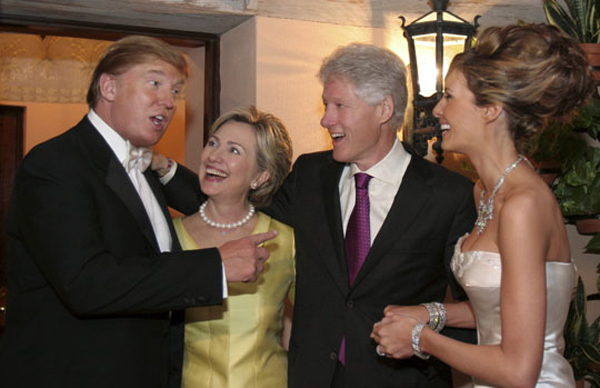 Newlyweds Donald Trump Sr. and Melania Trump with Hillary Rodham Clinton and Bill Clinton at their reception held at The Mar-a-Lago Club in January 22, 2005 in Palm Beach, Florida. (Photo by Maring Photography/Getty Images/Contour by Getty Images)