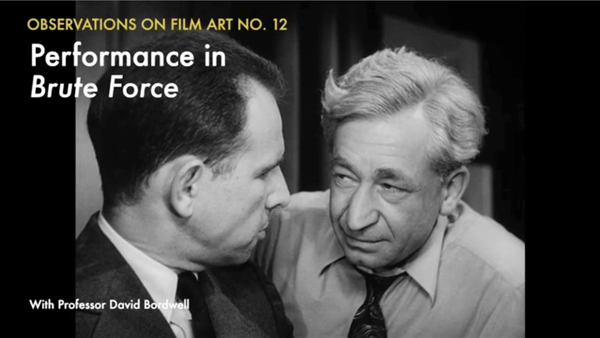 If there’s one film technique that probably everybody notices, it’s acting. Reviewers are obliged to judge performances, and viewers often comment that this or that actor was admirably controlled, or wooden, or over the top. Yet acting is surprisingly hard to describe; the critic who can do it engagingly, as Pauline Kael could, wins plaudits.

I think it’s fair to say that film analysts haven’t on the whole found good ways to analyze acting. There are books about historical acting styles, and there’s a very good theoretical overview [2] by—no surprise—Jim Naremore. Our colleagues Ben Brewster and Lea Jacobs have produced a superb study of acting [3] in the early feature film, with careful attention to the conventions of the period. But I think there’s still more to be done in terms of analyzing how performers achieve their expressive effects.

Or so I suggest in the newest installment of our series, “Observations on Film Art,” on the Criterion Channel [4] of FilmStruck [5]. Using Brute Force as an example, I try to lay out in brief compass some primary tools that actors wield. There’s an excerpt here [6]. Today I’ll sketch out what I tried to do. 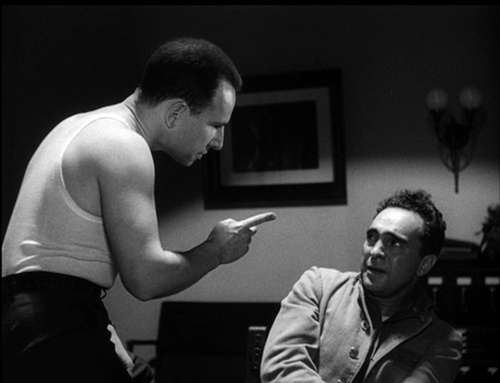 Talk about acting tends to set “realism” or “verisimilitude” against “artifice” or “stylization.” The Method, we sometimes say, is an example of realism, while Expressionist acting à la Caligari is at the opposite pole. Classic Hollywood acting, from the late 1910s into the 1940s, we might say ranges across the middle.

Accordingly, some theorists of acting are realists, favoring one zone and finding the other too artificial. Others are conventionalists; they argue that all acting, even the most apparently realistic, is actually stereotyped. It looks realistic because we accept the conventions of a time or tradition as the way people actually behave.

I think it’s worth suspending this polarity and simply looking at how performances are built up out of pieces. Like Meyerhold’s Biomechanics and Kuleshov’s engineering approach to acting, my perspective here is that of seeing performances as clusters of controlled choices about specific bodily behaviors.

As a first approximation, I propose that acting of any sort starts with some norms of human facial, vocal, and bodily expression.

Many of those norms might be universal. I’m risking disagreement here, since the US humanities are predicated on a fairly radical relativism. But I think that’s implausible. Is there any culture where smiling reliably indicates unhappiness? When frowning and shaking your fist in someone’s face indicates affection? Where pointedly turning your back on someone shows a willingness to engage socially? Where sloping your shoulders, tipping up your inner eyebrows, rearing back your head, turning down your mouth, and wailing indicates joy rather than misery? (The guitar-hugging rocker’s cry of anguished teen spirit draws on the ensemble of cues we see in the mother cradling her wounded child.) Nobody expresses pride by dropping to a crawl.

The context can qualify or negate these signals, of course. One may smile and smile and be a villain. But exactly because cordial smiling isn’t the default signal of villainous purpose, Shakespeare is able to make his point about deception. Any expression can be faked; that’s what acting is. At bottom, though, taken singly and reinforced by other inputs and circumstance, there are some reliable expressive cues in the typical case.

But even if you believe in the social construction of everything, my point still carries. Humans in any community emit a stream of behaviors in face, voice, hands, posture, stance, and so on. Maybe those bits are wholly constructed socially, or maybe universal proclivities play a role too. In any case, what the actor does, I posit, is survey the range of such behavioral possibilities for the role she is to play. She then does two other things.

First, she selects only a few. Any performance depends on picking a few behavioral bits to carry expressive impact.

Second, at any given moment, the selected features are emphasized, even exaggerated. The actor bears down on the selected behavioral bit, dwelling on it. The clumsy, sometimes contradictory flow of real-life behavior gets simplified and streamlined for easy uptake.

For example, certain body parts may dominate the impression. If we’re to watch the hands, the face can be fairly neutral. 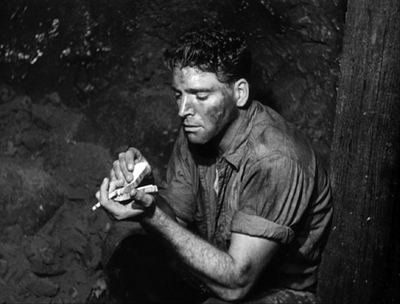 Correspondingly, in cinema the shot can be scaled to stress the one gesture—in this case, a pat of comradeship. 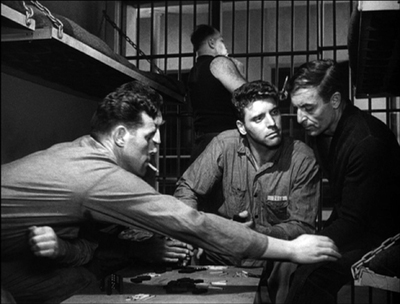 If we’re to watch the face, keep the hands and body still. Film technique can help you by recruiting our old friend the facial view. I talk about several examples in Brute Force, of which this is one of my favorites—two frontal faces, blatantly unrealistic but riveting (as Eisenstein knew; see below). 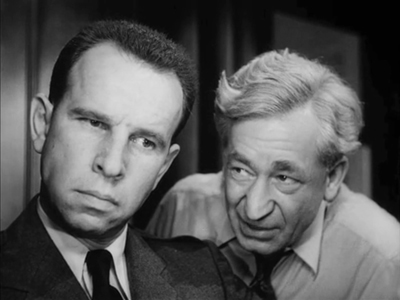 Only the eyes move, and one mouth, barely.

Or, if we’re to watch an eye-flick, keep the face neutral. 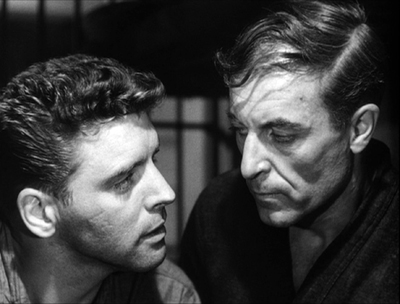 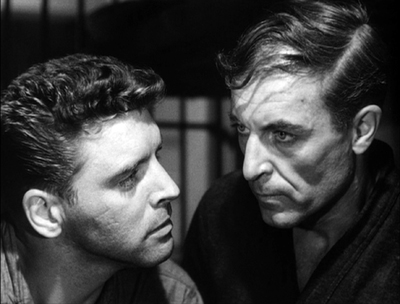 Indeed, you can argue that the development of the intensified continuity [13] style, which concentrates on facial close-ups, gave the actors less to do with their hands and bodies than did the greater range of shot scales available to studio cinema from the 1910s to the 1960s.

To smack us with a bigger impact, the filmmakers add up the channels. In this scene of Brute Force, the commissioner takes control of the prison from the warden, and the two men’s facial expressions—determination on one, fear on the other—are amplified by their paired gestures of wrestling for the loudspeaker. 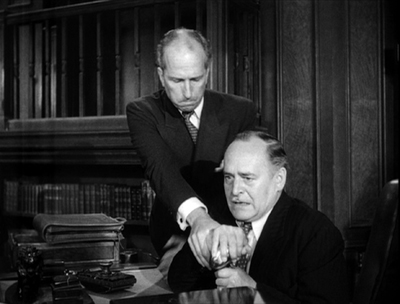 The effort shows not only in their postures and fingers but their faces.

At high points, we can go for all-over acting, face and gesture and bearing and voice, as when the snitch faces his fate in the machine shop. 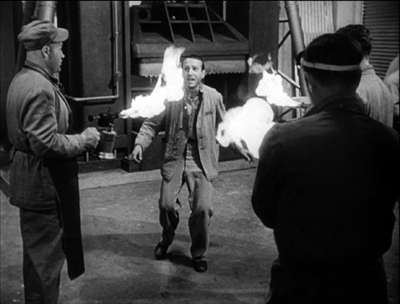 But note that even here, as an ensemble element, other factors are neutralized. The attackers are seen from the rear and poised or moving stiffly and inexorably. Similarly, the pure animal outburst of Lancaster’s performance at the climax depends on several factors of expressive movement swept together. 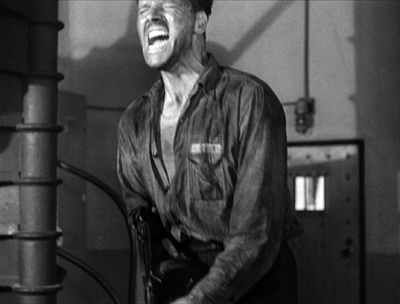 Wounded, he lets his boiling rage explode; even the frame can’t contain him. But even here there’s selection and emphasis. The head and voice and straining neck do all the work, while the arms remain taut.

The tools I survey are simple ones: eye areas (not so much the eyes as the lids and brows), mouth, tilt of the chin; bearing and stance; hand gestures; and rhythm of walking. In the Observations installment, I look at how the performances in Brute Force play off against one another, and I sum up the resources in Lancaster’s fierce performance, using all of the tools he had. That wedge of a back. Those mitts. Those slightly shifting eyes.

For preparing the Criterion Channel installment, thanks as usual to Kim Hendrickson, Grant Delin, Peter Becker, and all their colleagues.

The theatrical tradition is discussed by Alma Law and Mel Gordon in Meyerhold, Eisenstein, and Biomechanics [17] (new ed., McFarland, 2012). On Kuleshov, see Kuleshov on Film [18], ed. Ron Levaco (University of California Press, 1974), pp. 99-115. I discuss Eisenstein’s approach to these problems, what he called mise en geste, in The Cinema of Eisenstein, pp. 144-160.

On actors’ use of eyes, go here [19]; on hands, try this [20]. I’ve discussed Lancaster’s skills before, here [21]. More generally, when it comes to pictorial representation I defend a moderate constructivism against pure relativism here [22]. 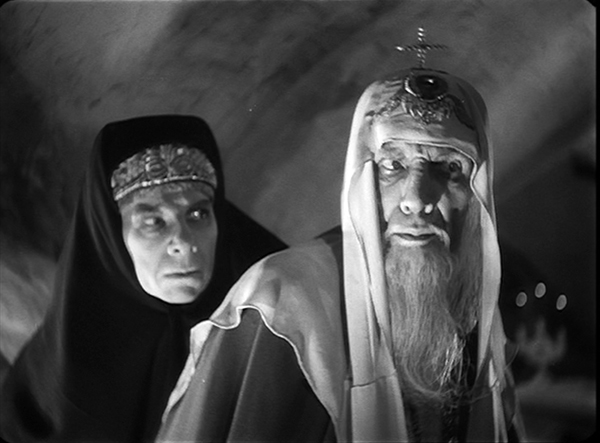