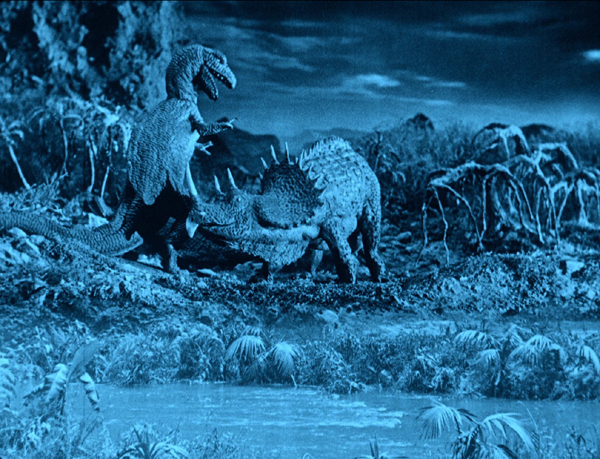 Like just about all kids, I was fascinated by dinosaurs for a while. That’s probably why my mother bought a copy of Sir Arthur Conan Doyle’s 1912 fantasy-adventure novel, The Lost World, at a yard sale and gave it to me to read while I was sick in bed. I must have been about nine. It was a battered photoplay edition, complete with photos of scenes from the 1925 movie. I read other Victorian-Edwardian fantasy-adventure books, mostly Verne and Haggard, at around the same time. I suppose they prepared me for reading The Hobbit and The Lord of the Rings at age 15 and developing a life-long attachment to them. This doesn’t mean that I consider The Lost World a masterpiece, but having come to it so young, I retain a fondness for it. I was interested to find out what the new Flicker Alley release [2]of a new restoration of the film is like.

Doyle’s novel deals with a scholar and explorer, Professor Challenger, who has recently visited a remote site in South America and is ridiculed by all for his claims that dinosaurs survive on an inaccessible plateau there. The hero, Edward Malone, a lovelorn reporter courting a woman who insists she wants a daring, heroic husband, enlists on an expedition to test Challenger’s stories. So does a skeptical rival of Challenger’s, Professor Summerlee, and a hunter-adventurer, Sir John Roxton, who wants to add a stuffed dinosaur to his other trophies. Many adventures follow, including vengeful Spanish guides marooning the expedition atop the plateau, where they encounter dinosaurs, ape-men, and Indians. The team escapes and manages to take a pterodactyl back to London.  Challenger’s reputation is restored.

Following on the novel, I saw the 1960 Irwin Allen version of The Lost World. At the age of perhaps ten or eleven I enjoyed it, though I did recognize that Jill St. John’s character was a total and unnecessary fabrication and the “dinosaurs” were lizards with prostheses. 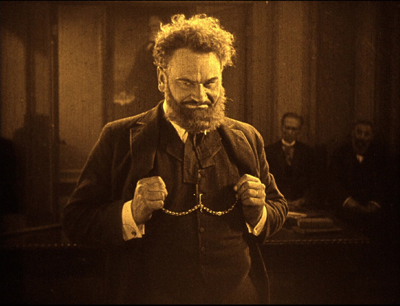 Naturally when I was a grad student in film studies, I took my first opportunity to see the 1925 version. It was produced by the important studio and distributor First National Pictures three years before it was absorbed by the upstart Warner Bros. In those days the only version available was a 50-minute abridgement made by Kodascope, and it was not, to say the least, impressive.

I cannot say that I paid much attention to the subsequent restorations: the 1998 George Eastman House version, which, while still incomplete, was a distinct improvement, and the the 2000 David Shepard version, which was basically the same but with digital improvements to sound and image.

The 2016 restoration by Serge Bromberg’s Lobster Films as presented now on Blu-ray by Flicker Alley, has added considerable footage. This extends the film to 103 minutes, close to its original running time. The main thing missing is a scene of cannibals attacking the expedition members as they travel upriver to the controversial plateau, as well as a few other brief moments.

As an adaptation, it’s a distinct improvement on the 1960 version. After all, the novel was only 13 years old when it was made. Doyle was still alive; he would not publish his final Sherlock Holmes story until 1927 and his final works of fiction until 1929. Conventions and tastes in popular fiction, whether filmic or literary, had not changed nearly as much as they had by Irwin Allen’s day.

The main casting was impeccable, with Wallace Beery the perfect choice for the powerful, pugnacious Challenger (above) and Lewis Stone for the epitome of British stalwart rectitude. The film even managed to do a good job of concocting a love interest by introducing Paula White (Bessie Love), the daughter of the original discoverer of the lost-in-time plateau and eager to participate in an expedition to rescue her marooned father. Then it gave her little to do. Bessie Love just has to look terrified at intervals, in a series of close-ups surrounded by an iris and with a blank background–clearly shot later with someone telling Love just to glance in all directions and register fear. These moments add up to something a realization of a Kuleshov experiment.

Her presence does, however, allow Stone to give perhaps the most subtle and sympathetic performance in the film. He’s in love with White but nobly gives her up to Malone. As Malone, Lloyd Hughes manages to look suitably handsome and impetuous. Arthur Hoyt, older brother of director Harry O. Hoyt), plays Professor Summerlee. His many “little man” roles later included the hotel owner in It Happened One Night, and he was one of Preston Sturges’ regular actors.  (“Looking perpetually befuddled was Hoyt’s stock-in-trade,” as I. S. Mowis puts it in his IMDb biography of Hoyt.) Unfortunately the film exaggerates Summerlee’s somewhat amusing traits, thereby making him a strictly comic character. (One wonders how Claude Rains, so very dissimilar from Beery, could be chosen for the same role in the 1960 version. Casting against type, presumably.)

By the way, although the film seems basically to be set in the Edwardian era of the novel’s original publication, the introduction to the final London portion of the story shows Piccadilly Circus at night, including a movie palace show The Sea Hawk (1924), another First National release that included Wallace Beery and Lloyd Hughes (Malone) its cast. 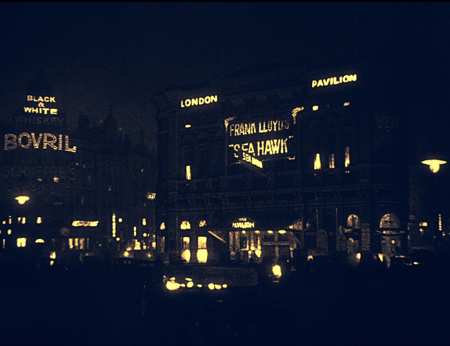 A little synergy that brings the story up to date. 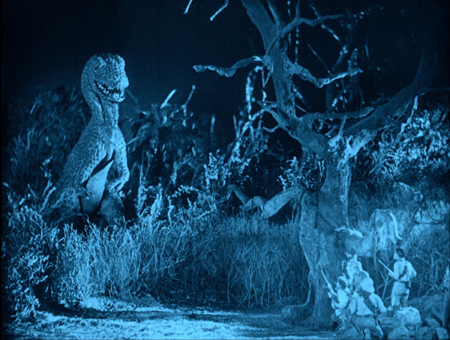 The main attraction of the film, of course, is its technology. Some of it was quite innovative. It is thought to be the first time when the special effects of a feature film were largely accomplished through puppet animation.

There had been earlier puppet films, including Ladislas Starevich [6]‘s realistic creation of artificial insects apparently acting out conventional melodramas. Accomplished though they were, these did not mix live-action with real actors in the same shots, as do the miniature landscapes with the moving dinosaurs.

In The Lost World, combinations usually involve the actors placed in the lower foreground, observing the dinosaurs from varying distances. Atop this section, for example, in a very skillfully done shot, an allosaurus approaches the campsite of the expedition members. The place where the live-action at the lower right joins the miniature set at the upper left is difficult to discern, and the careful lighting of both areas aids in the illusion.

The late scenes of the film, where a brontosaurus escapes into London’s streets and causes panic resorted to a new and complex technology, moving mattes. This device involved using stencils cut for each frame and doubly exposing prints from two negatives. Moving mattes allowed figures filmed separately to be inserted into scenes without the use of superimpositions. The result usually was fairly obvious, betrayed by an evident join line around the added figure. Differences in texture and lighting also caused problems. Still, given the technical limitations of the day, the results are impressive. (The most famous use of moving mattes in this era was probably the reunited couple’s oblivious stroll through traffic in Sunrise [7].) 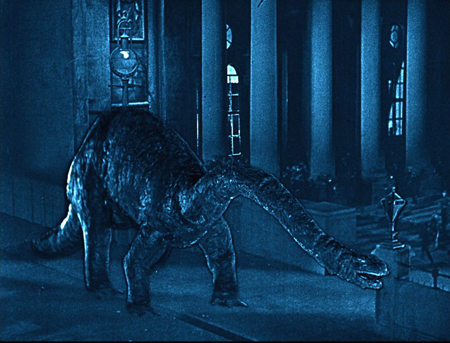 The Lost World drew more heavily on stationary mattes, and for the most part, the technology is pretty convincing. The scene of the allosaurus-triceratops-pterodactyl fight (at the top) contains a stationery matte. The lower part of the frame is a river with plants on the banks swaying in the breeze. About a third of the way up the composition, there is a join to the miniature set in which the action was animated. There the plants are completely stationery, but the movement of the real plants in the lower area gives a degree of verisimilitude to the whole scene. The shot of the team confronting the allosaurus at the top of this section also uses this technique.

Digital copies let us pause and figure out some of O’Brien’s secrets. After the allosaurus has dispatched the unfortunate triceratops seen in the image at the top of this entry, a dramatic moment occurs in a blink-and-you’ll-miss-it flurry of motion as it suddenly snatches a pterodactyl in mid-flight and kills it. Pausing on the action, we can see that O’Brien used wires to support the allosaurus during its leap, as well as nearly invisible wires along which to slide the pterodactyl. I didn’t notice any other scenes in which O’Brien had to resort to visible props. 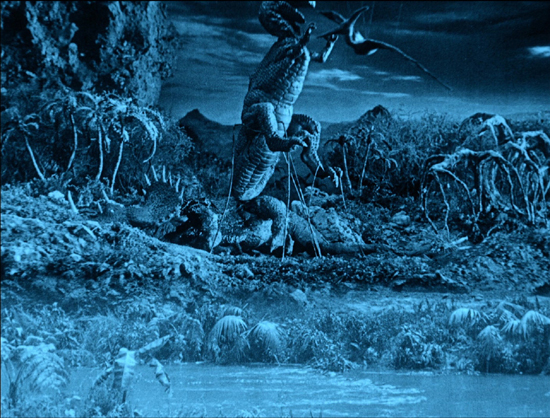 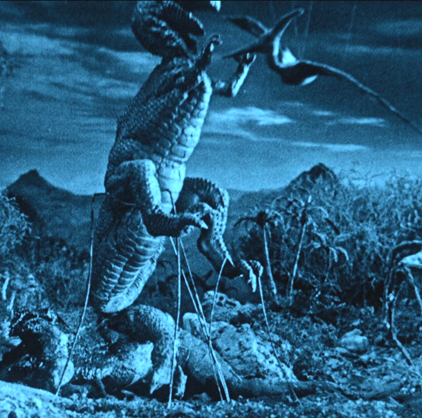 And at least the dinosaurs, unlike King Kong, didn’t have fur that ruffles almost continually, betraying the movements of the animators’ fingers in between exposures of the frames. As a result, the animation in The Lost World almost looks more sophisticated than that of Kong.

Moreover, O’Brien’s puppets, constructions of rubber and foam over metal skeletons, included balloons inside that could have air pumped in and out to simulate breathing. It’s a measure of the man’s inspiration that he realized how much this technique would contribute to the lifelike quality of the dinosaurs.

One of the supplements gives another insight. It is listed as “Deleted scenes,” or outtakes, but occasionally O’Brien or perhaps one of his assistants (the footage is too indistinct to tell which) pops into the image for a few frames, incongruously appearing submerged to his waist in a primordial landscape. 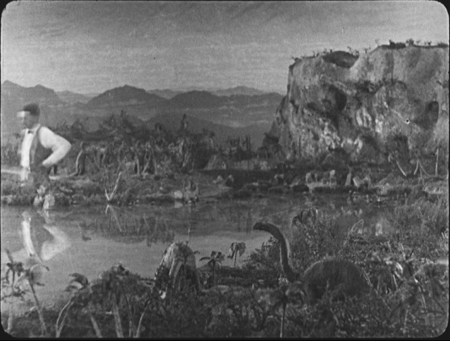 Such images give a sense of the considerable scale of the miniature landscapes and the puppets, as well as the labor involved in this novel endeavor. 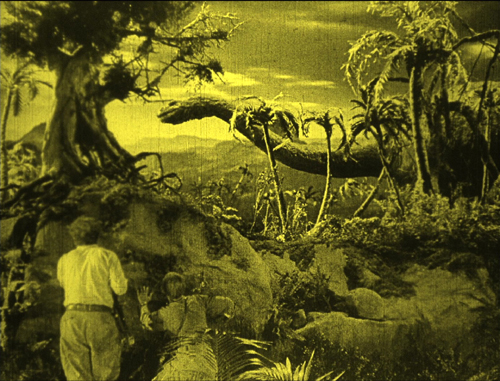 This newest restoration, having been cobbled together from many disparate elements, inevitably is variable in its visual quality. Much of it is splendid, as indicated in most of the images reproduced in this entry, especially the one at the top. Others are clearly worn, with light lines, as in the shot above of Challenger and Summerlee watching a brontosaurus pass in the background. Again a matte shot has been used, its joint probably running along the top of the little sandy ridge behind which the men hide.

The rather poignant scene of the dinosaurs fleeing from a volcanic eruption is unfortunately worn as well. Such stretches, however, are in the minority.

The new version also includes tinting and toning based on recently discovered footage, as well as a brief scene combining red and blue colors when Malone throws a torch into the mouth of an allosaurus to drive it away. 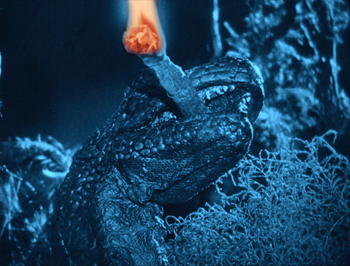 The disc comes with a booklet by Bromberg outlining the extensive restoration work on the versions of The Lost World, as well as the disc’s two musical-track options, one by Robert Israel and one by the Alloy Orchestra. Supplements include a commentary track by Nicolas Ciccone and some short films and clips by O’Brien. The Silent Era website offers a detailed rundown [14] on the many video releases of The Lost World. Once more Lobster Films and Flicker Alley are to be congratulated on another contribution to the retrieval of cinema’s history. 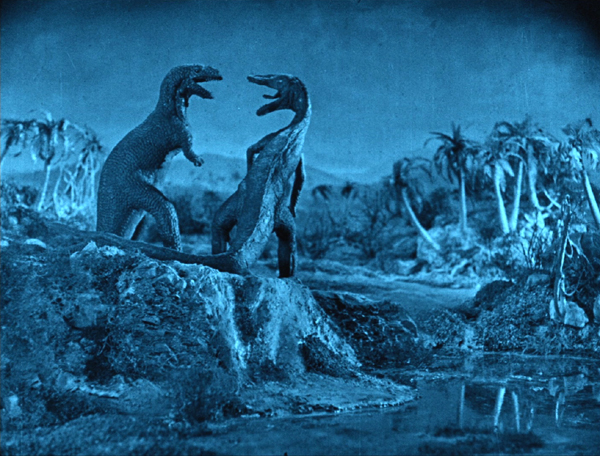