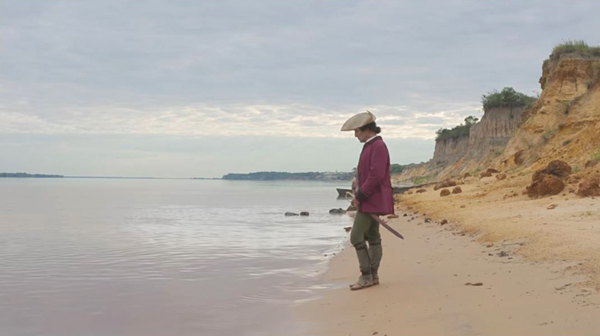 Lucrecia Martel’s Zama (pronounced “sama”) happened to be only the third film we saw at the Venice International Film Festival, on the evening of its first day. As the credits faded, David asked, “Have we just seen a masterpiece?” Neither of us doubted that we had, and we suspected that we had also watched the best film we would see during the entire festival. Of course, we haven’t seen every title on offer here, but having just come back from my twenty-fourth and final film, I don’t doubt that it is.

It is also a challenging film, which we watched a second time to try and grasp the basics of what plot there is. Those of us who admired Martel’s earlier work, particularly The Headless Woman (which we also felt compelled to watch twice, this time at the Vancouver International Film Festival in 2009 and wrote about here [2]), had looked forward to her follow-up film. It was eight years in coming, and it is quite different from her earlier films in several ways.

First, while the three earlier features are set set in modern middle-class milieus, Zama is a period piece. The others had original screenplays, written or co-written by Martel, but Zama is based on a 1956 novel by Antonio Di Benedetto (translated into English in 2016). Martel was also working with a higher budget here, one which required patching together many sources of financing. The result is a co-production involving, Argentina, Spain, France, the Netherlands, the USA, Brazil, Mexico, Portugal, Lebanon, and Switzerland and  a patchwork of sixteen companies. At the press conference (below) Martel said that the long gap between films was not occupied with making all these arrangements and with shooting the film, which was actually a reasonably short process. She did make a few short films during this time and was ill enough to cease working for a while.

The result of the film’s elaborate production situation is not a typical historical epic. There are impressive landscape shots in some scenes, but no uniformed crowds and grand buildings. No vast battles take place; instead there are a few small skirmishes. The bulk of the action takes place in a ramshackle group of buildings thrown up to house the Spanish colonial government of the provincial town of Asunción, already in decline by the 1790s. The money clearly was spent on creating authentic costumes and furnishings, as well as transporting the cast and crew to locations in Paraguay.

Frustrations of a colonial bureaucrat 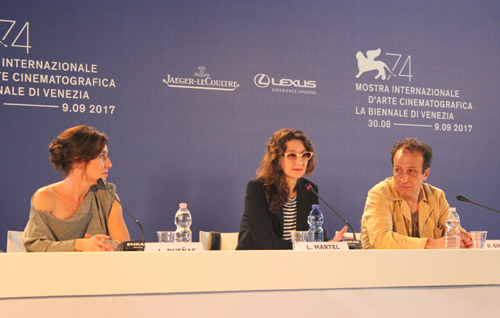 We quickly  learn the story’s basic premise, that Don Diego de Zama is an official stationed in this backwater town and that he fervently longs to be transferred to a more important city–ideally where his wife and children live. He is not in charge of this outpost but serves under a governor whose request to the Spanish crown is necessary for such a transfer.

We are certainly not invited to like Zama when we first meet him. The first shot shows him standing and looking down the river (see top). We later learn that he was probably watching for the boat carrying mail, which he hopes will include a letter from his wife or some official news concerning his situation. He spies on some naked indigenous women smearing themselves with mud, and when they taunt and chase him, he turns on one and slaps her viciously. In the second scene he presides over the torture of a young man who refuses to divulge some unspecified information the governor needs.

As the action proceeds, however, we witness the countless little frustrations, embarrassments, bafflements, slights, and misfortunes that Zama seems to experience constantly. A brandy merchant who arrives with his wares, seemingly one of Zama’s few friends (below), dies suddenly of the plague. Luciana, a wealthy local beauty, teases him with suggestive conversation but ultimately takes a younger man as a lover. A new governor’s arrival hints that Zama is back to square one as far as his hopes for a transfer are concerned. The man takes over Zama’s modest home and office, leaving him to haul his sparse furnishings to a barely habitable inn. When no letter from his wife arrives, Zama imagines a conversation with her in which they lament the long delay in their reunion, though we must suspect that her failure to correspond means that she has given up on him. Through all this we come to sympathize with him. We never learn how long he has been in this posting, but when someone asks he replies glumly, “a long time,” and we believe him. 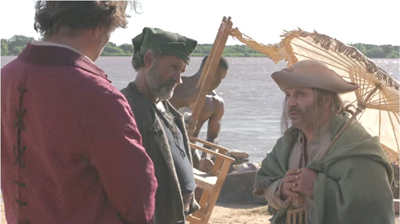 Zama might seem at first to be the epitome of a goal-oriented protagonist, but he is hardly the striving, active Hollywood-style hero. There is nothing he can do to better his current situation or to further his desire for escape. Instead, the action consists of one new, often bizarre challenge after another, creating situations that simply play out, usually to no conclusion. None of these situations furthers Zama’s cause. Gradually we become aware that he is actually losing ground, as when the new governor reveals that he must write not one but two letters to the king, a process that could take a year or two. The final portion of the film takes him in a radically new direction as he tries one desperate bid to gain stature and perhaps his long-delayed transfer, a bid that only leads to worse troubles for him.

There is little sense of how much times passes in the course of this accretion of frustrating incidents. During the press conference (above), the cinematographer Rui Poças and Martel said that they sought a visual way to convey a sense of Zama’s agonizing wait, a way to give “the sensation of time that has stopped,” as Martel put it. They deliberately avoided some of the conventions of historical films. One of these was to eliminate fires and candles. Martel added, “In order to be able to think, you must be deprived of things.” This rule was strictly obeyed, with one shot that turned out to contain a candle flame in the background being eliminated. When one thinks about it, lamps, candles, and fireplaces tend to figure quite prominently in suggesting the past in films, which became particularly evident, for example, when a great deal of fuss was made about the new ability to shoot dark scenes only by candlelight in Kubrick’s Barry Lyndon (1975).

Thinking, being deprived of things 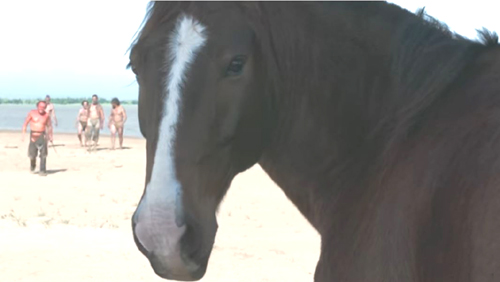 As Martel also pointed out, the original novel was told in the first person by Zama, with few descriptions of locales or nature. The film opens the tale out with the occasional landscape views in the early portions and a move into a savanna setting for its last stretch of action (see bottom). For much of the film, however, Martel uses the style I described in The Headless Woman, ” shooting largely in tight shots filmed with highly selective focus.” We stay almost exclusively with Diego, scanning his face for his reactions, so that the film becomes a psychological study, though the title character is a man who manages to carry on by keeping his thoughts and emotions well hidden.

Mexican actor Daniel Giménez Cacho gives a remarkable performance as Zama. We soon realize that the character has very little understanding of the bizarre things that happen around him and of the attitudes that other people have toward him. At times he adopts the faintest of smiles, ready in case what is being said to him is supposed to be amusing. More often he looks mildly worried, as if expecting another mocking remark or revelation of some new indignity to be offered. In his court his face could be taken to convey an appropriate dignity and wisdom (below), but it might just as well be puzzlement over the case before him. With Luciana he seems passive, but his face conveys hints of lust, hope, and an anticipation of ultimate rejection. In a meeting with a superior official, he struggles to ignore the ludicrous presence of a llama (which we had seen outside when he arrived) wandering around the office behind him as he pleads his case. 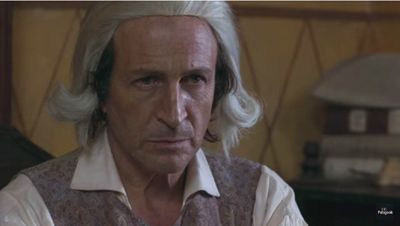 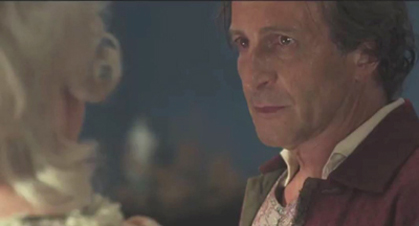 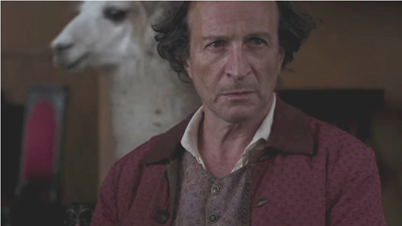 All in all, despite the fact that Cacho’s craggy, earnest face seems to suggest competence, we emerge from the film with no real sense of whether Zama is in fact competent and unfairly treated or simply a man out of his depth who deservedly remains stuck where he is.

One extraordinary moment which I cannot resist mentioning comes late in the film when a horse in the foreground of a scene turns and looks directly into the lens (top of this section). Its stare is even more enigmatic than Zama’s face, just another little mystery that Martel provides.

It is not surprising that Zama was the first in a series of three novels that have come to be called Di Benedetto’s “Trilogy of Expectations.” The second, El silenciero (1964), and third, Los suidicas (1969), share no plot elements with Zama but are thematically linked to it. It is also not surprising to learn that the novelist first read Kafka in 1954, just before writing Zama.

Guy Lodge, in his enthusiastic review for Variety [8], refers to Zama‘s “unjust placement in a non-competition slot at Venice.” It has garnered quite a few reviews as laudatory as Lodge’s, as well as a few which dismissed it as cryptic and not engaging. A good summary of the coverage, regularly updated, is provided by David Hudson [9]. The film deserves to gain a higher profile in its upcoming screenings at the Toronto [10] and New York [11] festivals. Perhaps it will also pick up a North American distributor. Somehow it should be made available on home video (Criterion, perhaps?), since this is going to be considered a classic.

The most detailed account of Di Benedetto’s life and work available online is an essay [12] by the translator of the English-language version, Esther Allen.

Again, we are grateful to the Mostra and those who serve it, particularly Alberto Barbera and Michela Nazzarin. Thanks as well to Peter Cowie and David’s colleagues on the Biennale College Cinema panel, who have all been good company.

[October 1, 2017: Argentina has chosen Zama as its nomination for best-foreign-language Oscar. I doubt it will make it into the final five, given how challenging it is. Still, maybe it will, and in any case, it’s good to see Martel getting respect in her home country.]

[October 16, 2017: Strand Releasing [13] picked up the North American distribution rights for Zama last month, shortly before its American premiere at the New York Film Festival. It plans a theatrical release in early 2018.] 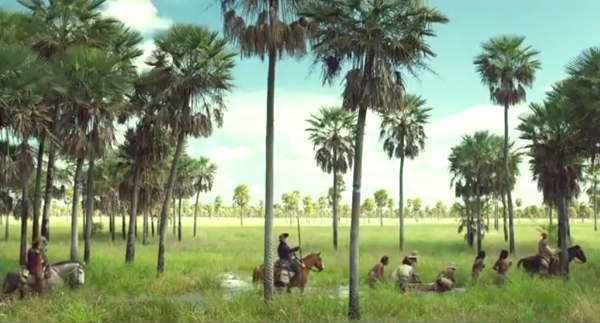