I came to this year’s Venice Film Festival at the invitation of Peter Cowie [2], who has for years run panels of critics and filmmakers at the Mostra. In recent sessions he’s assembled gaggles of critics to respond to films made under the auspices of the Biennale College Cinema [3].

[4]The College supports creative teams making micro-budgeted first or second features. On the basis of treatments and video presentations, the selectors pick out projects that seem feasible and bring twelve teams to fall workshops, where they work with 18 tutors and trainers. This year’s filmmakers all attest to the strong, provocative challenges they got in the workshops. After three or four weeks, each team submits a draft project. On the basis of the drafts, three projects are picked for final support.

Past films that have emerged on the international scene [5]from the competition include Memphis (2014) and The Fits (2015). Last year, explained Sabine Neirotti, coordinator of the initiative, there were 1400 applications. This year, each selected project project got 150,000 euros funding.

As Peter’s statement puts it, the College exists to “support the making of low-budget films in a period of global recession” and to “find youthful auteurs if the cinema is to be reinvigorated.” The purpose of the panel is to give feedback to the filmmakers, particularly about how their work might fit into the world cinema market.

This year’s panel gave me a chance to make some new friends: Ty Burr [6] of the Boston Globe, Glenn Kenny [7] of the New York Times and Some Came Running [8], Chris Vognar [9] of the Dallas Morning News, and Stephanie Zacharek [10] of Time. Kristin and I had already known Justin Chang [11] of the Los Angeles Times. Doing a festival is fun, but doing it with peppy cinephiles like these is even better.

So what about the films? All seemed to me quite good, and each had some very strong moments. All were clearly personal expressions, but each also wanted to communicate vividly with the viewer. All have ripe prospects at festivals and what might lie beyond–home video, streaming, specialty theatrical. And all struck me as having roots in powerful traditions in film history. 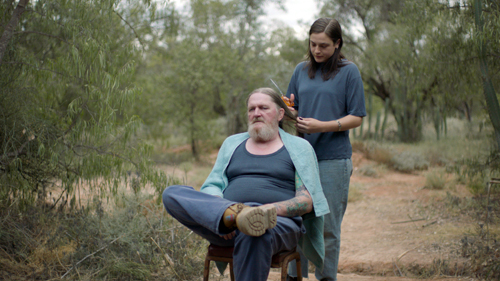 Strange Colours [13], directed by Alena Lodkina, is somewhat akin to American indie regionalism. In the Australian Outback, miners dig for opals, and they live isolated, hard-edged lives. Lean and raggedy coots gripping cans of light beer from dawn to bedtime, shuffling along and muttering through overgrown beards, they might seem an alien tribe. Many confess they came here as a last resort and stayed because they liked the solitude. Eventually, the contours of a genuine, robust community come into focus through the visit of Milena, an outsider who has come on a family mission.

Taking a break from university, Milena is in Lightning Ridge because her father Max has had a heart attack. Lodkina’s script avoids those traumatic flashbacks that often supply backstory. Instead, we get gradual exposition about the past, with some patches left sketchy or unfilled. I infer that Milena left her father very young, so that both he and his world come as a revelation to her, and us.

Plainly Max can’t express affection spontaneously; when Milena arrives at his hospital bed, he berates her. On her off hours, she tries to settle into his ramshackle home, and she meets a younger miner, Frank, with whom she strikes up a tentative friendship. When Max comes out of the hospital, he gruffly explores rebuilding his relationship with Milena. He even reveals he has kept an item from her childhood as an heirloom.

Like the other College films, Strange Colours decorates its main line with poetic asides.  The gleaming opals contrast with the flinty lives of the men who harvest them, while cutaway shots of the starry sky resemble the gems embedded in the labyrinths of the mines. Unexpectedly, Max points Milena to the constellation of Orion; this man who seems so much of the earth is sensitive to the stars as well.

The film is full of incident, but without the plotty propulsion of a conventional family-problems movie. A thief is stealing opals from miners’ claims, but this never creates conventional suspense. The thief meets his fate offscreen. Like her father, Milena is taciturn, and a lot of the film involves her pacing through ever-changing landscapes and encountering characters who reveal themselves in quick strokes.

In a way, Strange Colours carries on the tradition of Neorealism, when as Dwight Macdonald remarked, “The talkies became the walkies.” A character explores an environment at a deliberate pace, and we’re invited along. Lodkina mentioned to me that one inspiration for her was Stromboli, hinging as it does on the idea of a woman plunged into an utterly unfamiliar milieu. Neorealism gave film history a new model of cinematic narrative, and it’s bracing to see young filmmakers continuing to see what that model can yield–or rather, refreshing it for new times and places.

“Our bodies are smarter than our brains,” remarked Mazen Khaled during our panel session. He was referring to his College project, Martyr [15]. At its core is a fait divers: at the Beirut waterfront, a young unemployed man dives off a treacherously high balustrade and drowns. Around this incident Khaled’s team created a sensuous, poignant study of men among men.

An American like me might take the title to refer to a young man caught up in jihad, but it turns out that Islam counts death by drowning as a form of martyrdom as well. This is hinted at in the film’s opening: lyrical imagery of the protagonist Hamad facing the camera, flexing his fingers, and finally floating underwater. The camera probes the textures and edges of his body, both in an abstract space and in the rippling water. Hamad wakes up, suggesting that this has been only a dream, but as Peter Cowie pointed out, it’s more of a prologue, giving us a preview of both the film’s method–patient scrutiny of male bodies–and the plot’s crisis point.

Promising his parents he’ll look for work, Hamad sets out but soon he’s joining his friends at the waterfront. They stretch out, swim, make jokes, and talk of the big dive from the balustrade. Hamad decides to try it, against the warning of his pal. The film enters a zone of floating time, where the moments before, during, and after the dive are gently rearranged and replayed. When he takes the plunge and doesn’t come up, the casual brushing of bodies during sunbathing becomes a desperate, straining mass of grappling arms and bent backs. The twisting torsos of the young men, in images immaculately composed, resemble a sunlit Caravaggio. The homosocial becomes, in death, homoerotic.

What follows is a long cinematic threnody, treating the reactions of Hamad’s family, the preparation of the body, and abstract images on a theatre stage, where figures we’ve seen reenact their roles. Time continues to shift, as images of sun, water, and bodies in space get replayed and reshuffled. Perhaps most vivid is the way that the friends’ patient washing of Hamad’s corpse recalls not only the prologue but strokes and pats we have seen earlier, executed by Hamad and by others.

Martyr is an excellent example of how film form and style reshape the physical realm to create a visual poetry. Thematically, Khaled explains that he wanted to treat this seemingly sorrowful event is a kind of liberation from a life of hopelessness and strife: suspended in water, Hamad seems finally free. At the same time, I saw the film as joining the tradition of Kenneth Anger’s Fireworks, Willard Maas’s Geography of the Body, and Stan Brakhage’s Flesh of Morning–a cinematic exploration of the human body as a landscape, bearing traces of how humans live in and through it.

If Strange Colours resembles a Chekhov play and Martyr suggests a luxuriant lyric poem, Beautiful Things [17] is a sort of symphony. The director, Giorgio Ferrero, is a composer for films and theatre pieces, and he has directed commercials and photo shoots for Nike, Condé Nast, and other companies. His College project has the sleek professionalism you’d expect of someone with this resumé, yet it’s also a monumental four-part critique of the global cycle of commodities, from production and distribution to disposal. The whole thing is staged, shot, and cut with operatic flair and is given, as you’d expect, a galvanizing soundtrack.

The first part, Petrollio, is about oil and is narrated by a driller. Oil is in most products, he tells us; it’s “the blood of the earth” but also the lifeblood of consumers’ lifestyle. Part two, Cargo, is narrated by a worker on a container ship, and he gives us a tour of the vast spaces he works in. Metro (“Meter,” as in music, but also “Measurement,” I suppose) centers on a researcher into anechoic acoustics, probing the sounds that are latent within every manufactured product.

The connections among parts become associative and metaphorical: the researcher’s “coffin” recalls the containers, and his treatment of sounds as acoustic objects runs parallel to the clang of oil drilling and the hum of the ship. A final part, Cenere (“Ashes”), takes us to a recycling plant where a man who designed slot machines now oversees the waste-to-energy chambers. He has learned that “We must burn our own shit.” We see the spidery claw scrunch up all the detritus of capitalism and carry its dangling burden to the flames.

Intercut with these four men are arresting images of their surroundings, treated as abstract landscapes and industrial sculpture. And threaded through each section are scenes of a household stuffed with toys, games, furniture, and the other consumer durables. The couple has gloried in accumulation, and the results are choking them. At the climax, the whole ensemble is blended when a boy (the oil man as a child) treats wrenches as a xylophone, and sounds pile on ferociously, spiraling up to an ethereal audiovisual cadenza. It’s cut off by an epilogue in which our couple dances and play-fights their way through a mall–in search of more beautiful things?

Like any good symphonist, Ferrero knows the power of silence; the soundtrack makes room for dead spots that suggest a world scraped clean of all the clutter. In its knowing combination of movement, color, composition, and musical rhythms and harmonies, Beautiful Things looks back to the “machine music” of Walter Ruttmann’s Melodie der Welt (1929) and other experiments, when the cinematic avant-garde could imagine that films could integrate sound without becoming talkies. This aesthetic surfaced not only in the abstract films of Fischinger but also in Disney’s cartoons, celebrated as the apotheosis of a genuine audiovisual aesthetic. Ferrero is in this tradition. Like an animator, he scripted his soundtrack before shooting his film, timing shots to notes, and he took his inspiration, he tells us, from Fantasia.

All three films have a bright future ahead of them. Actually, the future starts now. You can stream all of them, along with other festival features, at the Venice Sala Web [18], for a small fee, until 19 September. The next 12 submissions have already been picked [19], and the beat goes on.

Participating in the College was a wonderful experience, and I’m grateful to the Mostra and those who serve it, particularly Alberto Barbera, Michela Nazzarin, and Luca Fabris. Thanks as well, of course, to Peter Cowie and my colleagues on the panel.

For more on the audiovisual aesthetic of early sound cinema, see Lea Jacobs’ Film Rhythm after Sound [20] and our review here [21].

P.S. 8 Sept 2017: Thanks to Peter Hourigan for a spelling correction. 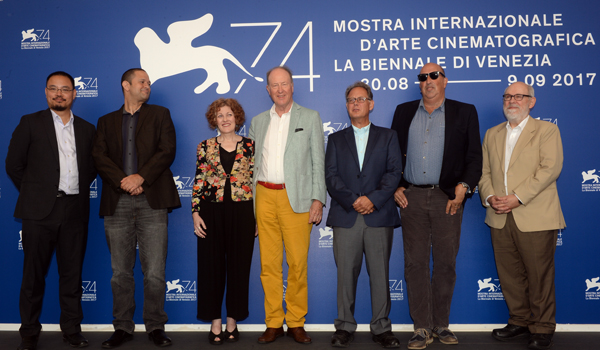