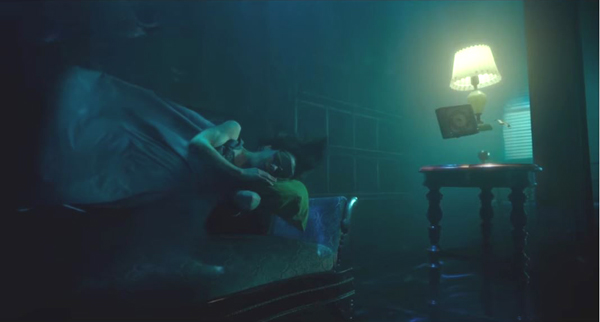 The Shape of Water.

Much attention is generated each year around the Hollywood films that premiere at the big late-summer and autumn festivals, starting with Venice. This year several such films have been launched here in competition for the Leone d’Oro. David has already mentioned Downsizing, and I discuss two more below.

The Shape of Water will be released in the US on December 8, and Three Billboards outside Ebbing, Missouri on November 10. I’ve avoided giving away the endings, but there are definite SPOILERS below–though no bigger than those already present in reviews already published.

As I finish this entry, I am seated in the press room of the festival, surrounded by perhaps a couple of hundred others, all typing away like mad on their computers and tablets and turning out a great deal of coverage of the festival. The press room is a large, extremely high hall in the Casino , the second largest of the 1930s-era buildings used by the festival. It no longer functions as a casino, though there is still a pattern of clubs, hearts, diamonds, and spades on the ceiling in the press-conference room. When the festival is not on, these buildings are usually shut up and left to wait for the next year.

[September 9: Both films bagged one: The Shape of Water has just won the Golden Lion as best picture, and Three Billboards outside Ebbing, Missouri won Best Screenplay.]

The Shape of Water 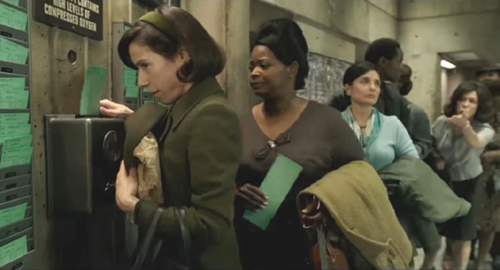 The pre-credits opening of Guillermo del Toro’s The Shape of Water shows the heroine Elisa calmly asleep, floating above a sofa in a somewhat shabbily furnished room entirely underwater (top). We hear a narrator wondering how to tell the story of “the princess without voice.” Elisa, who is a mute cleaning lady employed at a top-secret government lab in the cold-war early 1960s, is not and never becomes a princess in any literal sense. But the phrase marks the film as a fairy story in which the heroine and her true love will rescue each other. (Del Toro avoids the more obvious “Once upon a time …”)

The voice turns out to be that of Giles, a gay down-at-heels artist who is Elisa’s best friend and neighbor. He could not possibly know everything that happens, especially at the end, when his voice similarly describes the outcome. But such narrating figures are common enough, and we must make allowances in a fairy tale.

The other genres that del Toro draws upon are horror and science fiction, but both are definitely subservient to the fairy tale. The source of the horror is reversed here. The amphibious Creature who is brought to the lab and who becomes Elisa’s friend and eventual romantic partner is modeled on the Creature from the Black Lagoon, as del Toro readily admits, but here he is the victim, not the menace. The true monster is Richard Strickland, an agent who picked up “The Asset,” as he and the scientists at the lab call the creature, and he is determined to have him vivisected and disposed of–but not before he has adequate opportunity to torture the Creature with an electric cattle prod. This pastime loses Strickland two fingers, which are grafted back on but gradually go gangrenous, making him seem to degenerate into something monstrous. 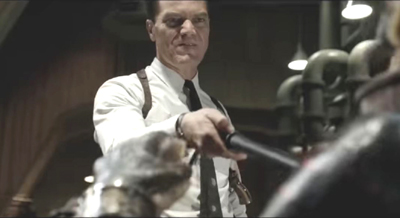 The script of The Shape of Water is elegantly crafted, with motifs wending through it, most obviously the water imagery that pervades the film, from the opening to the skittering drops of water that Elisa traces on the exterior of the bus window. Del Toro also sets up important plot points subtly and clearly. The routine of Elisa and Zelda punching in and out of work at a time clock (top of section) seems mainly a device for showing their friendship and Elisa’s somewhat loose attitude toward rigid deadlines. Later, however, the time on the punched cards ends up providing an important alibi during the investigation of the Creature’s mysterious disappearance from the lab.

Similarly, a comic scene in which janitors and cleaning ladies sneak a smoke while clustered in the blind spot of a nearby surveillance camera motivates Elisa’s later manipulation of such a camera to hide her activities during the rescue scene. The early scene of her boiling eggs to take in her brown-bag lunch leads to the episodes of her offering first a single egg and then multiple eggs to the Creature as she tries to make friends. 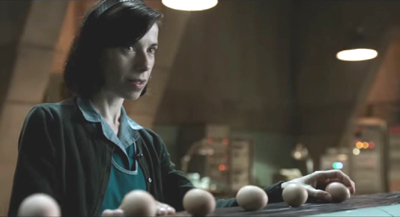 Despite all this, I found it implausible that Elisa, Zelda, and Giles, with a little help from the sympathetic scientist Hofstetler, could remove a major item from a top-secret lab. Here the fairy tale bumps up against the fact that it is set in a sci-fi world. Presumably we must simply assume that in a fairy tale such things can happen.

The music of the film is crucial to the fairy-tale atmosphere. It is entirely evocative of the late 1950s-early 1960s era, and not just in the brief scenes from real Hollywood musicals that would have been showing on TV at the time. At the press conference Alexandre Desplat (who also scored Suburbicon, competing here in Venice) said he wanted to emphasize emotions even while creating a musical flow like water, without emphatic moments. When del Toro, working as usual very quickly, showed Desplat a rough-cut of The Shape of Water a week after shooting ended, the composer referred to Nino Rota and Georges Delerue, two masters from the era of the story who were skilled at creating overtly charming soundtracks. The result is a buoyancy (to continue the water theme) that helps counteract the grimness and threat in many of the scenes.

Much has been made of the fact that del Toro has returned to his low-budget roots after Pacific Rim (at a reported $190 million budget) and Crimson Peak (mid-budget at around $55 million). The Shape of Water, according to del Toro [5], cost around $20 million–a remarkable figure, considering the quality of the CGI and the production design. This feat was achieved in part by the director foregoing his salary and paying for some of the conceptual artwork. (It seems likely that the cast took lower than usual fees in order to work with del Toro.)

Comparing The Shape of Water to del Toro’s masterpiece, Pan’s Labyrinth (made for a reported $19 million), is nearly universal among reviewers, and one can hardly avoid it, even though the earlier film is ultimately far darker. Perhaps it is closer to fairy tales in their original grim forms. As del Toro pointed out at the press conference, fairy tales often originated in times of war, famine, and pestilence and have been softened for modern readers. The Shape of Water never achieves the depths of queasy horror that some scenes of Pan’s Labyrinth contain. Still, it was assigned an R rating by the MPAA and is definitely a fairy tale for adults.

The sharp dialogue in Martin McDonagh’s third feature is funny and poignant by turns. Frances’s McDormand’s tough, vengeful mother Mildred Hayes delivers much of it and drew applause a number of times during the press screening. She begins by hiring the three billboards of the title, seen in a dilapidated state in the foggy opening shots (see bottom). Her simple message appears in three parts: “Raped while dying/And still no arrests/Why, Chief Willoughby?”

As Jason Dixon, a racist, violent, dim-witted police officer (in a scene-stealing performance by Sam Rockwell, above, with Woody Harrelson as Willoughby) observes as he drives by, this is a declaration of war. Mildred spends much of the film badgering, berating, and ultimately attacking the police for what she considers their neglect in investigating the months-old case of her daughter’s rape and murder. Most of the townspeople condemn her billboards tactic and side instead with the likeable, sensible Chief Willoughby, who is especially sympathetic given the fact that he is dying of cancer.

The “war” serves to give us yet another unsavory view of a southern town. Apart from Willoughby, who turns out not to be as inactive concerning the case or unsympathetic toward Mildred’s plight as we might think, most of the characters are unsympathetic to some degree. The other cops do little to stifle Dixon’s outbursts of violence, and Mildred’s ex-husband, who had beaten her and taken up with a pretty nineteen-year-old, disapproves of the billboard tactic. Her son just wants to put his sister’s death behind him.

Mildred herself has been pushed beyond reason by her grief, rejecting Willoughby’s protestation that his investigation has simply failed to turn up any clues, including any DNA matches among local men. Mildred’s response is to demand that he DNA test every male over eight in the town, the county, the state, the country, if necessary. When something is thrown at her car as she drops off her son at school, she actually attacks some kids who claim not to have seen who did it. Willoughby becomes the stabilizing force, and he’s not around long enough to help stave off the escalating conflict.

Three Billboards is a thoroughly entertaining film, but I think there is at least one problem involving the motivation for the presence of a mysterious stranger who becomes a suspect. On the whole the story works well, with some unexpected changes of heart among the characters and an ending that suggests the possibility of healing within the town. Perhaps this is also suggested by the choice of “Ebbing” for the fictitious Missouri town (which was represented by Sylva, Ashville, and other areas in North Carolina).

For those interested in Oscar buzz, I would not be surprised to see Frances McDormand and Sally Hawkins competing again each other in the Best Actress category. You probably did not hear that here first.

Many thanks to Peter Cowie, Alberto Barbera, Michela Lazzarin, and all of their colleagues for inviting and assisting us at this year’s Mostra.