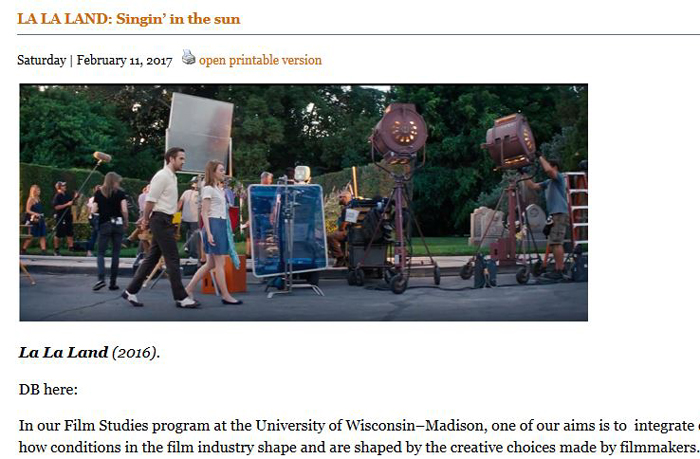 Kristin here–
As each fall semester looms, we provide you with a rundown of entries on our blog that might be useful to teachers and students. They also can be handy for other readers who want to check whether they have missed some entries that might interest them.

We started this blog nearly eleven years ago partly with the idea of providing supplementary material that might be of use to teachers who assign our Film Art: An Introduction textbook. But we don’t make any attempt to tie our entries to the textbook. Each year, however, we naturally deal with film techniques, formal strategies, stylistic choices, norms and transformations of them, and genre conventions, and some of these could be useful in teaching or preparing lectures for specific chapters of Film Art.

“DUNKIRK Part 1: Straight to the good stuff [12]” and “DUNKIRK Part 2: The art film as event movie [13].” These two entries discuss aspects of Christopher Nolan’s film. The first talks about Dunkirk’s minimal exposition, which would be relevant to Chapter 3 (Narrative Form), and the color scheme, which would relate to chapters 4 and 5, on Mise-en-Scene and Cinematography. The second part deals with its genre, as a mixture of the war film and thriller (Chapter 9); it also looks at the film’s temporal scrambling, which relates to Chapters 3 and 6 (Editing).

“Replay it again, Clint: Sully and the simulations [14]” considers some ways of creating complex story-plot relationships, particularly through flashbacks that replayt events. It concentrates on recent Clint Eastwood films and especially Sully.

In “ARRIVAL: When is now? [15]” David looks at that rare phenomenon, the flashforward. He concentrates on Denis Villeneuve’s science-fiction film and its challenges to the viewer.

We have a sneaking suspicion that many teachers will be teaching La La Land. It would work as an accompaniment to several of our chapters in Film Art (narrative, sound, genre, etc.). We’ve blogged about it three times this year. In “How LA LA LAND is made [16],” we analyze the narrative structure and how the songs fit into it (as well as following the classic template of the Broadway musical).

“Fantasy, flashbacks, and what-ifs: 2016 pays off the past [17]” offers a study of depth of narration, particularly in films where our knowledge of the action is largely restricted to that of a single character’s. In some cases there is presentation of the character’s subjective thoughts and memories. Lots of recent films furnish examples.

“Anybody but Griffith [18].” This post also deals with staging, but specifically with a type of staging, often quite elaborate, that was used largely in the period from 1908 to 1920. It depended on sustained takes rather than editing and on the actors’ precise gestures and shiftings of position. David has written quite a lot about it as the “tableau” style. Useful for advanced students or if you’re teaching or studying silent cinema.

“My girl Friday, and his, and yours” is about His Girl Friday [19]. The first section examines the historical sources of the title phrase, while the second part deals at some length with subtleties of staging, both in depth and across the frame.

Chapter 6  The Relation of Shot to Shot: Editing

“Action and essence: Kurosawa’s SANSHIRO SUGATA on the Criterion Channel [22]” examines the “axial cut.” It’s an editing technique that cuts closer and closer to (or, rarely, further away from) its subject straight along the axis of the lens, without a change of angle. It may sound obscure, but it’s actually commoner than you might think. Even The Simpsons uses it occasionally.

“Wisconsin Film Festival: Cutting to the chase, and away from it [23]” examines crosscutting in some recent films.

Chapter 7  Sound in the Cinema

“Spies face the music: Jeff Smith on FOREIGN CORRESPONDENT [25]” analyzes how the musical score of Hitchcock’s film fits into the film’s narrative progression.

“Oscar’s Siren song 3: a guest post by Jeff Smith [26]” examines the wide variety of approaches used in the musical scores of the 2016 Oscar nominees for best score.

“Going inside by staying outside: L’AVVENTURA on the Criterion Channel [27]” examines stylistic changes in Michelangelo Antonioni’s films, particularly relating to staging.

“LA LA LAND: singin’ in the sun [28]” has three guest experts on musicals discussing the conventions and innovations of La La Land.

For those who teach film noir (and quite a few of you do) might want to look at “Film noir, a hundred years ago [29].” It gives numerous examples of “film noir” lighting in films of the 1910s. This could also be used for low-key lighting in Chapter 4.

“Thrill me! [30]” discusses the recent prevalence of the thriller movie, even among art-cinema directors.

“Murnau before NOSFERATU [32]” could be useful in teaching the silent-German section of this chapter or if you show any early Murnau film. There’s nothing on Expressionism but quite a few examples from major German films of the late 1910s and early 1920s, primarily the restored Der Gang in der Nacht (1921).

“The ten best films of … 1926 [33]” is the latest in our annual attempt to call attention to the classics of the silent era, both famous and obscure. This year’s list covers several countries’ films, including Japan for the first time.

If you supervise dissertations or are writing a book yourself, you might be interested in seeing how David went about researching his forthcoming book, Reinventing Hollywood [34]. Complete with exciting photos of boxes of file folders. See his “Oof! Out! [35]”

Every now and then we post a wrap-up of recent DVDs and Blu-rays. “Silents nights: Stocking-stuffers for those long winter evenings, the sequel [36]” concentrates on two releases, one a beautiful restoration of a well-known classic and one a rediscovery of a Native-American feature.

“OBSERVATIONS goes all FILMSTRUCK [37].” For those of you using the rich foreign and indie offerings of streaming service FilmStruck [38] for teaching, class preparation, or personal pleasure, we have an introduction to our contribution to the supplements thereon. Our series of introductions to films, [39] “Observations on Film Art” is, as its name suggests, a sort of extension of this blog. We do close analysis of a specific topic in one or two films, complete with more clips than we could possibly use in our entries here.

Finally, if readers, teachers, and students are curious about how Film Art came to be written, that comes up in our SCMS interview with Charlie Keil, linked in this blog entry [40].