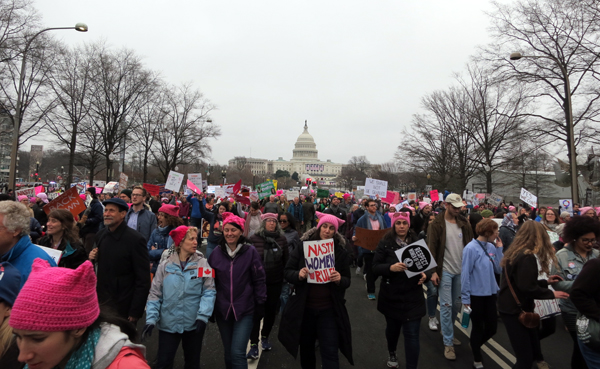 Dale said, “Right there’s where Donald Trump lives.”
Elvin said, “Is that right? Who’s Donald Trump?”
Before they ate and were driving around West Palm, Dale had pointed out the building Barnett Bank was in, its shiny black glass rising above old structures around it, and said, “You know what they call that building? Darth Vader.” And Elvin had said, “Who’s Darth Vader?” Dale could see how he might not have heard of Donald Trump in prison, but everybody in the world knew who Darth Vader was. Either one, though, was hard to explain, so Dale let it go. Elvin wasn’t interested anyway.

I’ve wrestled with this blog entry for some weeks; at one point it was 15,000 words. I wanted to, once but maybe not for all, get some political thoughts off my chest. But events in Washington, DC, where I’m in residence for the next few months, have rolled along so fast that every day supplied a whole new set of actions to denounce. Yesterday: President Trump™ brings his unique comedy stylings [2] to Black History Month. Today we get letting churches talk politics [3]. Me, I’m in favor of taxing churches and in exchange letting them say anything they want.

In sum, my mental state matches one placard at the Women’s March: “All my objections to Trump won’t fit on one sign.”

My long-form draft of this entry railed at the crumbling of the Democratic party and its failure in its first duty, to protect us from authoritarianism. It lamented Bill Clinton’s lack of personal honor (erections have consequences), which led him to cling to office rather than resigning, turning things over to Gore, and possibly retaining the White House in 2000. This admittedly somewhat rantish draft pointed out that the Republicans’ unjustified invasion of Iraq led, rather directly, to the rise of Middle Eastern terrorism and the flood of refugees, a turmoil which the Republicans have in turn exploited endlessly for their benefit.

My epic draft noted the spectacle of Republican candidates whom Trump insulted scrambling to do his bidding and waving off conduct that they wouldn’t tolerate from their swaggering teenaged sons. And the saga suggested that the Democrats, for all their weaknesses and equivocations and compromises and corruption, do harbor some number who want to widen the circle of people who deserve to be treated with dignity.

The long version also turned a cold eye toward the recent wave of journalists’ expeditions from the Coasts to report on and empathize with the Forgotten American. Nobody from the boondocks I lived in for eighteen years (an in-depth longitudinal study) ever evinced any curiosity about the ideas of the liberals they despised. Frequent visits back home showed no further stirrings of curiosity about the world, just as today I see no efforts to empathize coming from Trump’s jeering mobs. By contrast, many liberals strive to widen the circle of understanding, and this allows them to be played for suckers again and again.

So I feel that I just have to stop fiddling with the damn thing and boil it down to something digestible and for the moment. In my view, President Trump™ is openly laying the groundwork for a corrupt, authoritarian state. He is doing so with the complicity of both establishment and Tea Party Republicans, who have all long ago given up any vestige of principle. Wholly interested in holding absolute power, they are prepared to back up the most trivial, baldfaced lies and the most outrageous violations of liberty and decency.

Trump has created within the White House a cadre of supplicant–Svengalis who will steer him toward policies I can only regard as despotic. In the first days of his regime, the strategy is clear. He will occupy the forestage, gibbering and gesticulating to grab the news cycle, while behind the scenes a blitzkrieg of intolerance, repression, fear, kleptocracy, and pain will roll across our land. He’s a petty tyrant, but people will be so distracted by the pettiness that they’ll forget he’s a tyrant.

All this has been said, and better, elsewhere. It’s being said every day, in plainer and plainer language. Once H. L. Mencken could write:

A Washington correspondent is one with a special talent for failing to see what is before his eyes. I have beheld a whole herd of them sit through a national convention without once laughing.

That held more or less true until a couple of months ago, when we started to see the press call lies lies. Every morning brings out more writers willing to point to a naked emperor. Most surprising to me is arch Neocon David Frum, with whom I’ve never agreed on anything, writing an eloquent, wide-ranging critique [4] everyone should read.

A president who plausibly owes his office at least in part to a clandestine intervention by a hostile foreign intelligence service? Who uses the bully pulpit to target individual critics? Who creates blind trusts that are not blind, invites his children to commingle private and public business, and somehow gets the unhappy members of his own political party either to endorse his choices or shrug them off? If this were happening in Honduras, we’d know what to call it.

Coup is now the most important four-letter word in American politics. Arguably, the thing began when the Republicans refused to follow custom and launch hearings on Obama’s Supreme Court nominee, Merrick Garland. It intensified during the campaign cycle, crystallized during the election, and began to show itself fully during the first couple weeks of President Trump™.

If anything shows the failure of America’s two-party system, it’s the feeble response to the Republicans’ power grab. (Democrats are relentless only in asking for donations.) The analyses of Thomas Frank [5] and Chris Hayes [6] and Matt Taibbi [7] ring true enough; the Clinton machine took huge swaths of the population for granted and saw its ultimate constituency as the plutocrats and the meritocracy.

Still, the bulk of the blame lies with the voters. Granted that many suffer from the economic inequality created by globalization. It’s not their fault that the US lacks an educational system and a welfare state capable of absorbing the shocks of such massive technological change. But many Trump voters are not disadvantaged. A Gallup poll [8] found that support for Trump was strongest in areas less damaged by globalization. (Racial bias seems to be a stronger correlative [9].)

Whatever the causes, there’s no blinking the fact. Between a demagogic voluptuary and a candidate whose moral obtuseness was matched by tactical incompetence, sixty-two million American adults chose recklessly. They acted in a way that was demonstrably mischievous, stupid, ignorant, selfish, bigoted, cruel, and hateful.

Some may be having second thoughts [10], but millions still rejoice in the looming whirlwind. For the rest of us, resistance on every front is the only option.

But you go crazy if you sink into every news cycle. Most of us need time off from anger and marching and signing petitions and calling Congresscritters. Cinema still matters. We’ll be back with film-related conversation soon. 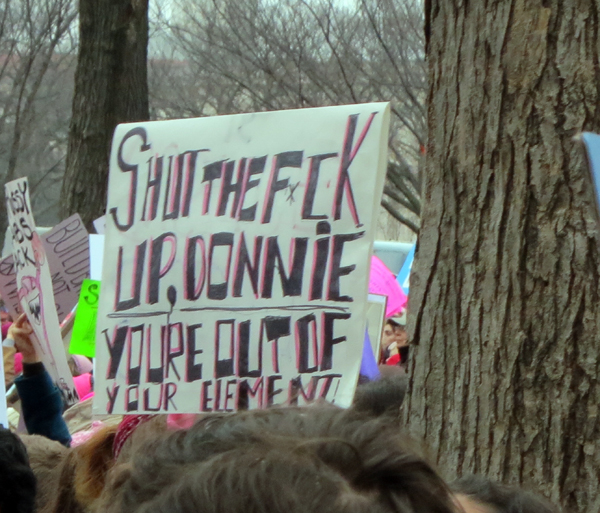