From the Vancouver International Film Festival [3], I write on two new films you should see as soon as you can.

How to make a film respecting the power of poetry? More basically: What is that power? Does it lie in the fact that poetry can be a part of ordinary life? This seems to me the angle taken in Jim Jarmusch’s Paterson. Or does poetry’s power arise as an alternative to mundane intercourse, a realm in which we test thoughts and feelings beyond the flow of daily life? I think this is the angle taken in Terence Davies’ A Quiet Passion. 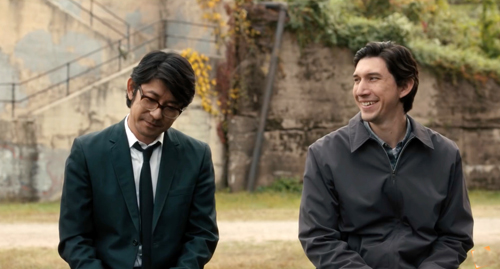 Paterson drives a bus in Paterson. The bus’s destination display bears not a street name but rather the word “Paterson.” Such playful quirks, long a part of the American indie game, is as inoffensive as the film’s title (Paterson, of course). The milieu looks prosaic enough, with quasi-documentary shots of streets and the Great Falls. But Paterson owns a bungalow on a bus-driver’s salary, catches a 1930s horror film at a local theatre, and drops in at a saloon where a barkeep named Doc plays chess with himself. The town has more than its share of twins too.

In this slightly off-track version of a city, the protagonist’s Iranian-American wife Laura paints fabrics, bakes designer cupcakes, and wants to be a country singer. Meanwhile, Paterson has creative impulses of his own. He writes poetry.

Paterson is a quiet, genial fellow to whom you’d happily entrust your morning commute. His poems (written by New York School poet Ron Padgett) are conversational; the first one we hear begins: “We have plenty of matches in our house.” [5] The poems are given their force by their homely details and the repetition of simple declarative phrases.

Repetition is built into the film’s block construction [6]: A Week in the Life. Waking up, having breakfast, walking to the bus terminal, jotting down some verse before beginning his routes, lunch and more jotting, walking home, eating dinner, and visiting the bar—Paterson ‘s routines create a rhythmic matrix that we quickly learn. That the film’s structure is built around work routines makes sense. In America, a poet might be your bus driver, your doctor (William Carlos Williams), your insurance executive (Wallace Stevens), the farmer down the road (Robert Frost), or your teacher in business school (Marianne Moore).

As for poetic texture, the routines get treated in small-scale variations. Take the opening bed shot, an overhead view of the couple that announces a new day. One morning Laura isn’t there. Sometimes we don’t get a shot of Paterson checking his wristwatch. The weekend mornings lack the daily written title that the workdays get. A poetic principle of verse and refrain gets built into the film’s structure. 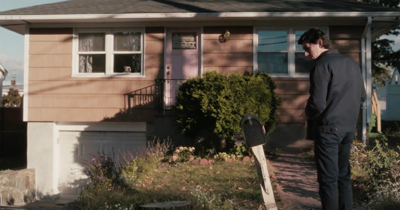 Finer-grain texture comes in the recitation of the verses as Paterson writes them into his scruffy notebook. We see the lines form on the surface of the screen, in freehand script, while montages of driving surge underneath them–as if these were coming to life in the course of the day. The fate of the secret notebook is probably the biggest dramatic twist in the film, but even that becomes part of a larger pattern after a melancholy Sunday walk.

And drama? There are moments of tension. Paterson is unenthusiastic about Laura’s buying a guitar, and an habitué of the bar seems to create a life-or-death crisis. Yet these and other problems slide away quickly. When Saturday night comes around, a kind of climax occurs. It tails off, subsumed in the playing out of motifs that were installed early on—rhymes, we might say.

As you’d expect in a film living under the aegis of Williams (author, of course, of Paterson the book of verse), it’s all about the discrimination of detail. “No ideas but in things” is the motto. The emblem becomes the Ohio Blue Tip Matches described in Padgett’s poem and shown to us in close-up. Laura reveals her poetic acumen when she asks if Paterson’s verse mentions the megaphone skew of the label’s lettering.

Paterson may write alongside a waterfall like a classic poet inspired by nature’s sublimity. But in tuning his ear to his passengers’ conversations and by finding epiphanies in mass-manufactured objects, he’s in the American grain.

[8]
Paterson is so unassuming in his creativity that his film might have been called A Quiet Passion. That, though, is the title of Terence Davies’ tribute to Emily Dickinson. But not much about her is presented as quiet. The film starts with the tart young Emily declining to accept a place in Mt. Holyoke’s pious “ark of safety.” She prefers the soaring rapture of Bellini’s “Come per me sereno,” a bride’s thank-you to guests at her wedding. While her family listens politely in their concert-theatre box, she sways in sympathy with the singer. The scene seals her pledge to art.

Any biopic of the Belle of Amherst faces the problem of characterizing her through talk and action. One option is to make her meek and introspective. Another is to make her conversation as diffuse, oblique, and staccato as her verse. Davies has boldly tried another tack. He has made her one of a trio of eloquent women who swap epigrams as swiftly as if they were in an opera or an Oscar Wilde play. Davies seems to be suggesting that worldly (and wordy) banter with her kindly sister Lavinia and racier friend Miss Buffam gave Emily a sense of the blunt force of language.

Paterson is laconic and ruminative, like his verses, but Emily is a parlor dialectician. She hammers fierce comebacks at her father, at her brother (especially when he takes a mistress), and even at the devoted Vinnie. What authority she gains in her closed society emerges mostly from her wit and tongue. (Though she can calmly smash a plate too.) At the same time, Emily knows her words can wound. She’s miserable after snapping at the family servants, and after a volatile exchange with Vinnie she despairs of ever being a good person.

Here is a woman who feels the power and pain of language. Once we understand that, we’re better prepared to understand the inward turn of her verse. Unlike her dueling conversations, her poems are skewed and slanted, with unexpected jumps at every line, or dash. They twist nursery-rhyme cadences and simple vocabulary into Donne-like knots of phrasing. The film’s voice-over recitations make the verse even more elusive than on the page, but I don’t know how else Davies could have handled them. Even showing the lines as they emerge, as Paterson does with superimposed writing, wouldn’t fully satisfy. We need time to ponder the impacted syntax on display. I suspect that instead of trying to translate the perplexing force of Dickinson’s verse, Davies’ film exists as a parallel text, a supplement urging viewers to return to the poems after witnessing Emily’s socializing and suffering.

Familiar Davies themes emerge. Fiery spirituality clashes with hypocritical churchifying; family ties are fulfilling but also suffocating; a single room can enclose peace or stabbing pain. There’s the power of women’s friendships, alliances against a world bent on cutting them down. Davies reminds us that “women’s art” often involves handicraft. Emily is not only writer but book-maker, trimming and stitching little pages together into secular devotionals. These mini-books recall and mock those pious guides for meditation that could be tucked into purses and waistcoats.

Paterson writes in the daytime, while waiting to pull the bus out of the garage or on his lunch hour or even while driving. Emily, once her father gives his permission, writes from 3 AM into the morning. Accordingly, the bus driver’s poems, like those of Williams, have the evenly-lit clarity, if not the compression, of a haiku, while Emily’s verses, haltingly phrased, move in a hallucinatory blur. Jarmusch’s no-fuss staging and editing suit the unassertive texture of the verse and the driver’s days, while Davies, himself something of a chamber artist and a master of the musicalized image, scans his parlor tableaux with lush gravity.

Two films, each one both light and grave, adroit and solemn, though in different registers. Whatever cinematic poetry is, they aspire to it.

Michael Koresky has a superb discussion [10] of Paterson at Reverse Shot, the Museum of the Moving Image site.

Note for the theoretically inclined: Paterson‘s structured routines and substitution-slots interestingly conform to Roman Jakobson’s dictum that the poetic function consists of the projection of the paradigmatic axis of language (alternative lexical items) onto the syntagmatic axis (the linear flow) of a text. See his “Closing Statement: Linguistics and Poetics [11].”

Another entry on this site [12] considers Davies’ Sunset Song and his other films. As Moonrise Kingdom is one of our blog’s favorite recent films [13], it’s a pleasure to glimpse Jared Gilman and Kara Hayward as kids bringing anarchy to Paterson, N. J. 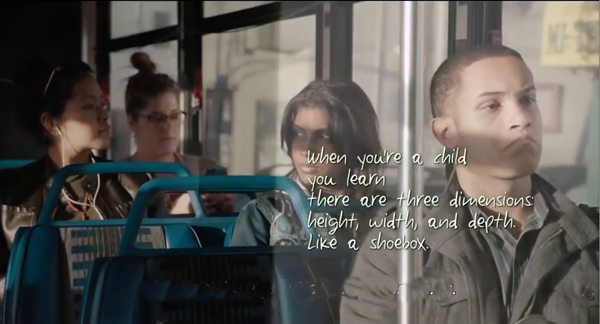