By now everybody knows that Tarantino’s forthcoming The Hateful Eight was shot on film in the Ultra Panavision 70 format. This anamorphic widescreen process yields a projected aspect ratio of 2.76–in a word, humongous. An early version of it, MGM Camera 65, was employed on Ben-Hur (1959), but Panavision quickly developed a new generation of cameras and renamed the process. It wasn’t heavily used; supposedly Khartoum (1966) was the last film shot in the format.

The process by which Tarantino, ace cinematographer Robert Richardson, and the enthusiastic boffins at Panavision revived Ultra Panavision 70 is detailed  in the current American Cinematographer [2] (alas, not yet online). The production is an extraordinary tale. But what about exhibition? Luckily, the widescreen fans among us can glean a lot about that from veteran projectionist Paul Rayton’s interview with Chapin Cutler [3], co-owner of Boston Light & Sound [4]. It was the task of Chapin and his team to find over 100 projectors, refurbish them, test them, and set them up in theatres all over America.

Chapin is a legendary figure in movie exhibition. Trained as a projectionist during his college years, he and Larry Shaw have made BL&S one of the very top companies for installation and maintenance of theatre projection equipment. He has supervised theatrical setups at festivals (Sundance, Telluride, TCM), industry gatherings (CinemaCon), and at some of the world’s top-notch theatres.

He’s more than a professional’s professional: He loves film and prides himself on delivering a powerhouse show. He was a natural choice for a movie geek like Tarantino to arrange the roadshow screenings of The Hateful Eight.

Chapin has discussed the nearly military precision necessary to fulfill Tarantino’s mandate in The New York Times [5] and The Boston Globe [6]. You should read these pieces for essential background. When Chapin added some new information courtesy of the listserv of the Art House Convergence [7], I jumped at the chance to include you in the audience. I know that many of our readers are keen to devour whatever they can learn about this film, one of the year’s major American releases.

So here are Chapin’s notes on how you prepare and ship out 100+ 70mm film prints.

For those of you that are interested in these things, attached is a picture of our “platter farm” in Valencia CA. This is where all the prints are being made up.

The space before, in Academy ratio. 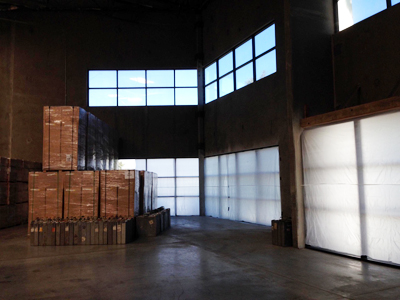 The space after, in sort of Ultra Panavision.

About 90 of the prints will be made up for platter operation and shipped totally assembled. The prints are being ultrasonically welded so that it is one continuous piece of film; no splices. The remaining prints are going out for reel to reel houses.

On the right of the frame above you can see part of one of the shipping cases. It is 5 ft. x 5 ft. by 1 ft. thick. When loaded, it weighs about 400 lbs. On the platter next to it, there is a partially disassembled platter reel. With the reel full, out of the box, the film and reel weigh about 250 lbs. Four people can easily lift it onto a platter deck.

We have a dedicated team of four folks working 7 days a week to get this done.

All this makes you appreciate the effort behind the scenes that makes this remarkable enterprise work. (So far, there have been a couple of problematic press screenings, but a dozen or so other shows–notably last night’s SAG screening [9] at the Egyptian–have gone off perfectly.) Whatever you think of Tarantino as a filmmaker (I like him [10]), he deserves credit for exposing a new generation to the volcanic fun of a roadshow presentation. And we should thank Chapin, the guru with the bandit mustache, as well.