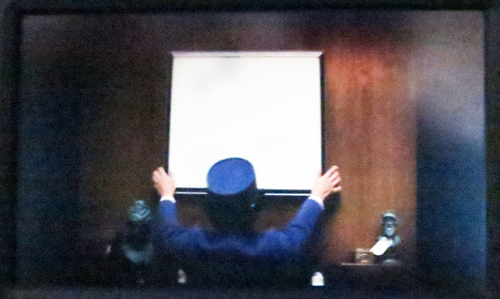 Even doggedly determined readers of this blog may not have seen the codicil to my infuriatingly long entry [2] on The Grand Budapest Hotel. I revisit those remarks now, only because coming back from my trip to Yurrrp, I have evidence of a version that many cinephiles may not see. Here’s what I appended to the old post:

Flying back, diligent film researcher that I am, I took a shot of the bowdlerized image. My questions remain. I could imagine it as an Anderson joke, but also as a default for a censorious post-production.

Sorry about the image quality. No way to take a frame enlargement.