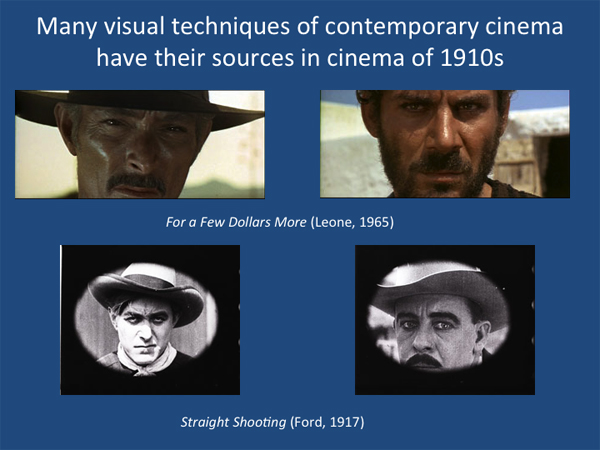 We’ve said several times that this website is an ongoing experiment. We started just by posting my CV and essays supplementing my books. Then came blogs. We quickly added illustrations to our entries, mostly  frame enlargements and grabs. Eventually, video crept in. In 2011 we ran Tim Smith’s dissection of eye-scanning [2] in There Will Be Blood. Last year, in coordination with our new edition of Film Art: An Introduction [3], we added online clips-plus-commentary (an example [4] is on Criterion’s YouTube channel), and near the end of the year Erik Gunneson and I mounted a video essay [5] on techniques of constructive editing.

Today something new has been added. I’ve decided to retire some of the lectures I take on the road, and I’ll put them up as video lectures. They’re sort of Net substitutes for my show-and-tells about aspects of film that interest me. The first is called “How Motion Pictures Became the Movies,” and it’s devoted to what is for me the crucial period 1908-1920. It quickly surveys what was going on in cinema over those years before zeroing in on the key stylistic developments we’ve often written about here: the emergence of continuity editing and the brief but brilliant exploration of tableau staging.

The lecture isn’t a record of me pacing around talking. Rather, it’s a PowerPoint presentation that runs as a video, with my scratchy voice-over. I didn’t write a text, but rather talked it through as if I were presenting it live. It nakedly exposes my mannerisms and bad habits, but I hope they don’t get in the way of your enjoyment.

“How Motion Pictures Became the Movies” is designed for general audiences. I’ve built in comments for specialists too, in particular, some indications of different research approaches to understanding this period of change.

The talk runs just under 70 minutes, and it’s suitable for use in classes if people are inclined. I think it might be helpful in surveys of film history, courses on silent cinema, and courses on film analysis. If a teacher wants to break it into two parts, there’s a natural stopping point around the 35-minute mark.

Some slides have several images laid out comic-strip fashion, so the presentation plays best on a midsize display, like a desktop or biggish laptop. A couple of tests suggest that it looks okay projected for a group, but the instructor planning to screen it for a class should experiment first.

I plan to put up other lectures in a similar format, with HD capabilities. Next up is probably a talk about the aesthetics of early CinemaScope. I’d then like to spin off this current one and offer three 30-minute ones that go into more depth on developments in the 1910s.

The video is available at the bottom of this entry, but it’s also available on this page [6]. There I provide a bibliography of the sources I mention in the course of the talk, as well as links to relevant blogs and essays elsewhere on the site.

If you find this interesting or worthwhile, please let your friends know about it. I don’t do Twitter or Facebook, but Kristin participates in the latter, and we can monitor tweets. Thanks to Erik for his dedication to this most recent task, and to all our readers for their support over the years.