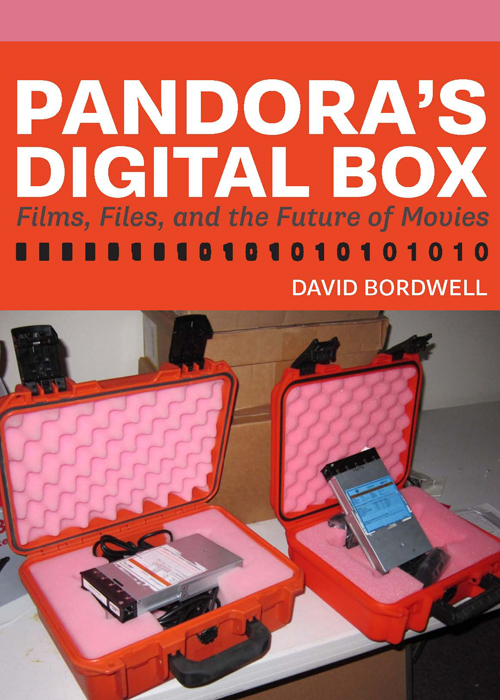 Looking back at Kristin’s and my ventures online, I see a gradually expanding series of experiments. Step by step, maybe too cautiously, we’ve moved toward what you might call “para-academic” film writing–a way of getting ideas, information, and opinions out to a film-enthusiast readership whom we hadn’t reached with our earlier work. (Although we’re happy when academics take note of what we do.)

Today we have a new experiment to try. Pandora’s Digital Box: Films, Files, and the Future of Movies is now available here [2]. Backstory follows.

Baby steps, then longer ones 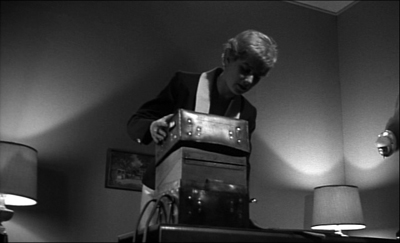 To take another metaphor, we’ve been gradually exploring various niches in the online ecosystem. At first, back in 2000, knowing almost nothing about cyberculture, I dumped my vitae and a little essay onto my brand-new Geocities site. Later I saw the site mainly as a supplement to print publication, a way to add and correct things I’d written in my books Figures Traced in Light (2004) and The Way Hollywood Tells It (2005), along with material we’d included in our textbooks Film Art and Film History. By then I had retired from teaching.

I started to write more online. I began posting long, stand-alone pieces that I couldn’t imagine any journal or anthology publishing. (They’re in the list on the left-hand column of this page.) Somewhere around 2007, after finishing the collection Poetics of Cinema, I made Web publishing my primary expressive vehicle. So when I was asked to write pieces for various occasions, I tried to secure permission to publish them here as well. They too have wound up in the line-up on the left– a little essay on Paolo Gioli, one on Shaw Brothers’ widescreen cinema, and a liner note about The Mad Detective for the Masters of Cinema DVD line [4]. There are more to come in this vein, including a historical survey of how film theorists have drawn ideas from psychological research.

While moving to fill the essayistic niche, we saw archival and revival opportunities as well. Thanks to Markus Nornes, I was able to republish the out-of-print Ozu and the Poetics of Cinema in a downloadable pdf version, with color illustrations. That’s on the University of Michigan Press site. Vito Adiraensens, who made a pdf of Kristin’s Exporting Entertainment, allowed us to post that on our site.

At this point, whole books we’ve done were available online. But those were straight reprints. The next logical step was to offer a revised edition. After the rights to Planet Hong Kong (2000) reverted to me, I decided to update and expand it and add color illustrations. I also decided to ask for money, making PHK 2.0 the only item on the site that wasn’t free. That was an experiment too, to see if the year I spent reshaping it might yield some payback. It did; so far, the sales have covered the costs of design and yielded me a little for my efforts.

Meanwhile we’ve explored the blog niche. Started in 2006, refreshed once or twice a week, our blog has become greatly satisfying to us. This entry is number 499. We’ve treated the blog wing of the site as a sort of magazine, with each entry as a feature or column or festival report or book notes. We write about anything cinematic, old or new, that interests us. The freedom is exhilarating, and we don’t lack ideas. I have a desk drawer’s worth of folders on topics I want to explore.

Nearly all of these are long-form endeavors. Some run to 6000 words. Even our festival reports, which could have been emitted in a flurry of communiqués, are blended into spacious pieces that permit us to compare films or develop a common theme. At a time when everyone declares that attention spans have shrunk to pinpoints, readers have been very patient with us. People still visit our blog, recommend it to others, and even Facebook and Tweet about it. Roger Ebert has been an especially generous supporter. Thanks to the efforts of Rodney Powell of the University of Chicago Press, we gathered some of our entries into a book, a “real” one called Minding Movies, and I’d hope that the length and contextual depth of the pieces gave them some bookish solidity.

Another niche coming up: As virtual books have found a public, I’ve made a book designed primarily for an e-reader. 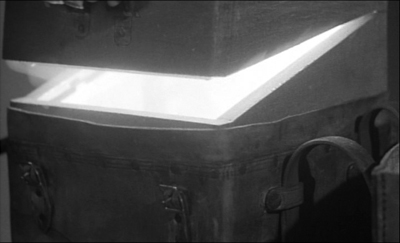 Last fall, after realizing the scope of the digital conversion of movie theatres, I decided to write a series of blogs about it. I had no fixed number in mind, but I didn’t expect it to run as long as it did. I kept learning more, so the series, called Pandora’s Digital Box, stretched from December through March. I was encouraged by people who praised it in blogs and on social media. I decided to try to build a book out of the pieces.

Some people think that this is silly. One reviewer of our blog book, Minding Movies, wondered why anyone would buy something that’s available for free. More alert reviewers, like Scott Foundas of Film Comment (May/June 2011), understood that some readers don’t like to read long-form prose online, or don’t like zigzagging through the labyrinth that is our site, or want some guidance in selecting what to pay attention to. Moreover, by gathering items topically, the book suggested recurring themes and an overall frame of reference governing what we do. The broad aims of our enterprise aren’t apparent in a daily skim of each entry.

Still, Minding Movies was a varied mixture. Pandora was from the start a more focused series. And we added no new essays for our collection, but I had quite a bit more to say about the digital conversion. So I cooked up new rules for my latest experiment.

1. The original entries wouldn’t be taken down. As with Minding Movies, the entries will remain available online.

2. The book wouldn’t be simply a blog sandwich. I’ve rewritten, rearranged, and merged entries for smoother reading. The topics are more logically ordered, and the whole thing hangs together organically. The blogs formed a kaleidoscope; the book is a narrative.

3. The book would have lots of new material. It includes things I didn’t know when I wrote the blog, ideas that have come to me since, and as much background and context as I could supply. The original blogs amounted to about 35,000 words (enough for a Kindle single). The finished book runs over 57,000 words.

4. It wouldn’t be an academic book. It’s written in the same conversational tenor as the blog. I try not to make anybody’s head hurt. No footnotes, but….

5. The book would exploit online access. The text is unsullied by links, to promote continuity of reading. But a section of references in the back contains citations and hyperlinks to documents, interviews, sources, and sites of interest. This section tells you where I got my information and, if that information is online, takes you there.

6. The book would have to be for sale… Part of this experiment is to see whether I can make back what I’ve spent on the project. I reckon that my travel to theatres and events like the Art House Convergence in Utah, along with other expenses like paying our Web tsarina Meg to polish up my self-designed Word book, comes to about $1200. In addition, I’d like something for my extra time and effort.

7. …but not cost too much. Planet Hong Kong 2.0 runs $15, which I think is a fair price given the cost of designing a book with hundreds of color pictures. But Pandora is a lot simpler and has only a few stills. So I’m offering it for much less: $3.99. 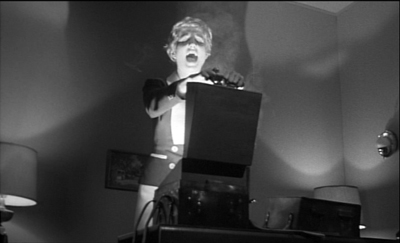 Pandora’s Digital Box: Films, Files, and the Future of Movies traces how the digital conversion came about, how it affects different sorts of theatres, how it shapes the tasks of film archives, and what it portends for film culture, especially the culture of moviegoing.

A key concern was trying to go beyond what I’d already written. For one thing, I try to answer questions I didn’t pursue in the blog entries. How did the major distributors orchestrate the transition? How did they reconcile the interests of the various stakeholders—filmmakers, theatre owners, manufacturers? By 2005, the specifications for digital cinema were established, but the real uptake came five to six years later. What led to the delay? How was digital cinema deployed outside the US? And so on.

Second, I provide background and context for areas I surveyed quickly online. For example, instead of sketching how a movie file gets projected, I take you into a booth and we follow the process step by step. The chapter on small-town cinemas reviews the role of single-screen theatres in the industry. The chapter on art-house cinemas goes back to the 1920s and shows remarkable continuity of taste and business tactics up to the present. Throughout, I consider how the US exhibition system has worked since the rise of multiplexes.

Third, there are unexpected tidbits. How did celebrity directors like Lucas, Cameron, and Jackson spearhead the shift to digital and later innovations? (I touched on that in a couple of recent entries here [7] and here [8], but there’s more in the book.) Who invented multiplexes? Cup holders? When did those annoying preshow displays start, and more important, who controls them? How do distributors decide whether to release a movie wide or to let it “platform”? Why do art-house theatres serve coffee? There are even a couple of jokes (maybe more unintentional ones).

I think it has worked out well. I’ve tested the text on Kindle, Nook, and the iPad, and it fits very snugly. You just have to import it as a pdf from your computer. On the iPad, it seems to work particularly well with the app GoodReader [9], which permits smooth searches, easy bookmarking, and quick shifts back and forth.

As I mentioned above, you can go here [2] to order the book. On the same page you can examine the Table of Contents and a bit of the Introduction.

It’s possible that some people might want to make a bulk purchase. Pandora might be used in a class, or given to staff members working at a film festival, or presented to members or patrons of an art house. For such worthy purposes, I can make the bulk price quite low. If you’re interested, please write to me at the email address above.

Self-publication is a risk for both author and reader. If you decide to buy the book, I thank you.

The next logical steps? A new ecological niche? A completely original book online, maybe. Or PowerPoint lectures with voice-over. Who knows? As Jack Ryan says at the end of The Hunt for Red October: Welcome to the new world.

Thanks as usual to our Web tsarina Meg Hamel, who did her usual superb job turning Pandora the Blog into Pandora the Book, and who has set up the payment process to be quick and easy. Earlier helpmates were Vera Crowell and Jonathan Frome, whose efforts in creating this site are remembered and appreciated.

The illustrations are from Kiss Me Deadly and Pandora and the Flying Dutchman, but you knew that. Thanks to Jim Emerson for his suggestions. 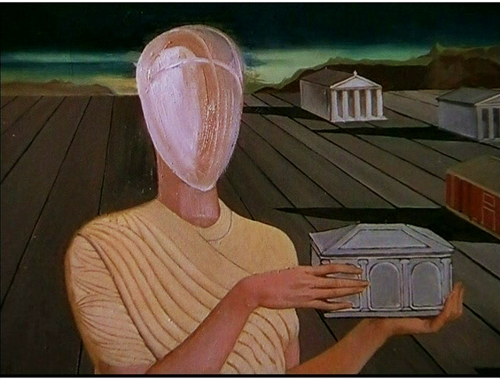