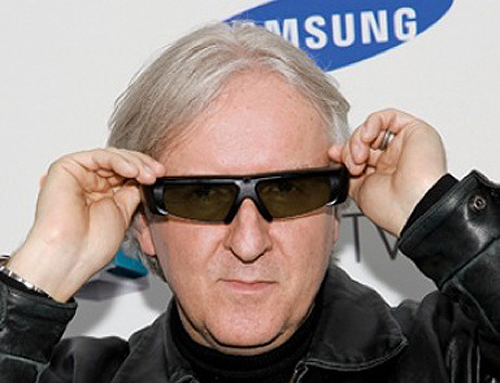 Every spring the National Organization of Theatre Owners holds a convention and trade show in Las Vegas. It’s now called CinemaCon, but in earlier times it was known as ShoWest. The gathering assembles thousands of exhibitors from around the world. Directors and stars show up to publicize summer and fall releases. There are screenings, award ceremonies, display booths, and panels about everything from sound systems to popcorn pricing.

The convention is always an extravaganza, but in 2005 things were particularly stirring. Then fewer than a hundred US screens were digital. To ShoWest 2005 came three of the most financially successful directors in history: George Lucas, James Cameron, and Robert Zemeckis. Robert Rodriguez joined them, and Peter Jackson participated in a prerecorded video clip. Their mission:  to sell digital cinema [2]. 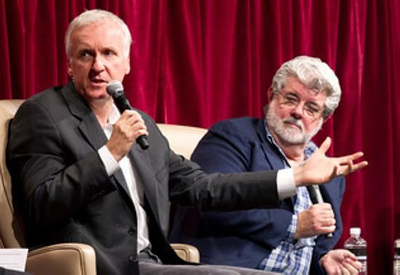 Cameron and company knew that the exhibitors needed a rationale for switching that would actually enhance their business. The killer app for digital screening, these directors and others had decided, was 3D.

Lucas claimed that he was hoping to re-release the first Star Wars in 3D in 2007. “We’re giving you two years,” he said pleasantly. Zemeckis announced two 3D films in preparation. In a 3D film clip, Jackson said, “I’m looking forward to one day seeing Hobbits in 3D.” Cameron, who had started working with 3D back in the 1990s, was fresh off the January release of Aliens of the Deep in IMAX 3D. He promised the exhibitors Battle Angel, telling Lucas, “You can have all my theatres when Battle Angel moves out.”

One argument was that 3D offered a way to build the business. 3D screenings would bring in new audiences who seldom went to ordinary movies. More important, the enhanced format would justify higher ticket prices. But of course 3D would necessitate moving to digital projection.

No Battle Angel and no Star Wars IV showed up in 3D, but the celebrity directors  kept their word to some extent. Zemeckis led the pack with Beowulf (2007), and Avatar (2009) cemented the deal.  With its record $2.7 billion worldwide box office, the latter convinced exhibitors that digital and 3D could be huge moneymakers. In 2009, about 16,000 theatres worldwide were digital; in 2010, after Avatar, the number jumped to 36,000. 3D was the killer app, or Trojan Horse, that pressured exhibitors into going digital.

But here’s the funny thing. At the 2005 confab, the directors summoned up an explanation that goes back to the days when TV threatened the movie trade: You need something special to yank viewers off their couches. In 1953, the bonus was widescreen color images and stereo sound. In 2005, the bonus was stereoscopic projection. All tentpole pictures, Cameron claimed, would be in 3D. “With digital 3D,” he said [4], “we now have a reason to get people out of their houses from in front of their flatscreen, high-definition TVs and back to the movies.” The premise was that 3D wouldn’t be feasible at home.

Now let’s jump ahead. It’s the 2011 conference of the National Association of Broadcasters. 3D TV is starting to arrive. Celebrity director James Cameron visits with his business partner Vince Case, who have formed the Cameron Pace Group [5]. According to [6]Variety [6] his message to the TV people is:

Your business is about to go 3D. . . . [He said that] the transition to 3D televison as going to happen much faster than usually predicted, even as soon as five years [when] “everything is in 3D and people demand 3D the way people used to demand color, and if you’re not broadcasting in 3D you’re not playing the game and you’re not getting any revenue.”

In 2005 Cameron told filmmakers and exhibitors to shoot in 3D to outrun television. Six years later, when nearly half of movie screens are digital, he advised broadcasters to adopt 3D as fast as possible.

It’s probably not irrelevant that the Cameron Pace Group supplies 3D cameras and assistance to both filmmakers and TV production companies. During the following year, the group announced, [7] it was a 3D equipment provider for CBS Sports and ESPN.

Lest Cameron’s message be missed, he and Pace reiterated it earlier this month. At NAB’s convention [8] he said that sports was only the beginning. Episodic television can also be shot quickly in 3D and easily converted to 2D. Television can’t confine itself [9]to one-off shows or a 3D channel: “We have to hit a critical mass of enough entertainment in 3D.” “The future of 3D,” he told an interviewer [10], “will be defined by TV.” 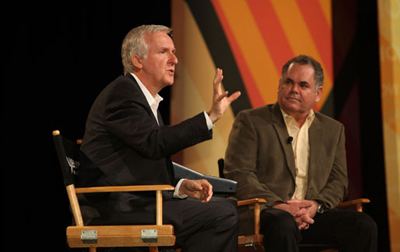 Where does this leave film? Having convinced exhibitors to go digital and to install 3D rigs in their booths, what does Cameron propose to offset the rise of 3D TV? He came to last year’s CinemaCon with a new “incentive”—now all stick and no carrot.

It’s well known that one problem with 3D cinema is a dimmer image. If a vibrant 2D film image is about 16 foot-lamberts, many 3D films are shown at less than four. This turned out to be a problem with screenings of Avatar, which in some venues ran at two foot-lamberts [12]. So Cameron is proposing that exhibitors fit their projectors with gear that permits higher frame rates. Shooting and showing at 48 frames per second (or even 60 fps) instead of the traditional 24 will yield a brighter, sharper picture. Interestingly, 3D TV doesn’t have the same problem with light output, so it’s possible, notes Steven Poster of the ASC [12], that a 3D HD image would have whiter whites and blacker blacks than a 3D film screening.

Moreover, Cameron prepared a demonstration that showed that in 3D, figure movement and camera movement strobe noticeably at the 24fps rate. They look much smoother at 48fps. This is probably true, but I haven’t noticed problems of strobing in 35mm films by Mizoguchi, Jancsó, Welles, Renoir, and other camera-movement masters. Since they didn’t use our modern 3D, they didn’t encounter the artifacts that Cameron and his peers now brood over.

Having pressured exhibitors to go digital and 3D, Cameron is now asking them to change their equipment to permit him to shoot in a new way he likes better—and to compensate for a deficiency in the 3D system he thrust on them. But he assures them that revamping their projectors is merely a matter of “little tweaks . . . tiny things that make it better.” [13] He has claimed it’s a matter of a software upgrade.

This holds good, evidently, only for the projectors made since January 2010 [14], the so-called “second” series. Projectors made earlier may need replacing. Moreover, one report suggests that the projectors using the Texas Instruments system, the dominant technology in the field, will require not only new software but a new media block. Christie, a major projector manufacturer, says that it will have these available [15] in June for $10,000 apiece.

You have to give Cameron credit for chutzpah. Once more he trots out the argument [16] that theatres have to leapfrog home viewing:

With theatre owners already worried that audiences are abandoning the cinema for the comforts of their home entertainment centers, Cameron argued that exhibitors cannot afford to make the case that “What you’re going to see is special and better than what you have in your home, except the motion sucks.”

The message seems clear. Digital and 3D gave you a competitive advantage for a couple of years, but now it’s time to retool. Those of you who didn’t get 3D along with digital, better start moving, especially if you want Avatar 2 and 3. (Just what Lucas said in 2005 about Star Wars IV 3D, which still awaits us.) And upgrade to 48fps, or even 60. Cameron’s message got support in this year’s NATO convention, when Peter Jackson announced [17] that he’d be trying to induce some theatres to play The Hobbit  at 48 fps, the rate at which he’s shooting that 3D production.

Who died and made you King of the World? 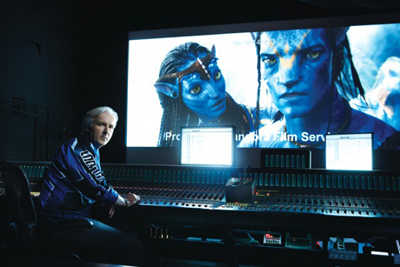 First, there was a time when exhibitors called these directors’ bluff. When Lucas griped that there weren’t enough digital screens for Star Wars: Episode III—Revenge of the Sith (2005), John Fithian, president of the National Organization of Theater Owners, replied memorably [19]: “I don’t put projectors in just for Star Wars.”

Now, it seems, the exhibitors are so scared of missing the next blockbuster that the filmmakers can dictate terms. It’s remarkable that these men can do something neither Griffith nor DeMille nor Disney nor any other powerful Hollywood filmmaker of the classic years dared do. They keep asking that the fundamental technology of cinema be changed so we can all watch a couple of their movies for a month or two every few years.

Second, if these guys are so passionately committed to quality, why don’t they make better movies?

According to Cameron, he and Vincent Pace, an expert in underwater cinematography, have been working together since 1988. They began building an HD and 3D system in 1999 and finished their first one in 2000. See the GigaOM interview here [20]. In the same interview Cameron mulls over the prospect of 4K television transmission.

A video showing Cameron’s ideas about digital cinema is available at Filmofilia [7].

As many have pointed out, higher frame rates were argued long ago for film screenings, notably by Doug Trumbull [21] and Dean Goodhill [22]. (See also Roger Ebert on Goodhill’s Maxivision [23].) Needless to say, Eastman Kodak enthusiastically supported this initiative, since it would step up film consumption.

This entry is a pendant to the series, Pandora’s Digital Box [24], which ran on this site earlier this year. That series, reorganized and expanded with new material and arguments, will be available in e-book form later this spring. 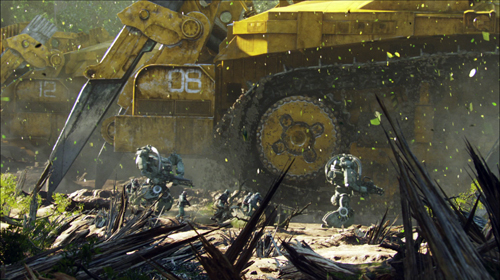