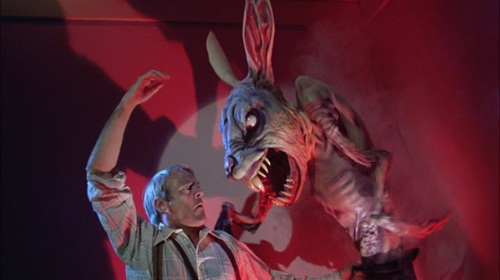 When will we baby boomers relax our chokehold on popular culture? Never, if the enthusiastic response to Joe Dante’s visit to Madison last weekend is any indication. A showing of Gremlins (1984) packed the house. A screening of his Twilight Zone: The Movie episode brought fans forward with DVD slipcases to sign. College kids reminisced about watching The ‘burbs with their dads and Explorers with their buddies (all on video, of course).

Although steeped in classical Hollywood, intimately acquainted with the most obscure output of the studios, Dante hasn’t abandoned the present. He shoots TV shows, webisodes, and the 3D feature The Hole (still awaiting a US release). He hosts a website, Trailers from Hell [2], in which directors comment on other directors’ works using a trailer as a point of departure.

His films, from Piranha (1978) and The Howling (1981) to the present, by way of Amazon Women on the Moon (1987) and Matinee (1993), combine the gonzo spirit of the 1960s with a good-natured reverence for the past. Particularly movies. Particularly crazed, tasteless movies. Like Spielberg and Peter Jackson, he’s a fanboy. “Most filmmakers are kids at heart,” he says. “And all actors are.”

Unlike Spielberg and Jackson, though, Dante keeps politics close to the surface. His films sustain the baby-boomer hope that you can squeeze cultural critique into a genre project. Everybody knows that the Gremlins movies are subversive trips into the shadows of bourgeois normalcy. Has a shiny kitchen blender [3] ever been used more efficiently?

The Gremlins pictures and The ‘burbs are valentines compared to Homecoming, Dante’s installment in the series Masters of Horror. This asks a simple question: Suppose that all the soldiers killed in combat were able to come back and vote? Is that a powerful lobbying group or what? When resurrected vets of Iraq start stalking to the polls, an Ann Coulter lookalike tries to stop them. Run on cable in 2005, this left-wing zombie movie slashes to ribbons pious platitudes about war’s costs. It’s required viewing for all 2012 presidential candidates. 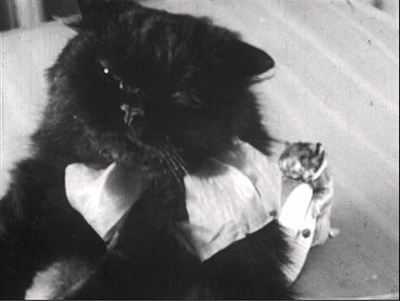 Dante began his career as a collagist. That’s not too fancy a name for a man who, with his friend Jon Davison, collected the ephemera of the great age of 16mm. TV shows, ads, and movie trailers swept out of local stations went into their archives. In time these and other glories of late-night TV found a new life, like a monster stitched together out of morgue remains. The strategy was simple. Dante and Davison rented five or six 16mm sub-B features and projected stretches of them, in rough order but jumbled together. The movies were interspersed with reels of clips.

Affection for the detritus of the media takes many forms. After watching too many campus simpletons (both students and profs) laugh mockingly at Fritz Lang and John Woo movies, I’m opposed to condescension. I suspect Camp in its disdainful form. I don’t like people demonstrating their sense of superiority to the trash their parents and grandparents enjoyed. Knowingness leaves you with nothing. 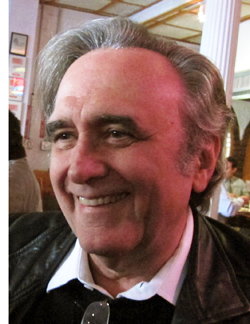 Moreover, in sequence after sequence, there’s a quality of astonishment that doesn’t make us feel superior. Take one exemplary moment of dépaysment. If you and I tried to be naive or trashy, we couldn’t come up with this.

You don’t laugh, you gape. It’s like one of our local attractions, The House on the Rock [7]: What’s disturbing is not that it’s done poorly, but that somebody thought of doing it at all.

The form of The Orgy—and it does have a form, of sorts—is to open with openings and end with endings. Several of the movies get started in the first half hour (Dante and Davison love opening credits) and we’re given enough of the plots to become curious. Most prominent are Attack of the 50-Foot Woman and Speed Crazy, the latter receiving a loving dissection highlighting, and repeating to the point of obsession the heel protagonist’s tagline, “Don’t crowd me, Joe.” Eventually the guy and his flashy sports car wind up crowded, all right–crowded into a ravine.

We cartoon characters can have a wonderful life 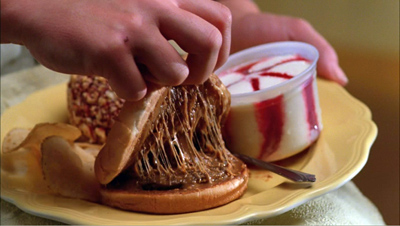 Dante the collagist leaves his fingerprints all over another film he screened here. When Spielberg launched his Amblin company, he hunted for directors who could make family entertainment in a genre format. Dante, who had already started Gremlins, was invited onto the omnibus Twilight Zone project. After the fatal accident on the Landis set [9], the studio backed off and it become “a movie they wanted to make but didn’t want anything to do with.” This gave Dante wide latitude and made him think, mistakenly, that studio suits always leave directors alone.

For this episode, Dante wanted to do an original story but Warners insisted that it had to be based on an episode of the TV series. He went back to the original Jerome Bixby story, which Dante and Richard Matheson reworked to add cartoons as a running gloss to the comic horror. The pseudo-family of demonic little Anthony inhabits a house that is half cartoonland, half-PoMo-Caligari. Saturated colors, occasionally striped with noir shadows, provide another Dante caricature of family domesticity, but now cartoons comment on the action. When Helen steels herself to eat, the dog on the screen behind her is doing the same. 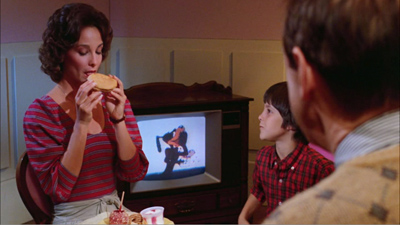 The crisscrossed shadows of the corridors are replayed in the sawtooth walls pursuing Bimbo. 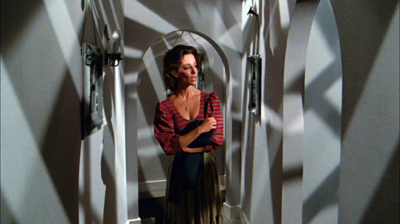 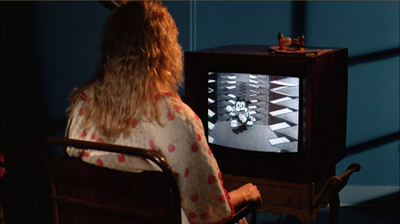 The TV is incessantly on. The cartoons running in the background supply whizzes, boinks, and thuds that jarringly punctuate the conversation between puzzled teacher Helen Foley and the family that Anthony holds in his magical grip. “This is Helen,” says Anthony, introducing her to Uncle Walt and his sister, as we hear a smash from the TV set. The cartoon tracks comment on the action too. As the family settle down in front of the tube, the elders dote on Helen and we hear a Stalling rendition of “Ain’t She Sweet?” Dinner is served to the tune of “The Teddy Bears’ Picnic.” And when Helen discovers her burger has been slathered with peanut butter, the visceral image is underscored by warbling winds that rise when she lifts the bun. Eisenstein, for reasons given here [13], would have loved the moment. The whole sequence plays out as live-action animation, with naturalistic dialogue and effects given a creepy overlay by the cartoon track. Is Helen Foley’s last name part of the gag?

Dante, impresario of the comic grotesque, finds his inspiration in popular culture, the more wacko and inept the better. The comedy may come from childhood silliness, the grotesque from childhood fears. They say we baby boomers will always be just big kids, and Dante accepts this with a grin and a darkly cheerful eye.

Many thanks to the resourceful Jim Healy for arranging his friend Joe Dante’s trip to Madison. Thanks as well to the Cinematheque [14], the Marquee [15], and the Chazen Museum of Art [16] for hosting the screenings. 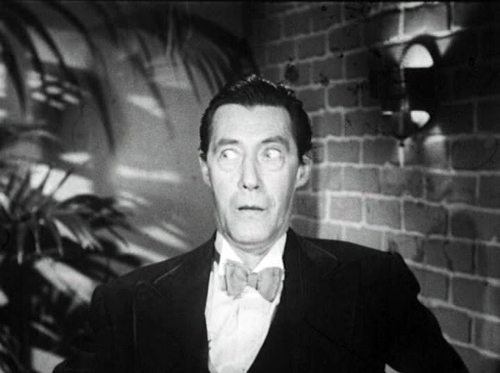