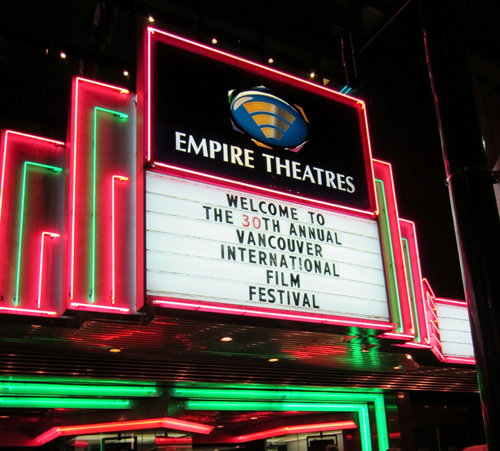 The big three-oh for VIFF.

After several entries (they start here [2]), time for a wrapup.

It was a record-breaking year for the Vancouver International Film Festival: over 150,000 admissions, 386 films, and many awards. Go here [3] for the stats. But linger here for glimpses of friends old and new.

Every night there’s a little, sometimes not so little, reception for filmmakers, guests, the press, et al. in the Hospitality Suite. Sort of like a college mixer, except with better food and everybody talking about movies. On the left we find critic/professor/festival scout Bérénice Reynaud and PoChu AuYeung, VIFF Program Manager and Senior Programmer. On the right,  Jack Vermee, Eurocinema expert and Programming Consultant. 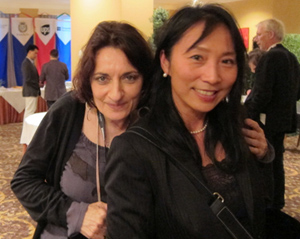 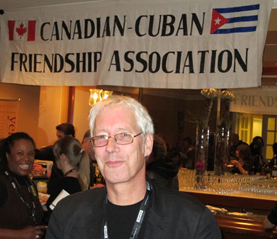 More VIFFers at work: Below left, Alan Franey, dynamic Festival Director, with Programming Associate Mark Peranson in the background. With his colleague Jessica Bradford, Justin Mah curates the all-important VIFF videothèque. Below right, Justin (also on the Programming Committee) gets in the holiday mood. 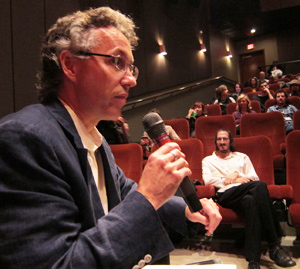 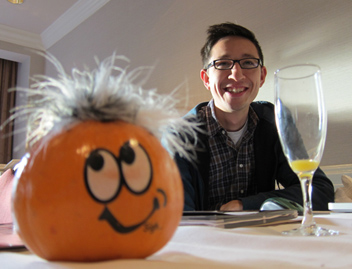 One of the wondrous things about the festival is the access you have to filmmakers. Here’s Kristin with Ann Hui, director of A Simple Life, and Ben Rivers, director of Two Years at Sea. 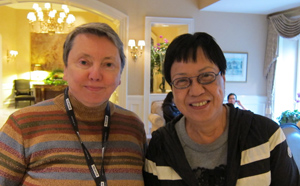 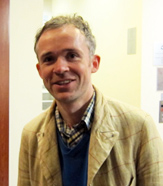 More fun with filmmakers: Raymond Phatanavirangoon, producer of Headshot, and Charliebebs Gohetia (The Natural Phenomenon of Madness); and Saul Landau (Will the Real Terrorist Please Stand Up?). 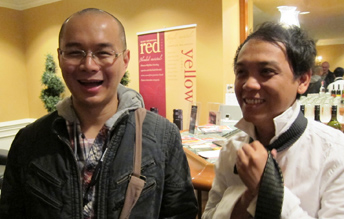 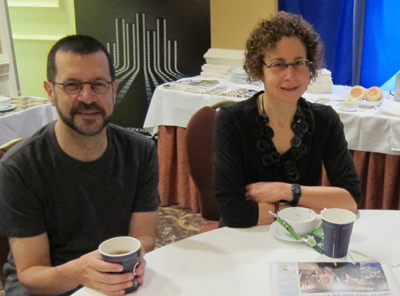 It’s not just for my camera; everybody here grins all the time. On left, Oz festival consultant Geoff Gardner poses with Bruce, while Bruce’s owner Eunhee Cha Brown, Hospitality Suite Manager and all-round organizer, looks on. On right, Tony Rayns [13], Dragons & Tigers Programmer, reflects on a figure in world film culture who, he reports, “insinuated himself ferretlike into the anus of every major world dictator.” 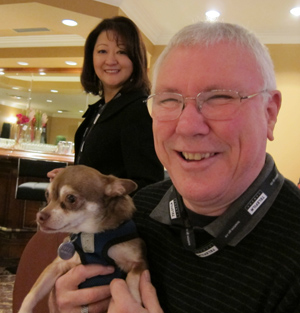 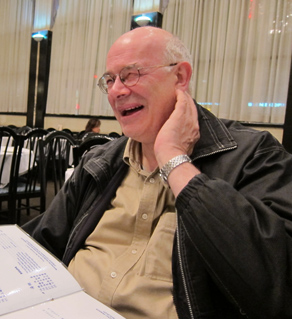 Other critics get jolly too, not to mention hungry. On the left, Sean Axmaker, proprietor of the excellent Parallax View website [16] (which houses VIFF reports from him and his colleagues Kathleen Murphy and Richard Jameson). On the right, Peter Rist, professor at Montreal’s Concordia University and critic for another fine site, Offscreen [17]. Although my pictures of long-time critical comrade Jim Emerson turned out lousy, you should imagine one embedded here and proceed to his magisterial Scanners [18] site for more VIFF coverage. 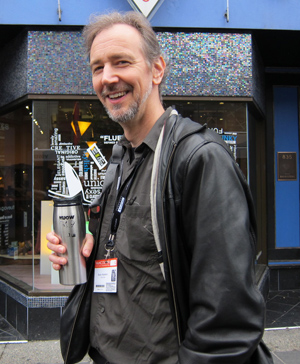 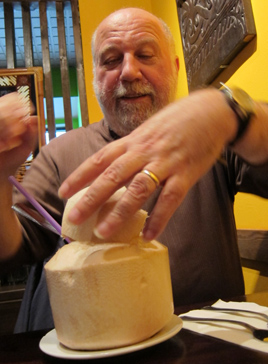 Loyal readers of our VIFF missives over the years know that JPG does not stand for Jpeg but rather Japadog [21]. (2009 and 2010 pix here [22] and here [23]). This enterprise is as important as any festival sidebar. Below, a nighttime glimpse of the Japadog wagon conveniently planted outside our hotel. On the right, Professor Jim Udden of Gettysburg College and author of a superlative book on Hou Hsiao-hsien [24], seated at Japadog Command and Control Center on Robson Street, contemplates the luscious deliciousness that awaits him. 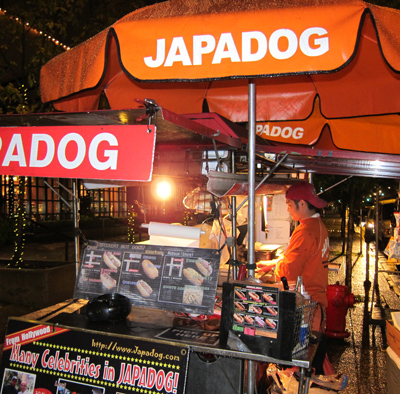 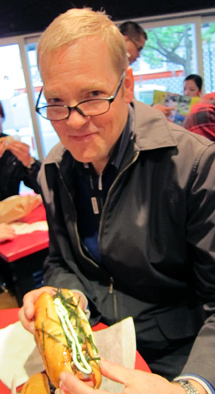 Director Ho Yuhang, critics Chuck Stephens and Robert Koehler, after a JPG feast:  From the cut of their strut you know they’re auditioning for Reservoir Japadogs. (Thanks, Chuck.) 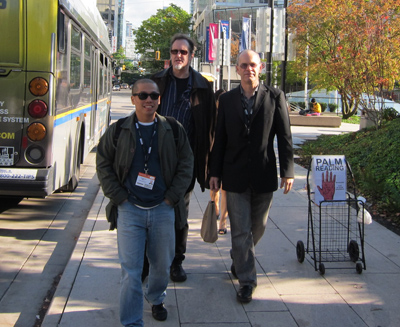 Too many more pictures (over 450), lots more to say, many new ideas; but not enough time. (See? Not even time for subjects and verbs.) Suffice it that once more we had a splendid time at this friendly, low-pressure but high-quality festival. You should come next year. 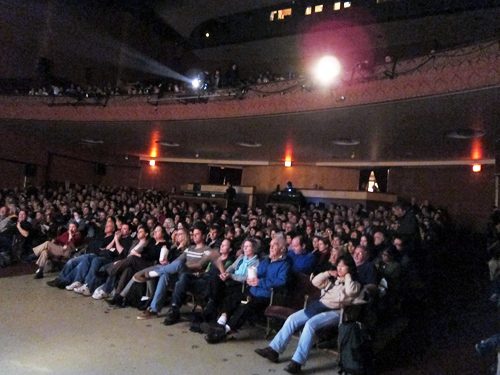 A packed house at The Vogue [29], a 1941 theatre that had become a music venue in recent years. It was brought into festival service after some years off-duty. Prettier interior shots are here [30]. To see another Granville Street mainstay in its heyday, go here [31].