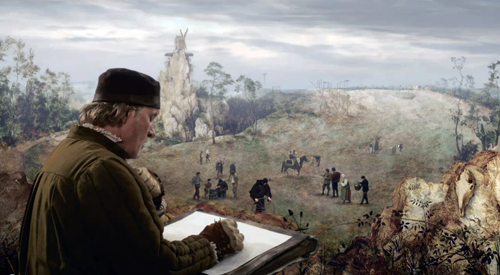 Hollywood may have largely let us down this year, but after the first few days at the Vancouver International Film Festival [2], we’ve seen several excellent films and a lot of originality. Here are two of the highlights so far.

Every year, when festival posts its list of films, I look through it for titles I’d heard about from other festivals or seen enthusiastically reviewed or had recommended to me. One title I was delighted to see on this year’s program was Lech Majewski’s The Mill & the Cross. It’s not nearly as famous as some of the other films showing here, like The Skin I Live In or Once Upon a Time in Anatolia, but I keenly anticipated seeing it.

I learned about The Mill & the Cross through an article in [3]American Cinematographer [3] (posted on the film’s rich website [4]). Majewski collaborated with art historian Michael Francis Gibson to explore Pieter Bruegel’s 1564 masterpiece, “The Way to Calvary.” In the painting, the figure of Christ carrying his cross to calvary is set in the midst of a vast landscape full of fields, cliffs, a distant town, trees, and hundreds of people, all surmounted by a windmill atop one of the rocky formations and silhouetted against a windy, cloudy sky. Majewski sought, as he said, “to enter Bruegel’s world”—to enter into the painting itself and bring it to life.

His goal reminded me of Godard’s 1982 film, Passion, where one of the main characters films actors in a studio. He appears to be trying to replicate classic paintings, with models posed in costumes and miniatures representing a cityscape. I’ve never been able to picture what the result might have looked like. I’m not sure I would have enjoyed watching it, which may be part of Godard’s point. But Majewski had the tremendous advantage of modern computer technology to create an almost seamless blend between digital elements derived from the original painting and those derived from live-action filmmaking on location and in front of blue screens. For those who complain about “effects-heavy” blockbusters, The Mill & and Cross is a powerful counter-example, a film utterly dependent on CGI yet meditative and even profound. It certainly succeeds in Majewski’s goal, creating an uncanny sense of being inside the painting (see above.)

For the film seeks to explore the qualities that Bruegel himself did, to push the crucifixion to a minor place in the composition of the whole and to explore the sacred in the everyday. The film’s story is dense. On one level, we watch Bruegel sketching his models as he explains the concept of the painting to his patron. But we also see him departing home in the morning, and we follow the everyday doings of his family. We see several other minor characters who will figure in the painting waking up and beginning to work, including the miller in his mill atop the cliff. The filmmaking team found a surviving mill of the period, and for an astonishing scene early on, the ancient works in the vast interior were set in motion for the first time in centuries.

We see details of the characters’ lives, such as a man hitching up a horse to a wagon, an innocent-appearing detail until we realize much later in the film that this cart will deliver the wood for making the crosses and will carry the two thieves condemned to die alongside Jesus to Golgotha. Finally, we are invited to contemplate the contradiction, so familiar from thousands of paintings, that an event from antiquity is seen taking place in a contemporary landscape. The result is a comment on the Spanish occupation of Flanders as well as on the Biblical story. 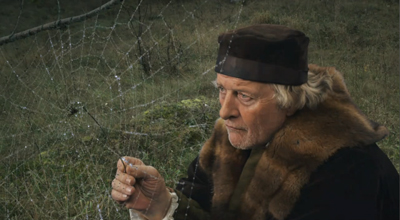 In an all-too-brief scene, Bruegel explains the composition of the painting to his patron, showing how the small group around Jesus forms the center, with the lines between the other main elements around the periphery intersect with it. The implicit comparison is to a charming moment in the film when the painter admires an intricate spiderweb. Apart from all the thematic material, we do learn something about Bruegel’s painting–a point that is emphasized at the end of the film, which tracks back from the actual painting in the Kunsthistorisches Museum in Vienna, as if inviting us to go and contemplate it in the light of what we have just seen.

Part of what makes The Mill & the Cross so exciting is that it achieves that rarest of things, making us feel that we are seeing something very worthwhile that has never been done before.

The film has a very limited release in the U.S. Anyone who has a chance to see it on the big screen should snatch it. The images, shot on the Red One camera and projected (here, at least) on 35mm, are spectacular.

Once upon a time, and time again

Cesare Zavattini, central screenwriter of Italian Neorealism, liked to tell this story. A Hollywood producer once told him:

He was right. But we have still not gone far enough. It is not enough to make the aeroplane pass by three times; we must make it pass by twenty times.

And, Zavattini seems to suggest, the machine gun should never fire.

Neorealism was one of the most important influences on what we’ve come to call the postwar European “art cinema,” and particularly on filmmakers’ treatment of time. I thought of the Zavattini passage while watching the opening scenes of Nuri Bilge Ceylan’s Once Upon a Time in Anatolia, a film which proves that you can always ring fresh changes on a well-established tradition.

Actually, “opening scenes” isn’t quite right. The very first thing we see, a sort of prologue, presents in two shots the lead-up to a crime. Then come a couple of minutes of credits. Then we get nearly  fifty minutes of nighttime shots of police cars driving through the countryside, headlights appearing tiny in the landscape. Again and again the cars halt as the police ask their murder suspect if this is the place where he and his brother buried the body of the man they killed. The suspect says he was drunk and can’t remember exactly. The investigators pick over the area looking for clues before driving on.

But the sequences aren’t quite as spare as I’ve indicated. Scenes inside the car and poking around the areas that might harbor the body pick out two main characters: a brooding doctor and a careful prosecutor overseeing the operation. The secondary cops and assistants are sketched in too. So we have a sort of balancing act between daringly distant “empty” shots and more standard expository scenes. The  conversations in the car and in the landscape balance moments that dwell on atmospheric detail. So the relaxed pacing spares time for what will surely be one of the film’s most famous shots, a view of an apple shaken from a tree and bouncing downhill into a stream, where it continues to roll and bob in the dark. It presages the importance of melons, and in the final shots, a yellow soccer ball.

We frequently find that an art film flaunts some arresting narrational devices at the start before taming it as things move along. (Think of 8 ½’s bold opening, initiating us into Guido’s fantasy world, in effect teaching us how to watch the film.) Similarly, Once Upon a Time in Anatolia gets more linear and psychological as it goes along. It shifts from the more unfamiliar uncertainties of the futile stops and explorations to the better-defined questions we expect in a mystery. Is the suspect really guilty, or did his brother commit the murder? What triggered the killing? What effect has the crime had on the dead man’s wife and son?

The gradual shift seems to me to match a certain rigor in Ceylan’s stylistic handling. (Warning: Stylistic spoilers ahead.)  In the nighttime search, long shots and extreme long shots dominate—if not by their number, at least by their prominence and vividness.

But having given us plenty of lengthy establishing shots in the first long section, Ceylan denies them in the next two portions.Later in the evening, the search party takes refuge in the house of a village leader and shares a meal with him. Here the action is broken up into close shots, with no long shots (I think) establishing where the characters are sitting. Everything, including the arrival of their host’s beautiful daughter, is given in tight shots of each character.

When the searchers return to town the next morning, they’re greeted by an angry mob. Again, the action isn’t shown fully. Now very long telephoto shots let us glimpse the police and the wife and son of the murdered man, with the crowd visible only as surging, out-of-focus heads and shoulders blocking the foreground.

The last forty minutes or so are centered on the doctor. Attached to him, we watch some interactions that trace out his responses to what he’s witnessed. These are handled in a traditional way, with shot/ reverse-shots, some of them head-on optical point of view, and lingering shots of the doctor brooding.

To the end, Ceylan doesn’t become completely predictable. There’s a nifty bit of elliptical editing during a conversation with the prosecutor. The offscreen sounds of an autopsy, layered by the sound of children’s play, recall passages of shrewdly timed offscreen dialogue that we heard during the long night’s search. And the final few shots play with optical point-of-view in a misleading fashion that has become something of a tradition in the art cinema.

So if the plotting gradually settles down into something less disconcerting, so does the visual style. But that shouldn’t take away from the delicacy and deliberation of a film that gains real gravity through hints and elisions. Above all, certain faces, particularly the despairing one of the prisoner who has a painful secret (surmounting this section), exercise a powerful hold on us. The conclusion of Once Upon a Time in Anatolia pulses with genuine emotion, coolly contained in a mode of cinematic expression that after sixty years or so continues to harbor great power.

The Zavattini passage on flying planes is available here [15].

PS 9 October: Thanks to Miklós Kiss for correcting an embarrassing spelling error.

Once Upon a Time in Anatolia.

PS October 8: Jim Emerson [17] has also written on The Mill & the Cross, linking to an interview with Majewski [18]on BOMblog.