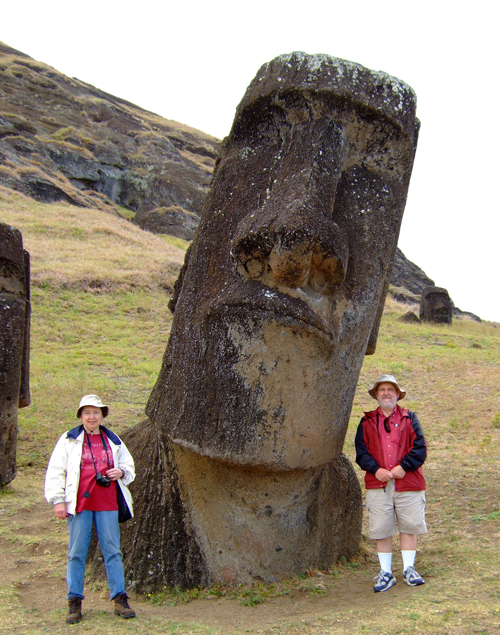 Us on Easter Island, 2006, soon after starting Observations on Film Art.

This blog began on 26 September 2006. Today’s entry is number 450. I reckon that we’ve dumped at least 600,000 words into the maw of the Net. Add in many web essays and two full-length books (one a reprint, the other a revision), and you get an object lesson in something, probably obsession. Scribble, scribble, scribble…. [2]

The figures that make us proud, however, have to do with you. Since it launched, the site has attracted over 3.5 million visits from nearly 2.5 million readers (or computers; or IP addresses; or cookies; or some such virtual entities). Nearly half a million of those readers/ avatars have visited more than once. These numbers are, we suspect, fairly modest ones compared with other film websites. But for writers whose books have print runs of 2500, they’re cause for surprise and gratitude.

Looking back, we see we’ve learned a lot. Our first entries lacked pictures because I didn’t know how to enter them. Some of the earliest entries with pictures aren’t very well laid-out; chalk that up to my apprentice fumblings with Photoshop. Gradually, we got better at integrating texts and images, and this year we’ve started to add video clips, sparingly. In the beginning we wrote several times a week, but now we aim at only four to six a month. As readers haven’t been shy to point out, our entries have gotten rather long. It’s just to make up for less frequent posting, I tell myself and anyone who’ll listen.

There are continuities as well. The very first entry [3] talks about how flashbacks make a difference in cinematic storytelling–a topic that continues to preoccupy me. Soon enough I was off to the Vancouver International Film Festival [4], an event that Kristin and I will be attending again this week. Our first month on the job led to entries on mobile cinema, an academic conference, an important film and director (Sátántangó by Tarr, earning two entries), a recent US hit (The Departed), and current trends in the American film industry. All of these matters have woven through our last five years.

An enterprise undertaken by two mild-mannered academics (okay, at least Kristin is mild-mannered) has brought us closer to old friends and introduced us to new ones. We’re thankful that so many people have kindly linked our entries and brought us readers. We’re even more grateful for getting to know Jim Emerson [5], Matt Zoller Seitz [6], Catherine Grant [7], Kevin Lee [8], Grady Hendrix [9], David Poland [10], Susan Doll [11], Daniel Kasman [12], and many of the other writers who have shown, in a wide variety of styles, what serious film thought can be in this new medium. We also thank Manohla Dargis [13], who introduced our blog [14] to the New York Times readership, and Tim Smith [15], guest author of an entry that still draws intense interest. Roger Ebert [16], pioneer of Web criticism, has been a stalwart supporter, generously steering his loyal readers to our site.

The Web’s churn sometimes grinds up ideas and pulverizes thought. These people and their peers preserve the ideal of lively, acute conversation about movies. They also exemplify an openness to ideas that many academics would do well to imitate.

We’re happy as well that the blog has enabled us to call attention to DVD publishers like the Criterion Collection [17], Masters of Cinema [18], Flicker Alley [19], and Kino Lorber [20]. These firms play irreplaceable roles in film culture, trusting that some viewers want to have their horizons expanded. We admire the pluck of the people behind these enterprises and we’ll continue to help get the word out about their collections.

Speaking of film culture, we’re lucky to live in a milieu rich in movie lore and movie love. Our department and our immediate colleagues keep us alert and teach us all manner of things. Our archive [21], run by the indefatigible Maxine Fleckner-Ducey, puts thousands of films and hundreds of thousands of documents within easy reach. Our tech support is unparalleled, thanks to Erik Gunneson and Mike King and Peter Sengstock, who has recently taken our website under his wing. This morning, with no hesitation Pete righteously smote Bangladeshi hackers who had infected our site.

We can stay reasonably plugged in to the international film scene thanks to our venues on campus, such as the Cinematheque [22] run by the dazzling Jim Healy and the new Union South cinema, the Marquee [23], programmed by students and Tom Yoshikami. We benefit as well from good sites off campus, such as our Sundance miniplex [24] and our Museum of Contemporary Art [25]. Guests come through too; just last week we had lunch with the estimable and hilarious Second City alum Betty Thomas. Our blog tsarina Meg Hamel has as her day job directing the Wisconsin Film Festival [26]. Meg, now the mother of a seven-week-old charmer named Hazel, has been with us from the start. Every entry we compose is in debt to her.

For some people the Web is an endless dorm-room conversation. For others it’s a speed-dating session. For us, children of the postwar print age, it’s a great big magazine rack. A blog lets us be our own editors and publishers, freeing us of length limits and giving us as many stills as we want. (And in color.) We don’t include comments because we don’t the time to monitor them. Maybe we’re just stuck in Web 1.5. But we do answer nearly everybody who writes to us, and we sometimes tack those responses onto our entries. Call it our version of letters to the editor. And these correspondents almost always make corrections and suggest nuances that are worth considering.

We have no intention of stopping. Illness, travel, and other writing projects have slowed us in the last few months, and a looming deadline will limit our output a little up to December. But there are two entries on the shelf, one coming soon, the other, a windy one, later this week. After those we’ll be reporting as usual from Vancouver. Unlike Bob and Doug McKenzie [27], we’re not at a loss for topics. For at least five more years, we’ll try to interest you in what we’re thinking.

Kristin and I have compiled a handful of early entries that never became readers’ favorites and didn’t make their way into the  Minding Movies collection but that we harbor warm feelings toward.

One entry that was originally supposed to go into Minding Movies but which had to be cut for reasons of length is “Cavalcanti + Ealing = a little-known gem [28].” It discusses Cavalcanti’s 1942 classic Went the Day Well? When we posted this entry in May of 2008, it was hard to obtain a DVD of this moving tale depicting an imaginary Nazi invasion of a bucolic English village. Now you can order a manufactured-on-demand DVD-R version [29] from Amazon, but if you have a multi-standard player, you’re probably better off getting the brand new Optimum restoration from Amazon.uk, on DVD [30] and Blu-ray [31] (KT).

In this very early entry [32], some readers didn’t like my criticizing George Stevens’ direction in Giant, and I admit it wasn’t very deft. And the stills are too small. But I think my analysis of the shootout in PTU stands up. This sequence should be studied by young filmmakers, as well as by those critics still talking about the decline of craft in Hollywood action cinema. More generally, I’ve written a lot on Hong Kong film that I couldn’t fit into Planet Hong Kong 2.0. (Copies still available [33]; a great holiday gift.) I’m unreasonably vain about writing seven longish entries in the week of its release; the one-man blogathon starts here [34] (DB)

“Happy birthday, classical cinema!” [35]was posted in December of 2007, to mark the 90th anniversary of the year when, as most historians agree, the classical Hollywood model of creating movies gelled. We don’t follow the bloggy tradition of posting ten-best lists each year, but we thought instead we might as well post the ten best of 1917. Of course, many silent films do not survive, but we thought such a list might be a handy guide for those seeking to explore the early era of filmmaking. The 90-year-old ten-best lists became an annual tradition on “Observations.” Watch for the 1921 entry in December (KT).

Some entries use so many stills that book publication would be onerous. One of my favorites is my appreciation of Shimizu Hiroshi [36]. Our discussions of Japanese cinema don’t attract as many readers as they should. After all, we are talking about one of the three greatest national cinemas.(I leave it to you to imagine the other two.) Modest Shimizu can break your heart. Since I wrote this, the admirable Criterion has brought out a fine sampler [37] (DB).

With Steven Spielberg’s The Adventures of Tintin coming out in a few months, it might be interesting to look at “Reflections in a crystal eye,” [38] a joint entry on Indiana Jones and the Kingdom of the Crystal Skull (or IJatKotCS, as we like to think of it). We weren’t terribly keen on the film, but there are other Spielberg movies we like a lot better. We point to some characteristic tropes (KT).

In these days of worry about piracy, it’s nice to recall an era BD (Before Digital) [39], when piracy was simpler, and even more nourishing to film culture (DB). 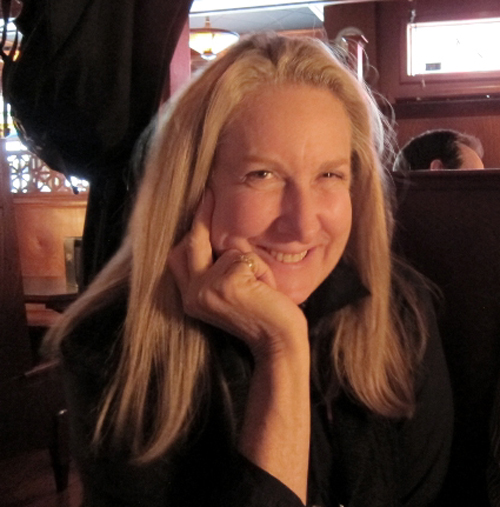