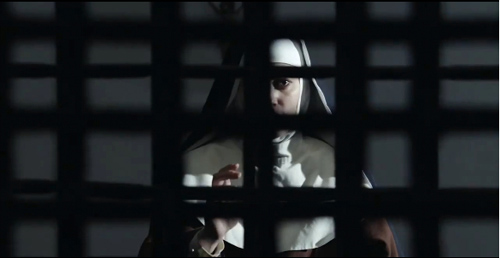 Once Fassbinder said something to this effect: “One is always misunderstood. If you spend time clearing up misunderstandings, you’re dead.” Usually I think this is good advice. Now, though, a filmmaker whom I admire has, in publicity for a film that I admire, misunderstood me. So I’m squawking, mildly.

I met Raúl Ruiz only once, many years ago during his visit to our university here in Madison. We’d programmed At the Top of the Whale and Life Is a Dream. One afternoon we were sitting in the Student Union looking out over majestic Lake Mendota, and he started to muse. “I see a boat on the lake. Three men are in the boat. One is planning to kill the other two, but we don’t know which one it is.”

This was only one of many forking paths our conversation took. Over dinner that night Ruiz was at pains to explain that there was nothing new in Postmodernism that we couldn’t already find in the Spanish Baroque. That was pretty persuasive. He talked as well about his two production courses at Harvard. “In one, we shoot a drama as if it were a TV quiz show. In the other, we shoot a quiz show as if it were a drama.” In sum, typical Ruiz ebullience and passion for rethinking forms.

Earlier this year my name got linked to his in an unexpected way. In an interview [2], Ruiz mentioned that a Swiss magazine had claimed that Mysteries of Lisbon didn’t conform to “Bordwell’s Paradigm,” and he agreed. Alerted to this interview by Adrian Martin, I shook my head and thought, I don’t know what Bordwell’s Paradigm is, so how can anybody else? I suspect the label has to do with my characterization of classical Hollywood cinema, but who knows?

Since then Ruiz has signed a discussion of Mysteries of Lisbon that expands on the same theme. You can read it here [3]. It starts off with a bang:

The American professor David Bordwell considered that all narrative strategies that can be applied to modern films are based on a certain notion of verisimilitude (or narrative evidence).

Thanks to them, the most unbridled fictions are acceptable and accepted. And this very verisimilitude, it is said, is averse to any straying from a guiding line (what is commonly called the action’s guiding arrow), with its variations in intensity and its turbulent twists and turns.

This theory, which depends on a certain number of rules often abusively attributed to Aristotle, finally became what purists hastened to naively call “Bordwell’s paradigm”–the whole of narrative strategies that stem from impulse, from the presumption of verisimilitude.

What is called “modern drama” or “bourgeois drama,” or even “the Ibsen Shaw postulate” has given rise to this superstition. In modern drama, structure and construction dominate, even beyond the poetic incoherence or the irrelevant facts it supposes. The author is an architect who builds shelters for fictions, various events which, and only because they are protected from the rain of the improbable, become credible and relevant.

Each of these fictions, of these mobile structures, is guided by a narrative arrow. But beware, only one per fiction: William Tell is a well-told story because only one arrow cuts in two only one apple, but the battle of Azincourt is not because Robin Hood and his people’s swarm of arrows does not enable one to read the time on the narrative clock, veiled as it is by clouds of arrows, each guided by its independent little intrigue. “Clouds and not clocks” would say Karl Popper.

In modern drama, the proliferation of truncated facts is not acceptable because it makes us stray from the notion of causality which is inherent to that of verisimilitude, and without which there would be no story.

Promoting a film by citing an American professor may not be the height of shrewd marketing, but put that aside. Peering through the haze of this rather awkward translation, I’m inclined to say that Ruiz mistakes my claims. I’ve said in several places that narrative, prototypically, requires causality. But that isn’t the same thing as claiming that such causality is realistic in nature, or that causality is the main attraction of narrative. Mainstream cinema, including Hollywood, often uses certain kinds of verisimilitude as an alibi for formal experimentation. And I’ve celebrated filmmakers like Eisenstein and Ozu who break away from narrative causality.

It’s ironic that on the same day I post a blog entry arguing that realism gets short shrift in studio cinema of the 1940s [4], I find Ruiz claiming that realism is my guiding light. If  I disapproved of the “disparate, truncated, labyrinthine and baroque” aspects of narrative, I wouldn’t have said this about Mysteries of Lisbon:

This being a Ruiz film, there is as well a tangible pleasure in the artifice of storytelling. The film acknowledges that all the handy coincidences, buried pasts, multiple identities, and revelations of kinship are there for our delectation. . . .

This recounted history is only the first of a cascade of flashbacks, issuing from several characters, and these gradually show deep connections among persons tied to Pedro’s past. Secondary characters in one story become protagonists of another. The young hero is gradually displaced as the center of the action by war, secret romances, rivalries, duels, and infidelities. Like Pasolini in his Trilogy of Life, Ruiz is happiest when opening up a plot detour that will eventually become a new main road.

I think that Ruiz and I might disagree about how much Mysteries owes to psychological causation, and about whether labyrinthine trails can converge, let alone become highways. Both of us use metaphors of linearity, so maybe our disagreements are basically about whether the detours and paths are truly dead ends. Maybe I think his plotting is tighter than he does. Still, I expect that we’d agree that much of the pleasure of the film is its delight in apparently capricious digression.

Anyhow, my squawk is mild because it’s a pleasure to be misunderstood by a grand filmmaker. What Fassbinder didn’t say was that artists’ misunderstandings can be productive, leading to the creation of new artworks, and perhaps ideas about them.

If my remarks on Mysteries of Lisbon don’t make you thirst to see it, Manohla Dargis’ review [6]surely will.