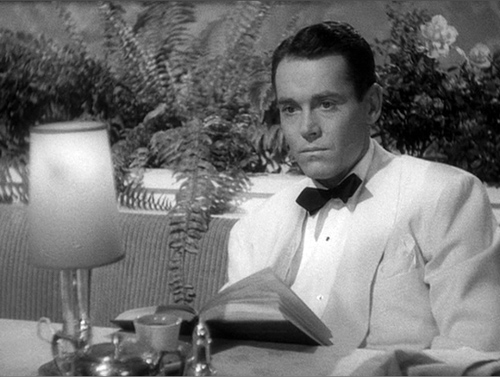 Hollywood is supposedly making movies for mass audiences, and up to a point that’s true. But there’s an in-group aspect of Hollywood as well. There are moments in the movies when the writers and directors and actors seem to be talking more among themselves than to outsiders. We’re probably more familiar with this nowadays, as when Tarantino and Soderbergh cast Michael Keaton as the same character in both Jackie Brown and Out of Sight. Not only does the gesture suggest solidarity between two directors of roughly the same generation. I think it’s also a sign that the directors respect Elmore Leonard’s concern to let a character from one novel pop up in another.

You see the same attitude in those in-jokes we occasionally find in Hollywood movies. The most famous, I suppose, is Cary Grant’s warning, in His Girl Friday, that the last man who thought he’d beaten him was Archie Leach, “just a week before he cut his throat.” Archie Leach was of course Grant’s real name. In the same film, Grant as Walter Burns tells the platinum blonde Angie to seduce Bruce Baldwin. How will she know him? He looks like that fella in the movies, he says, “You know, Ralph Bellamy.” Angie replies with simple lack of interest, “Oh, him?” Since Bruce is played by Bellamy, this is a little cruel; both character and actor are treated as losers.

Preston Sturges liked such playfulness, as when in The Lady Eve (1941) he used his birthday as the date on a check. In the same movie, the protagonist reads a book called Are Snakes Necessary? 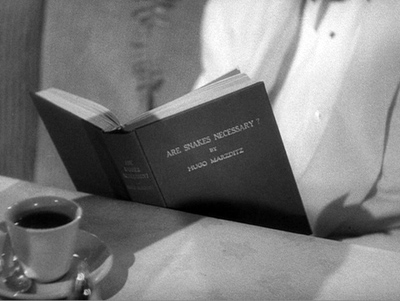 No such book exists, more’s the pity. The title pays comic reference to James Thurber’s 1929 best-selling satire on marriage manuals, Is Sex Necessary? and confirms the snake-as-phallus imagery that isn’t exactly underplayed in the rest of the film. Sturges revisited the gag phrase when he proposed Is Marriage Necessary? as the title for a later picture. Unsurprisingly, it didn’t pass the censor, and instead we got a more anodyne title, The Palm Beach Story (1942).

These are comedies, though. On Saturday night, I saw an instance of in-group crosstalk where I hadn’t expected it. The Long Night (1947) is Anatol Litvak’s somber remake of Le Jour se lève. Unlike Hawks and Sturges, Litvak wasn’t exactly known for cockeyed humor, nor was screenwriter John Wexley (The Roaring Twenties, City for Conquest, Hangmen Also Die!). Yet in one shot, there it was, a citation as plain as a pikestaff.

Over several years I’ve been gathering material for a blog or web essay on product placement. (I’m mostly in favor of it.) So I tend to scrounge around among hand props and other bits of flotsam in the frame, hoping to catch a brand name. Usually this task-driven visual search [3] comes to naught, but The Long Night paid me back.

In Sturges’ The Lady Eve, you’ll remember, Henry Fonda plays Charles Poncefort Pike, heir to the vast fortune of the Pike brewery. The firm’s success rests upon Pike’s Pale Ale. A flyer for the product convinces Jean and her father that Charles should be the target of their next con job. 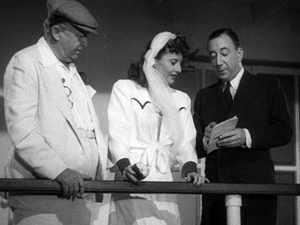 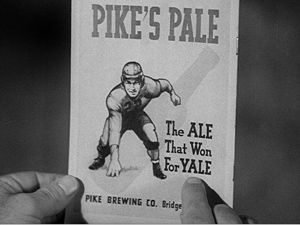 Pike’s Pale and its tagline run through the movie as a comic motif. But no such product then existed. It features on a list of fake movie products in a 2006 [6]New York Times [6] story [6].

All the more surprising, then, is a scene in The Long Night six years later. The rapacious magician Maximilian (Vincent Price) takes Joanne (Barbara Bel Geddes) to a symphony concert. She reads the program avidly, and on the back we can glimpse a familiar brand. 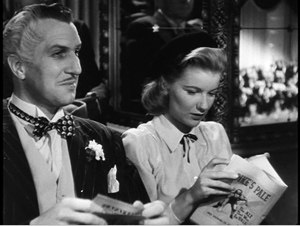 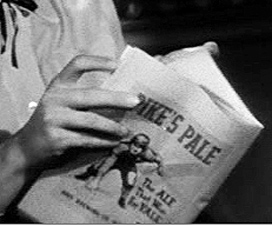 The advertisement even features the same text and layout as the flyer in Sturges’ film.

If it’s an in-joke à la His Girl Friday, what’s the punchline? And how did it even get there? We have two different studios (Paramount, RKO) and different genres (satiric romantic comedy, gloomy romantic drama). Was the ad just lying around a props warehouse? Did Fonda, who plays the hero of The Long Night, keep the flyer as a souvenir of The Lady Eve and ask the producers to include it as a shout-out to Sturges? Was there a company specializing in making printed props for the studios and here it just recycled something it had done for Paramount? Or is it just a case of Hollywood gratuitously referencing itself?

I’d be eager to hear from anybody who knows or has an educated guess. In the meantime, I’ll keep scanning frames, and being diverted by the ways that the Hollywood In-Crowd creates a world of off-center echoes and cross-references. It’s as if movies fertilized each other, but promiscuously, creating an eccentric world behind the screen, where stray images and lines of dialogue jostle against one another. Of one thing we can be sure: It will be unpredictable.

Today there is a real Pike’s Pale Ale. The proprietors of Seattle’s Pike Brewing company [9] didn’t know about The Lady Eve when they conjured up their brew. I’ve never tasted it, but you might count this a case of blog product placement. Mmmmm, pale ale….

Incidentally, The Long Night is another of those 1940s movies with a flashback within a flashback, of the sort I considered in an earlier post [11].

I top and tail the entry with pictures of Slim because he looks swell when he’s thinking. 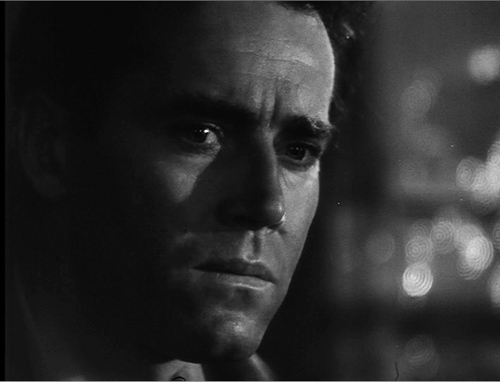 PS 19 June: Rapid Response Dept: Alert reader Sean Weitner points out the reappearance of the same newspaper page in a bevy of TV shows. The evidence is here [13]. Thanks to Sean!

PPS 21 June: More bulletins from alert readers. Leo Rubinkowski points out the source of the recurring newspage on [14]Slate [14] here [14]. This wouldn’t, I think, explain the reappearance of Pike’s Pale, but maybe…. Andrea Comiskey has found that Douglas Sirk was apparently fond of certain foil-etched items. The films are All That Heaven Allows and Written on the Wind, and the pix are here [15] and here [16] and here [17] and here [18]. Leo and Andrea are UW grad students, so I’m especially happy to thank them.