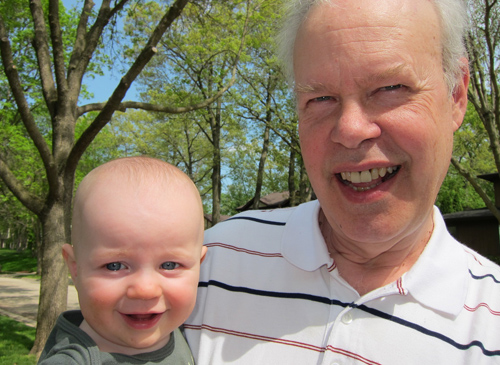 Can you look at this picture without smiling? I think it’s hard, for reasons that relate to one thread of the essay here [2]. Thanks to Levi Buchhuber, age eight months, and Jim Cortada, grandpa.

Next week several dozen bright, energetic researchers will be crowding into conference rooms at Elte University in Budapest [3] for the annual meeting of the Society for Cognitive Studies of the Moving Image [4]. Full details on the event are here [5]. As usual, I expect that a hell of a time will be had by all.

I’ve discussed the purposes and projects of the members of this dynamic bunch on earlier occasions. If you want a rundown, I’d suggest reading the items in chronological order:

*I sketch out the SCSMI project in this entry [6]. There are more ruminations in two run-ups to the 2008 Madison SCSMI get-together (here [7] and here [8]), and one a year later summing up that event [9].

*For an utterly fun introduction to some of the research on display at SCSMI, head to one of our most popular entries, the guest blog by Tim Smith called “Watching you watch THERE WILL BE BLOOD.” [13]

This year’s paper line-up [14] is especially enticing, and the prospect of seeing so many old friends is even more thrilling. Alas, for reasons beyond our control, Kristin and I aren’t able to attend. As the date draws near, my need to stay home saddens me more than I had expected it would. I must content myself with directing you, with all the fervor I can muster, to the event. Many of our members have told me that their first visit was life-changing, providing them a whole new social network that would encourage their research. Moreover, I notice that every year several participants tell me that they think this one was the best session yet. We’re just getting better, and we’re not going away! I should also alert you to the likelihood that many of the papers will be published in the SCSMI-affiliated journal Projections [15].

I thought, though, that I might participate a little at long range. So I’ve posted a web essay that sets out, in less technical terms, what my proposed paper for the convention would have tried to say. The essay, “Common Sense + Film Theory = Common-Sense Film Theory?,” reflects an effort to rethink ideas about filmic comprehension that I set out in Narration in the Fiction Film in 1985. This book was one of the first efforts to explore how findings in cognitive science might help us make progress in understanding cinematic storytelling.

I’d stand by much of what I argued there, but in the light of further thinking and later research (much of it conducted by SCSMI members), I wanted to float some ideas that recast and correct my arguments in the book. (Yes, I hope I’ve learned something in twenty-five years.) Some of my more recent notions are available in Poetics of Cinema and under the Film theory: Cognitivism [16] category on this blogsite, but the conference provided a good occasion to submit to the sort of friendly but pointed critique at which my SCSMI colleagues excel.

Of course, give me another twenty-five years and I’ll probably find fault with what I say now. Others won’t need so much time.

Start with this question, which I think is one of the most fascinating we can ask:

What enables us to understand films?

To my SCSMI cohort: I wish you a superb gathering. See you next year, at Sarah Lawrence! 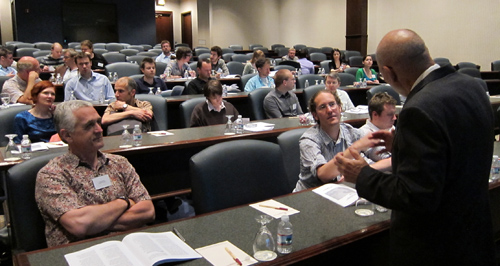 Joe Anderson, co-founder of the Society for Cognitive Studies of the Moving Image, opens the 2010 session at Roanoke.