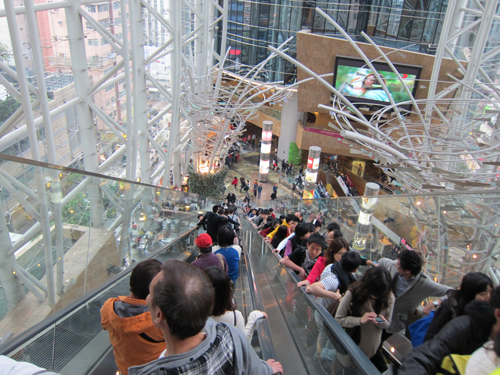 Above, a tourist pic, the view from one of several escalators in the towering mall in Langham Place. Its flamboyance makes a sharp contrast with the movie I saw in the mall’s cinema, the minimalist Turin Horse. (See below.) The very end of this entry presents another view from the heights of Langham. 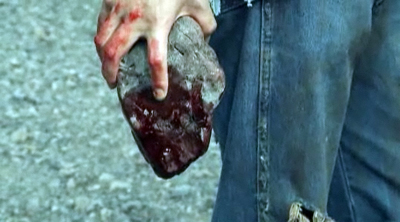 Most Hong Kong thrillers and action pictures use revenge as their mainspring. It’s fairly uncommon, however, for a film to try to convey the cost that vengeance exacts on the avenger. Punished, directed by Law Wing-chong and produced by Johnnie To, makes an effort in this direction. A mogul’s spoiled daughter is kidnapped, and his refusal to bend to the captors’ will leads one, in a moment of pique, to kill her. After learning of her death, the mogul contracts with his chauffeur, a man who knows the underworld, to track down the gang.

The tycoon, played by Anthony Wong, goes through some agonizing as he must hide his daughter’s death from the girl’s stepmother. In turn, the chauffeur, Richie Jen (whose skilful performance dominates the movie), must abandon his son after executing the boss’s revenge. The men’s lives dissolve in their quest for payback, and the fact that the daughter, a brattish cocaine addict, is completely unsympathetic only makes the whole thing bleaker. An obvious parallel is the Eurothriller Taken, which presents a rash but innocent daughter rescued by a father who remorselessly cuts down everything in his path. Well-mounted, with perhaps too many flashbacks, Punished is that unusual Hong Kong film that insists that every effort to assuage male pride takes a toll in male pain as well.

The stories link up. Sato, in numb grief, sees Tomoki on television vowing to kill Mitsuo when he leaves prison. Because the man who killed her family has committed suicide, Sato embraces Tomoki’s reckless vendetta. She grows up hoping to help him kill Mitsuo. At the same time, Kaijima’s son develops a sidelong relation with her….

I really haven’t given away much, because the film traces these characters and several more across the space of—yes!—four and a half hours. As in a novel, the motives and connections among characters emerge slowly. Zeze’s plot maintains a balance between suspense about what comes next and curiosity about the past. And as in most network narratives, part of the pleasure is wondering how the new characters we meet will tie into the ramifying web of relationships.

Zeze splits the film into two “acts,” with intermission, at a bold spot: ending the first part on a pitch of suspense and starting the second with a new set of characters, making us wait for the developments set up at the end of act one. Working on a broad canvas allows the film to shift majestically, in large blocks, from one person to another. The same goes for the ending: After the main drama is resolved, Zeze allows a long epilogue in which many of the film’s motifs are gently set to rest.

That drama and those motifs, unsurprisingly, bear on the power of unspeakable acts to ignite our desire for revenge. Every character, even those unaware of the savage deaths in the past, is altered by the central killings. An amateur rock singer, a young woman almost defiantly self-centered, becomes a devoted mother, which seems to yield some hope; but her family is eventually shattered by echoes of Mitsuo’s crime.

Those more directly affected by the killings face more severe tests. Kaijima, for instance, tries to compensate for his impulsive shooting by giving monthly money to the victim’s wife and daughter. (The irony is that the money comes from his sideline, moonlighting as a paid killer.) The daughter grows up expecting Kaijima’s payments as her due and tries to extract more money from him, as if he were her surrogate father. This daughter, along with Mitsuo the teen murderer and the older woman who takes him in, come to unexpected prominence as the film unwinds a tale of sorry lives and compromised choices.

Mostly shot in rough-edged, somewhat bumpy shots, Heaven’s Story at first made me fret: 278 minutes of this? I needn’t have worried. The pace is steady, even relentless, but I didn’t find it monotonous, and a more polished presentation might have lacked the distressed urgency of what we get. Incidentally, the framing bits, showing a sinister puppet play with Shinto overtones, are filmed with smooth care. The contrasts in technique suggest that a more serene supernatural domain exists alongside the anxious sphere of human desires, where people persist in trying to redress old sins by committing new ones.

The obscurity of the everyday 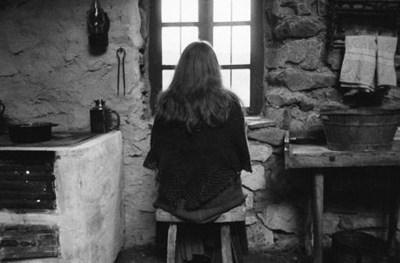 A horse is feverishly hauling a cart, the camera riding low underneath the beast’s plunging head. The wheezing repetitive score rises to a scraping whine, then it’s replaced by the sound of fiercely whipping wind. The old driver pulls the cart up at a farmhouse, where he’s met wordlessly by a younger woman. As the wind tears at them, they take the horse to the barn, the cracked leather harness left on the cart. Inside the cottage, the woman helps the man change his clothes. The woman boils a pair of potatoes. She says: “It’s ready.” It’s the first line of dialogue, and it comes nineteen minutes into the film.

Thus begins the festival film that has exhilarated me most so far, The Turin Horse. With this movie, Béla Tarr, a favorite of mine (especially here [5], but also here [6] and here [7]), has given us his most spare entry yet. Almost nothing dramatic happens during its 140 minutes, and what does take place is opaque and enigmatic. The film refuses traditional exposition, forcing us to observe bits of behavior and speculate on why things unfold this way.

At one level, it’s the heritage of Neorealism paying off. In Umberto D’s scene of the housemaid preparing breakfast, we had an early example of sheer dailiness used to characterize a person and a milieu, as well as to absorb us in what we might call mundane beauty. But something different, more abstract and disturbing, happens when a film is nearly all routine. In the farmhouse, the old man and his daughter eat their steaming potatoes barehanded, squeezing and mushing them. He wraps himself in a blanket and stares out the window while she does household chores. Next day they arise, dress, and hurl themselves again into the blasting wind. (The wind ripping along the wet streets in Sátántangó is nothing compared to this gale.) In all, cramped settings observed with Tarr’s usual tactile detail, rendered gorgeous in black and white, become as obscurely allegorical as the magical tabletop in Tarkovsky’s Stalker.

Other characters show up eventually. An hour in, a talkative friend arrives and provides a monologue cursing the ignoble forces that have driven intelligence from the world. Later some travelers appear outside at the well, with malevolent results. And the horse refuses to be fed. Perhaps at bottom the “story arc” is that light simply goes out of this world. Having dwelt on gestures (hands pouring out alcohol or struggling to harness the horse) and textures (the ripples of woodgrain on the stable door), the film slides into darkness. The motif is announced in the cryptic trailer [8] for the movie.

From Tarr’s comments we learn that the man is a carter and the woman is his daughter. The film’s voice-over prologue invokes an episode from the life of Nietzsche, who once tried to stop a driver from mercilessly whipping his horse. The incident purportedly led to Nietzsche’s descent into insanity. Tarr has said that the film, based on a short story by László Krasznahorkai (who also wrote the novel Sátántangó), tries to imagine what happened to the horse after the incident.

Yet the horse is less important in the film than the carter and his daughter. It’s not hard to see them living a post-Nietzschean world, and the visitor’s rant about universal debasement may offer support for this interpretation. It’s another exercise in what an earlier entry [5] called Tarr’s “postlude” vein, presenting what remains of life after history has more or less ended. Yet these are no stick figures in a metaphysical meditation. Virtually without psychology, father and daughter are defined through their sheer physical weight and movements. They confront the blasted landscape when they pass outside and the wind tears at them, but once inside they shift to the window to watch. The image of an observer trying to understand a harsh, senseless world beyond the walls is one we’ve seen in the opening of Perdition, and in the scene in which the obese doctor in Sátántangó planted at his desk tries to write down everything he sees happening outside.

Not that the cottage is any more welcoming. Splendidly filmed from a constrained variety of angles, the cottage seems bare of love, meaning, and what we normally consider drama. Tarr’s camera movements and the solemn rhythms of his shots (I counted only 37, including intertitles) are coordinated with the pace of the characters. Perhaps not since Dreyer’s Ordet has the lumbering pace of country life, the trudging gaits and reluctant effort to rise after sleeping, been rendered so expressively. Here, however, nothing is touched by grace

Tarr makes his inhospitable world spellbinding. I’m ready to watch the The Turin Horse again, even, or especially, if it proves to be Tarr’s last film.

For a detailed, less sympathetic review of Heaven’s Story, see Peter Debruge’s piece [9] in Variety. Suggesting that The Turin Horse will be his final film, Béla Tarr discusses it here [10]. At The MUBI Notebook [11], David Hudson has provided very informative coverage of the controversy around Tarr’s place in Hungarian cultural politics. For an interview with Tarr’s cinematographer, as well as a sensitive appreciation of the film, see Robert Koehler’s piece in the new [12]Cinema Scope [12]. 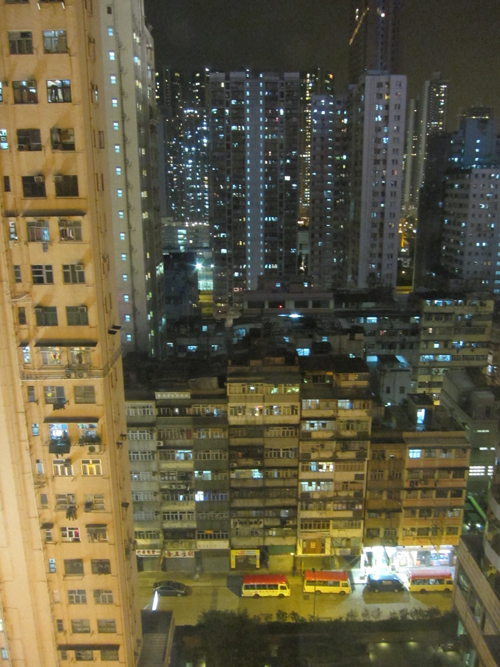