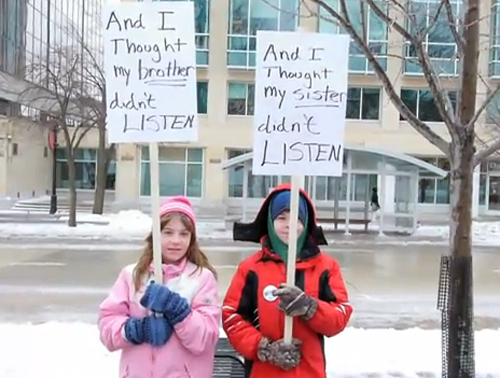 Kristin and I have been in Manhattan since the end of January. She has a fellowship at the Metropolitan Museum of Art for her Egyptological research  (on Amarna statuary; more here [2]). I’ve been getting together with old friends, going to movies, trying to get a little writing done, and, inevitably, surfing the Web. But who would have thought that Wisconsin in February would be so exciting?

We missed the eruption of protest that greeted Republican Governor Scott Walker’s plan to make the state’s public employees contribute more to their health care and pensions, as well as his effort to eliminate collective bargaining rights. So we’ve been forced to follow things through the wildly swinging spotlight of media. Still, the core story got through. We’ve been proud of our colleagues and fellow Badgers for resisting this aggressive assault on public sector unions. A batch of videos can be found here [3].

Cheeseheads on the march

Reading people’s comments on the Web I find some puzzling reactions. I’ll sum up a couple.

*Wisconsin workers have an exceptional contract in tough times; I pay a lot more for my insurance and pension. Stop being crybabies!

A. It’s not surprising that unions get their members benefits that non-union workers don’t get. You want a good deal? Consider unionization. Otherwise, you have no reason to complain that other people are more enterprising than you. (This is sort of parallel to the demand that you’re a loser unless you become “entrepreneurial.”)

B. If you want to see Wisconsin workers yanked down to your level, then you ought to be in thermonuclear fury about CEOs, stockbrokers, bond agencies, and investment bankers raking in such big bucks. Are you prepared to ask them to take the same cuts? It won’t do to say they’re in private enterprise, since their industries receive no-bid contracts, consultancies, government subsidies, tax breaks, and other deals on a scale that taxpayers are only now starting to realize. 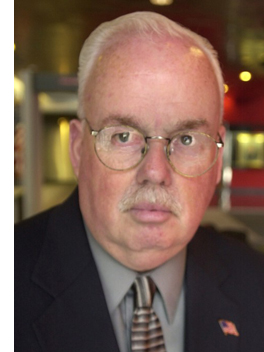 [4]C. Speaking of sweet deals, we have Walker’s preferred method of employee negotiation: Be related to the Fitzgerald brothers, Scott (Senate Majority Leader) and Jeff (Assembly Speaker). When their father Stephen (pictured right) was trounced 2-to-1 in his bid to become Dodge County sheriff, Governor Walker’s administration appointed him head of the State Patrol [5]. Dad’s salary, in these budget-cutting times that demand tough sacrifices from all? A plump $105,678 per year, as well as a strong pension—one, like those in other state law-enforcement sectors, that is exempt from Walker’s shared-costs mandate.

*Public sector employees are lazy. Teachers get two months off a year, and DMV clerks are rude. Actually, in Wisconsin the public schoolteachers work long hours and quite successfully; we get good educational results [6], ahead of those in non-unionized states. Moreover, all the DMV clerks I’ve met are very courteous and friendly. There are no rude DMV clerks in my state. (Please apply my reply, suitably altered, to any one-off recollections you have of lazy or rude  workers in any public sector–highway, police, firefighting, etc. Remember the motto: “The plural of anecdote is not data.”)

In sum, consider moving to Wisconsin if you want good services and friendly public servants. But if this bill is enacted, don’t come unless your last name is Fitzgerald.

The perplexity that is Jon Stewart 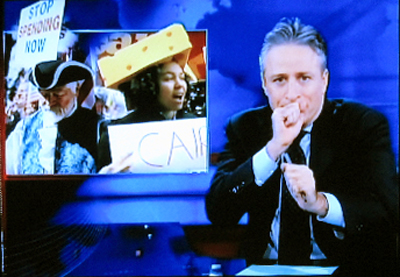 Kristin and I had another chance to be reminded of home on Monday. Along with sisters Diane and Darlene, niece Kamini, and friend Janice, we went to a taping of The Daily Show. Alas, photo-taking was forbidden inside, but that constraint was balanced by a nice surprise. Jon Stewart ran two segments about the Wisconsin situation. (Here is the program.) [8]I realized several things, including:

One Beast we should feed 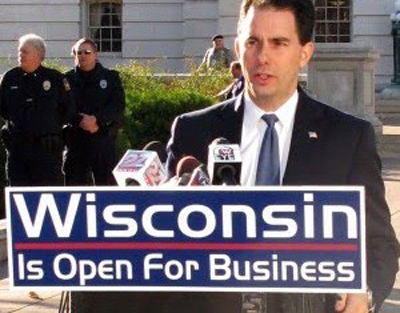 Far more entertaining than anything on The Daily Show was the prank played Tuesday by the Buffalo Beast. (Go here [12]: The Beast website has crashed, perhaps from excessive demand. Some backstory is here [13].) Walker was cheerfully eager to share his strategies in a twenty-minute phone call with somebody, anybody, claiming to be David Koch. Remarkably, in his chat with the purported out-of-state gazillionaire, Walker complains that many protesters seem to be “outsiders” meddling in his state’s politics. This after Koch has set up an agitprop storefront in Madison [14].

Can an ordinary citizen not named Koch or Fitzgerald command the Gov’s attention for twenty minutes on any subject? Let’s see! I’ll try to call him now….Oops, the state has shut off the phone line. [15]

Incommunicado, I can only mull the prospect of further consequences. Walker might suffer damage from his casual admission that he had considered planting troublemakers in the crowd. (He abandoned the tactic out of fear that it would backfire.) Personally, I’d prefer to see a bribery charge. During the call, Mr. Not David Koch invites my governor to be his guest flying to California for entertainment. My man’s reply: “Outstanding.” If Walker is recalled at the end of the year, this cozy chat will have shown decisively that he is simply too big a dunce even to be a governor.

For the time remaining in Walker’s tenure, the tête-à-tête suggests one way to save a chunk of change. Koch Industries has investments in many states; one of its Wisconsin firms produces toilet paper [16]. And Koch lobbyists have evidently been attracted by a little-noticed provision in Walker’s budget repair bill to sell off state-owned power plants via no-bid contracts. So we could smooth the transaction by simply asking the Koch brothers to pay this year’s salaries and benefits for the governor and all Republican legislators. That gesture would save at least $4 million in salaries alone. But $49,943 before taxes doesn’t go very far these days, so perhaps the legislators would organize to demand that the Kochs raise their wages. 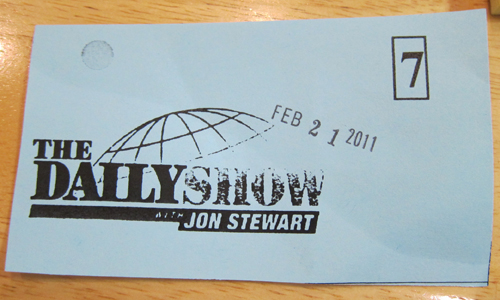 PPS 27 February: On the threshold of the evacuation of the Capitol: A probing, exhilarating on-the-spot report from Abe Sauer, including more information on the Kochs’ investment and presence in Wisconsin, is here [20].

PPPS 28 February: A CEO, a Tea Partyer, and a union member are sitting around a table. In the center is a plate holding a dozen cookies. The CEO reaches over and takes eleven. He then says to the Tea Partyer, “Watch out, that union guy wants a piece of your cookie.” (Thanks to Darlene B. [21])

PPPPS 1 March: Jon provides a somewhat more caustic treatment on Monday’s Daily Show [22]. Not hilarious, even a little smarmy, but further evidence that Jon is best when he’s not doing Houdini-like contortions to appear fair-minded.

PPPPS 4 March: Jon comes through at last [23] with what he does best.