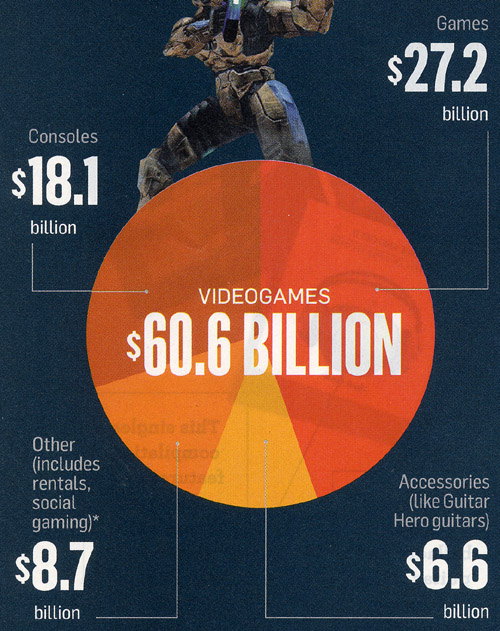 Since I got back from England a month ago, I’ve been catching up with all the magazines that accumulated during the three weeks I was gone. Recently I read the November 15 issue of Newsweek. Initially I was happy to see the “Back Story,” the one-page article that comes at the end of each issue. It’s called “How Super Is Mario?” and compares the income of the video games and move industries. (It’s not available online complete unless you agree to a free trial of the online magazine. If you do, it’s here [2].)

The article consists of two pie charts (above and below) and a brief text. At first the text sounded promising: “A big game—take September’s release of Halo Reach, for example—can sell millions of copies at about $50 a pop. That’s far pricier than any movie ticket, of course. But despite the conventional wisdom, the silver screen still rakes in more cash overall than the gaming industry, according to an analysis of recent revenue.” Great, I thought, at last a publication that makes an accurate comparison between the amounts of money brought in by games and by movies.

But in fact the Newsweek analysis just repeats the conventional wisdom it claims to overturn and makes the same old invalid comparison that entertainment-business journalism has been making since video games started making real money. A cursory glance at the pie charts makes it seem as if the gaming industry is not all that far behind films: the games total is $60.6 billion vs. $77.1 billion for movies. But let’s take a glance that isn’t cursory.

I’ll make the same point that I made in Chapter 8 of The Frodo Franchise (2007), where I deal with video games. There, too, I quoted a Newsweek article (from June 3, 2002): “In 2001, consumers snapped up $9.4 billion worth of game software and hardware—up 43 percent from the previous year—led by Sony’s world-beating PlayStation 2. Noting that the game industry had once again outstripped Hollywood’s box-office revenues, the head of Sony’s U.S. computer-entertainment division, Kaz Hirai, says his next target is the $18 billion home-video industry.” (225-26)

Note that reference to “software and hardware.” The figure includes the consoles and other equipment people buy in order to play games. But the pie chart of movie-industry income doesn’t include hardware. What would happen if the sales of theater and home projectors, DVD and Blu-ray Players, iTouches, and all the other gadgets used to watch movies were factored into the film-income figures? As we know, there have been a lot of digital theater projectors and 3D systems sold in recent years, not to mention all those portable media players. The games industry would fall farther behind than it already is. (And let’s not forget that most of those gaming consoles also play movies, so an indeterminate part of their income should go into the movies column. Since last January, the Wii even comes with a Netflix connection installed.)

As of 2004, the most recent year I could get figures for when I was writing my book, games software brought in $6.2 billion. That same year all forms of film distribution (including home-video and broadcast and cable television) grossed $45 billion.

Yes, games are gaining, but they’re not nearly as close to catching up with movies as media coverage would lead you to believe. The good thing about Newsweek’s recent pie chart is that it allows us easily to factor out the hardware income from the games’ side.

True, the games revenue has risen considerably in proportion to films since 2004. In that year, games made 13.8% of what films did. In the 21-month period covered by the Newsweek analysis, they made 46.6% as much.  Will there be as big a jump proportionately in the next five years? Maybe. It’s possible that the move into streaming downloads as a distribution basis for home video will mean that movies simply cost less per view and hence will lose ground against games in terms of total income, if not in terms of popularity. Still, methods of distributing games might end up making them cheaper as well.

None of this takes into account that most mainstream blockbusters spawn a lot more ancillary products than do comparable video games.

I don’t know why entertainment journalists keep making this basic and pretty obvious mistake of continuing to include hardware sales only for games when they compare the success of these two media. It is after all their job to research the figures and analyze them in the way most useful to their readers. Giving those readers the erroneous impression that video-game sales have nearly caught up with film income doesn’t seem useful. The myth is probably something that the gaming industry fostered years ago to give the impression that it was more successful than more balanced comparisons would reveal. Journalists kept making the same kind of misleading comparison, which became the “conventional wisdom” that Newsweek only thinks it’s correcting.

As I point out in the same chapter of my book, game companies and film studios are not entirely in competition with each other. They cooperate to a considerable extent, since movies and games are often part of the same franchises. Some of the same people work on both. Often similar or identical technology is used in creating both. Increasingly film studios big and little have their own game-production units, and gaming companies are seeing more value in creating intellectual property that can be used across platforms. Some of the top film directors have been involved in creating games. Films routinely get adapted into games as part of their overall franchises, and some games get adapted as films. A successful film usually makes for a successful game, though the opposite isn’t yet as common. Though the industries do compete for leisure time and money, neither is out to kill the other. In many cases they’re out to boost each other’s success. 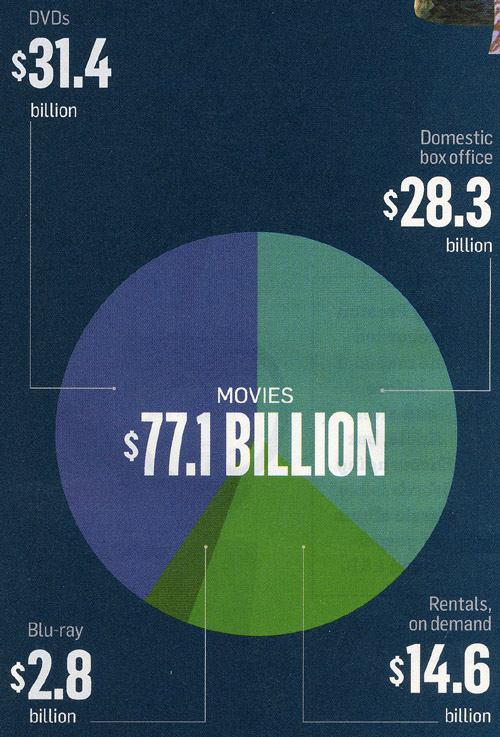