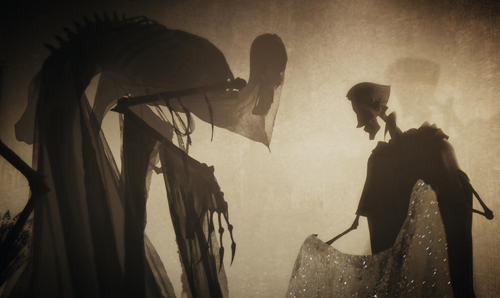 Last wee I went to see Harry Potter and the Deathly Hallows Part 1. Behind the pack, of course, since it had been out nearly a month. But I dislike watching films in a crowd. My ideal is to be alone in the theater, which David and I managed last week with Megamind. In this case I picked the first matinee on a school day and saw the film at our local Sundance multiplex. (Yes, even Sundance runs some popular films to help support the less successful art films.) I figured that noisy youngsters, even if they skipped school to see DH1, wouldn’t go to Sundance. I was right. Four or five adults were sitting about ten rows behind me. I never heard a peep or crackling candy wrapper out of them. The film was really film, too, 35mm.

I had been curious about how the filmmakers would deal with some of the stranger aspects of J. K. Rowling’s seventh and final book. Breaking it into two parts seemed an obvious and smart move, and it does have less of a rushed feeling than the previous adaptations had. But Deathly Hallows the book has some very unconventional aspects.

For a start, Rowling reveals dark, indeed downright nasty things alleged about Albus Dumbledore, who up to this point has been your standard-issue comic-but-wise, twinkly-eyed mentor figure. I wondered if the film would dare to do the same. It does, but so far only as a very minor side issue. In the first part, at least, Harry is obviously distinctly miffed that Dumbledore hasn’t left him more information about how to deal with horcruxes, but he doesn’t seem to feel that his hero had feet of clay.

Second, it seems downright perverse on Rowling’s part that in a long series which has come to focus on the search for horcruxes and should just be working up its climax, she throws another set of mysterious, lost objects, the three Deathly Hallows, at us. Let’s see, six horcruxes, three hallows. What’s the difference? Which should the characters be seeking, and why? Is Voldemort after them, too? In the book, Harry becomes obsessed with finding the hallows, even though the horcruxes are the main point. That last premise, Harry’s obsession, hasn’t shown up in the film, so far anyway, but otherwise the hallows are fully treated in the film.

Finally, Rowling gives us a very long portion of the book where Harry, Hermione, and, for a time, Ron, are fugitives moving from place to place, camping out each night as they try to figure out where the remaining horcruxes are—and not having much luck either with that or with destroying the one they have obtained. I personally think this is a rather daring move. Given that for this long section we are confined entirely to Harry’s point of view, we get little sense of what is happening in the outer world. Naturally the film can’t spend quite as much of its length on this period of nomadic existence. Still, it does devote an unexpectedly long time to portraying it.

Some critics have complained that the action stalls during this portion. Others have noted that the slow-down allows for us at last to linger over the psychological states of the three main characters, who are being worn down by fear, frustration, and the horcrux’s presence. This stretch also displays some beautifully bleak locations, well filmed. Plus, as Rowling no doubt intended, this part of the narrative conveys a real sense of the characters’ seemingly hopeless position: They are in great danger and without any apparent clue as to where to look next.

One minor obstacle that I remember noting when I first read the book is that the hallows are introduced by having Hermione read aloud a fairy tale from the book Dumbledore has bequeathed to her, The Tales of Beedle the Bard. The tale, “The Tale of the Three Brothers,” occupies only about two pages, but having someone read that much text aloud in a film can be deadly.

The filmmakers came up with a solution that is both inspired and extremely well executed. As Hermione reads, we see a roughly three-minute animated sequence that illustrates her words. 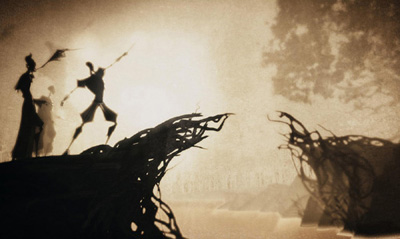 [2]The filmmakers have acknowledged that their model was Lotte Reiniger’s technique of silhouette animation, which she developed in the 1920s and used for such classics as The Adventures of Prince Achmed (1926). For DH1, similar silhouette effects are achieved with 3D digital animation.

I wondered who had designed and animated this little sequence and determined to watch for references to it in the credits. As is typical with effects-heavy films these days, several companies were listed and the credits rolled by too quickly for me to catch much. Still, I don’t think that the little film-within-a-film was mentioned specifically or its creator named as having been attached to it. Even Variety‘s review [3], which refers in passing to the sequence, doesn’t mention its maker.

A lot of other viewers were impressed enough to try and find out who was responsible. DH1 was released in the US on November 19, and by the next day, Cartoon Brew posted a story [4] on the subject: “A number of readers have written to ask who animated the shadow puppet-inspired ‘Tale of the Three Brothers’ sequence in the new Harry Potter film Harry Potter and the Deathly Hallows. It was directed and designed by Ben Hibon who produced it in association with Framestore.” Surprisingly, it also turns out that the section of Framestore that normally makes commercials did the “Three Brothers” scene.

I spent some time tracking Hibon down, finding some good-quality frames to display here, and locating clips. There are a few interviews with Hibon, plenty of clips and entire shorts, and filmographies. The video quality of some of these clips is dreadful, though, and a lot of the stories one finds via Google are short, repetitive pieces.

Most of this material is not all that easy to find, so herewith a guide to where you can most usefully find information on someone who seems to be an up-and-coming talent.

Hibon has designed video games, made music videos and commercials, done a short “screen” for MTV, and directed a few shorts and a trailer for a feature, A.D., which seems still to be in progress. The fullest filmography [5] is the official one on the website for Hibon’s own company, Stateless Films.

Animation and effects expert Bill Desowitz has interviewed Hibon for Animation World Network [6]. That’s recent, December 3, and deals exclusively with the DH1 scene. On November 23, fxguide posted an interview [7] with Dale Newton, the sequence supervisor for the piece. An older, undated interview [8] with Hibon on It’s Art Magazine concerns the series of five two-minute shorts collectively known as “Heavenly Sword.” These relate to a video game of the same name that Hibon designed. This series is visually quite distinctive, but it’s a far more conventional work than the “Three Brothers” short, being heavily influenced by anime.

Also on November 23, indiewire posted a short background article [9] on Hibon, with several videos. With one exception, which I’ll get to shortly, don’t watch these films here or on YouTube. Why? Because the Stateless Films [10] site has most of them and more. Hibon’s clips are larger and better quality than anything else I checked, plus they’re displayed with a black screen and far fewer distracting graphics than on YouTube. Click on the Archives link to see older works, including samples of Hibon’s work on videogames.

His site is the only place where I found a full version of his ad for the French bank, Crédit Agricole. The point of the ad is that this is the first green bank. It’s a gorgeous piece, full of images of pollution and decay gradually giving way to scenes of places restored to their pristine state and new, clean technology in place. Here are some images, from a vertical descent downward through a series of jet-trails (at bottom), a shot in which a wall of identical canned goods suddenly flies away to reveal a street market with fresh produce on sale, and windmills replacing old factory chimneys that fly apart:

There’s a dream-like quality to the whole thing, with a lot of shots, many with rapid movement, juxtaposed with slow, stately music.

The indiewire clips linked above include two shortened, English-language versions of this ad, with Sean Connery appearing to make the message explicit. There are also some Crédit Agricole ads made by more conventional filmmakers. Watch one or two of those, and you’ll find the contrast dramatic.

None of these sites and others with Hibon clips or shorts has the “Three Brothers” sequence, not surprisingly. That is, YouTube has some horrendous, out-of-focus subtitled auditorium videos, made in perhaps a South American or Spanish theater. Avoid like the plague.

Framestore’s site has some information on Hibon’s sequence, and the only clip from it [13] that I could find. It’s very small and too dark to render the subtleties of the visuals, but there it is. Framestore also animated the two house-elves, Dobby and Kreatur, and there’s some information [14] on that part of the project as well.

The January, 2011 issue of Cinefex [15] has a story on DH1 that will undoubtedly include a section on the “Three Brothers” animation, but I haven’t seen that yet.

One reason that there are so many short pieces on Hibon on the internet is that at almost exactly the same time, on November 22, Variety announced [16] that the filmmaker had been signed to direct a long-dormant New Line project, Pan. It’s a variation on the Peter Pan story, with the roles of villain and hero being switched; here Captain Hook is a detective on the trail of a certain child-kidnapper. The studio acquired the project in 1996, and for a while it looked as though Guillermo del Toro would direct. This time the film might get made, since the Variety story reports that it’s being cast and should start shooting next fall.