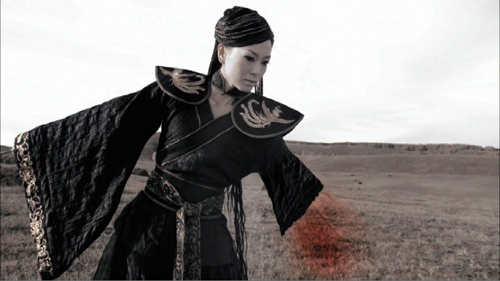 First, the news flash: Tonight was the awards ceremony for the Dragons & Tigers [2] competition for young filmmakers here at Vancouver [3]. A jury doesn’t get more distinguished: it consisted of (left to right) Jia Zhang-ke, Denis Côté, and Bong Joon-ho. 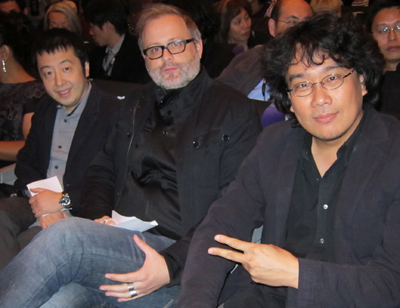 They awarded two special mentions, one to Phan Dang Di’s Don’t Be Afraid, Bi! [5] (from Vietnam) and to Xu Ruotang’s Rumination [6] (China). On the last-named, check the still at the end of this entry.

The grand prize went to the Japanese film Good Morning to the World! [7], by Hirohara Satoru. 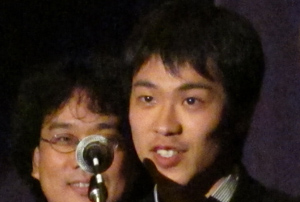 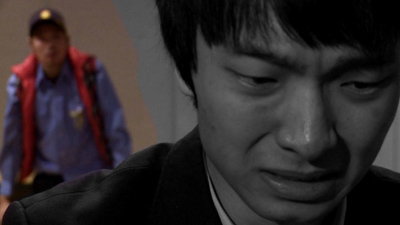 My Film and My Story.

Vancouver is unusually hospitable to shorts and features by newcomers. Two of this year’s D & T offerings illustrate how talent, unlike youth, is not wasted on the young.

A cinémathèque featuring classic films is about to reopen, and the manager has hired some twentysomethings to help her get things into shape. The result a network narrative: romantic rivalries, coming-of-sexual-age crises, the race to set up the screening space, and even a ghost story are woven together as the big day approaches. The film is split into eight chapters, each given an emblematic movie title. Two petty thieves interview for a job under the aegis of “Stranger than Paradise,” and an apparent love triangle is christened “Jules and Jim.” The cinephilia shapes the plots too, as when one boy gets the courage to kiss another after watching Happy Together.

My Film and My Story was a group project of students at the Art and Design School of Konkuk University in Seoul. Their professor proposed that each student write a script about the opening of the cinematheque, and the results were integrated into a single feature-length story. There were seven student directors, one per episode; a producer contributed an extra chapter. Most directors were on the set all the time, making suggestions and trying to fit bits together. (“We fought a lot.”) The remarkable visual consistency—smooth cutting, tight framing, and well-modulated lighting—came from the single director of photography. As the title suggests, some of the tales are based on incidents in the lives of its makers.

The film, presented in Vancouver by two of the directors, Hong Youjin and Kim Taeho, is a lively charmer, with plenty of comedy and pathos.  The characters are quickly introduced, and there are nice touches of movie-nut satire. One girl with big spectacles saves all her ticket stubs, takes notes on every movie (I can identify), and is annoyed when a boy drapes his leg over the seat in front of him. The episodes make tactful use of digital techniques, particularly in one shot that fuses past and present through the classic color/ black-and-white disparity.

My Film and My Story wasn’t in the official young-film competition, but Icarus Under the Sun was. For once the ragged style of handheld video justifies itself in a tale of a girl who quits school and heads for Tokyo to work in a seedy mahjong parlor. Haruo rooms with a flighty roommate and her boyfriend, but becomes more attached to the workers in the parlor and the owner, a nearly blind, taciturn man for whom she conceives an almost daughterly affection.

The plot barely rises above anecdote, but it’s continually engaging through its focus on the performance of Abe Saori, one of the two directors. Haruo explains that she is “addicted to walking,” and some of the best scenes involve conversations during late-night wanderings in the bitter cold.

Starting out fairly choppy, the narration accumulates weight and breadth as Haruo becomes engaged in her work. The shots throughout are held rather long, but about halfway through, the scenes start to be built out of exceptionally long takes. When another worker, the boy Aran, takes sick, Haruo calls on him and we get an almost suspenseful treatment of her arrival in his apartment, with him lying almost motionless in a heap in the foreground. 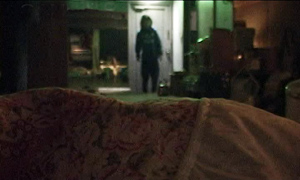 The shot lasts almost four minutes as she comes forward to talk with him. Their subsequent conversation is filmed in a tight, leisurely shot as they eat burgers and explain their backgrounds—virtually the only exposition we get about Haruo’s troubled past. 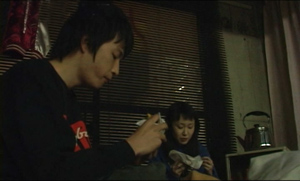 The dingy look of many scenes carries a documentary conviction that a more polished work would not. And the rough texture is actually the product of patient care. Abe and her codirector Takahashi Nazuki explained that they spent ten months in shooting and two to three months in editing. But it’s no mere technical exercise either, since Abe calls it both a fictional film and a documentary about her experiences. Like her protagonist she spurned conventional schooling and went to Tokyo to live on her own. Rooming with Takahashi, she decided to make the film “to know certain shadows” in her life. Icarus Under the Sun is actually the duo’s second film, and they have already finished a third, the more technically slick Soft-Boiled Egg (Hanjuku tamago.). Another thing about young directors: They have energy. 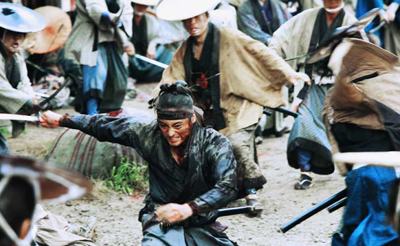 Takashi Miike’s 13 Assassins is not what you might expect. Unlike your typical Miike item, this one throws no curves. It is an old-fashioned, butt-stomping, gut-slashing swordplay movie, with swagger to spare. Adapted from a 1963 film, it’s Seven Samurai plus six, with explosives.

True, there’s a Miike signature moment early on that shows what Lord Noritsugu has done to a woman’s body in his quest for piquant entertainment. But this horrifying scene serves a very traditional purpose: To prove to swordmaster Shinzaemon Shimada (and us) that Noritsugu has failed his duty as a leader and must be assassinated. He isn’t merely brutal. He lives an aesthetic of exquisite savagery. He has turned droit de seigneur into performance art. A massacre, he says with a fetching smile, is fun. He is a handsome monster. We can hardly wait to watch him die—preferably like a dog, in the mud, in agony.

Thereafter all that we want from a chambara flows forth in abundance. Unsurprisingly, the plot is framed by the man-out-of-time motif. Noritsugu’s depraved tastes show that the samurai tradition and the Shogunate government have become decadent. This might be a warrior’s last chance to die nobly—but for what? What deserves a man’s loyalty? Hard times have convinced Shinzaemon that the samurai class must ultimately serve the people. But his old rival Hanbei, Noritsugu’s right-hand man, clings to the notion that the samurai serves his master, unswervingly. Hanbei goes to his death committed to traditional duty. But his commitment is proved unworthy when his lord has a little fun with his severed head.

Miike faced a choice. He could have provided each warrior a vivid backstory, differentiating and humanizing each one as Kurosawa did. Instead, given a two-hour running time, he concentrates on strategy: How can a baker’s dozen of fighters defeat Noritsugu’s troops, which will eventually swell to 200? The solution is to maneuver Noritsugu’s men into a village filled with traps that will give the assassins some advantages—surprise, rooftop ambushes, and a deployment of livestock as ordnance. Things are enlivened by a feral hunter, mocking the samurai code while wielding a mean slingshot. After supplying a sketch of each of the thirteen assassins, Miike spends his energy on action. The muddy, gory battle at the climax lasts forty-plus minutes, and is worth every penny of your admission. Magnet, the genre arm of Magnolia, has picked up 13 Assassins for early 2011 release, and you should start thanking them already. 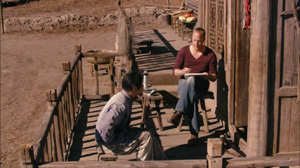 If Miike surprises by doing something normal, Zhu Wen’s Thomas Mao really does keep you guessing. It’s a pleasure to see a movie in which you can’t imagine what will come next.

At first, things seem to go by the numbers. To a remote Chinese farm comes the artist Thomas, to stay a short while and do some drawing. His wizened host Mao provides bed (after the geese are shooed out) and board (mostly corn on the cob). The trouble is that Thomas speaks no Chinese and Mao speaks no English. Every interchange is a pas de deux of misunderstanding. Thomas generously gives Mao some money. Mao refuses—not, as Thomas thinks, because he’s too proud but because Mao considers the amount insultingly small.

So we seem to have the small-scale cross-cultural comedy, making amusing points about people’s petty differences. Then the ghosts arrive.

At least, they might be ghosts. A phantom swordsman and swordswoman float around Mao’s farm and do battle, ultimately slashing off each other’s arms before disappearing, never to return.

There are aliens too, invading Mao’s cabin with pop-concert glow sticks. They’re totally unexpected, like the warriors, and their visit is even more transitory.

Eventually Thomas leaves, and the film starts over. The second part offers a sort of crazy-mirror image of what we’ve seen so far. Artist becomes model, model becomes artist, dog becomes Doggy. If you like the double-track story of Syndromes and a Century, you’ll probably like Thomas Mao, which is less rigorous but more funny. (The very title is part of the joke.) Zhu, who has reveled in comic byplay in Seafood and South of the Clouds, gives us that rare thing, a movie that is whimsical without being precious. You learn about contemporary Chinese painting in the bargain. 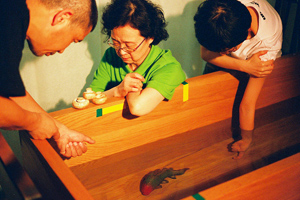 More whimsy, also not overbearing: When Liu Jiayin told me last spring that she was making a movie about a plastic fish, I didn’t know what to expect. The answer comes in the short film 607. Here the ballet of family hands seen in Liu’s Oxhide II [15] becomes more playful. 607 is part of a promotional series of shorts [16] by independent filmmakers, and it’s sponsored by a Beijing hotel, The Opposite House.

Mr. Fish, wielded by Liu’s father, swims around the tub, occasionally flirting with a mushroom provided by her mother. Eventually Mr. Fish is tempted by a hook (the curled finger of Liu herself). Will he fall for it? In all, you have to admire the coordination of three people shifting smoothly offscreen around the tub, each person’s hands sliding out of one part of the frame and popping in somewhere else—somewhere, I need hardly say, fairly unexpected.

PS 9 October: This entry has been corrected from its initial appearance. There I had written that Liu Jiayin’s 607 is one of three films she is making for the series commissioned by The Opposite House. Actually, the entire series consists of three films made by independent filmmakers. 607 is one of those and is complete in itself. Thanks to Shelly Kraicer for the correction. 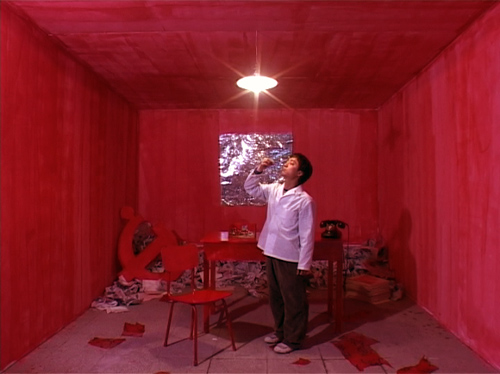