Josette Andriot, decked out for Protéa.

Kristin here, with more from Cinema Ritrovato in Bologna:

When one thinks of female masters of disguise and action in the silent cinema, Musidora as Irma Vep in Feuillade’s Les Vampyrs probably springs first to mind. But for the historian, hovering always in the background was the legendary film by Victorin-Hippolyte Jasset, Protéa (1913), with Josette Andriot in the lead role. We knew the film mainly from a frequently reproduced image of the heroine in a black outfit, one of many she wears in the film. 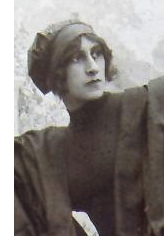 [2]Andriot was unconventionally beautiful, with dark hair and eyes and strong rather than delicate features. She was a genuine athlete, hired initially by Jasset for her riding ability, though he later exploited her acrobatic abilities in chases and scrambles around buildings.

Protéa has now been restored, though there is still missing footage. The heroine’s partner is Lucien Bataille, looking rather like a particularly devious James Cagney in the role of L’Anguille (“The Eel”), whose quick-change abilities and athleticism match hers. The thin, episodic plot revolves around a classic Macguffin, a treaty between two imaginary, vaguely Eastern European countries. The pair must acquire the document and hold onto it through one danger after another, outnumbered and chased all the while by a ruthless gang of spies for the other side.

I was startled by how modern the film seemed. Critics today tend to claim, inaccurately, that big action films throw some big thrill at the audience every few minutes. Protéa really does. The underlying purpose of the plot is to have the two leads escape from one sticky situation and change disguises, only to land immediately in another sticky situation. It’s essentially a serial boiled down into a feature.

The term “cinema of attractions” was originally coined by Tom Gunning to describe very early films that depended on novelties rather than narratives. These days, many academics apply the phrase to almost any film, old or new, boasting a lot of action and big special effects. But I’m tempted to use it of Protéa anyway. Jasset usually doesn’t keep Protéa and L’Anguille in any one disguise or situation long enough to exploit the initial premise. One moment she’s pretending to be a man; next thing we know, she’s an elegant partygoer and L’Anguille is a servant. The basic problem is that whenever the characters get into trouble, they don’t rise to the occasion by exploiting their current roles more cleverly. They just flee and assume a new disguise to try again. As a result most of the individual episodes remain unmemorable.

One exception is a sustained sequence showing the couple as traveling animal trainers. At one point they crawl into the cage and play with a real lion, and they stay in these disguises long enough to actually use the big cats to fend off their pursuers. The final hectic chase, with Protéa on a bicycle fleeing toward a bridge set aflame by the villains, is the most impressive passage we can enjoy as sustained action. (I won’t reveal how it comes out, except to say that the climactic moment prefigures a modern action heroine driving a bus toward a gap in an unfinished freeway.)

Protéa is fun, in large part due to the talent of the two leads. It’s a pity that this was Jasset’s penultimate film. He died in hospital before it was released. (His last film, La Danseuse de Kali, also starring Andriot, was recently rediscovered by our friend Hiroshi Komatsu and was shown in this year’s festival.) Perhaps Jasset would have developed into one of the major directors of serials. Still, one can see why Feuillade, who knew how to build suspense by stretching out a scene’s action, became the French master of the form. In an earlier entry [4], I mentioned that for some years French comic director and actor Pierre Etaix [5] had not controlled the rights to his own films (two shorts and six fiction features). During that time, they were out of circulation and unavailable in any format. That situation has finally been rectified. Etaix has recovered the rights, and all the films have now been restored. They were re-premiered earlier this year at Cannes, and two were included in Il Cinema Ritrovato: the short Heureux anniversaire (1962) and the feature Le grand amour (1969).

Etaix’s early work in the cinema was during the 1950s as an assistant to Jacques Tati, and he is widely seen as having been greatly influenced by Tati. That’s true to some degree. In Le grand amour there are gags using sudden peculiar noises. Although the plot centers around the hero Pierre, his wife Florence, and his in-laws, there are nosy neighbors and waiters through whose eyes we are occasionally asked to view the action. When Pierre’s friend gives him instructions on how to behave on an upcoming date with his pretty secretary, bar patrons assume that they’re witnessing two gay men flirting.

Still, Etaix’s general approach is not particularly Tatian. He does not play a continuing character from film to film. In Le grand amour, as the young husband lured into managing his father-in-law’s factory, he dresses in conservative suits and casual wear; no Hush Puppies, striped socks, and too-short raincoat for him. Pierre succeeds in his dull job, unlike Hulot, who makes a mess of things when given a low-level job at his brother-in-law’s factory. The neighbors watch Pierre not because he is eccentric, but because they jump to wrong conclusions about his mundane behavior.

More importantly, though, Le grand amour creates a great deal of its humor with a technique that Tati would never use. He frequently shows hypothetical alternatives to the scene at hand. What if Pierre’s sophisticated friend were married to Florence? We see a scene played out with the friend in his place. There is a dream in which Pierre’s bed drives like a car along a country road, encountering other bed-cars and finally picking up the new secretary, hitchhiking by the road. When Pierre finally dares to take the secretary out to dinner, he launches into a nervous, boring monologue on business prospects, and we see him as she does, successively older and grayer with each reverse shot. When the gossipy neighbors pass along a story about Pierre, we see the successively exaggerated versions played out one by one, from the reality in which he merely tips his hat to a pretty woman he passes in a park through overt flirting to a passionate encounter behind a bush.

Le grand amour is not as funny as Tati’s films, but that probably results from an explicit melancholy that underlies this tale of disillusionment with marriage and final acceptance of the realities of life-long love. At times it reminded me more of the playful moments in Truffaut, especially in Shoot the Piano Player. Whether or not one wants to place Etaix in the New Wave, his play between reality and fantasy would seem to put him in the category of “ludic modernism” that Malcolm Turvey spoke about in his paper at the recent Society for the Cognitive Study of the Moving Image conference [6].

The restored print was beautiful, with the kinds of bright and pastel colors and high-key lighting that one seldom sees in the drab films of today. Presumably the new copies will show at other festivals and in art-houses with DVD releases to come.

Bologna brings out a bevy of critics, historians, programmers, and unabashed film lovers of all stripes. Herewith, a sampling from DB.

Dick Abel and Virginia Wright Wexman, both distinguished scholars, flank a copy of Dick’s book, French Cinema: The First Wave [14]–presumably kept under glass like the rare specimen it is. 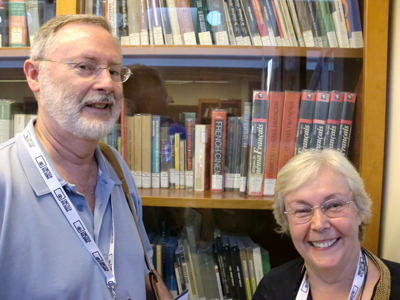 Curatorial cuddling: Haden Guest of the Harvard Film Archive [16], Adrienne Mancia [17] retired from MoMA (and once a UW Badger). 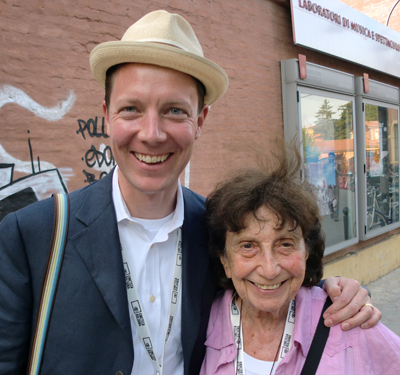 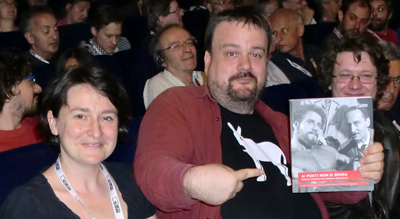 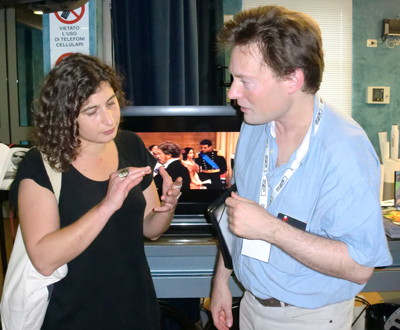 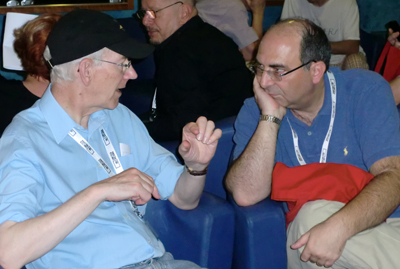 David Meeker, master of British cinema and jazz on the screen [29]; Matthew Bernstein, author of Walter Wanger [30], a study of the Leo Frank lynching, [31] and other studies of film history and culture. 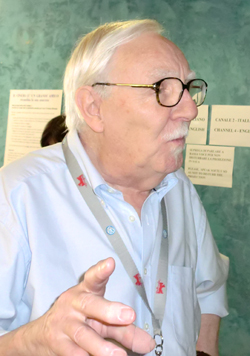 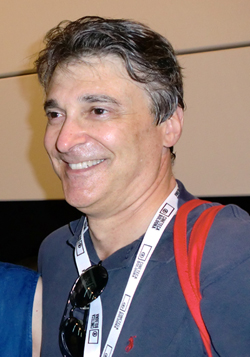 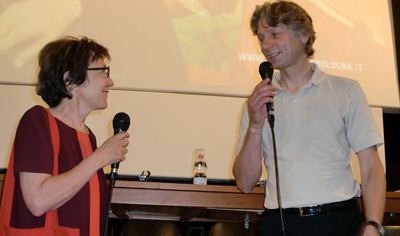 More to come in at least one more Bologna-based entry! 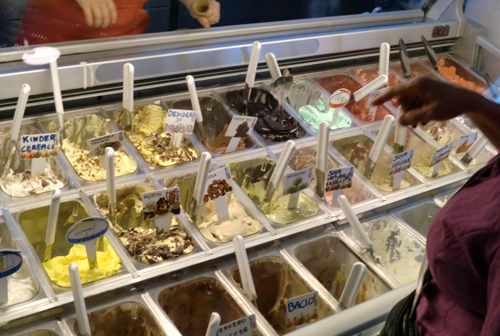