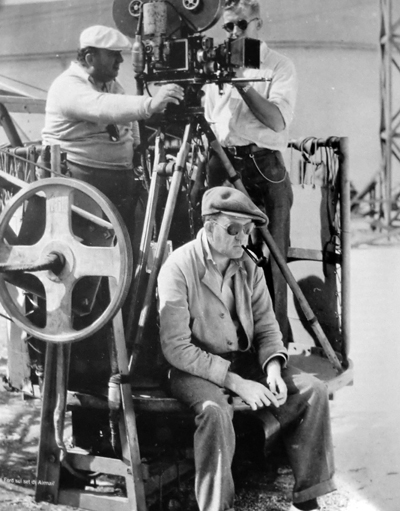 This is the busiest installment of Cinema Ritrovato [2] I can recall. We scarcely have time to sleep, let alone blog. The coordinators Peter von Bagh, Gian Luca Farinelli, and Guy Borlée have outdone themselves in offering something for everybody, from early films to postwar French and Italian rarities up through a tribute to Stanley Donen and special screenings of The Leopard and Metropolis. Our attention has been riveted by the 1910 programs and an extensive collection of films directed by Alberto Capellani, a little-known master of silent film.

One headliner is the early Ford series: all his surviving silents, plus a selection of rarely-seen talkies. The first one screened, The Black Watch (1929), concentrates on intrigue in the Khyber Pass [3] during World War I. Captain King is assigned to India while the rest of his Scots regiment is sent to Europe. In India, King masterminds the defeat of the forces of Yasmani, a woman who has been taken as sort of a goddess by her followers. The central section, involving Yasmani’s passion for King and his betrayal of her, seems to me sketchy and rushed; Ford’s real interest, not surprisingly, is in the rites of comradeship among the Black Watch. Twenty-two of the film’s 91 minutes are taken up with the opening dinner celebrating the regiment, conducted while King gets his assignment. Since his mission is secret, he abandons his comrades and suffers their opprobrium. A bookended sequence at the close shows him returning to the Watch as, in the trenches of war, they hold another dinner, complete with ruffles and flourishes.

Some of the central portion was directed by Lumsden Hare, but it too has some striking moments, perhaps most memorably the display of Yasmani’s powers when she conjures up an eerie vision of the European battlefield in a glowing crystal ball. The war sequences have the dank Expressionist look that Murnau brought to Fox and that Ford exploited in Four Sons (1928). There are as well touching train-station farewells between brothers and between father and daughter, all of which seem very Fordian. Overall, Ford finds ways to avoid the multiple-camera shooting common to early talkies, often using offscreen dialogue during reaction shots.

Also fairly free of multicamera work was The Brat (1931). Like many talkies derived from a creaky Broadway play, it entices us with a “cinematic” curtain-opener. Cops (including the young Ward Bond) hustle perps into night court, all captured in a flurry of high and low angles, bursts of deep space, and swift tracking shots. Afterwards things slow down, enlivened by some social satire (the pretentious novelist writes with a quill pen), a few sight gags (an artist’s muscled model who discovers he’s been rendered in a faux-Cubist image) and an all-in grappling fight between a society dame and a girl from the other side of the tracks. According to Ford, the fight got its impact from the fact that the actresses couldn’t stand each other.

The first silent Fords were introduced by Joe McBride [4]. “When the real West ended,” Joe remarked, “the cinematic West began.” Born soon after the closing of the frontier, Ford was fascinated by cowboys and Native Americans. Early filmmakers were to a surprising extent celebrating the stoic Indians uprooted and forced to give up their way of life, and this resonated with Ford. The elegiac quality we find in The Man Who Shot Liberty Valance (1962) and other late films, Joe suggested, was already there in the genre. Ford’s own first Westerns, thanks partly to the presence of Harry Carey, carry an air of resignation to history. Even the fragmentary sequences surviving from The Secret Man (1917), in which Harry must sacrifice his freedom to save a little girl, have a severe melancholy.

Hell Bent (1920) has long been famed for its flashy, unrepeatable shot: A carriage pulled by horses tumbles into a ravine; the camera tilts down to follow the crash; and then the horses, freed at the top, come hurtling back into the frame to pass the wreckage. Otherwise the film is consistently agreeable, suffused with Fordian camaraderie among drunks and respect between hero and villain. This last element is starkly dramatized when Harry and his adversary, having wounded each other in a gun duel, must crawl through the desert together.

On my first viewing, I didn’t see in Hell Bent the inventiveness and grace notes I admire so much in Ford’s first feature, Straight Shooting (1917). As we’ve mentioned before [5],  this film shows a mastery of the classical Hollywood style that emerged in the late 1910s. It bears comparison with William S. Hart [6] films of the period, high points of filmmaking craft. Late in the plot Ford give us a shootout with ever-tighter framings that could have come out of Leone. 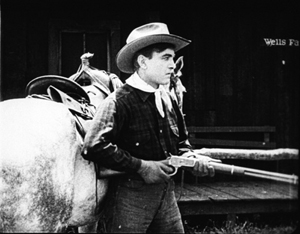 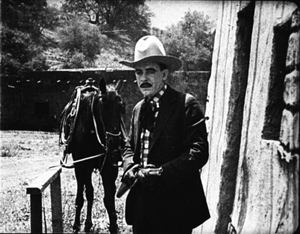 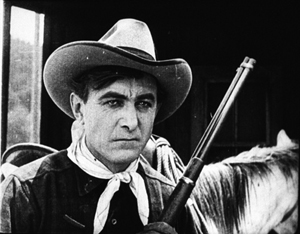 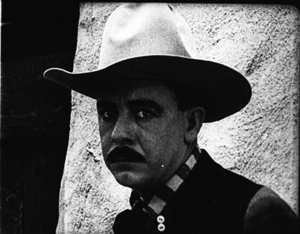 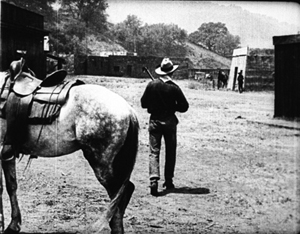 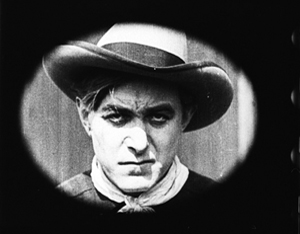 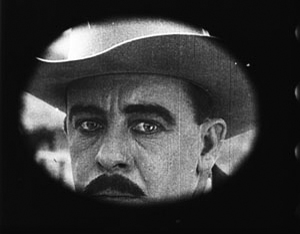 Whether Ford invented this particular piece of cinematic rhetoric we can’t say; too many silent films are lost. But coming from a 23-year-old filmmaker in his first feature, this remains a remarkably assured use of the continuity editing system for 1917.

Ford’s debt to Griffith has often been noted, and in this movie it turns up in unexpected ways. At one point Joan tenderly puts away the plate her dead brother had used, as if to preserve it. Later, Ford recalls the gesture when the cabin is under siege and bullets blow apart other plates on the sideboard. But Ford has already quietly suggested an association between brother Ted and Cheyenne Harry; as Joan kisses the plate before putting it away, Ford cuts to Harry outside, and then back to Joan slipping the plate into a drawer. Using the then-current technique of a “ruminative cut”, the editing suggests that Joan may also be thinking of Harry, and he of her. The idea of Harry replacing Ted is made explicit at the end when Sims plaintively asks Harry, “You be my son.”

The Griffith influence is particularly acute in Straight Shooting’s climax, when the farmers are under siege in the Sims cabin. Horsemen gallop around the cabin as hired gunmen pepper it with bullets. Meanwhile, Cheyenne Harry has persuaded Black-Eyed Pete’s gang of outlaws to rescue the settlers, and Ford gives us a rousing passage of rapid crosscutting. It’s a canonical last-minute rescue, straight out of the climax of The Birth of a Nation (191t5).

Or more particularly, I think, out of The Battle at Elderbush Gulch (1914). Griffith commonly staged interior scenes with doors at the left and right of the frame, letting actors play laterally. The strategy can be considered somewhat theatrical, in that we never see the “fourth wall” that would in reality enclose the characters. 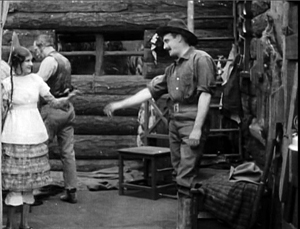 But this leads to problems when you want to show your characters surrounded. In Elderbush Gulch, the settlers are besieged by encircling Indians. At one point, Griffith cuts from the exterior of the cabin to the interior, and to convey the sense of enclosure he has one of the settlers firing “through” the fourth wall, as if over the heads of the audience! 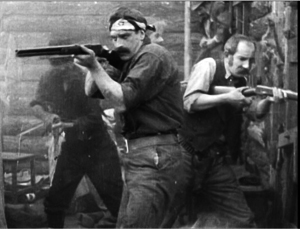 This is an awkward compromise, but at least give Griffith credit for grasping that his dollhouse playing area doesn’t fully render a realistic space. In Straight Shooting Ford provides a more three-dimensional rendering of interiors. Even though most scene in the Sims cabin lacks Griffith’s side walls, the set yields layers of depth, and the famous door in the back of the set opens on to the porch and the farm outside. 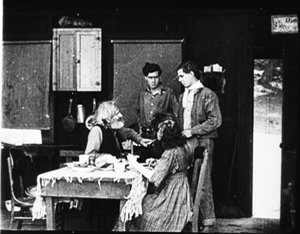 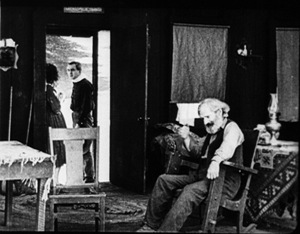 During the gunmen’s siege, we get a strong sense of enclosing space by virtue of the cuts of men firing from different angles. In addition, the cabin interior displays a little more angular depth. 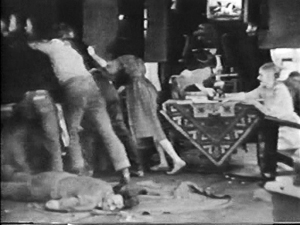 But even Ford can’t escape compromises. We never see the space “behind us” in the Sims’ cabin, and as the farmers take up positions at windows, Ford shows us old Sims readying to fire by turning toward the camera and, like Griffith’s settler, aiming through the fourth wall. 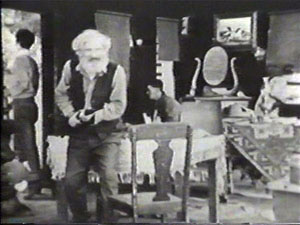 The two shots of Sims in this posture go by fast, and they’re less noticeable because the siege hasn’t quite begun. Still, the anomaly indicates that in this setting Hollywood technique still doesn’t give the sense of a wraparound space that we get in the exterior scenes, like the shootout. A few years after Straight Shooting, American directors would master the ability to build up a four-walled interior through careful cutting. Those techniques would then be exploited for dramatic effect, as in Lubitsch’s Lady Windermere’s Fan (1925).

More to come, but now I must rush off to a morning of early film! If you’re hungry for more in the meantime, visit our category Festivals: Cinema Ritrovato for highlights of earlier years. 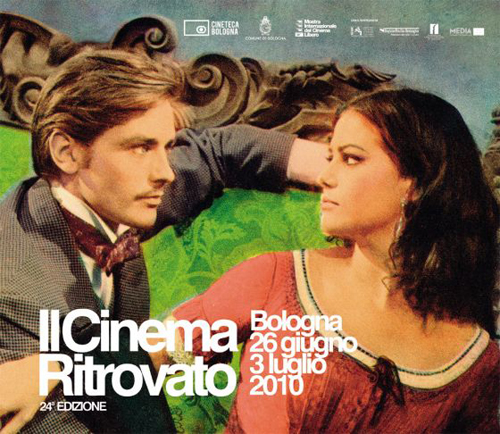