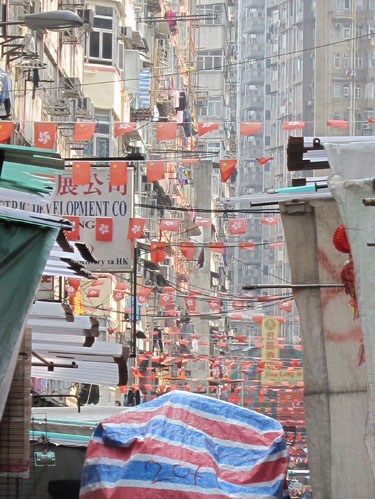 Thanks to the Film Festival and screenings at the Film Archive, I’ve skipped gratefully through nearly a hundred years of local film history. 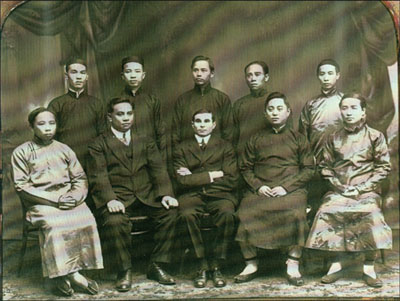 First things, or rather first films, first. Last year local authorities declared 2009 to be the centenary of Hong Kong cinema. The long-standing claim (repeated in my Planet Hong Kong) was that To Steal a Roast Duck, aka The Trip of the Roast Duck, was made in 1909 and was the first locally produced fiction film. The controversy arose because the claim was based on later recollections of filmmakers. No fiction films from that era survived. We had no contemporary evidence that the Roast Duck was made in that year or that it was the first anything. Perhaps it wasn’t even made at all? In a blog entry last year [3], I summed up the arguments.

Now, thanks to the persistence of Frank Bren and Law Kar, we can come to more reliable conclusions. At a conference in December, scholars from around the world gathered at the Hong Kong Film Archive to discuss early Chinese cinema. One of the results was further revelations about the territory’s first film.

We know that at some point the Ukrainian-American entrepreneur Benjamin Brodsky came to Hong Kong and set up a film unit. (The picture above shows him surrounded by nine Chinese co-directors of the company he founded in November 1914.) An earlier Brodsky company made Roast Duck, among other films. But when?

At the conference Law Kar announced the discovery of a 1914 Moving Picture World interview with Roland Van Velzer, a photographer recruited from New York by Brodsky. During his stay in what he called “that queer land” of Hong Kong, Van Velzer shot four films in 1914.

We did a first native drama, entitled “The Defamation of Choung Chow.” With my experience and guidance the picture turned out well and when shown in public proved to be a wonderful drawing card. . . . The reason of its great popularity was because it was a Chinese piece entirely. . . . We made three other subjects during my stay there. These were: “The Haunted Pot,” The Sanpan Man’s Dream” and “The Trip of the Roast Duck,” the latter a rough “chase” picture. All of these pictures had phenomenal runs at the native theaters.

According to Van Velzer, then, the first film, made and shown in 1914, was what is now known as Chuang Tzi Tests His Wife. Roast Duck was evidently the fourth film made by the team that year.

Brodsky is significant not merely because he supported talent in producing the colony’s first fictional films. He also made long documentaries about China and Japan that played in the US. He seems to have been a colorful guy. In his barnstorming circus days, he once purged a lion with castor oil. Full details are here in an article by Bren and Kar [4]. In the meantime, we can look forward to a more plausible centenary of Hong Kong film in 2014. 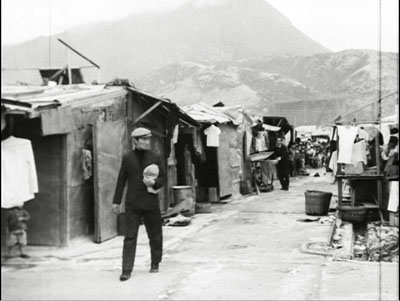 The Story of a Discharged Prisoner.

Hop ahead to the 1960s. Although the local language of Hong Kong is Cantonese,  movies in Mandarin rule the market, with Shaw Brothers providing gaudily colored costume pictures, musicals, romantic dramas and comedies, and of course rather violent swordplay exercises. By contrast films made by Cantonese companies under tiny budgets look threadbare. Yet a few filmmakers tried to make Cantonese cinema more vigorous and innovative, and the most influential was Patrick Lung Kong.

Lung Kong was born in 1935, and by the time he was thirty he had performed in virtually every production role, from screenwriting and producing to publicity and distribution. Well-known as an actor since 1958, he graduated to directing in1966 with Prince of Broadcasters. His second film, The Story of a Discharged Prisoner (1967) was a landmark in local cinema, expressing sympathy for an ex-convict who tries to avoid being pulled back into crime. Lung Kong goes on to make many of the socially critical films of the period: Teddy Girls (1969), Hiroshima 28 (1974), and Mitra (1976). He ceased directing in 1981 but continued to work as an actor and distributor. He now lives in New York City, but he came back for the retrospective that the Film Archive has mounted.

I had seen some Lung Kong films in earlier visits to Hong Kong, but the retrospective will allow us to assess his career as a whole. Virtually none of his films are available on DVD, and none, as far as I know, with English subtitles. Particularly important, apart from the works I’ve mentioned, are his heavily censored film about a plague striking Hong Kong, Yesterday Today Tomorrow (1970) and the bitter domestic drama Pei Shih (1972).

When he started in the industry, he says, “I ran into these acquaintances who taunted me by saying how I was trying my hand at making Cantonese chaan pin [shabby films]. That was very insulting to the film profession in general…so I promised myself to go in and change things when the opportunity arose.” For him, change meant both modernizing Cantonese film technique and tackling social problems.

[6]Lung Kong’s cinema, all agree, has a strong moralizing bent. He focuses on social problems—juvenile delinquency, nuclear war, prostitution, the exploitation of women in marriage. The films mix sensationalism, partly as audience bait, and social criticism. The Story of a Discharged Prisoner, reimagined by Tsui Hark and John Woo as A Better Tomorrow (1986), is at once a gangster tale and a harsh comment on the poverty that drives men to crime. Lung himself, armed with calisthenic eyebrows, plays the police officer hounding the protagonist. The Prince of Broadcasters begins as a pointed critique of popular culture, where schoolgirls fasten obsessively on a playboy radio personality. The film devolves into a more traditional thwarted-lovers plot when the protagonist reforms through his (mostly) chaste relationship with a wealthy girl.

Lung’s film style is self-consciously 1960s modern, with zooms, calculated compositions, and handheld passages. He cuts fast, avoids dissolves, and offers fairly complex traveling shots. Looking at the cheap sets and listening to the awkward sound (including snippets of classical music and The Great Escape grabbed from LPs), one becomes aware of what a Cantonese director of the day was up against. So if the technique seems at times forced, you can at least admire Lung’s attempt to give his films a contemporary gloss.

The films were of crucial importance for local culture of the 1960s and have had continuing influence on younger directors. A very informative book of essays and interviews, produced to the usual handsome standards of the Film Archive, is in Chinese but includes a disk with a digital pdf of English translations. Two of the texts can be found here [7]. 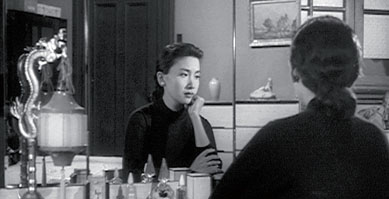 Another hop. I know nothing about Louis Fei, except that he was the brother of Fei Mu, whom I’ll be talking about in an upcoming entry. Romance in the Boudoir (1960) recasts the core situation of Fei Mu’s masterpiece Spring in a Small Town (1948). The situation, drawn from Romain Rolland’s novel Jean Christophe, is simple: A woman in a loveless marriage is visited by her former lover. In this version, her husband is a miserly doctor who wants the lover, Qin, to help him get a hospital post. Qin’s presence in the household rekindles the old romance and the couple hover on the edge of adultery.

Romance in the Boudoir is a bold piece of work. It opens with a prologue showing husband and wife trudging through Macau, utterly distant from each other. On the soundtrack we hear a woman singing about marriage as a prison. When Qin arrives, a parallel sequence traces him from the harbor to the household as a male vocalist sings of his weariness and broken heart. These melodic soliloquies will be evoked later in the film, when Qin and Suxuan stretch out by the fireplace and start to sing as the camera circles them.

Louis Fei makes maximal use of the house set, letting the vast staircase dominate the action on both floors. Repeated setups from the top of the stairs show the bannister cutting diagonally into the frame, pointing like an arrow to the climactic moment at the front door in the distance. Over everything hovers erotic tension, lasting several minutes during one scene when the former lovers tentatively touch one another before recoiling and then drawing toward one another again. If the doctor is somewhat caricatural, the portrayals of the wife and lover show a great subtlety, and the use of props, notably a glass of milk, is nicely modulated. This film shows how comparative large budgets enabled the  Mandarin-language companies to make films of a high production standard, both in script and execution.

Now jump to 2010. Dante Lam is the hot new action director on the local scene, after the success of Beast Stalker (2008) and The Sniper (2009). Actually, like most overnight successes, he’s been at it awhile. He made an admirer of me with Jiang Hu: The Triad Zone (2000), which has one of the most graceful passages of graphic cutting (involving a red umbrella) that I’ve seen in recent Hong Kong film.

He’s back with the first big action film of the season, tagged with the barely adequate English title Fire of Conscience. The action scenes are better than the plot, which is better than the eternal impassivity of Leon Lai, a pictorial cipher in nearly every role he assumes. Still, you have to reckon with a film that includes not only a thrilling car chase, a truly scary gunfight in a restaurant, and grenades tossed around pretty casually but also  a pregnant woman locked in a car slowly filling with carbon monoxide. The topper comes in the very last few shots, which provide as gruesome a flashback image as I’ve seen in quite some time and justifies the key line, “Save for revenge, what else is there?”

Visually, Fire of Conscience never surpasses the bravado of the black-and-white CGI opening, during which the camera coasts through a snapshot of action and lets clues float and scatter around the frozen characters. (It’s admittedly gimmicky, but more hypnotic than the comparable Watchmen opening.) Still, it’s exciting genre fare. What hath Ben Brodsky wrought?

Photo of Brodsky and colleagues by courtesy of Mr. Ronald Borden. The interview with R. F. Van Velzer was published in Hugh Hoffman, “Film Conditions in China,” Moving Picture World (25 July 1914), 577. Thanks to Frank Bren and Law Kar for this information, and to Tony Slide for calling attention to the article. The quotation from Lung Kong is from Clarence Tsui, “Scenes of the Crime,” South China Morning Post (22 March 2010), C1. 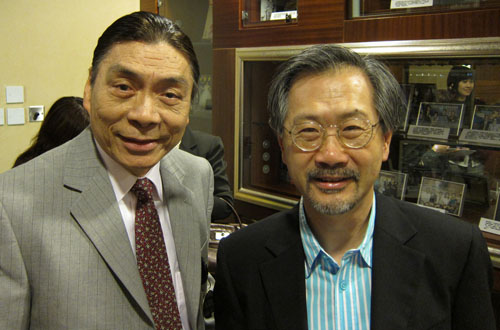