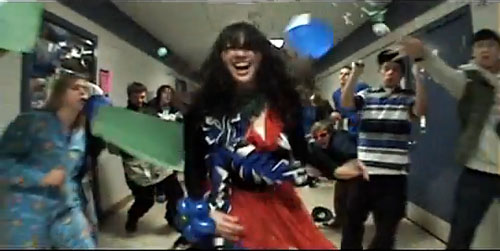 “There is really no such thing as Art. There are only artists.” I tend to interpret the disarming opening of Ernst Gombrich’s Story of Art as a protest against the idea that art has an essence that unfolds through history. Those of us in film studies can spot the heritage of this Hegelian idea in one standard story that is told about how editing came to be a dominant technique. According to the formula, editing is “essentially cinematic,” but this essence didn’t reveal itself immediately. It emerged in phases, thanks to the insights of brilliant creators (Méliès, Porter, Griffith, the Russians). Understanding cinema’s history, according to this view, means tracking how film revealed its inherent nature.

In saying that Art doesn’t exist, Gombrich isn’t trying for an elaborate philosophical argument. He’s suggesting a way of understanding art history. His abrupt two sentences suggest that the historian shouldn’t presume that any art has an essence, a secret core that dictates how its history unfolds. He proposes seeing continuity and change in what we call the arts as springing from concrete activities of individuals and groups. Cinema’s history then becomes an account of the creative decisions of filmmakers faced with particular demands and problems. Some of those decisions can converge across the community. The results are trends, such as the increased use of editing, which have real consequences but which are aren’t the result of some secret, essential process.

Once we try to analyze art in terms of what creative communities have sought and achieved, we can ask how artists tend to behave. Across his career, Gombrich stressed that artists are sensitive to their circumstances. What tasks are assigned to the artists? What are the traditions and current fashions? What are the tastes of patrons? What constraints are put on the art-maker? How is art taught? How can the ambitious artist achieve distinction? (“What is there for me to do?”) What are the tricks of the trade at any moment? How do artists borrow from one another? And how might they compete with one another?

We often underrate competition as a stimulus to creativity.  Gombrich notes that “the Dutch masters vied with each other, trying to outdo their rivals in certain accomplishments.”

Stressing the relevance of traditions not only implies an attention to the way art feeds on art; it should also make us aware of the cumulative nature of any such skill. What happens in such a hothouse atmosphere is that ambition leads to competition and frequently also to specialization, as it notoriously did in Holland.

In cinema, we might profitably consider competition as one source of the diversity within a tradition. I suspect that the great Soviet directors of the 1920s not only shared ideas but also competed by testing ever farther-out ideas about cutting. They also specialized in the manner Gombrich suggests by cultivating particular effects or genres: Pudovkin’s character-driven pathos, Eisenstein’s dynamic crowd effects, Kuleshov’s exploration of  popular genres, Dovzhenko’s boldly elliptical storytelling. I’ve often thought that the Warner Bros. cartoonists probably walked out of the first screenings of Disney’s Snow White and the Seven Dwarfs (1937) with heavy hearts. How could they match that? They didn’t try. Instead, they cultivated something quite different: raucous, cynical, high-speed farce. And today, doesn’t it seem likely that Avatar took its final form as an effort to go beyond the CGI efforts of earlier directors—to prove that the director of Terminator II and The Abyss was still the King of the World of SPFX?

Boys and their long-take toys 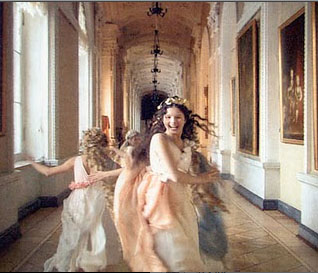 One of the most visible arenas of cinematic competition is the sustained tracking shot following several characters. It requires a sort of virtuosity, or at least logistical skill, in coordinating everything—the speed and consistency of the movement, the passage of people in and out of the shot, the consistency of framing and focus, the timing of new information. Once somebody has executed such a shot, the challenge is thrown down to others. Can you make yours longer or fancier?

In The Way Hollywood Tells It, I noted that Brian De Palma saw just such a challenge in Raging Bull’s famous tracking shot from the dressing room to the prizefight ring. “I thought I was pretty good at doing those kind of shots, but when I saw that I said, ‘Whoa!’ And that’s when I started using those very complicated shots with the Steadicam.” This sort of schoolyard one-upsmanship is probably what Christine Vachon had in mind when she called the single-take scene a “macho” choice.

There are some longer-term trends as well. Elaborate takes used at the start of a film can be found in the 1930s and 1940s (e.g., Ride the Pink Horse, 1947), but Welles laid down a clear marker in the opening of Touch of Evil (1957). Thereafter, starting a movie with an intricate, sustained camera movement became something of an emblem of directorial ambition.

Already, however, Dreyer, Ophuls, and Mizoguchi had used long takes, usually with camera movement, as building blocks of a film’s overall design. With Rope (1948) Hitchcock raised the possibility of making an entire film out of even fewer such shots, an initiative continued  by the Hungarian Miklós Jancsó, who developed the choreography of such shots to a new level by incorporating crowds, zooms, and rack-focus passages. Béla Tarr and Gus van Sant have been modern exponents of the technique.

It was probably inevitable that somebody would try to make a feature-length film consisting of a single moving shot. Josh Becker’s Running Time (1997) renders a heist in what purports to be one take; there are cuts, but they’re pretty well disguised. Sokurov’s Russian Ark (2002; above) uses video technology to create a feature out of one genuine take, “a single breath” as he called it. At the same time, Sokurov added the condition that the shot would be an exploration of a labyrinthine space, in this case the Hermitage, and a trip through different eras of Russian history.

My lipdub can lick your lipdub 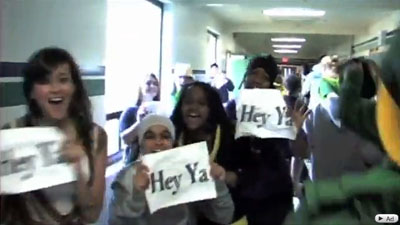 Perhaps it was Russian Ark, or maybe just TV walk-and-talks [4], that inspired the recent cycle of single-take video lipdubs. In these the camera moves through a locale and picks up one person after another, all lip-synching the soundtrack. September’s massively popular lipdub from l’Université de Quebec à Montréal [5] may have furnished the prototype. In the US, a pair of current examples neatly illustrates how borrowing and competition among moviemakers can yield intriguing results.

As you probably know, Shorecrest High School in Shoreline, Washington, mounted a very complicated lipdub—one take coasting through the school, picking up dozens of teens lipsynching to Outkast’s “Hey Ya!” before they all assemble in a theatre for a final shout-out. There are some somersaults too, which make any movie better. It is here [6].

But high school rivalries resurfaced. Shorewood High School, traditionally at odds with Shorecrest in sports and band, struck back with a lipdub of Hall and Oates’ “You Make My Dreams Come True.” The new entry raised the stakes by shooting the action backward, somersaults included. Here [7] it is.

There’s no shortage of backwards videos [8], but the Shorewood clip plays in clever ways with our biases in perceiving movement. Because we’re wired to grasp motion as advancing in time, we can’t easily reconstruct the actual movement that the figures executed. After seeing the film many times, I still found it hard to visualize the actual progression of the shoot, starting from the assembled crowd and ending on the young woman running backward to the vehicle that pulls away. (A forward version is here [9].) Moreover, both forward and backward motion have an uncanny symmetry, so that it’s hard to detect the latter except through subtle cues like the way garments fall or a gait with a special snap. Even the moments that flaunt the reverse-motion device, such as things originally tossed down into the frame, seem instead to fly up and into the hands of bystanders.

The stakes have been raised. What will Shorecrest come up with? A radical change of angle? (An entire lipdub done from a very high or low vantage point?) Or maybe a more demanding location? (With spring coming, I’d vote for a miniature-golf course.) Anyhow, my imagination is more limited than the filmmakers’. All that matters for my purposes is that the very fact of competition gave birth to a pair of ingenious and sprightly movies.

If you’re thinking that I wrote this simply to give everyone who Googles “Gombrich lipdup” at least one result, you miss my point. Just as Gombrich was never shy about using advertising imagery and children’s drawings to illustrate some basic principles of visual psychology, so we ought to notice any examples that vividly show how artists strategize in order to create something new within a tradition. Which is to say: Yes, I consider the young filmmakers of Shorecrest and Shorewood artists. Why not?

Gombrich’s essay on Dutch painting first appeared as “Mysteries of Dutch Painting,” New York Review of Books 30, 17 (10 November 1983), 13-17. It is reprinted in his Reflections on the History of Art (London: Phaidon, 1987). Shorewood has supplied a sort of making-of bonus here [10], with some more challenges to Shorecrest thrown in. To see the genre coopted by politicians (who apparently can’t get all their cohorts together in the same space), go here [11] (thanks to Camilla Lugan). Maybe US politicos could get some more support if they tried bopping like this? They could hardly look sillier than they do already.

PS 31 January: Jason Mittell of Middlebury College has alerted me to his students’ lively long-take lipdub [12] on the virtues of recycling.

PPS 1 February: Yogesh Raut writes that another historical precedent for the dueling lipdubs would be one older than the Quebec one I cited.

In your recent entry on lipdub videos you cite a video made in 2009 by students in Quebec as “the prototype.”  I think a more likely candidate is this video made by a company called Connected Ventures and first uploaded in April 2007:

While there have obviously been a ton of similar videos made since then, I think the folks at CV (who I have no connection with) probably deserve a little hat tip as innovators.  Of course, it’s possible that they were copying someone else, but in general they seem to be recognized as the starters of the craze (see here [14], for example).

It’s good to learn this. There are probably other precedents as well. I’d just say that a prototype need not be the first work in a genre tradition; rather, it’s a fully developed, typical instance. We take Little Caesar as a prototypical gangster film, but it’s not the first. The Connected Ventures project is indeed a single take, and it follows various people lip-synching. But it doesn’t explore a building in a targeted way, making the revelation of new space add visual variety, and the walking characters seldom pass us from group to group in tight choreography (it relies more on loose pans). Like other early efforts in a genre, it seems simpler and rougher than later entries. I suppose that supports my point that competition can spur filmmakers to surpass their peers; it seems that later lipdub adepts took up the challenge to make the single take more intricate. Still, I should probably have called the Canadian video “a prototype” rather than “the prototype.” Many thanks to Yogesh for calling my attention to a particularly early work in the genre.