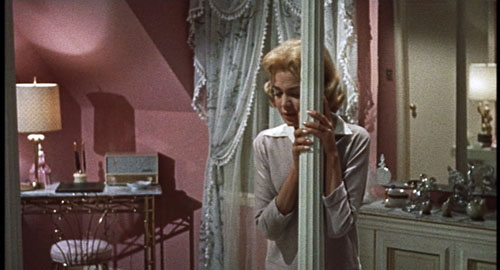 I do not like finding phallic symbols in movies.

I grant you that there are some films that deliberately evoke the love wand: Tex Avery cartoons, Frank Tashlin and Jerry Lewis movies. Surely the Wolf in Avery’s Red Hot Riding Hood (1943) has more than a Platonic interest in Red’s stage show. 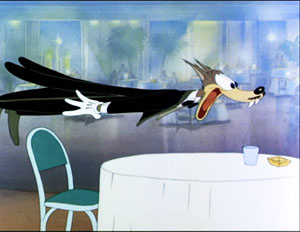 But some critics/ academics look way too hard. For them, as a literature professor of mine put it back in the mid-1960s, phallic symbols are everywhere in art. And I learned fast that he meant everywhere, from the Odyssey to Emily Dickinson. I changed sections.

Films, of course, are full of images that encourage the hunt for avatars of the skin flute. So for forty years, I’ve argued against interpretations of a scene that depend on reading you-know-what into anything that resembles a pole, post, or pylon—any  vaguely tubular shape, slender or squat, organic or mechanical. It is a duffer’s mistake to think that film shots including swords, logs, telephone poles, pine trees, skyscrapers, Greek columns, fountain pens, picket fences, shovels, rocket ships, and Pontiac fins always pay homage to the trouser snake.

Except, I must admit, bedposts.

I don’t think I’ve ever slept in a bed with bedposts, not even in those cozy B & Bs that smother you with affection and sugar-sprinkled muffins. But the American cinema likes bedposts. Red-blooded American women in classic movies often have beds braced or decorated with bedposts.

Sometimes those bedposts do some alarming things.

Exhibit A: Start, as we often do (but probably shouldn’t), with D. W. Griffith. In The Birth of a Nation, Elsie Stoneman has just spent a romantic afternoon with Ben Cameron, aka The Little Colonel. 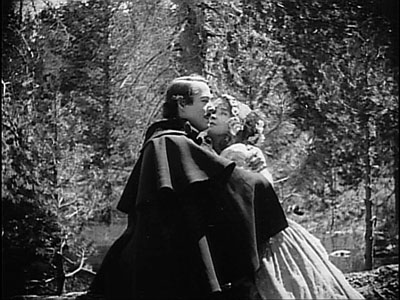 She races into her bedroom, obviously smitten. 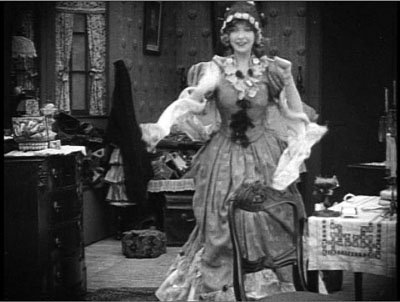 What does she do? She hops to the bed and leans dreamily against the fancy tapering bedpost. Now Griffith gives us the closest image of her that we’ve seen so far in the movie. 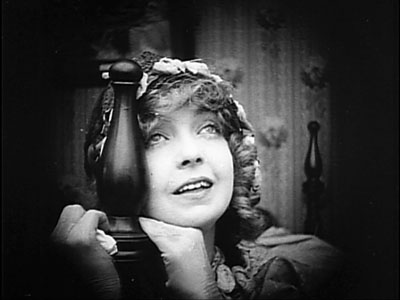 And since Griffith never passes up a chance to crosscut between anything and anything else, we get another shot of Ben, perhaps looking off toward Elsie’s house. (We have to say perhaps because Griffith is not terribly concerned with consistent eyelines.) It operates as a typical Griffith signal that one character is thinking about another. 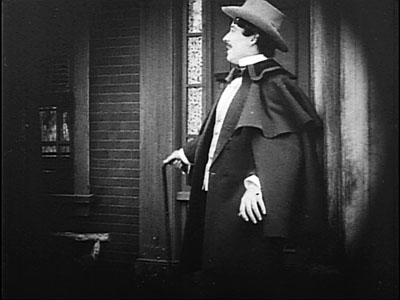 And as if aware that Ben is thinking of her, Elsie rewards her bedpost accordingly. 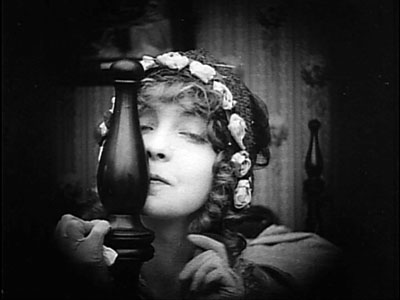 Should you doubt that these bedpost calisthenics are connected with the thought of a guy, I submit Exhibit B. In Bringing Up Baby, Susan Vance (Katharine Hepburn) is taken with David Huxley (Cary Grant). While he showers, she wraps herself around the only thing in the room taller than she is. 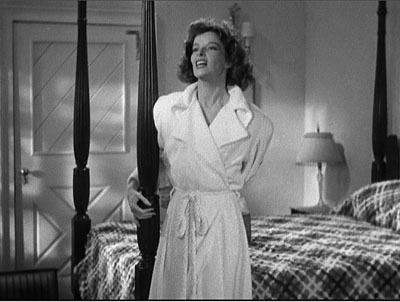 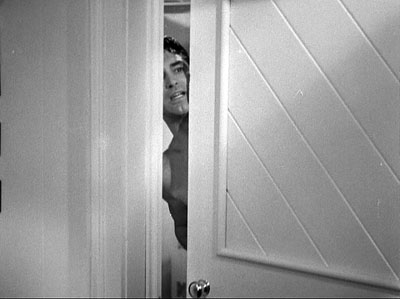 One can easily see why a glimpse of Cary Grant stepping out of the shower could make somebody clutch a support , but wouldn’t a chair have done as well?

Exhibit C: Douglas Sirk has done interesting bedpost work in Imitiation of Life (surmounting this entry), but surely his triumph is Magnificent Obsession (1954). A blind Helen Phillips (Jane Wyman) has just learned that no operation is likely to recover her sight. Helen rises from her chair, and we hear a wordless choir along with a piano theme evocative of Rob (Rock Hudson), the mysterious man in her life. As if drawn by magnetism, she makes her way through the darkness to a totemic mass, sort of Elsie Stoneman’s bedpost on Viagra. She moves with the solemnity of a priestess paying homage to an angry god. 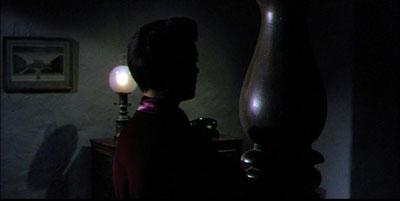 Actually, this thing isn’t exactly a bedpost; it’s a strange thrusting protrusion from a love seat that functions as a room divider. But it’s clearly in the bedpost tradition—as we see when, like Elsie, Helen embraces it and leans her head against it. 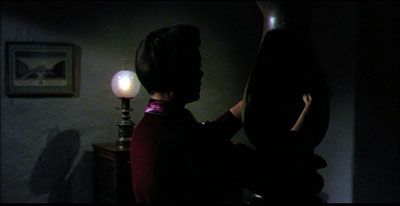 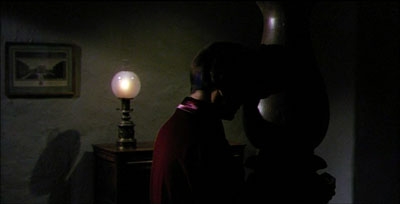 Soon Rob enters, framed by the post, and in no time the couple are in a clinch. 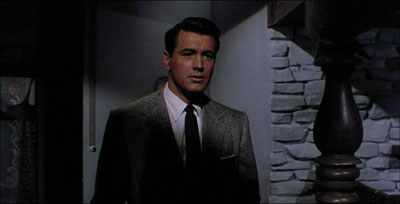 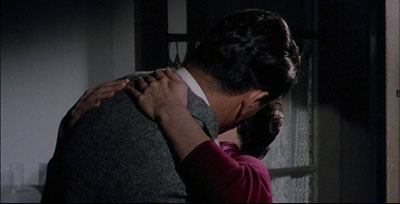 If forced to interpret these items, I’d probably say that Griffith may have included The Bedpost in a moment of frank eroticism, Hawks knew the cliché and exploited it for an actor’s bit of business, and Sirk, sophisticated Euro émigré, used it ironically. But of course these interpretations are open to dispute. I expect someone to start a dissertation on the matter immediately.

I don’t know of comparable scenes in which men, thinking of women, hug bedposts or crawl into big cavities. Bedpost worship can obviously be interpreted as another sign of Hollywood’s bias toward patriarchal values. But its blatancy and more or less witting silliness also respond to that quality that delighted Parker Tyler about Hollywood movies—the way that flagrant symbolism is flung onto the screen but toyed with, to tease us. For Tyler, the “only indubitable reading of a given movie” was

its value as a charade, a fluid guessing game where the only “winning answer” was not the right one but any amusingly relevant and suggestive one: an answer which led to interesting speculations about society, about mankind’s perennial, profuse, and typically serio-comic ability to deceive itself.

Sometimes, then, a bedpost is just a bedpost. But probably not in the movies.

My frame enlargements from a 16mm print of Magnificent Obsession aren’t good enough in the scene I mentioned, so I’ve been obliged to draw my images from the Criterion DVD. That version crops the frame to 2.0:1, which has seemed too radical for many observers, me included. Should it instead be 1.66 or 1.85? The aspect-ratio debate has played out in extensive detail here [1] and here [2].

Thanks to Lea Jacobs and Jeff Smith for some DVD loans. Jeff also encouraged me to keep this discussion in good taste. 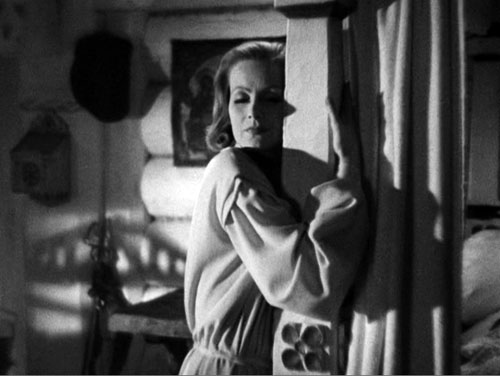