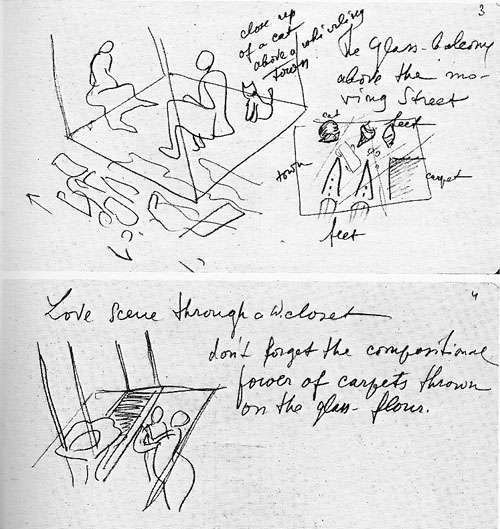 Or rather, two piles. One stack of consumer durables that I brought home from seven weeks in what we Americans call Yurrp, and another stack of things that came while I was gone.

DVDs of course stand out. Apart from items scooped up in Bologna [2], here are a few highlights. Some are quite old, some very recent, but all were new to me.

The Magnificent Ambersons, on a Region 2 disc [3] from Montparnasse, in cooperation with Cahiers du cinéma. The squarish box houses a slim booklet, a remastered copy, and bonus documents: interviews with Bill Krohn and Jean Douchet, and a 51-minute conversation between Welles and Bogdanovich. Plus the original trailer.

Engineer Prite’s Project, Kuleshov’s first film from 1918. It’s from Absolut Medien [4] in collaboration with Hyperkino, which we wrote about last year [5]. German subtitles only. Comes with a 54-minute documentary by Semyon Raitburt on the Kuleshov effect.

Another German release, but with English subs: Finally, the 1983 Stuttgart production of Philip Glass and Constance de Jong’s gorgeous Satyagraha [6]. For once PoMo staging enhances the story. In the hammering opening of the second act, the mocking laughter of the South African whites comes from a vast row of beer swillers. The pre-HD imagery is a little soft, but my ancient Beta off-air copy can finally be laid to rest. From Arthaus Musik. 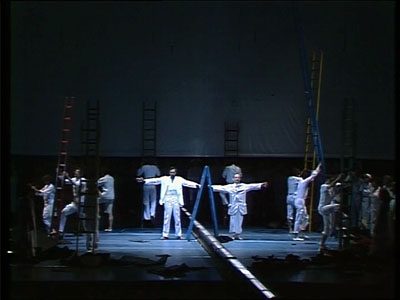 Absolut Medien also gives us The New Babylon [8], one of the greatest but least-known Soviet Montage films. The original Shostakovich score has been used, and the German reconstruction has English subtitles. Apparently a UK edition [9] is on the way. The film is hard to cope with digitally: Lots of fog, smoke, and steam; diffuse photography; shots with significant action in out-of-focus planes. Still, it’s a big improvement [10] on the bargain French edition in circulation. Tom Paulus, a real gentleman, surrendered the last copy in Bruges to me.

The venturesome French company Carlotta has launched an Oshima collection, though it doesn’t seem to appear on the Carlotta website! I found three must-have items at Fnac [11]: A Treatise on Japanese Bawdy Songs, Japanese Summer: Double Suicide, and best of all Three Resurrected Drunkards. The last is a bizarre masterpiece mixing a boy band up with the Vietnam war and Japanese discrimination against Koreans. About 40 minutes in, Oshima provides the most anxiety-provoking reel change in cinema. All Region 2.

Now for some books and journals: 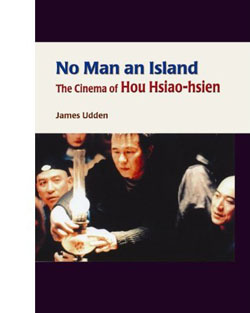 [12]James Udden, one of my last dissertators before I retired, has written the first book-length study of Hou Hsiao-hsien in English. No Man an Island: The Cinema of Hou Hsiao-hsien [13] puts Hou firmly in the context of Taiwanese film history and culture. It offers some provocative suggestions, particularly in arguing that it’s misleading to consider Hou an essentially Chinese director. Jim, who lived in Taiwan and speaks Mandarin, spent many years watching Chinese films from all eras, and he balances this breadth with close study of each Hou film. From Hong Kong University Press.

Eva Laass has just published a wide-ranging study of current narrative strategies in Broken Taboos, Subjective Truths: Forms and Functions of Unreliable Narration in Contemporary American Cinema [14]. She examines Forrest Gump, Thank You for Smoking, Natural Born Killers, Fight Club, and other works in the light of several questions. What different forms of narrative unreliability can be distinguished? Why have unreliably narrated films become so popular in recent years? Which needs do they meet in American culture? Although available from Amazon.de, the book is in English.

I met Steven Jacobs, a brilliant young art historian with wide-ranging expertise, at the Bruges Zomerfilmcollege [15] some years ago. This year [16] he gave me a copy of his 2007 book, The Wrong House: The Architecture of Alfred Hitchcock. [17] Drawing on research in production documents, it’s a careful and imaginative analysis of the master’s use of interior spaces, including discussion of his “staircase complex.” Steven has even reconstructed floor plans for some movies. He is interviewed about the book, in Dutch, here [18].

For Paolo Gioli admirers, the forty-fifth Pesaro festival catalogue [19] should be welcome. A retrospective of Gioli films is accompanied by essays, an extensive interview with Giacomo Daniele Fragapane, and a detailed, annotated filmography. Everything is bilingual Italian/ English. You can download the catalogue as a pdf here [19]. I hope to post my contribution, with some extra frames, on this site in the next month or so.

One of Eisenstein’s most ambitious projects was The Glass House (1927-1930). Inspired by skyscrapers, he envisaged a movie set in a high-rise apartment building of the future, with transparent walls and ceilings. He savored the idea of juxtaposing action in different layers (akin to the sequence in M. Giffard’s apartment in Tati’s Play Time). Some of the results can be seen surmounting this entry: a cat curled above a moving street, intertwined lovers seen through a bathroom floor. Another sketch shows a dying woman in the foreground and elevators carrying oblivious people past her.

The bold project is documented in a lovely French volume [20] edited by Alexandre Laumonier and translated by Valérie Pozner and Michail Maiatsky. Glass House contains diary extracts, working notes, and sketches, all thoroughly annotated by François Albera. In a synoptic essay, Albera discusses the role of architecture in Eisenstein’s thinking. 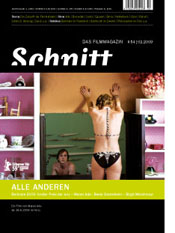 [21]Everyone seems to be talking about the roles of film festivals these days, and a current roundup of opinion can be found in the Cologne-based magazine [22]Schnitt [22]. The magazine is published in German, but for the festival symposium in issue 54 [23], the editors provide English versions of essays by Marco Müller (Venice), Cameron Bailey (Toronto), and many other festmachers. Some radical ideas floating around here, including the suggestion by Lars Henrik Gass (Oberhausen) that subsidies for national film industries, and their festivals, may have to end. (His essay is available in English here [24].)

In the wake of my homage to the Geneva Theatre/ Smith Opera House [25], Karen Colizzi Noonan kindly sent me some issues of Marquee, the journal of the Theatre Historical Society of America. Marquee is going strong after forty years, and it remains a lavish production, with big stills and in-depth research. The Society, which is currently updating the standard source book Great American Movie Theaters, holds an annual meeting that includes theatre tours. If you’re at all interested in American film history, you should visit the Society’s website [26].

There were other items on the two piles, but I have to go. My eyes and ears have some work to do. I’ll leave you with the most unexpected development [27], film-book-wise, I have encountered upon my return.