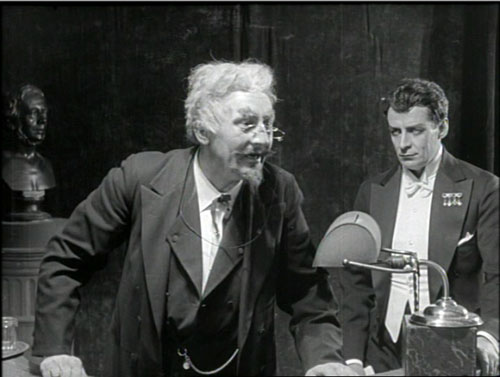 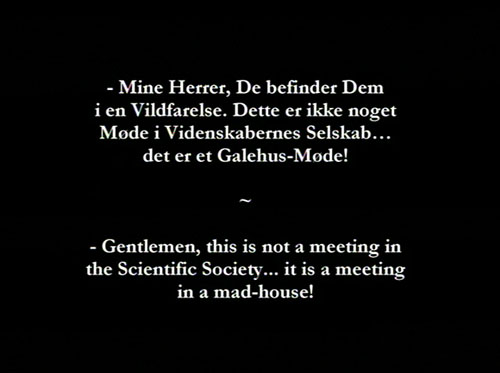 What gives movies the power to arouse emotions in audiences? How is it that films can convey abstract meanings, or trigger visceral responses? How is it that viewers can follow even fairly complex stories on the screen?

General questions like this fall into the domain of film theory. It’s an area of inquiry that divides people. Some filmmakers consider it beside the point, or simply an intellectual game, or a destructive urge to dissect what is best left mysterious. Many readers consider it academic bluffing, another proof of Shaw’s aphorism that all professions are conspiracies against the laity.

These complaints aren’t quite fair. Early film theorists like Hugo Münsterberg, Rudolf Arnheim, André Bazin, and Lev Kuleshov wrote clearly and often gracefully. Even Sergei Eisenstein, probably the most obscure of the major pre-1960 theorists, can be read with comparative ease. Moreover, generations of filmmakers have been influenced by these theorists; indeed, some of these writers, like Kuleshov and Eisenstein, were filmmakers themselves.

But those day are gone, someone may say. Does contemporary film theory, bred in the hothouse of universities and fertilized by High Theory in the humanities, have any relevance to filmmakers and ordinary viewers? I think that at least one theoretical trend does, if readers are willing to follow an argument pitched beyond comments on this or that movie.

That is, film theory isn’t film criticism. Its major aim is more general and systematic. A theoretical book or essay tries to answer a question about the nature, functions, and uses of cinema—perhaps not all cinema, but at least a large stretch of it, say documentary or mainstream fiction or animation or a national film output. Particular films come into the argument as examples or bodies of evidence for more general points.

In about three weeks, about fifty people will gather at the University of Copenhagen to do some film theory together. It’s the annual meeting [3] of the Society for Cognitive Studies of the Moving Image [4]. I talked about the group last year (here [5]and here [6]) in the runup to our Madison event.

The sort of theorizing we’ll do, for all its variety, is in my view the most exciting and promising on the horizon just now. It’s also understandable by anyone interested in puzzles of cinematic expression, and it has powerful implications for creative media practice.

We’ll also be in Copenhagen for Midsummer Night, which is always pleasant. Go here [7] for the lovely song that thousands of Danes will try to sing, despite terminal drunkenness. No real witches burned [8], however.

But back to topic: Puzzles of cinematic expression, I said. What puzzles? Well, films are understood. Remarkably often, they achieve effects that their creators aimed for. Michael Moore gets his message across; Judd Apatow makes us laugh; a Hitchcock thriller keeps us in suspense. What enables movies to reliably achieve such regularity of response?

It’s not enough to say: Moore hammers home his points, Apatow creates funny situations, Hitchcock puts the woman in danger. Any useful explanation subsumes a single case to a more general law or tendency. So a worthwhile explanation for these cinematic experiences would appeal to more basic features of artworks, cultural activities, or our minds. We can pick up on Moore’s message because we know how to make inferences within certain contexts. We can laugh at a joke because we understand the tacit rules of humor. We recognize a suspenseful situation because… well, there are several suggestions [9].

This sort of question is largely overlooked by theorists of Cultural Studies, another area of contemporary media studies. They typically emphasize difference and divergence, highlighting the varying, even conflicting ways that audiences or critics interpret a film.

Studying how viewers appropriate a film differently is an important enterprise, but so is studying convergence. Arguably, studying convergence has priority, since the splits and variations often emerge against a background of common reactions. A libertarian can interpret Die Hard as a paean to individual initiative, while a neo-Marxist can interpret it as a skirmish in the class war, but both agree that John and Holly love each other, that her coworker is a weasel, and that in the end John McClane’s defeat of Hans Gruber counts as worthwhile. Both viewers may feel a surge of satisfaction when McClane, told by a terrorist he should have shot sooner, blasts the man and adds, “Thanks for the advice.”  What enables two ideologically opposed viewers to agree on so much?

Films aren’t just understood in common; they arouse remarkably similar emotions across cultures. This is a truism, but it’s been too often sidestepped by post-1960 film theory. Who, watching The World of Apu, doesn’t feel sympathy and pity for the hero when he learns of the sudden death of his beloved wife? Perhaps we even register a measure of his despair in the face of this brutal turn of events.

We can follow a suite of emotions flitting across Apu’s face. I doubt that words are adequate to capture them. 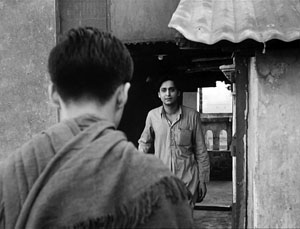 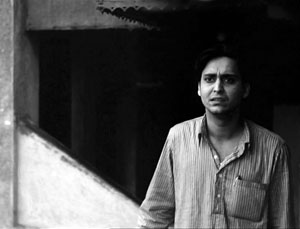 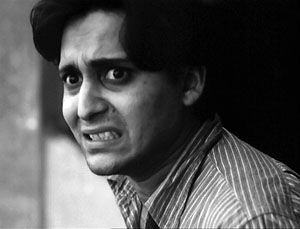 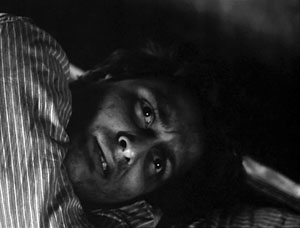 Are these facial expressions signs that we read, like the instructions printed on a prescription bottle? Surely something deeper is involved in responding to them—for want of a better word, fellow-feeling. Indians’ marriage customs and attitudes toward death may be quite different from those of viewers in other countries, but that fact doesn’t suppress a burst of spontaneous sympathy toward the film’s hero. We are different, but we also share a lot.

The puzzle of convergence was put on the agenda quite explicitly by theorists of semiotics. Back in the 1960s, they argued that film consisted of more or less arbitrary signs and codes. Christian Metz [14], the most prominent semiotician, was partly concerned with how codes are “read” in concert by many viewers. Today, I suppose, most proponents of Cultural Studies subscribe to some version of the codes idea, but now the concept is used to emphasize incompatibilities. So many codes are in play, each one inflected by aspects of identity (gender, race, class, ethnicity, etc.), that commonality of response is rare or not worth examining.

A complete theoretical account, if we ever have one, would presumably have to reckon with both differences and regularities. The dynamic of convergence and divergence is a central part of one arena of film studies that has, for better or worse, been called cognitivism.

The cognitive approach to media remains a pretty broad one, and the Society for Cognitive Studies of the Moving Image hosts a plurality of approaches at its annual meetings. SCSMI has become home to media aesthetes, empirical researchers, and philosophers in the analytic tradition who are interested in interrogating the concepts used by the other two groups. Last year’s gathering, at our campus here in Madison, created a lively dialogue among these interests.

For instance, some of us Film Studies geeks wonder why people so consistently ignore mismatched cuts. Dan Levin [17]’s ingenious experiments on “change blindness” provide a hilarious rejoinder. In one study conducted with Dan Simons [18], a stooge asks directions of an innocent passerby. As they’re talking, a pair of bravos carry a plank between them, and another confederate is substituted for the first one. 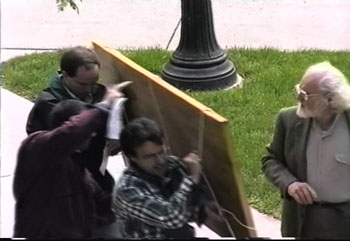 You guessed it. Most subjects don’t notice that the person they’re talking to has changed into somebody else! So how can we worry about mismatched details in cuts? Actually, Dan’s research isn’t just deflationary. It helps spell out particular conditions under which change blindness can occur.

Another stimulating talk was offered by Jason Mittell [20]. He asked how long-running prime-time TV serials can solve the problem of memory. In this week’s episode what strategies are available to recall the most relevant action of earlier episodes? How can previous action be presented without boring faithful fans? Jason, who has a new book on American TV and culture [21] out this spring, went beyond describing the strategies. He suggested how they can become a new source of formal innovation, as in the Death of the Week in Six Feet Under.

Sermin Ildirar [22] of Istanbul University presented the results of a study on adults living in a village in South Turkey. These viewers were older, ca. 50-75, and—here’s the interesting part—had never seen films or TV shows. To what extent would they understand “film grammar,” the conventions of continuity editing and point-of-view, that people with greater media experience grasp intuitively? To facilitate comprehension, the researchers made film clips featuring familiar surroundings.

The results were intriguingly mixed. Some techniques, such as shots that overlapped space, were understood as presenting coherent locales. But most viewers didn’t grasp shot/ reverse-shot combinations as a social exchange. They simply saw the person in each shot as an isolated figure.

The discussion, as you may expect, was lively, concerning the extent to which a story situation had been present, the need to cue a conversation, and the like. I found it a sharp, provocative piece of research. Stephan Schwan [23], who worked with Sermin and Markus Huff, has become a central figure studying how the basic conventions of cutting and framing might be built up on the basis of real-world knowledge, and both he and Sermin are back at SCSMI this year. 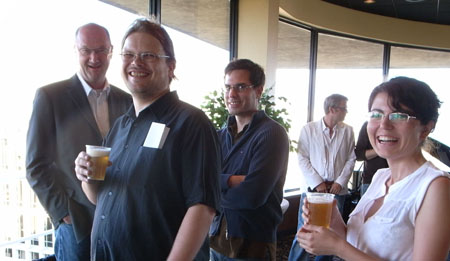 There were plenty of other stimulating papers: Tim Smith’s usual enlightening work on points of attention within the frame [25], Johannes Riis on agency and characterization, Paisley Livingston on what can count as fictional in a film, Patrick Keating on implications for emotion of alternative theories of screenplay structure, Margarethe Bruun Vaage on fiction and empathy, and on and on.

One of the best things about this gathering was that the ideas were sharply defined and presented in vivid, concrete prose. I can’t imagine that ordinary film fans wouldn’t have found something to enjoy, and of course many of these matters lie at the heart of what filmmakers are trying to achieve. Indeed, some filmmakers regularly give papers at our conventions. The much-sought link between theory and practice is being made, again and again, in the arena of the SCSMI.

Last year I came to believe that this research program was hitting its stride. My hunch is confirmed by this year’s gathering in Copenhagen. The department of media studies there has long been a leader in this realm. You can download a Word version of the schedule here [26].

Lest you think that the conference participants don’t talk much about particular movies, I should add that there’s one film we’ll definitely be talking about this time around. Our Copenhagen hosts have arranged for a screening of von Trier’s Antichrist [27].

Next time: Going deeper into cognitivism, and three recent explorations. 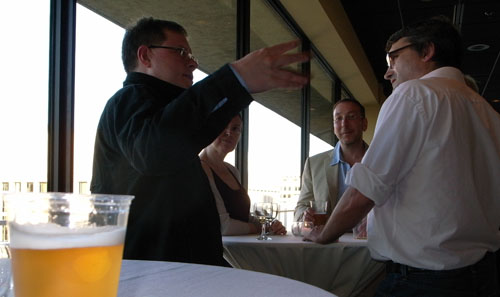 Kristin and I have talked about pictorial universals elsewhere on this site. See her blog entry [29] on eyeline matching in ancient Egyptian art, and my comments on “representational relativism” here [30].

Images at the top of this entry are taken from the Danish film Himmelskibet (The Space Ship, aka A Trip to Mars, 1918).