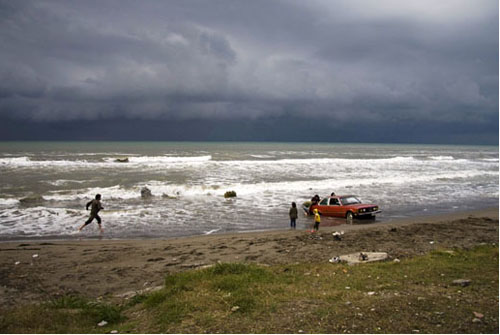 I haven’t been slack, honest; I’ve caught several items at the archive and during the first weekend of the Film Festival. I even saw Watchmen, accompanied by rump-shaking Shaw Active Sound. But today let me get caught up with some films I saw in Filmart [2] last week.

I was unimpressed by the picture that launched Filmart, Derek Yee’s Shinjuku Incident. Billed as Jackie Chan’s emergence as a real actor, it features him as a confused illegal immigrant thrown into the Tokyo underworld. His character never made sense to me, and the direction was formulaic: basically pan around a group of actors until somebody says something. Daniel Wu gets to play another maniac.

Less heralded Filmart screenings were much more satisfying. The best, and my favorite film I’ve seen so far this year, was About Elly. It is directed by Asghar Farhadi, and it won the Silver Bear at Berlin. I can’t say much about it without giving a lot away; like many Iranian films, it relies heavily on suspense. That suspense is at once situational (what has happened to this character?) and psychological (what are characters withholding from each other?). Starting somewhat in the key of Eric Rohmer, it moves toward something more anguished, even a little sinister in a Patricia Highsmith vein.

Gripping as sheer storytelling, the plot smoothly raises some unusual moral questions. It touches on masculine honor, on the way a thoughtless laugh can wound someone’s feelings, on the extent to which we try to take charge of others’ fates. I can’t recall another film that so deeply examines the risks of telling lies to spare someone grief. But no more talk: The less you know in advance, the better. About Elly deserves worldwide distribution pronto. 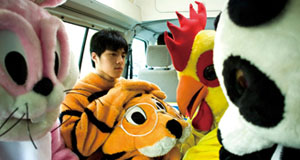 Also worth seeing was A Place of One’s Own, a Taiwanese film that uses imagery of living spaces to explore generational differences. As a young rock singer’s career fades, his pop-star girlfriend’s career takes off. Their fates are intertwined with those of a family who live near a cemetery. The father makes exquisite paper dwellings that are burned during funeral ceremonies, the mother maintains gravesites (and talks to ghosts), while the son launches himself on a real-estate career with the help of a dodgy rich kid. Director Ian Lou (God Man Dog) enhances this network narrative with some clever flashback constructions as well. 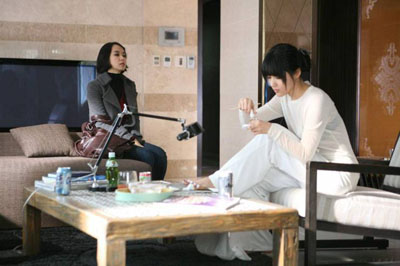 Two films I saw in the market display different ways of using past incidents to explain a story’s present-time crises.

My Dear Enemy, by Lee Yoon-ki, exhibits a striking concentration and dramatic focus. Hee-soo’s boyfriend Cho borrowed $3500 from her before they broke up. Today she has tracked him down and demands it back. She drives him around as he visits various associates—his biker cousin, a high-class prostitute, a rich older woman who seems to be using his sexual services, an unmarried mother—scrounging for money to pay Hee-soo back. Across a day of setbacks both comic and frustrating, we come to learn of their romance and their deeper personalities.

At first Cho seems the classic annoying charming rogue, chattering about the music he likes, pausing to buy flowers and oversweet coffee, flattering every woman he meets, and on the verge of ducking Hee-soo’s demands. Every time he gets out of the car, you think he might bolt. These first impressions, however, get nuanced as we see how he moves easily and even gracefully through his milieu. He seems a loser, but we learn that he is resilient and resourceful. Meanwhile Hee-soo’s righteous determination to get her money back comes to seem something of a desperate effort to close the book on painful episodes from her past.

Lee Yon-ki, who earlier gave us This Charming Girl, is very good at structuring scenes so that we understand every character’s changing attitudes. To get the money, Cho lets his target think that he’s helping out Hee-soo, and at one point he implies that she’s pregnant. As Hee-soo realizes that he’s making her play a part in his drama of self-aggrandizement, she is hurt and ashamed. And Cho’s happy-go-lucky facility in his milieu makes her feel more of an outsider. One scene, in which Cho’s hooker friend calmly insults Hee-soo, is a subtle study in casual humiliation.

Yet Hee-soo’s tenacity wins Cho’s respect. At the same time, while as the day passes into night, Cho emerges as a figure with his own code of honor (he eventually provides a meticulous account of what he’s cost her in the day’s expenses) and even a dream of success that might, the last shot suggests, be fulfilled. Bits of business around coffee, cellphones, flowers, and a broken windshield wiper chart the fluctuations in their relationship concisely. My Dear Enemy is a model of how to make a tight, intimate movie focused on simple incidents that carry almost Hitchcockian tension: Will Cho pay Hee-soo off? Will he slip away and abandon her again? What will we learn next about each one’s past? Like About Elly, this is a character study with an engrossing plot.

More diffuse, I thought, was Ann Hui’s unfortunately titled Night and Fog. It’s a companion piece to The Way We Are, her 2008 study of life in the Tin Shui Wai area of Hong Kong. I offered an admiring account here [5].

This is the “darker story” Ann promised us at last year’s festival, and it’s based on an actual case. Lee Sum has married a Mainland woman, Ling, and has fathered two daughters with her. He’s on social security and Ling works as a waitress. But Lee is considerably older, and he suspects her of flirting with other men. He becomes insanely jealous, beating her and throwing her and their daughters out. Ling finds happiness in a woman’s shelter, but social services fail her and Lee brutally murders her and the children.

No harm in telling you the ending because the murder is the first thing we see. The film consists of a series of flashbacks, some nested within others, that trace what led up to Lee’s horrendous crime.The plot is presented in the framework of a police investigation, with witnesses to Ling’s life answering questions that pass into scenes from the past. The early flashbacks are quite linear, treating the buildup to Ling’s stay in the shelter and a moment in which she sings a song about a mushroom maiden. Then we plunge further into the past, showing her leaving her provincial home as an adolescent on the way to work in the city. Soon we’re given early moments in Lee’s courtship of her.

One effect of introducing the early stages of their marriage late is to mitigate the harsh portrayal of Lee that has dominated the first half of the film. He seems genuinely in love with Ling, and he rebuilds her parents’ home. Already, however, we glimpse his drunkenness, his sadism, and his aggressive sexual appetites.

On the whole, I’m not sure that this complicated flashback structure serves the film well. At times it is strikingly symmetrical, as when a scene of Lee returning from Shenzhen on the train is followed by a distant flashback of the marriage, and this is closed off by a shot of Ling and her daughters traveling on the same train. At other points, though, the relation between the witness’s testimony and the flashback episodes is arbitrary, with the flashbacks showing scenes unrelated to that witness’s knowledge of the family drama.

It seems to me as well that the power of the events leading up to Lee’s murder of his family is vitiated by the protracted Mainland visits, widening the film’s field of view to life in Sichuan and Ling’s family. Where My Dear Enemy lets its backstory emerge in piecemeal fashion through hinting dialogue, dramatizing every relevant moment in Ling’s past seems to lose some focus.

Likewise, there’s a certain fuzziness about the film’s main thrust. Is it a character study, trying to explain why Lee is violently jealous and why Ling stays with him? The only clear answer I could determine was her sense of indebtedness for his help to her parents. Is Night and Fog then best taken as a critique of the Hong Kong bureaucracy? The social workers are portrayed as indifferent or unable to understand domestic violence. But in that case we need to see more of the mechanisms of decision-making than we do, and then many of the intimate relations of the couple would be extraneous. The battered women’s shelter, while not unblemished, becomes the opposite pole to Ling’s dangerous household, and Huipresents it as a safe space where women can express their feelings spontaneously. But again, this angle on the material seems vitiated by bringing in a public protest against real-estate development of the harbor area—an important issue, but in the context a bit distracting.

The film seems to me to excel in areas that Hong Kong cinema has made its own: extreme emotion and sheer physicality. The violence of Lee’s assaults on his family are terrifying, and Simon Yam’s performance is tremblingly ferocious. Smoking furiously, swigging cans of beer, Yam gives us Lee Sum as a figure on the edge of destruction. He makes even fishing seem an act of aggression. Lee’s incessantly jiggling leg is like the timer on a pressure cooker, and when he sits down with his son from a previous marriage—a sleepy-eyed young pimp—the two of them share the same foot-jiggling tic. In this shot, Hui gives us a diagram of male aggression ready to burst.

If My Dear Enemy trades on suspense, Night and Fog creates dread. One is roundabout, the other more direct; one suggests much, the other shows everything. Two ways, we might say, of making modern cinema.

More, including another Iranian masterpiece, in my next communiqué. 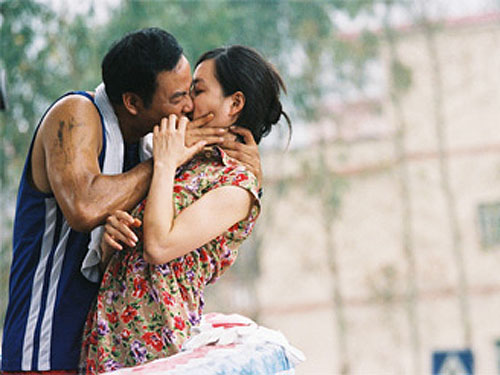