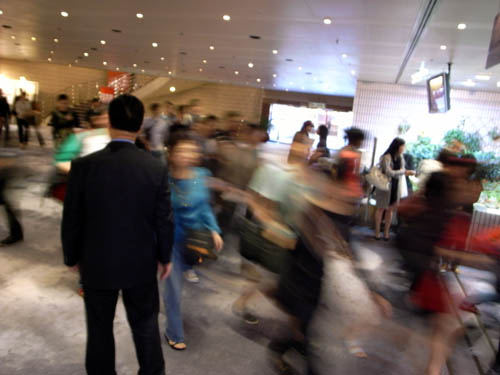 There are plenty of big attractions at this year’s festival. After seeing Om Shanti Om (wildly enjoyed by the audience), I was standing outside the theatre at the Cultural Centre and intersected with hordes of teenagers running to get seats for Candy Rain, a Taiwanese movie starring pop songstress Karena Lam. The result was the Wong Kar-wai homage above.

But many of the best films at this year’s festival don’t come on strong. They simply trust that you will pick up on their quiet virtues. One example is In the City of Sylvia, which I saw at Vancouver and wrote about here [2]. There are others too.

The way we live now 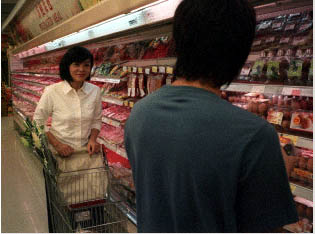 In my previous entry, I mentioned three main sorts of HK films being made these days: programmers, auteur films, and epic coproductions. I neglected a fourth category, that of the small-scale film commenting on local life and history in a heart-warming, nostalgic vein.

Every year a few of these are made, usually attracting a small public. Examples would be Herman Yau’s From the Queen to the Chief Executive (2000) and Give Them a Chance [4] (2006), Samson Chiu’s Golden Chicken (2002) and its sequel (2003), and last year’s Mr. Cinema, a gentle history of Hong Kong from the standpoint of an idealistic movie projectionist. An older example is the sweet-natured Umbrella Story (1995), which integrates CGI footage of Bruce Lee and other stars. Golden Chicken found box-office success, but mostly these projects attract a small public at home and an even smaller one abroad. They don’t, as the saying goes, travel well.

An ambitious example of the grassroots Hong Kong movie had its premiere last week. Ann Hui’s The Way We Are is remarkably bereft of ordinary plotting and dramatic conflict. A widow raises her teenage son in a high-rise apartment in Tin Shui Wa, a district in the New Territories. She works in the fruit section of a supermarket, while he waits for the results of his high school examinations. They meet an old woman living in the same building and they get somewhat involved with her personal problems, the chief one being a hostile son-in-law.

The widow’s mother takes sick. A distant relative dies. An uncle promises to pay for the son’s overseas education. The film refuses to exploit the traditional dramatic potential of any of these situations. There is no tragedy, no sudden burst of violence, no slaps or wails or shattering confrontations. This is a movie in which, by the standards of traditional dramaturgy, nothing happens.

The widow works hard, but she isn’t made saintly; she’s just a kind, devoted person, wearing a perpetually alert half-smile. The son seems at first to be wasting his summer by lounging about, but he dutifully runs errands and takes responsibility for helping his hospitalized granny. The Way We Are makes Edward Yang’s Yi Yi look melodramatic.

The bulk of the film consists of people simply passing their time—working, meeting family and friends, and above all eating. The Way We Are must have more food scenes than any other movie in history. We watch food wrapped, chopped (durians especially), cooked, and consumed. There aren’t many Hong Kong movies that don’t feature food scenes, but this movie puts eating front and center. Again, though, feeding your face doesn’t get the comic or dramatic charge it has in classics like Michael Hui’s Chicken and Duck Talk or Tsui Hark’s Chinese Feast. Eating is just another routine. 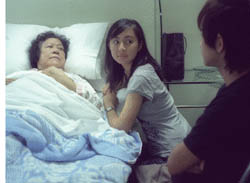 [5]Ann Hui has created perhaps Hong Kong’s closest equivalent to Ozu: a film in which daily life, unemphatically presented, is sufficient to engage our sympathies. Granted, The Way We Are lacks Ozu’s formal rigor, his habit of mirroring situations through composition and color design and auditory motifs. Shot on HD in longish, straightforward takes, Hui’s film risks seeming as mundane as its subject. Still, her impulse seems akin to his: a delicate search for human kindness in the commonplace. A title of another of Ann Hui’s films would do for this one: Ordinary Heroes.

The project began as a much grimmer story based on a brutal murder in the neighborhood. But Ann couldn’t bring herself to shoot the script. Investigating Tin Shui Wa, she realized that it was “similar to the squatter huts of the 1950s or the resettlement areas of the 1970s. It is very Hong Kong.” Like the other grassroots films, it recalls earlier periods, using a few judicious montages of stills of people at work and play. It is nonetheless a film about today, showing local life with quiet optimism and good humor. Ann still hopes to shoot the original script as a dark companion piece, creating “a complete statement” on contemporary ways of living. (1) 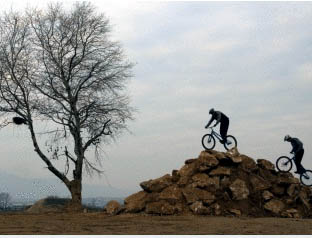 The Pope’s Toilet (Enrique Fernández, César Charlone). The Pope is visiting Uruguay, and a smuggler decides to build a pay toilet for the hordes who will be swarming into his little town. The intrinsic comedy of the situation is nuanced by the serious portrayal of Beto’s failings, his wife’s patience with his intransigence, and his daughter’s hope of escaping her cramped life. How can you not like a film with a man frantically cycling home, a commode lashed to his bike? A touching surprise that would brighten up any festival’s roster.

Milky Way. I admire Benedek Fliegauf’s Dealer (2004), a nightmarish chronicle of a drug dealer’s hectic final hours, and especially the imaginative network narrative The Forest (2003). This last is a must-see for its careful construction and its moment-by-moment eeriness [7].

So I was eager to catch Fliegauf’s latest, Milky Way. It consists of ten shots, each one a distant tableau showing a landscape punctuated by human presence. The action develops through minuscule changes, often in a comic direction. Fliegauf compares his compositional strategy to the online game Samorost [8]. To me it recalled Structural narratives like Jim Benning’s 11 x 14 and perhaps owes something to Kiarostami’s 5. On the whole it seemed to me not as original as his earlier works. Still, without words, presenting gorgeous imagery and evocative noises, the film tries for nothing more than a series of calmly unfolding visual conundrums. As Fliegauf remarks, “I think that this film quiets the mind.” (2) That’s something worthwhile in these days of all-out cinematic assaults on your brainstem. Yes, I am thinking of Transformers.

More to come this week–many more films, plus at least one interview with a filmmaker. 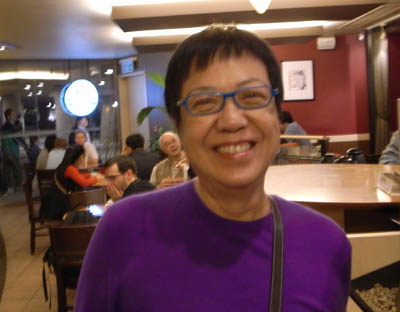 Ann Hui before the premiere of The Way We Are.

PS 6 April 2008: Thanks to Mike Walsh for a correction on an earlier version of this entry.