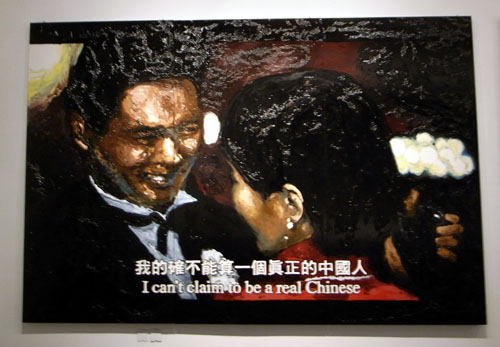 For those of you who have had problems connecting with this site: Sorry! Our server was down for a couple of days. Ironically, I was one of the last to climb on. Hence the slight delay in this posting from the Hong Kong International Film Festival.

Local cinema is still in the doldrums. As in most countries, Hollywood rules the box office. Production has dropped to about 50 releases last year, and the quality of what I’ve seen over the last week isn’t on the whole strong.

I’m told by a film professional who follows things closely that critics feel that 12-15 local films from 2007 are worth seeing and about 5 are actually good. Those five are Ann Hui’s The Postmodern Life of My Aunt, Derek Yee’s Protégé, Johnnie To’s Mad Detective, Yau Na-hoi’s Eye in the Sky, and Peter Chan’s The Warlords. It’s significant, my friend indicates, that almost never before has the same clutch of films been nominated for best picture, best screenplay, and best director at the Hong Kong Film Awards [3]. (The awards will be given on 13 April.) “The falling industry has reached a plateau,” she remarks.

My sense is that Hong Kong cinema is sustained, however minimally, on three levels. As usual, there are the program pictures, chiefly urban action films and romantic comedies and dramas. These come and go, using local singers and TV stars, and allow theatres to keep their doors open. More creative are the films from local auteurs, principally Johnnie To Kei-fung. (Should I count Wong Kar-wai as a local filmmaker any more?) To’s Milkyway company turns out several worthy items per year, most directed by To. As I indicate in an earlier post [4], The Sparrow is their upcoming release; it’s also the best Hong Kong movie I’ve seen so far on my trip.

The Warlords is the prime instance from last year, but it was preceded by The Myth (2005) and A Battle of Wits (2006). The genre was made popular by Mainland movies like Zhang Yimou’s overdecorated epics, and it has already furnished us two spring releases, An Empress and the Warriors (yes, you read that right) and The Three Kingdoms: Resurrection of the Dragon. Both are straightforward tales of military struggle, centering on loyalty and honor, with relatively little of the palace intrigue that usually furnishes plot motivation. 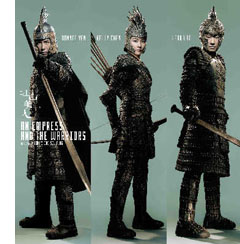 [5]An Empress, starring Donnie Yen, Leon Lai, and Kelly Chen, is pretty thin going, with overhasty fight scenes and Bumpicam coverage. The only engaging element, apart from the porcupine armor on display in the ads, is the fact that Leon plays a warrior who has retired from the world. He has for obscure reasons turned his patch of the forest into a launching pad for a hot-air balloon. Still, when ninja-like invaders assault his rickety scaffolding, we get a fairly effective action scene that carries a little of the impact of director Ching Siu-tung’s best movies.

The Three Kingdoms, a Korean-China coproduction directed by Hong Kong’s Daniel Lee, is a somewhat more impressive item. The plot traces the rise of a general (Andy Lau), aided by his mentor (Sammo Hung), and their confrontation with a rival general, whose cause is taken over by his daughter (Maggie Q). There is little characterization; everything hinges on honor, retribution, and service to one’s superior. A tranquil interlude with Andy’s love interest, a shadow puppeteer, is quickly forgotten in the rush to combat. The musical score channels Morricone, and as in Empress, it employs thunderous drumbeats, chanting male choruses, and a keening soprano. Inevitably, we also sense the influence of Wong Kar-wai in the meditative voice-over and the fight scenes (choreographed by Sammo) that recall Ashes of Time in their slurring and spasmodic rhythms.

Are such films really desired by Asian audiences, let alone Western ones? The jury is still out. Thanks to shooting in China and the diffusion of CGI technology, such genre pieces can be made for much less than Hollywood would spend. Three Kingdoms came in at less than US$20 million, which is twice the budget purportedly spent on Empress. But international sales of the genre are spotty, and audience uptake isn’t overwhelming. Somebody will have to tweak the formula creatively. Will it be John Woo, with Red Cliff? Odds are against it, but I’d like to be surprised.

Incorrigibly optimistic, I’m still looking forward to Ann Hui’s newest film, The Way We Are, premiering tonight, and Coffee or Tea, the collaboration of veteran director Shu Kei and his student Mandrew Kwan Man-hin. That’s the closing film of the festival. 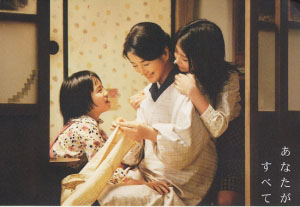 Other festival highlights for me:

Please Vote for Me! A primary school in Wuhan is introduced to democracy when the teacher decides that the monitor will be elected by the class. There ensues a struggle all too reminiscent of U.S. political campaigns. We have sound bites, applause lines, political operatives (here, overzealous parents), scurrilous charges, personal attacks, and outright bribery. The collision of human nature and democratic ideals make this a charming and thoughtful movie. I can’t imagine anyone not enjoying it, if only for its reminder of how humiliation feels when you’re nine years old. 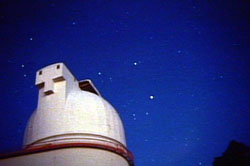 [7]Observando al cielo. Jeanne Liotta’s ode to astronomical phenomena, at once scientific demonstration and lyrical tribute to the swiveling of the heavens. Visit her website here [8].

Mauerpark. From the Austrian collective Stadtmusik, Tati-goes-Betacam. A long shot of a snow-covered park is at first puzzling, then amusing, then engrossing. 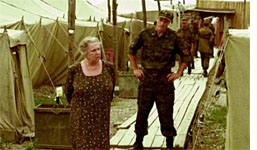 [9]Alexandra. I nearly always like Sokurov. Yes, the films can be a little overbearing, but they have a certain weirdness that keeps them from pretentiousness. Here he gives us another story of family love. An old lady visits her grandson, who’s soldiering in the Caucasus. She rides in a tank, watches men clean their weapons, and putters doggedly about the bivouac. No big emotional climaxes, unless you count her encounters with other old ladies, who have set up a market selling shoes and cigarettes, and the moment when her soldier tenderly braids her hair.

The weirdness comes in the color values–sometimes blinding orange, sometimes bilious green reminiscent of Sovcolor—and in a murmuring soundtrack that blends machine whirs and conversation with barely discernible swoops of orchestral and vocal music. (Since Galina Vishnevskaya plays the old lady, are these fragments from her performances?) Nobody makes soundtracks quite like Sokurov; even an unadorned shot can take on urgency through the drifting whispers our ears struggle to make out.

Elegy of Life. Rostropovich. Vishnevskaya. Also a pleasure to listen to, but much more straightforward. A documentary tribute to the great cellist/ conductor and the singer. Since I’m interested in Russian music and cultural politics, this was an unadorned pleasure. To hear Rostropovich compare Prokofiev the classicist with Shostakovich the Mahlerian was especially worthwhile.

Kabei—Our Mother. Yamada Yoji received a lifetime tribute at the Asian Film Awards. Having directed over seventy movies, including the long-running Tora-san series, he’s usually discussed in terms of sheer productivity. But his calm, grave period films Twilight Samurai (2002), Hidden Blade (2004), and Love and Honor (2006) have reminded people that he’s a fine director too. A man of restraint, he never shoots handheld, he seldom moves the camera, and he uses close-ups as high points, not default values. His sobriety makes the 1.85 ratio look as cleanly fitted to the human body as the 1.33 one is. “The last classical director,” Mike Walsh called Yamada after the screening, and it’s hard to disagree.

Kabei was for me the high point of the festival so far. It’s 1940, and a Tokyo intellectual is arrested for “thought crimes.” As he endures prison, his wife and two daughters struggle to make ends meet, with the help of Yamazaki, a loyal student. An epilogue reminds us of the now-elderly mother’s devotion to her husband.

That’s about it, but the poise of the performances and the simplicity of the presentation make this like a film from the era it portrays. I wish I had a DVD to illustrate the craftsmanship that Yamada brings to the very first shot, which unhurriedly introduces the family while the mother simply hangs out wash on the line. I wish I could show you how the moment that a badminton birdie lands on a rooftop pivots from comedy to sadness. I wish I could replicate the composition that hides a weeping Yamazaki from us—a shot that actually makes the audience burst into laughter. Who else would have the film’s biggest star, Tadanobu Asano, keep his back to us for an entire scene?

But maybe it’s better I don’t give such things away. Best to say: Despite all the other movies you see, Kabei shows one way that cinema can still be.

Finally, as antidote to my somewhat depressing diagnosis of the state of HK film, two items. First, the reception for Sylvia Chang‘s Run, Papa, Run showed off her lively charm. Here Sylvia, in black, is flanked by her stars, Yuhan Liu, Rene Liu, Lewis Koo, and Nora Miao, who played in Bruce Lee pictures.

Second, in the entertaining exhibit Made in Hong Kong at the art museum, you will find the work of Chow Chun-fai, whose output includes large, glossy enamel images taken from movies, complete with letterboxing and subtitles (typically about Chinese/ Hong Kong identity). The blocky figures seem both chunkily monumental and somewhat decaying. One of Chow’s huge pictures, derived from Love in a Fallen City, surmounts this blog entry. Below is another, based on King Hu’s Dragon Inn.

More to come in a few days, including, I hope, thoughts on Maya Deren and an interview about sound design in Milkyway movies. 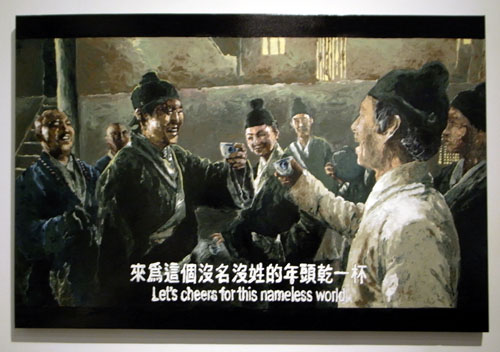