“For us, Hong Kong will always be the place.”

Hong Kong’s Entertainment Expo, including the Hong Kong International Film Festival, the Asian Film Finance Forum, and the Hong Kong Filmart, runs for nearly a month, and it has drawn me back to the fragrant harbor. For refreshers, you can visit last year’s posts here [2]. 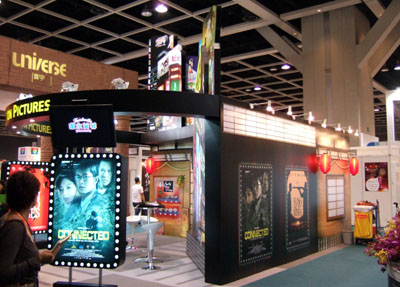 [3]
The Filmart has become Asia’s biggest spring media event, with hundreds of companies crowding into a pavilion of the Convention Centre. Here people traffic in movies and TV shows, buying and selling distribution rights, seeking funds for production and partners in movie ventures. I wandered through it last year [4], and you can track this year’s activities at Variety’s site here [5].

The last figures I saw indicate that the world pumps out about 4800 features each year. Coming to a market like Filmart, you get to peek below the waterline and see the iceberg that’s underneath.

There are, for instance, the bulk genre items from secondary, or tertiary, producing countries. 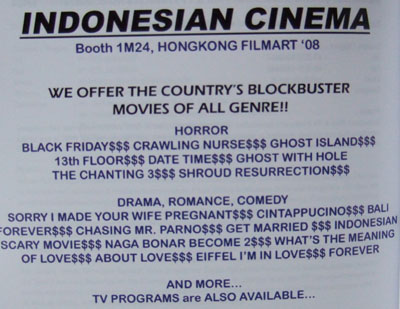 There are the films that seem somewhat derivative. 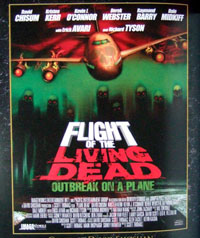 Then there’s the vehicle with the midrange star that just might make it to late-night cable.

Finally, there are the films that acknowledge themselves to be identical. These descriptions come from Imagination Worldwide’s catalogue ad.

By contrast Filmart mounted a respectful display devoted to Edward Yang, who died last summer [10]. Edward made idiosyncratic, powerful films that would, even today, be very hard to sell at a market. He was a skilled cartoonist, and the display includes some of his perky storyboards and a self-portrait. 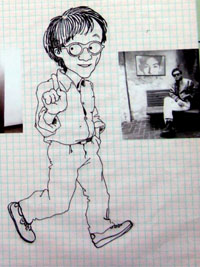 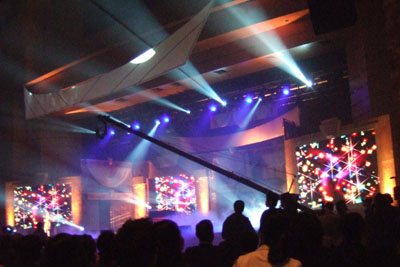 The Asian Film Awards, which I covered last year [13], started things off with a midsize bang Monday night.

The full results can be found here [14]. I was pleased that Secret Sunshine, quite a good film, won three top awards (film, director, actress). Milkyway, a favorite company of mine, garnered a couple of prizes, and The Sun Also Rises, one of my favorites from last year, did pick up the Production Design prize.

Some Big Stars were visible at both the show and the after-party. Heartthrob Tadanabu Asano arrives. 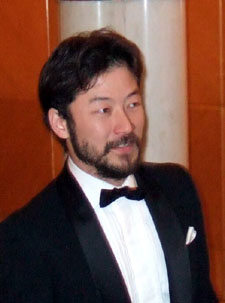 Lee Kang-sheng and Tsai Ming-liang mingle before the awards. 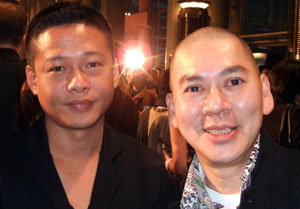 Marco Muller, Director of the Venice Film Festival, at the after-party. 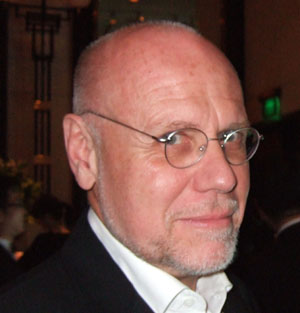 I got to talk briefly with one of my heroes, Hou Hsiao-hsien. 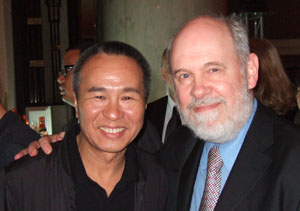 And of course Tony Leung Chiu-wai, emblem of the Entertainment Expo and winner of the Best Actor Award (Lust, Caution), was everywhere, and always looking good. 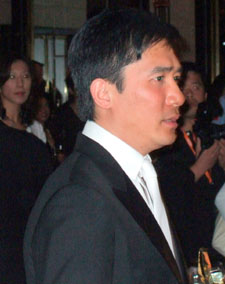 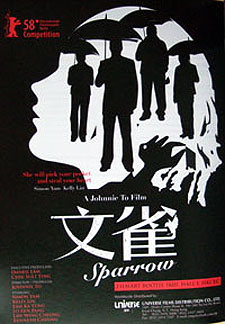 Within 36 or so hours, I saw quite a lot of movies. With friends Paisley Livingston and Mette Hjort and their kids I caught Enchanted, which pleased me with its schmaltzy cleverness. As part of the Festival, I re-watched on 35mm two movies I’d seen and commented upon last year: Jiang Wen’s The Sun Also Rises [21] and the Tsui/ Lam/ To Triangle [22]. These were shown at the shock-and-awe auditorium of a new cinema in a spanking new mall, Elements. The seats vibrate at the lowest frequencies, creating what is marketed as “4-D.”

[23]Two films struck me as excellent. Gao Qunshun’s Old Fish (2008) centers on a simple idea. Somebody is planting bombs throughout Harbin, and an aging police officer is the only person remotely qualified to dismantle them. Over a leisurely half hour, we’re introduced to Old Fish, his wife, and his colleagues. Then the first bomb is found, and the suspense kicks in. The apparently clumsy codger, who in an early scene fumbles a World War II grenade, summons up wiliness and delicacy when he has to defuse the mysterious packages.

I don’t think I’ve ever seen more tension-filled sequences of this sort. The film made me realize that in any bomb-disposal scene, when close-ups of a sweating face and a knifeblade hovering over a wire are followed by an extreme long-shot of the scene—that’s when we expect an explosion. Conventionally, the long shot announces the bang. But here, Gao gives us the long shot, and we have to wait, and wait some more. When the explosion does come, it is genuinely surprising.

Shot by shot and sound by sound, this is a very well-crafted, humane film. If anybody tells you that “foreign films” are digressive and boring, show them Old Fish.

Just as fine, but more unclassifiable, was Johnnie To Kei-fung’s The Sparrow (2008), premiered at Berlin. A gang of pickpockets led by Simon Yam is beguiled by a mysterious lady on the run (Kelly Lin), and their schemes start to fall apart. As often with To, the conception of the film is slim, but the execution is rich. There are the games and competitions, the symmetries and repetitions, the offhand motifs (here, cigarettes, cigars, and pipes), the geometrical and arithmetical plot mechanics. Johnnie To has become perhaps the world’s most unpretentiously, unapologetically formalist director.

It’s a procession of twists and set-pieces. There are the funny one-off shots, like the two grifters with symmetrically broken legs and the gang flashing the razor blades they hide in their mouths. Some sequences are unpredictable miniatures, like the scenes that show how many camera angles you can find in an elevator car, even with a fishtank squeezed in. There’s also a delirious bit with a lipstick-stained cigarette.

Other set-pieces unfold more majestically. There’s a sweeping crane shot of the gang vacuuming up wallets of passersby, and an elaborate theft of a pendant during massage therapy. The climax is an exuberant pocket-picking competition with all contestants stalking through a downpour, their umbrellas forcing them to work with only one hand.

The Sparrow is at once a loving tribute to old Hong Kong island (Simon’s hobby is black-and-white photography), an unpredictable genre piece, and an exercise in light-fingered filmmaking. Like Old Fish, it offers lessons to Hollywood directors, if they have the wit to learn them. 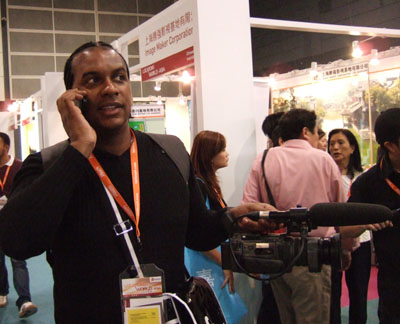 Deng said “To get rich is glorious,” and now Mao agrees. 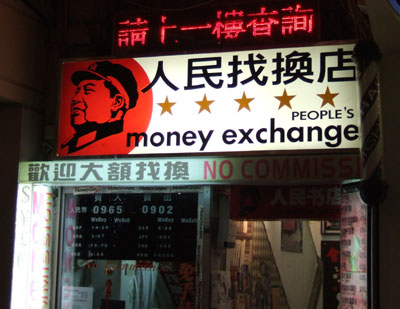 And in the spanking new, gargantuan mall known simply as Elements, an entire room is devoted to one essential Element. 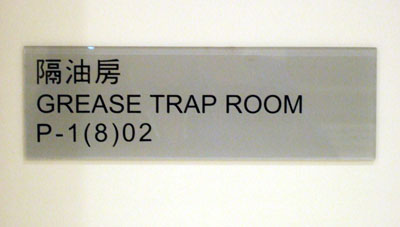 More to come, soon I hope, from The Place.