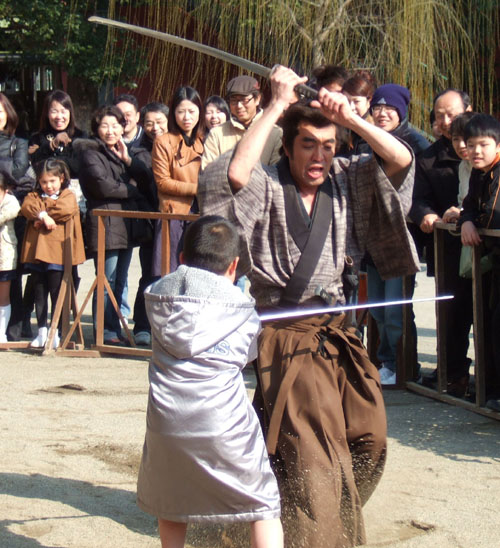 A seesaw trip in my last few days in Japan, with notes on watching some rare movies, visiting some superheroes, and watching some children cut down swaggering samurai. 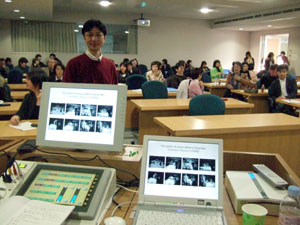 On Friday I traveled to Nagoya University with Yamanouchi Etsuko. She was my translator for a talk on Japanese film for my student, now professor, Fujiki Hideaki (above). Hideaki oversaw the translation of Film Art into Japanese and is the author of a new book on the growth of movie culture in Japan during the first decades of the century. 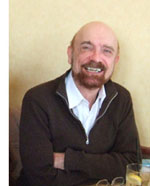 The talk seemed to go well, though my customary rapid-fire yammer sometimes left the fluent Etsuko breathless. Hideaki’s students and colleagues kept me on my toes with sharp questions. Then we all went out to a sumptuous dinner, where I had a chance to talk to many Nagoyans, including senior Japan expert Peter High, author of The Imperial Screen [1]. Peter is now about to retire, as you can perhaps tell from his expression.

Because I lectured on what I call the “game of vision” in Japanese films, we had fun at dinner with composing shots that mimicked the peekaboo framings. Even relaxing, film wonks never turn off the movies running in our heads. 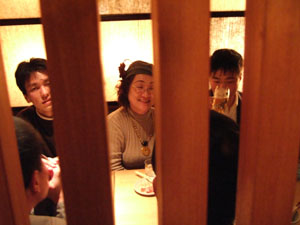 Next day I took a fairly impulsive trip to Kyoto. I tried to visit Mizoguchi’s grave, but had no luck finding it. After visiting it ten years ago, I shouldn’t have trusted my memory. Instead, I found Toei’s movie theme park, which provided me three hours of diversion.

Shochiku studios failed with its own theme park (go here [2] for my reminiscence of it), partly because it had only Ozu and Tora-san as main attractions. But Toei has a bevy of swordplay heroes and….Power Rangers. An entire wing of the facility is dedicated to superheroes, life-size and some much larger. 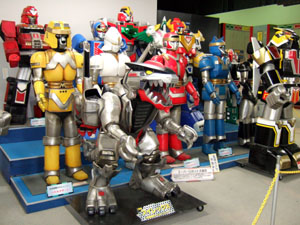 I had no idea who these hardfaced bipeds were, but they sure looked pretty, with their nice snowmobiles and vaguely obscene gestures. 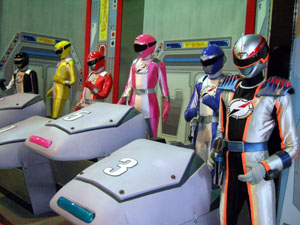 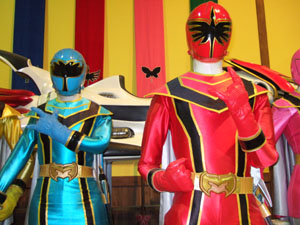 Elsewhere in the Toei park are streets evoking old Edo and Kyoto, as well as a kabuki theatre. 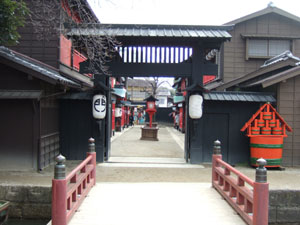 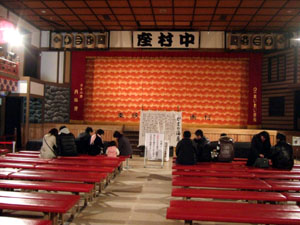 Mechanical ninja crawl around overhead, and samurai stroll the alleyways. You can watch a director pretending to shoot a TV show of swordplay in a studio set. 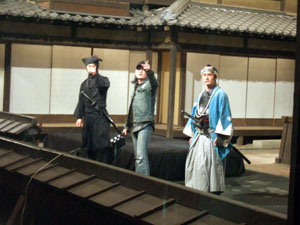 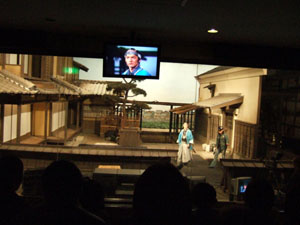 The most enjoyable moments came with a display of swordfight stunts carried out by three good-humored young samurai. They summoned from the audience a tiny boy, a somewhat older boy, and a tall little girl, and they gave them some elementary fighting skills. These skills consisted of stomping forward, crouching, and swinging the sword while letting out a blood-freezing shriek. The teachers made it look easy. 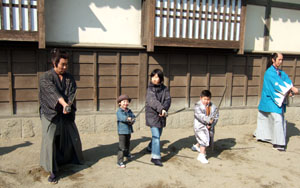 Then each kid was planted in front of the crowd and a swordsman rushed forward, with howling abandon. Miraculously, the kids’ fairly minimal defense tactics always defeated the men, who died in agony. 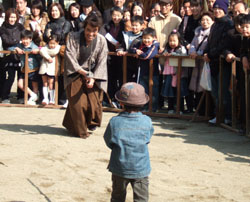 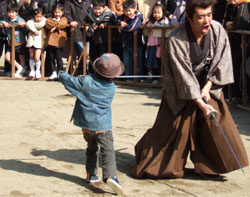 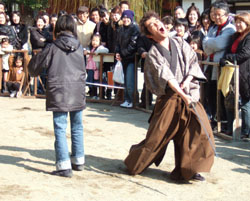 When one winner got obeisance from his enemies, he acted like the constantly scratching Mifune in Seven Samurai. 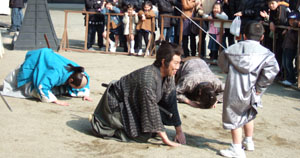 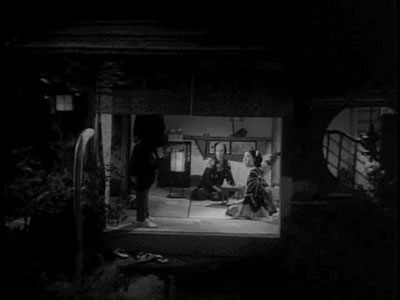 Back to Tokyo and a round of shopping, eating, and moviegoing. I was staying with Komatsu Hiroshi, a friend of almost thirty years whom I first met at a conference on Dreyer in Verona. Hiroshi is a monumental figure in silent-cinema circles, and I’m planning a later blog entry profiling him.

With Hiroshi I saw two silent Makino Masahiro films at the national Film Center. For more on this series, see an earlier entry [3]. Chronicle of 3 Generations (Gakkusei san daki, 1930) consisted of two installments of a short-comedy series produced by Makino. In the first, a modern girl throws over her boyfriend because he’s a bad baseball player. The second was reminiscent of Ozu’s Days of Youth in showing a college student trying to hide his slacker ways from his visiting father.

The second film, also part of a series, was directed by Makino. Street of Ronin (Roningai, 1929) was a bustling tale of a neighborhood of ne’er do wells. The benshi commentator must have been busy; there are over 260 intertitles in a film of about 72 minutes. I can’t tell you what happened in the plot, but the movie shows yet again that by the end of the 1920s Hollywood continuity style was in full vigor here. Makino uses a remarkable number of different setups in each scene.

At Hiroshi’s house he screened many rare items from his collection, mostly silent European, American, and Japanese films. One of the most striking Japanese titles was Magic in the Dark (Kurayami no Tejina, 1927), an experimental short with some of the stylization one finds in Kinugasa Teisuke’s Page of Madness (1926). The rain-drenched night scenes are like something out of Murnau. 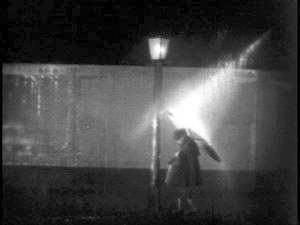 The plot is didactic and uplifting, showing how a boy tempted by money pursues a righteous path. Magic in the Dark was directed by Suzuki Shigeoshi, whose most famous film is What Made Her Do It? (1930). That famous but currently incomplete feature, along with Magic in the Dark, will be released on the Kinokinuya DVD series that Hiroshi directs. Alas, no English subtitles. (See the PS below.)

The killer item was a newly discovered Mizoguchi film, one that doesn’t appear on official filmographies! Miss Okichi (Ojo Okichi, 1935) was residing in the Shochiku vaults, and a copy, in beautiful condition, was recently screened on Japanese television. Mizo codirected it with Takashima Tatsunosuke, a director whose work I don’t know, for Dai Ichi Eiga, the production company he formed with Nagata Masaichi. Dai Ichi Eiga, which later became Daiei, financed Mizo’s masterpieces Naniwa Elegy (1936) and Sisters of Gion (1936).

A bit like The Downfall of Osen (Orizuru Osen, 1935), this film centers on a woman who’s a cat’s paw for a gang involved in shady dealings. Okichi, played by Yamada Isuzu (whose bosom I nestle against in my earlier entry [3]), is pulling scams for the sake of her lover. But she falls out with the gang and takes pity on one of the young men whom she victimizes.

I can’t comment on the film after only one viewing, and the fact that Mizoguchi is credited after Takashima suggests that he may have had little input. Still, it’s another tale of a woman who sacrifices herself for more or less unworthy men. Miss Okichi also has some typically Mizoguchian scenes that dwell on chiaroscuro melancholy. Much of the film takes place at night, and this strategy reinforces the somber atmosphere. There are some remarkably opaque long shots and one moment that includes Okichi turning toward the camera in a sort of plaintive challenge. 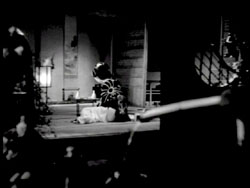 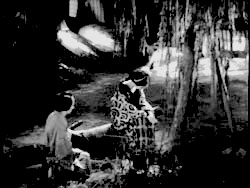 Given my admiration for Mizo [4], this capped a terrific ten days in Japan. Now on to Hong Kong, where I’ll blog at intervals on what happens at the Hong Kong Filmart market, the Asian Film Awards on Monday night, and the HK International Film Festival. I’ll be there, like Bernstein in Citizen Kane, before the beginning and after the end. 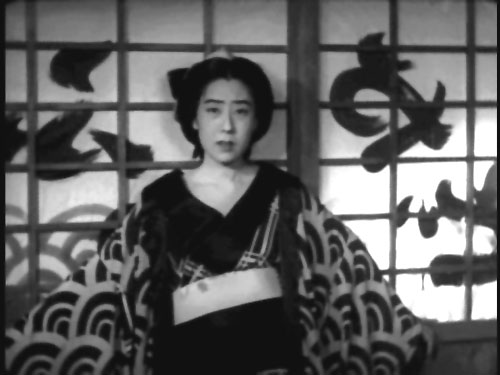 PS 24 July 2008: The Kinokuniya DVD of What Made Her Do It? has come out, and Joanne Bernardi reports that at least one version does have English subtitles…by her! Magic in the Dark is included on that disc. And despite information to the contrary, the DVD Joanne has is not Region 2 but all-region. Oddly, online listings of the DVD make no mention of these facts. Joanne does not yet know whether the subtitled all-region disc is the same as the one offered on amazon.jp [5] and the Kinokuniya site [6], but it seems likely. More information as I get it, from Joanne or others.