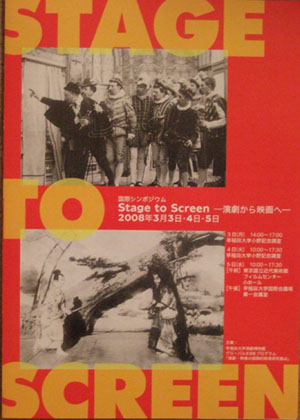 I’ve had a terrific time since I arrived late last Saturday. The only thing that could have improved it would be the discovery that there was a Japanese town named Bordwell. If it could happen to Barack [1], why not me?

Actually, I know why not. On Sunday, a trip to a temple yielded a promise that nothing good would come on any front.

Pretty dire. Yet I press on, foolishly trusting that meals will be tasty, the city will shake me up, and three fine sorts of things will grace the first phase of my stay: the symposium, the movies, and my companions. Still, I vow to avoid thinking up something bad while drinking. 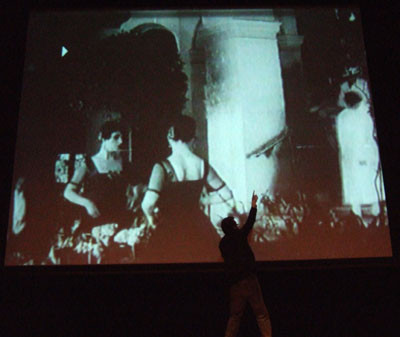 I came for a symposium at Waseda University, Stage to Screen. For three days local scholars delivered papers and comments about how cinema related to theatre.

Young researchers have done thorough work on the relation of Japanese cinema to the culture’s lively theatrical traditions. Usai Michika explored a topic that’s always fascinating–the benshi, the person who accompanied silent film with commentary and dialogue. She found a remarkable poster from the Waseda Theatre Museum collection illustrating many short films, and through diligent archive work she was able to identify most of the films. Although the poster came from 1899, the films were all pre-1896. Ogawa Sawako gave a thorough examination of how films were influenced by kodan, a sort of novelistic oral recitation. It turns out that kodan stories were at least as important as kabuki plays as sources of Japanese film, well into the 1920s. Shimura Miyoko studied later forms of rensa-geki, the mix of live performance and film that was fairly common in the silent era. She showed that there was a resurgence of it in the early 1930s, with sound cinema.

There were two keynote addresses as well, one from Yuri Tsivian and one from me. Yuri was, as usual, energetic and infectious. Our talks naturally overlapped when we touched on the 1910s, and we had some good conversation about films of that era offstage as well as on. Above you see Yuri analyzing, with his usual body English, a scene that he has made famous–a play with mirrors in Bauer’s King of Paris (1917). 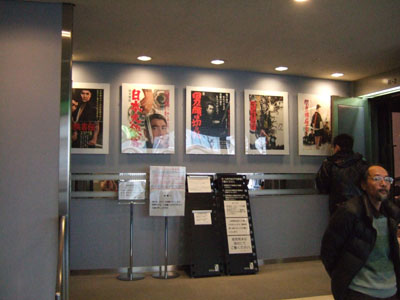 The last day of the symposium was devoted to two films that show how world film language changed between the mid-1910s and the early 1920s. Goro Masamune (1915) is a complicated tale about a swordsmith and the dramatic results of his mysterious parentage. It offered a stringent version of the sort of tableau staging we find in Europe and the US at the same period. As with those films, Goro Masamune used lateral staging and some striking depth effects, as well as long takes: I counted 58 shots and 24 intertitles across its 58 minutes.

With 356 shots and 25 intertitles, Roben-sugi exemplified a more cutting-based approach to cinematic storytelling. Scenes were broken down into many shots, often with a great variety of setups; the 180-degree system is in force; and many expressive effects were based on intercut close-ups. In the lengthy final scene, Roben, a temple bishop, discovers his long-lost mother and she prostrates herself before him. The action is played out in high-angle shots of the mother and low-angle shots of Roben. You couldn’t ask for better proof that filmmakers around the world were adopting the US continuity approach than this 1922 film. 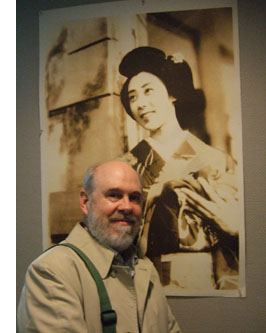 These two movies were powerful treats, and the day was embellished with a visit behind the scenes to the Film Center’s staff area, where I got Yuri to shoot me with one of my favorites, Yamada Isuzu.

Earlier in the week, with Kyoko Hirano, I’d visited the Film Center to catch an item in its massive Makino Masahiro retrospective. Makino, son of Japan’s pioneering director Makino Shozo, directed films from the late 1920s to the early 1970s. For his centenary, the Center has mounted 100 programs of his work. No, that’s not a typo. The screenings include 110 titles directed or produced by Makino—and of course several others are lost. Japanese filmmakers are nothing if not prolific.

The film that Kyoko and I saw was Japanese Gangster Story 6: Sake Cup of the White Sword (1967), starring Takakura Ken. The plot consisted of intrigues crisscrossing rival gangs during the 1920s, capped by two bloody fights at the end. Ken doesn’t say much, but the camera loves him; early in the film he seemed to me to get the biggest close-ups. In the finale, of course he sacrifices himself for his gang boss. Is any genre cinema more standardized than the 1960s-1970s yakuza yarn? After a lunch of the Asakusa version of big Hiroshima-style omelettes, Makino’s buoyant retake on the classic tropes was a filling dessert. 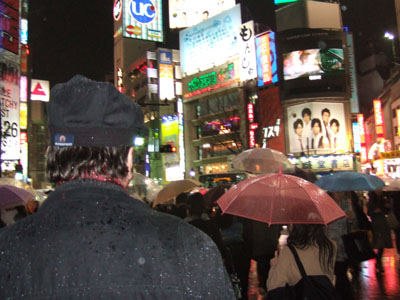 The third factor that has made this trip so pleasant has been the people. Hanging out with Yuri was great fun, and as luck would have it, Wisconsin film guy Michael Pogorzelski was visiting Tokyo at the same time. Mike is the archivist for the Academy of Motion Picture Arts and Sciences, and he restores classic films for the AMPAS collection. (It isn’t all Hollywood, either: the archive is handling Satayajit Ray and Stan Brakhage.) Darkness and rain turned our trip through Shibuya into a scene out of Blade Runner.

Then there was Komatsu Hiroshi, who invited me to the symposium. Hiroshi is one of Japan’s top film historians, a man tirelessly committed to finding Japanese films and explaining their significance. He has made his appearance on this blog before [3]. There was also Fujiwara Toshi [4], an exuberant young filmmaker I first met in Kyoto about ten years ago. Toshi has directed docs about Amos Gitai and other filmmakers, and his latest fiction film, We Can’t Go Home Again, played at the Berlin festival. 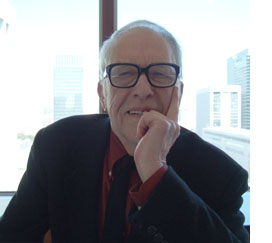 I’ve mentioned Kyoko Hirano, another former student and a best-selling author. Then there was my lunch with Donald Richie, hearty at 82 and planning more books, film screenings, and festival trips. His classic, The Inland Sea, is now being translated into Romanian. He gave me a copy of his newest, A Tractate on Japanese Aesthetics [5] and I reciprocated with a copy of Poetics of Cinema. Donald’s book is as delicate and sharp as a Basho lyric; beside it, my book looks like an andiron.

At the symposium I learned a great deal from Prof. Takemoto Mikio, director of the Tsubouchi Memorial Theatre Museum at Waseda University [6], and the vice-director Prof. Akiba Hirokazu; Prof. Takeda Kiyoshi, who studied with Christian Metz; Prof. Nagata Yasushi of Theatre Studies; and many others who contributed talks and comments.

Finally, one more person, the one who spurred me to study Japanese cinema.

Ozu Yasujiro‘s gravesite is in Kita-Kamakura, about an hour southwest of Tokyo by train. In the summer of 1988, Kristin and I were led there by Donald, and so I was due for another pilgrimage. The day was cool and sunny, perfect for a brisk walk through the grounds of Engaku-Ji Temple.

At the end of my trip was the gravestone, which famously bears a single character: Mu, or nothing. Twenty years ago, two beer cans sat reverently on the stone, but today there was an opened bottle of sake. A cigarette lighter was tucked into a hole in the surrounding stone fence. Ozu, fierce smoker and professional drinker, was in his element.

On the platform and then on the train, I let my eyes drift among the schoolkids and the teenyboppers and the salarimen and the grave elders with hygiene masks. I began to imagine how Ozu, the poet of the transience of city life and the comic poignancy of human ties, would turn us all into cinema. He might put the camera over there, squatting on the floor of the traincar. That boy with the backpack might give a sassy reply to his father. Those two stylish office ladies sharing an iPod while a middle-aged man snores beside them–surely that’s a setup for a gag. Playing with the possibilities, one gaijin felt a pang of rapture at the blending of life and art. 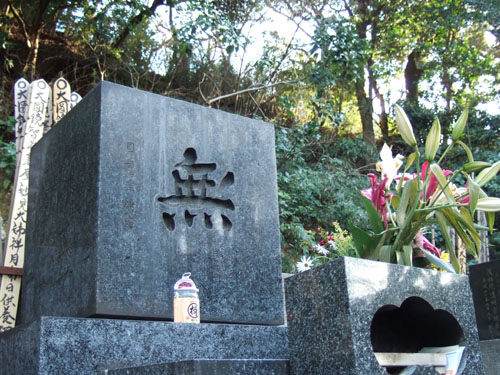