I don’t think I’ve ever seen a single theater playing all five nominees for the best-picture Oscar. It’s happening now at the six-screen Sundance Cinemas [1] here in Madison, plus they’ve got The Diving Bell and the Butterfly (nominated for director, cinematography, adapted screenplay, and editing) and Persepolis (animated-feature nominee). The latter is very impressive, and I think it would win in an ordinary year, but probably not when it’s up against Ratatouille.

[February 9. That outcome seems even more likely now. Last night Ratatouille won nine Annie Awards, prizes given out by the professional animation community. In the 35 years of those awards’ existence, only once has the top animated feature prize not gone to the film that went on to win the best animated film Oscar. Pixar’s accompanying short, Your Friend the Rat, won best short subject. It’s not eligible for an Oscar, since it was a supplement on the Ratatouille DVD and not shown theatrically.]

Films like these get widely seen, obviously. An awful lot of films, though, get nominated for Oscars that far fewer people will see. How many people fill out their office Oscar pool ballots knowing anything about the short animated and live-action films? Some you can track down online or on TV (HBO, Sundance, the IFC, and so on), but viewing them all would be difficult.

For three years now, however, Magnolia Pictures [2] has been packaging the films in those two categories into a single program that goes out to theaters and then onto DVD. Magnolia is a small independent distributor, best known perhaps for its documentaries, including Enron: Smartest Guys in the Room and Capturing the Friedmans and for its imports like Ong Bak and The World’s Fastest Indian.

This year’s program, “The 2007 Academy Award Nominated Shorts,” [3] is listed on the company’s website [4] as playing in 80 theaters, though perhaps that number will rise. Many of the runs (including the one at our Sundance Cinemas) start on February 15, and others are scheduled from then on into April.

Thanks to Sarah Simonds, manager at Sundance, I was able to get an early look at the ten films on the program.

As one might predict, the range of quality is greater in the live-action films than in the animated ones. I’m not sure why that would be predictable, but I have my suspicions. There’s not much of a theatrical market for live-action shorts, which mainly get seen at festivals and on TV. They tend to be portfolio films, made by people trying to attract attention and move up to features. Hence they more often come from beginners. Animators who don’t want to work their way up through big studios—and who stand little chance of ever directing a major animated feature—or who simply value their independence may stick with shorts.

Another factor working in favor of animation is that it’s a medium that demands the detailed planning of literally every frame. No improvisation, no casual shooting in real locales, no direct sound. All in all, I think that if I were an Academy member, I’d have more trouble making a decision in the animated-shorts category.

In the live-action category there’s no doubt that I would vote for The Tonto Woman, a UK short directed by Daniel Barber from an Elmore Leonard short story. Remarkably, Barber had mainly directed TV commercials before embarking on this, his first 35mm short, as a way of breaking into the film industry. He produced and funded it himself, with a ten-day shoot in Spain using locations and standing sets that had figured in such films as A Fistful of Dollars and The Good, the Bad and the Ugly.

The result might be described as The Piano meets There Will Be Blood. A cattle rustler (well played by Anthony Quinn’s son Francesco) encounters a rich man’s wife (Charlotte Asprey) who is living in enforced seclusion after having been kidnapped and held for eleven years by Mojave Indians (image above). The film has landscapes with the epic quality of both There Will Be Blood and No Country for Old Men, and its drama has the depth of a feature film without feeling rushed in its 35 minutes.

Leonard’s website has a press release [5] giving more details, as well as a profile of Berber [6]. The latter suggests that the director has been contacted by people within the film industry. All I can say is, fund this man immediately. I definitely want to see what he could do at feature length.

David has written quite a bit about the lively contemporary Danish cinema, including two entries on this blog, here [7] and here [8]. The country continues to be on a filmic roll in terms of Oscar nominations, with the short At Night being the one I’d vote if I were an Academy member and weren’t already voting for The Tonto Woman. It’s directed by Christian E. Christiansen and produced by Zentropa with support from the Danish Film Institute.

The subject matter sounds like the sort of thing that would ordinarily make me run the other way: three very young women with cancer bonding in the hospital ward they share. But the film avoids the touchy-feely clichés that so easily could sink such a project (except for a conventional Polaroid-photo montage of their little New Year’s party). It’s not just a sick-women’s-solidarity picture. One does come to care about these three and to understand how their illnesses make them better able to communicate with each other than with their families. It manages to pack a considerable emotional impact into forty minutes. Again, here is someone who could probably direct a fine feature film—and, given the current strength of the country’s industry, may well get the chance.

Tanghi Argentini is a charming comedy from Flemish director Guido Thys, dealing with an office worker who asks a colleague to teach him how to tango to impress a woman he has met on the internet. It combines a clever concept with a surprise twist at the end that works so well in both the short-story and short-film format. It’s entertaining but not so unusual or substantial that I would think of it as Oscar-worthy.

Trying to decide which of these animated shorts I would vote for is more difficult. Each is well-executed, entertaining, and imaginative. I tried thinking which I would want to watch again, which I would recommend to friends. 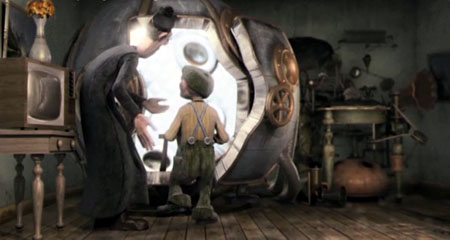 By those standards, there are again two stand-outs for me. I’d ultimately opt for Même les pigeons vont au paradis (Even Pigeons Go to Heaven), a French puppet film by Samuel Tourneux. It’s about a priest who attempts to sell a heaven-simulating machine to a miserly peasant about to be visited by the Grim Reaper. It’s fast-paced, very funny, and beautifully detailed in its depictions of the characters and settings. It’s not claymation, but it has some of the polish and wit of Aardman shorts. 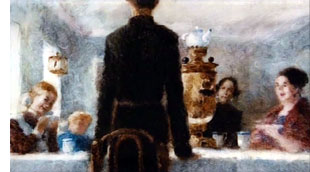 My close second choice would be a very different sort of film, My Love, from Russia, directed by Alexander Petrov. It’s a pretty, lyrical tale of a fifteen-year-old boy’s idealistic yearnings after a pretty servant girl and a more glamorous and mysterious woman who lives next door. The animation is impressionistic and shimmering, with constantly added brushstrokes transforming the compositions. Its visual style is derived from nineteenth-century Russian realist painting, especially that of Ilya Repin. 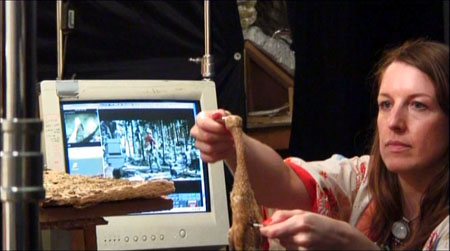 Suzie Templeton animating the Duck for Peter & the Wolf*

I suspect the Oscar winner might well be Peter & the Wolf [9], a British-Polish co-production that illustrates the classic Sergei Prokofiev tone poem. It was directed by Suzie Templeton [10] and made at the Se-ma-for Studios in Łódź. There’s no doubt that it’s an impressive item, with elaborate miniature studio sets that could pass for real landscapes, precise and amusing puppets, and a mind-boggling frame-by-frame manipulation of furry puppets that leaves nary a ripple in their hair. (The photo above hints at how the latter feat was accomplished.) Still, the appeal of the original music is its evocation of events in our mind’s eye, and for me the literal playing out of those events at times carried a faint air of tedium. It’s the sort of prestige project that one can imagine a lot of Academy members loving. 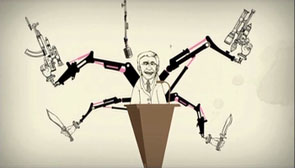 The same cannot be said for the edgier I Met The Walrus [11], from Canada. It’s derived from an existing soundtrack, a tape-recording made by a 14-year-old Jerry Levitan when he snuck into John Lennon’s hotel room and interviewed him. Now, many years later, director Josh Raskin has created an animated image track to accompany it. It’s a clever idea, but to me the illustrations of Lennon’s words soon became a bit too literal, and I found myself thinking that the animation was Terry Gilliam (in his Monty Python days, that is) meets Yellow Submarine meets Max Ernst collage-novel.

I’m very much of two minds about Madame Tutli Putli [12], the seemingly inevitable entry from the National Film Board of Canada (directed by Chris Lavis and Maciek Szczerborski). A puppet film four years in production, it is an extraordinary technical accomplishment. It deals with a mousey woman who takes a train journey that confronts her with bizarre and ultimately threatening events. The grim tone and grubby puppets and objects reminded me of Jan Svankmajer’s work. 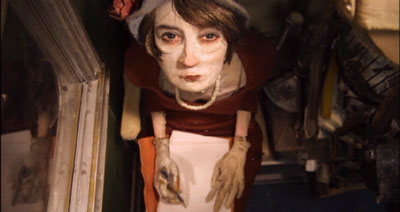 The most disturbing thing about the images, however, is not the subject matter but the creepily realistic eyes. To me it was obvious that real eyes had been superimposed onto the puppets’ faces. Investigating how this had been done, I found this brief making-of demonstration [13] on YouTube, which indeed revealed the main character to be a puppet with blank areas where the eyes would be. Looking further, I learned that the special effects were done by painter/animator Jason Walker, who devised a complicated process to coordinate the photographed eyes with the animation. Some demonstrations of that process are available here [14], and there is an interview with him here [15].

There’s no doubt that the technique is unnerving, and yet at the same time it’s distracting (if one notices it). Is it “fair”? Of course people have been combining live action and animation in various ways since the 1910s. Yet superimposing photographed elements in such a way as to make them appear to be part of the animation almost seems like cheating. Here one would be tempted to marvel at how skillfully the animators had simulated human eyes—a notoriously difficult subject to capture realistically. I suppose for many viewers the eyes and the rest of the image would blend seamlessly and not prove distracting. For me, it didn’t quite work.

Overall, the program is undoubtedly worth seeing on the big screen.

*The production image from Peter & the Wolf derives from a making-of short on the British release of the German-made DVD (from Arthaus Musik), which now seems to be out of print.