In December Kristin and I attended a wide-ranging conference at Rome University devoted to “Exploded Narration”—the effects that digital technology has had on storytelling in film and television. As our host Vito Zagarrio put it, the question is one of continuity or rupture. Have new formats like HD, the Internet, and DVD revolutionized media storytelling? Or are they serving traditional approaches?

Many papers explored the “rupture” option, while Kristin and I offered presentations that emphasized continuity. You can find one version of my argument elsewhere on this site [1]. Still, both of us also pointed up some innovations, or what I called “spillover” effects. As so often with such questions, the answer turned out to be complicated. 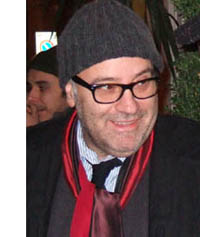 We enjoyed the conference, and one standout aspect was the presence of Amos Poe. Poe is probably best known for his first feature, Alphabet City (1985), and for his 16mm film on the Punk scene, The Blank Generation (1976). His Triple Bogey on a Par Five Hole (1991) has also attracted attention. For three decades Poe has worked as a director, producer, screenwriter, and teacher. The Sundance festival is playing Amy Redford’s The Guitar, which Poe wrote and coproduced.

Amos was great fun. A soft-spoken man with a quick and wicked sense of humor, he enlivened our dinners at various ristoranti. He also spoke extensively about screenwriting, which he teaches at NYU and at NYU’s Florence program. Like many screenwriters, he’s extremely intelligent and articulate about his craft. Three examples:

*How to learn screenwriting? Get a script version of a film you admire. Read the first ten pages, then closely watch the first ten minutes of the movie. Go back and read the next ten pages, and go ahead and watch the corresponding ten minutes. And so on until the end. Do this with three first-rate films, and you will have a concrete, intuitive understanding of how a screenplay works.

*A screenplay, Amos points out, isn’t a short story or novel or play. It’s a movie in words. It must make the reader see and hear an imaginary film, and not only the action, either. Without indicating specific shots, the descriptions should suggest the flow of long-shots and close-ups (”Her lipstick leaves a smear on the cigarette butt”). “The screenwriter is a filmmaker.”

*Write sounds into the background of scenes, setting them up for fuller presence later. If a train becomes important late in the story, mention the wail of a distant train early in the screenplay. This sort of auditory planting quietly strengthens the structure of the story in your reader’s mind.

Amos must be a terrific teacher. I learned a great deal from his descriptions of contemporary film conventions, several of which I hadn’t noticed before. Don’t be surprised to find some of them creeping into future blogs.

Given Amos’ expertise in mainstream storytelling, the film he presented was quite a surprise. It’s called Empire II, and though you don’t normally call a three-hour movie a delight, I can’t think of a better word. After a week of tourism and no films, it was just the sensuous boost that my hungry eyes needed. 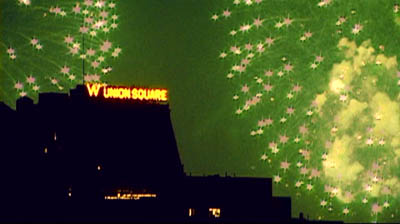 Man with a Video Camera

Poe’s apartment on Christopher Street yields a stunning view of the Manhattan skyline—the Chrysler Building, Jefferson clock tower, and of course the Empire State Building. He planted a Sony PD150 video camera at his window for a year, from 1 November 2005 to 31 October 2006, and took time-lapse shots. Through single-framing, he captured a total of 1 or 1 ½ seconds of every thirty seconds of real time. He shot traffic, people, skies, and the horizon. He did not look at the footage until after the year was up.

He wound up with sixty hours of imagery. He then made an absolute gesture. Using Final Cut Pro, he compressed all sixty hours into three. What was already highly elliptical, a string of tiny slices of action, became enormously accelerated.

Poe and his students then spent months blending up to forty tracks of music, spoken verse, and sound effects. It’s a crisp stereo mix, with remarkable audio-visual correspondences: whipping wind and ticking machinery sync up with snow and the tower clock. The music, which ranges from alt-rock to Keith-Jarrettish piano strumming, works sympathetically but not redundantly with the imagery. (No surprise that Poe has made music videos.) Shooting the film cost virtually nothing, but Poe spent about $100,000 for music clearances, though old friends like Patti Smith and Deborah Harry gave him their material for free.

The result is a city symphony, a lyrical tribute to the looks and sounds of New York. It joins the tradition of Walter Ruttmann and Dziga Vertov, as well as Paul Strand’s Manhatta (1921) and Jay Leyda’s Bronx Morning (1931). It also reminds you that Poe has roots in the downtown avant-garde. In 1972-1975, he often watched works by Jonas Mekas, Stan Brakhage, Michael Snow, Bruce Baillie, and Jack Smith at Millennium Film Workshop, and he made films for its Friday night open screenings. As a result, Empire II carries premises of lyrical and Structural cinema into the digital era.

The conditions of production are at once subjected to strict guidelines—a single year, only views from the window, the 20x compression—and open to chance. As with the films of Ernie Gehr, chance becomes more felicitous when set within a rigid frame. “I needed to create a base for accidents to happen.” Poe refused to cut or rearrange what he had (”I don’t edit unless I get paid for it”) and so he was ready to accept what came out. “I had to let go of the result.” That result mixes smoothness and fracture; the moon arcs like a golf ball, but traffic hammers relentlessly in a way recalling the last sequence of Man with a Movie Camera. Every so often there are calm islands of blank frames, provided by Poe’s occasional neglect to set focus or exposure.

Poe’s Book of Hours and Days

The title pays homage to Warhol’s 1964 film, so often discussed and so little seen. In many ways, though, Poe gives us an anti-Empire. Instead of a silent film, sound, both aggressive and immersive. (The stereo tracks shoot noises bouncing across channels, swallowing you up.) Instead of a single night, a year’s time span. Warhol shot Empire at 24 frames per second but insisted on projecting it at 16, slowing up time; Poe’s single-frame sampling and frantic acceleration speed time up. Warhol used for the most part a single camera position and shot in long takes, but Poe presents a flutter of shots. The framing is steady, but what we see flickers and pulsates, creating superimposition effects comparable to Ruttmann’s and Vertov’s slashing diagonals. 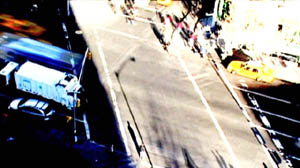 Warhol was withdrawn and impersonal, but Poe turned on the camera when he spotted something that looked interesting. He felt free to focus, reframe, zoom, and shift camera position for different angles on the life beyond his balcony. Likewise, the automaton Warhol (”I’d like to be a machine”) is counterposed to Poe’s more organic sensibility. He never lets us forget the flowers twitching on his windowsill, and their growth and rearrangements become traces of his daily life in the apartment.

The rules are simple and viewer-friendly. We instantly recognize the trappings of city life; we know the cycles of the seasons and the shifts between night and day. This cogent structure throws all our attention on what we see from moment to moment, and how we see it.

The Empire State Building and the skyline around it, along with the flowing clouds, remain stable reference points for a flurry of visual transformations. The taxis and pedestrians we glimpse move in jagged, incomplete rhythms very different from the smooth flow of fast motion in Godfrey Reggio’s films like Koyaanisqatsi. 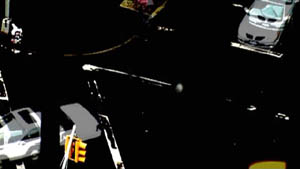 As you see, high angles, plays of focus, and tight framings provide energetic abstraction. Flaring exposure makes the Building look like it’s in flames, triggering echoes of the 9/11 attacks. 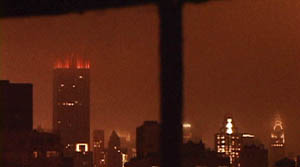 When the weather changes, the light does too. Raindrops become not only a pebbly surface on the windows but tiny filters. As with Warhol’s films, we have to change our conception of what counts as an event. Slight differences of framing and texture become visual epiphanies. Rain can be gray-green, and snow can go pale red. At times, the steeple clock face in the lower right becomes an imperturbable timekeeper, a sort of pictorial timecode, reminiscent of the clock in the corner of the shots of Robert Nelson’s Bleu Shut (1971). 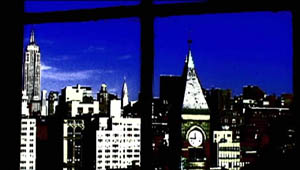 Spring comes about halfway through. It’s as lyrical as you’d expect, but again the colors startle. If snow can be red, then budding trees can be blindingly white. 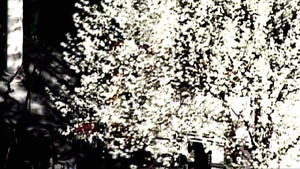 Empire II is at once exuberant and tranquil. What a pleasure to find a film devoted simply to seeking out beauty in everyday surroundings. “She celebrates the small,” sings Jimmie James while we see snow lashing the sidewalks. So does Poe. He has said that he made the film at a difficult period of his life, but what he has given us, I think, is jubilation. 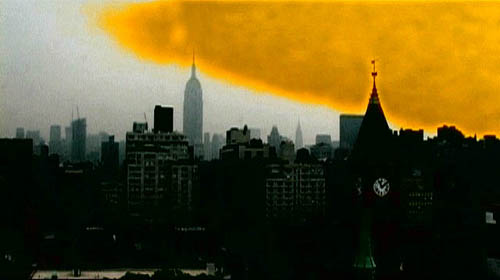