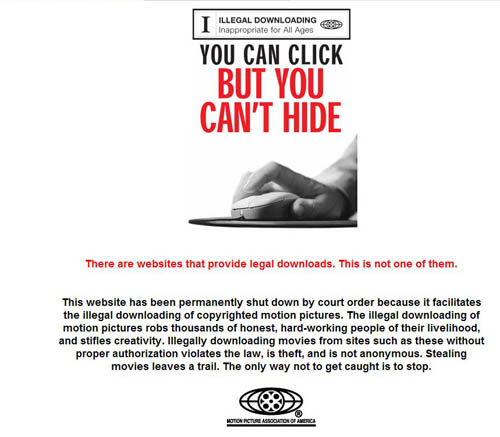 The Motion Picture Association of America [1]is the trade association of the major film production and distribution companies. Founded in 1922, it helped the Hollywood studios maintain their control of the US industry and foster its business abroad. (See Kristin’s book Exporting Entertainment for an explanation of how it worked.) In 1945 the MPAA split off its international efforts and created a subsidiary, the Motion Picture Export Association of America, which helped the majors move in a systematic way into world markets. The current MPAA members are the Big Six: Sony (Columbia), Buena Vista (Disney), Universal, Paramount, Warner Bros., and Twentieth Century Fox.

About fifteen months ago, the MPAA created a survey called My Movie Muse. Reading about it in Variety, I eagerly signed up. Every three or four months My Muse contacts me and asks me to answer some questions. At the end of the survey, I’m told that my name has been entered in a drawing for a gift certificate from Amazon.

I’ve never won. I’ve never heard who did. Maybe I won and the MPAA forgot to tell me.

The Movie Muse survey started last year with 7500 participants. You can join us by going to the website [2].

The initiative, according to MPAA head Dan Glickman [3], enables moviegoers to tell the industry their concerns.

People want to have input. They want to know that their movie viewing experiences are worth their time and money, and they want to know that our industry is hearing their criticisms and demands. In this age of participatory media, My Movie Muse will give consumers an opportunity to be heard.

Unfortunately, we Musers have little opportunity to say anything that doesn’t fall into a narrow set of multiple-choice queries. Let’s take a little drive through the questions. Beware the speed bump.

Eyes on your own paper, buddy

Every Muse form I’ve filled out is essentially the same, with a few seasonal variants. (What is your favorite Halloween movie?) The Muse announces that some questions will be repeated every few months “so that we can see how your opinions change over time.” You could perhaps make the Muse happy providing different answers at each iteration of the survey.

The Muse’s first clutch of questions involves your opinion of movies in general. Do you like ‘em or dislike ‘em? Do you think they’re better than they were in the 1990s? How do they compare with other forms of entertainment, like TV shows, videogames, and music? Do you like indies, kid movies, dramas, comedies, animation, documentary, whatever? How often do you see movies in theatres, rent DVDs, buy DVDs, or watch a movie online? How do you like the moviegoing experience in your local theatre? And so on. This is all pretty banal and anodyne, though I can imagine a firm using these data to help back up production decisions. (“See? I told you nobody likes Westerns.”)

The Muse proffers the Don’t Know option often, sometimes to puzzling effect. Is Don’t know really an appropriate answer to statements like the following?

Movies are often a topic of conversation among my friends.

I like to watch my favorite movies over and over again.

I use a DVR, iPod, computer CD or DVD burner on a regular basis.

Movie plots are more predictable than they used to be.

If you don’t know, they’re probably not more predictable, at least to you. Another question asks:

Did you know that some movie theaters offer programs for frequent moviegoers, where you can earn free popcorn, sodas, and movie tickets depending on how many times you go to the theater?

In any case, the speed bump comes up soon enough. Not to scare you, but maybe there’s some serious stuff ahead.

Don’t know what a slide rule is for

Are you aware of peer-to-peer file-sharing services that allow you to download full-length films or TV shows via the Internet for free?

Again we get Don’t know as an option, which isn’t really viable. Try telling an interrogator allowed to use harsh measures, I don’t know if I’m aware of peer-to-peer file-sharing services. . . But now there’s another option: Prefer not to say. Good choice. Too bad it won’t come up again.

We’re asked how often we download purchased movies and TV shows, download bootleg material, buy bootleg DVDs, copy DVD files to hard drives, and receive CD or DVD copies from a friend. The Muse is also curious about how often you copy such material to disc for a friend, or for your personal use. The permitted answers range from Never to 4 or more times a month. This menu may need revising; I suspect some of my friends pursue these activities 4 or more times an hour.

Anyhow, it seems likely that nearly everybody between the ages of 4 and 50 has done at least one of these things. You’d prefer to say Prefer not to say, but the only evasive tactic is Don’t know.

You recall the Perry Mason trick: After the sweating witness has testified, Perry asks, “Are you aware of the penalties for perjury?” Something similar happens here. Once the Muse establishes that you’ve surely broken the law, with relentless prosecutorial logic it asks if you did so willfully. Getting cozy in a Good Cop way, the Muse acquires a singular personal pronoun:

For each of the following activities, please tell me whether you think they are legal or illegal:

Copy a movie or TV show on a CD or DVD to give to someone else.

Copy files from DVDs onto your hard drive.

Go to a file-sharing site and download a TV show for free.

Receive a copy of a movie or a TV show on a CD or DVD for your own use—to watch whenever you want.

But the statements are too bald and inexact. These activities aren’t necessarily illegal, according to intellectual property attorney Jim Peterson:

The work might be in the public domain (too old, registration or renewal failure) or it might be a fair use. You could conceivably download a movie as a fair use for your own scholarship without violating the DMCA prohibitions on defeating copy protection or removing copyright management information. The guy who cracked the copy protection on the DVD probably has some Digital Millennium Copyright Act problems, though. Same thing with buying a bootleg DVD. I don’t think buying is illegal; it’s selling that’s the problem.

Since the Muse’s questions don’t allow for such nuances, once more the Don’t know option is looking mighty attractive.

My Muse goes on to ask if any of the following considerations would affect your decision to undertake the illegal activities you’ve already mentioned. Now if you thought that they were all legal, or if you answered Don’t know, then presumably you don’t have to reply to what follows. In any case, imagine Penn Gillette reciting each of these possibilities in his most explosively disrespectful voice, with expletives freely inserted. Would you avoid breaking the law . . .

If official DVDs were $5 cheaper?

If tickets for the movie theater were $2 cheaper?

If a portion of the DVD price was contributed to charity?

If you were concerned that buying and downloading unofficial copies was tied to criminal activities or terrorism?

If friends or somebody in your community were being prosecuted for a similar activity?

If you received a notice warning you that you might be prosecuted?

If you got off with a wrist slap and a threat of future surveillance?

If you were made an example in order to deter other scum?

If specially-made DVDs carried an electrical charge of 50,000 volts to be shot into a user when s/he sought to copy them?

Granted, I made up some of these, but maybe you can’t tell which ones. Anyhow, the correct answer is Don’t know, said quickly ten times with your hands over your ears.

Suppose you say you don’t download movies illegally. Then My Muse, not one to back off, asks why you don’t break the law. The lengthy set of options includes such noble justifications as I don’t have the time, I don’t know how to do it, I don’t like to watch movies at my computer, It takes too long, and I wouldn’t get the DVD bonus materials. For such freedoms brave men died.

The replies It is illegal and I’m afraid of getting prosecuted and sued come at the very end. Correct answer: Oh, riiight . . . It’s illegal. Sure . . . that’s it . . . Illegal. Of course, if the purpose of the questionnaire is not to find out what we think but to tell us what to think, then these questions come at the right moment. They tacitly say: All of the above-mentioned things you are doing, or are now thinking about doing, can be punished by lawsuits and a stay in the Big House.

The last page offers you a list of legal movie download sites, asking if you recognize or use any of them. I recognized most, but Guba and Vongo were new names to me. I don’t think I could bring myself to use any service, even for roto-rooting purposes, called Guba or Vongo.

Just as you’re ready to pack your toothbrush for the holding tank, the Muse gives a cheery farewell. “That’s it! . . .You’re done!”

When My Muse went online last year, industry observers noticed right away that the survey seemed more about selling people the MPAA’s line on copyright than about getting their responses. Anthony Kaufman [4], one of the dueling cavaliers of the cineblogosphere, wrote:

The leading questions are clearly part of a larger MPAA struggle to bolster copyright initiatives and crack down on fair use, file sharing and anything that threatens the bottom line of the international conglomerates. Dan Glickman may be the kinder, gentler face of the MPAA in the wake of Jack Valenti’s exit, but if his demeanor is softer, his goals are still just as nefarious.

This is a plausible interpretation. But I don’t want to rule out the possibility that the studios might really listen to my write-in request that they upgrade release prints and stick with 35mm instead of going digital. Or maybe the MPAA is branching out into online entertainment, like those commercials, quizzes, and snack-bar plugs that come up before the trailers. Is My Movie Muse a trial balloon for a new feature, DRM: Be Very Afraid?

I’m not holding my breath for my Amazon certificate either.