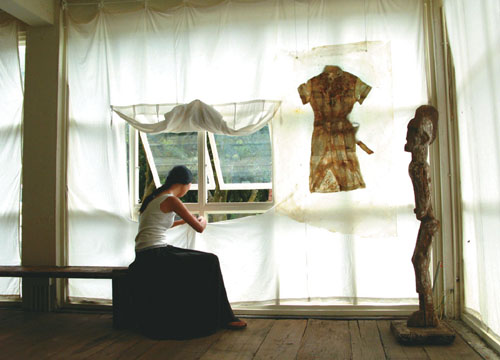 I’m so taken with José Luis Guerin’s En la ciudad de Sylvia (Spain/ France) that I’ll be devoting a separate blog entry to it soon. At Vancouver it was projected with his Unas fotos en la ciudad del Sylvia, a remarkable sketchpad for and rumination on the feature. Rubbed together, the two films throw off sparks. En la ciudad is in color and very tightly constructed, Unas fotos consists of hundreds of black-and-white stills linked by associations and intertitles, with no sound accompaniment. Guerin, an admirer of Murnau, says that as a young man he watched old films in “a sacred silence” and he wanted to try something similar.

Unas fotos may not be factual—call it a lyrical documentary—but it illuminates En la ciudad in striking ways and is intriguing in its own right. Structured as a quest for a woman the narrator met 22 years ago, the film moves across several cities and invokes as its patrons Dante and Petrarch, each of whom yearned for an unattainable woman. But this isn’t exactly a photo-film à la Marker’s La jetée; it uses dissolves, superimpositions, and staggered phases of action to suggest movement. The subjects? Dozens of women photographed in streets and trams. Some will find a creepy edge to the movie, but it didn’t strike me as the obsessions of a stalker. Guerin becomes sort of a paparazzo for non-celebs, capturing the many looks of ordinary women.

Watch this space for more on the many looks of Sylvia. For now, more Asian highlights from Vancouver. 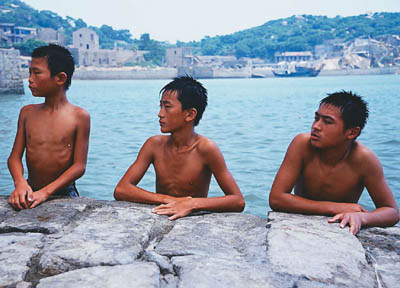 Johnnie To and Wai Ka-fai have reunited for The Mad Detective (Hong Kong), which is as off-balance as you’d expect from its premise. Evidently spun off those TV series that feature telepathic profilers, the film stars Lau Ching-wan as a detective who solves cases by intuiting crooks’ “inner personalities.” We’re introduced to him crawling into a suitcase and asking his partner to throw it downstairs. After a few bumpy descents, he flops out and names the man who packed up a girl’s body the same way. Soon Lau is mentally reenacting a convenience-store robbery, and To/Wai cut together various versions of it as he plays with the possibilities.

Years after Lau leaves the force, his partner brings him back as a consultant to another case. By now, though, our mentalist has gone mental. The filmmakers get comic mileage, and some genuine poignancy, out of intercutting his hallucinations with what’s really happening. Lau envisions multiple personalities within the man they’re hunting, and as he traces out clues each personality flares up. To and Wai carry their dotty premise to a vigorous climax that multiplies the mirror confusions of both Lady from Shanghai and The Longest Nite. The brilliant sound designer Martin Chappell is back on the Milkyway team, making the effects and music magnify Lau’s heroic disintegration.

Secret Sunshine earns its 130-minute length, because Lee needs time to do several things. He traces the assimilation of a widow and her little boy into a rural town. Then he must follow the remorseless playing out of a harrowing crime. He makes plausible her succumbing to fundamentalist Christianity and her growing conviction that she needs to forgive the criminal. And there are more changes to come.

For me the most unforgettable moment was the heroine’s appalled confrontation, in a prison visiting room, with the man who wronged her. His unexpected reaction dramatizes how religious faith can cultivate both emotional security and an almost invincible smugness. Jeon Do-yeon won the Best Actress award at Venice for her nuanced performance, and Song Kang-ho, best known for The Host and Memories of Murder, lightens the somber affair playing a man of indomitable cheerfulness and compassion.

I found Brillante Mendoza’s Slingshot (Philippines) quite absorbing. Hopping among various lives lived in the Mandaluyong slums, it’s shot run-and-gun style, but here the loose look seems justified by both production circumstances and aesthetic impact. It was filmed on actual locations across only 11 days, and though it feels improvised, Mendoza claims that it was fully scripted and the actors were rehearsed and their movements blocked. Most of the actors were professionals, intermixed with non-actors—a strategy that has paid off for decades, in Soviet montage films and Italian Neorealism. Slingshot reminded me of Los Olvidados, both in its unsentimental treatment of the poor and its political critique, the latter here carried by the ever-present campaign posters and vans threading through the scenes. I suspect that the final shot, showing an anonymous petty crime accompanied by a crowd singing “How Great Is Our God,” would have had Buñuel smiling.

Off to China for Fujian Blue by Robin Weng (Weng Shouming). The setting is the southeastern coast, a jumping-off point for illegal immigration. The plotline has two lightly connected strands. In one, a boys’ gang tries to blackmail straying wives by photographing them with boyfriends, going so far as to sneak in homes and catch the couples sleeping together. The other plot strand presents Dragon, a boy who’s trying to sneak out of China and make money overseas. The whole affair is reminiscent of Hou Hsiao-hsien’s Boys from Fengkuei, and in Dragon’s story we can spot overtones of Hou’s distant, dedramatized imagery. Yet Weng adds original touches as well, including an almost subliminal ghost of London across the blue skies of the China straits. 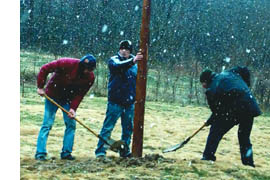 Fujian Blue shared the festival’s Dragons and Tigers Award with Mid-Afternoon Barks (China) by Zhang Yuedong. The two films are very different; if Weng echoes Hou, Zhang channels Tati and Iosseliani. (When I asked him if he knew the directors, he didn’t recognize the names.) Mid-Afternoon Barks is broken into three chapters. In the first, a shepherd abandons his flock and wanders into a village. An unknown man shoots pool. Dogs bark offscreen. The shepherd shares a room with another visitor, but midway through the night, the innkeeper orders them to put up a telegraph pole. When he awakes, the man is gone, and so is the pole. He wanders on.

In the second episode . . . But why give away any more? In this relaxed, peculiar little film Beckett meets the Buñuel of The Milky Way and The Discreet Charm of the Bourgeoisie. As the enigmatic men without pasts or even psychologies wound their way through the long shots, Zheng’s quietly comic incongruities won me over long before the last dog had barked and the last ball had bounced.

Jia Zhang-ke is known principally for fiction films like Platform, The World, and Still Life, but from the start of his career he has shown himself a gifted documentarist as well. His In Public (2001) is a subtle experiment in social observation, and Dong (2006) made an enlightening companion piece to Still Life. Useless is more conceptual and loosely structured than Dong. Omitting voice-overs, Useless offers a free fantasia on the theme of China as apparel-house to the world.

The first section of the film presents images of workers in Guangdong factories as they cut, sew, and package garments. Jia’s camera refuses the bumpiness of handheld coverage; it opts for glissando tracking shots along and around endless rows of people bent over machines. (Now that fiction films try to look more like documentaries, one way to innovate in documentaries may involve making them look as polished as fiction films.) Jia also gives us glimpses of workers breaking for lunch and visiting the infirmary for treatment.

In a second section, Useless follows the success of a fashion house called Exception, run by Ma Ke. Her new clothing line Inutile (Useless) consist of handmade coats and pants that are stiff and heavy, almost armor-like, and that flaunt their ties to work and nature. (Some outfits are buried for a while to season.) Ending this part with Ma’s Paris show, in which the models’ faces are daubed with blackface, Jia moves back to China and the industrial wasteland of Fenyang Shaoxi. There he concentrates on home-based spinning and sewing. Neighborhood tailors patch up people’s garments while the locals descend into the coalmines. A former tailor tells us that he gave up his work because large-scale clothes production rendered him useless.

Jia’s juxtaposition of three layers of the Chinese clothes business evokes major aspects of the country’s industry: mass production, efforts toward upmarket branding, and more traditional artisanal work. Without being didactic, he uses associational form to suggest critical contrasts. The miners’ sooty faces recall the Parisian models’ makeup, and their stiff workclothes hanging on a washline evoke the artificially distressed Inutile look. What, the film asks, is useless? Jia shows industrial China’s effort to move ahead on many fronts, while also forcefully reminding us of what is left behind.

Thanks to Alan Franey, PoChu AuYeung, Mark Peranson, and all their colleagues for a wonderful festival. They’re so relaxed and amiable, they make it look easy to mount 16 days crammed with movies. Be sure to check on CinemaScope [2], the vigorous and unpredictable magazine that makes its home in Vancouver. It gives you many gems online, but it’s well worth subscribing to.