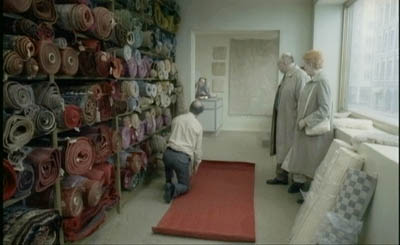 “Be pleased, then, you living one, in your delightfully warmed bed, before Lethe’s ice-cold wave will lick your escaping foot.” As a tram destination, Lethe makes a brief appearance in the Swedish film You, the Living, Roy Andersson’s latest comedy of trivial miseries. The line from Goethe is apt. After ninety minutes of drab apartments and Balthus-like figures, all bathed in sickly greenish light, you’re ready to stay in bed forever.

As in Songs from the Second Floor, Andersson gives us a loose network narrative, with barely characterized figures threading their way through urban locales. Long-shot, single-take scenes turn clinics and dining rooms into monumentally desolate spaces. Humans, either bulbous or emaciated, trudge through torrential rain and peer out from distant windows. The bodies may be distorted and careworn, but the spaces are even more so. We get a sort of dystopian Tati, in which gags, near-gags, and anti-gags are swallowed up in the cavities we call home and workplace. A carpet store stretches off into the distance, and a cloakroom seems like a basketball court. 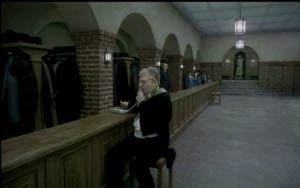 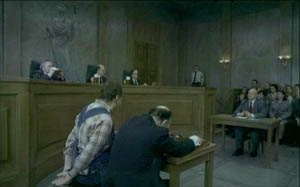 In You, the Living, Andersson’s characters recount their dreams, and these open onto areas only a step beyond our world in their lumpish crowds and eerie vacancy. Judges at a trial are served beer as they condemn the accused. Spectators at an electrocution snack on popcorn from supersized buckets. How can I not like a filmmaker so committed to moving his actors around diagonal spaces, even if the frame is either sparse or uniformly packed, and though he does treat his people like sacks of coal? Don’t look for hope here, only a sardonic eye attracted by banality and pointlessness, images made all the bleaker by an occasional song. 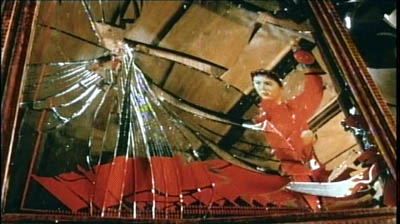 I’m drawn to directors who create a powerful visual and auditory world more or less out of phase with reality as we usually see it (in life and in movies). Andersson is one such director; Jiang Wen is another, whose audacious The Sun Also Rises is one of my favorites of the festival so far. Not doing so well with Mainland Chinese audiences, according to the International Herald Tribune [2], it hasn’t warmed up a lot of Western critics either. Amazingly, it was declined for competition at Cannes.

It seems impossible to discuss The Sun Also Rises without using the word “magic,” as in magic realism, but I saw it as more of a fairy tale or fable. Set in the Cultural Revolution, it tells two stories in the first two sections. A young boy’s mother goes a little mad on a labor farm; in another village, a teacher is compromised by the passionate love of a nurse and an accusation of sexual misconduct. The two stories intersect in a third section, which leads to a jubilant, if disconcerting, final stretch.

At the center of each plot stands a vivacious, passionate woman who unleashes a cascade of unhappy events. Yet the tone of the film is cheerful, almost giddy, thanks not only to Joe Hisaishi’s buoyant score (he may now be the Nino Rota of Asian cinema) but to Jiang’s fresh, assured technique. The movie starts with tight close-ups—the fish-design shoes the mother wants, her feet and hands, her son’s hands at the abacus—edited at a cracking pace. Staccato movements in and out of the frame give the whole passage a visual snap that launches the movie. Characters lunge through the shots, running this way and that without catching breath, and Jiang’s camera follows them without pausing for the sort of stately scene-setting that audiences may expect. Likewise, the second story opens with hands at play and work, the teacher stroking his guitar strings and a bevy of woman kneading bread dough.

The exuberance of the characters and the style contrasts with the usual presentation of this cruel era of PRC history. Jiang finds real pleasure in Cultural Revolution kitsch, and he links a snapshot of the missing father to an iconic image from The Red Detachment of Women. It’s another knot joining the two plot strands; in the second section, villagers watch a screening of that film. Jiang makes the event a real festivity, with couples courting, the teacher humming along with the tunes, and an old lady feeding fish in a pond. Jiang dares to suggest that the force-fed popular culture of Maoism, so scoffed at now, gave genuine enjoyment 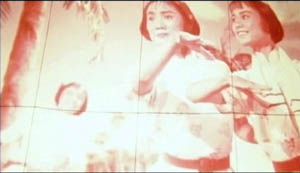 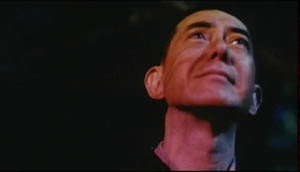 The fairy-tale atmosphere is conjured up by little mysteries, such as a talking bird and the possibility of taking dictation on an abacus, and bigger ones about fatherhood, a stone hut in the forest, and a shadowy figure named Alyosha, whose identity is more or less revealed in the film’s final long sequence. Variety‘s Derek Elley [3] found The Sun Also Rises both rushed and dawdling, but you could say that about 8 ½ too. Like Fellini’s film, Jiang’s shows a filmmaker at the top of his powers inviting us to savor the exhilarating attractions of imagination. 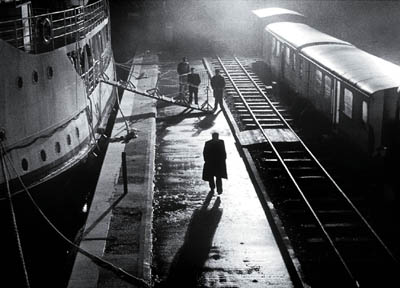 Another world, another vision. The camera frames a rope descending into black water and tilts slowly, really slowly, up to reveal the ship’s prow and the deck, swathed in darkness. Two silhouettes are visible, and one says, “Don’t follow me too soon.” Soon we’re following the transfer of a small suitcase, the disembarking of passengers making their way to a train. This nearly thirteen-minute shot (!) gives way to another long take, in which we see, in the distance, a murder on the quay.

Béla Tarr has called The Man from London a film noir, and he explained that to me by saying, “Not an American film noir. They were done by bad directors. More like the original French film noirs.” Indeed, the opening shot, with its mists and murky waterfront, suggests Quai des brumes. But here the plot action is slight, presented at a distance, and opaque in its motives; 10 % story, we might say, but 90 % atmosphere. The camera coasts across the waterfront town with the same grave deliberation we see in Damnation, Sátántangó, and Werckmeister Harmonies, swallowing up the Simenon situation in Tarr’s fluid way of seeing, a scanning of ever-shifting surfaces and vistas.

With fewer than thirty shots across about 133 minutes, The Man from London is another exercise in long-take virtuosity, but I thought I noticed some fresh departures. For one thing, there are few characters and relatively few locales, and situations are brought out with unusual explicitness (for Tarr). Instead, it seemed to me that Tarr was exploring new possibilities in one of his pet techniques, the over-the-shoulder long shot I mentioned in an earlier entry [4].

The opening shot, at first an apparently objective survey of the moored ship, turns out to be a view from the tower manned by Maloin. In shooting the wharf, the camera is forever oscillating, within a single shot, between what we can see outside, at a distance, from a high angle, and glimpses of Maloin at his post, his head or shoulder sliding into the foreground. Imagine Rear Window without the reverse shots of Jimmy Stewart watching.

In earlier films, Tarr tended to be quite clear when his foreground character was noticing something in the distance; his chief interest lay in suppressing the character’s reaction. What we get here can be seen as a refinement of the opening shot of Damnation, with its awesome landscape gradually reframed by Karrer looking out his window, or of passages of the doctor at his window in Sótántangó. Several of the tower scenes in The Man from London, are elaborations of that image scheme, but with more ambiguity. The camera, slipping from long-shot background and close-up foreground, coasts along without telling us whether Maloin has seen exactly what we’ve seen. The result is a suspenseful uncertainty not only about what’s happening in the noir plot but also about what Maloin knows.

There are many other points of interest in the new film, and after one viewing I can’t claim to have a grip on them. But I do think critics have overlooked its sheer visual beauty and Tarr’s efforts to turn his style toward a fluid pictorial suspense. 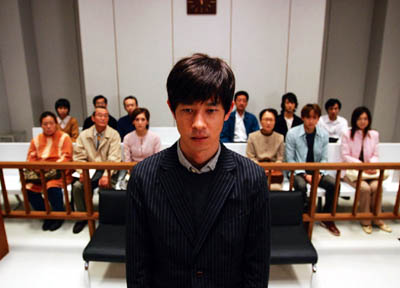 Altogether less flamboyant than any of these was Suo Masayuki’s I Just Didn’t Do It (Japan), which I’d been looking forward to since my February entry [5]. It’s definitely a change of pace for a director known for comedies that satirize youth culture and middle-aged boredom. A young man is accused of groping a schoolgirl on a crowded traincar. The police advise him to confess and pay a fine, but he insists on his innocence. This decision drops him into a judicial mill that grinds slow and altogether too fine.

The script carpentry seems to me excellent. The presentation of each phase of the boy’s case could have been dry, but Suo makes each step hinge on a detail of fact or inference, so small questions keep popping up—including questions about whether the boy really might have done it. The finale, which recalls Kurosawa’s Ikiru in its methodical summing up of everything we have seen, becomes grueling, but in a salutary way. In Japan, the film is a trailblazing critique of the criminal justice system, where most people arrested confess in order to avoid the almost inevitable guilty verdict in a trial. Eliminating a jury, barring defense counsel’s discovery of prosecution evidence, and capriciously replacing one judge by another midway through a case, the system encourages cynical submission.

Suo avoids stylistic pyrotechnics. He plays down his signature mugshot framings (the publicity still above is an exception) and has recourse to handheld camerawork simply to distinguish the train scenes from the rest of the film. Still, his shooting displays a quiet agility. The high point is probably the testimony of the schoolgirl, her identity protected by screens set up around her. Suo finds a remarkable variety of camera setups here, each well-judged to impart a particular piece of information. (In its resourceful changes of viewpoint, the sequence reminded me of Mizoguchi’s courtroom scenes in Taki no Shiraito and Victory of Women.) The title suggests a strident social-problem film, but Suo’s calm plainness of handling yields a quality rare in the genre: tact.

Many more films to report on, including Johnnie To’s latest, but I must rush off to—what else?—another movie. I’ll try for a wrapup on Thursday, while I’m on that highway in the sky.