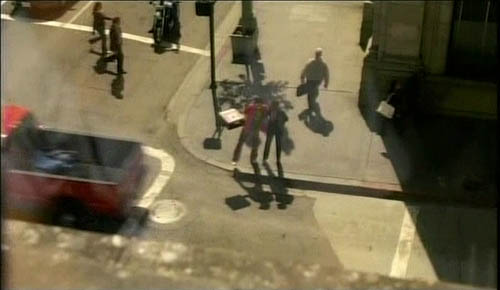 Today some notes about cinematic storytelling in two trilogies, one long and one lasting only ninety seconds.

Extreme ways are back again

Yes, one more entry on The Bourne Ultimatum, which I thought I was done with. But alert reader Damian Arlyn sent me an email proposing an ingenious explanation for Ultimatum‘s repetition of a scene from The Bourne Supremacy. (Something like his idea is also suggested here [1] and here [2].)

After yet another viewing, I agree: That scene is the same piece of plot action, replayed in a new context. This makes the film’s structure more interesting than I’d thought in my entries here [3] and here [4].

Continue at the risk of spoilers.

At the climax of Supremacy, Jason kills Marie’s assassin in a traffic-clogged tunnel. He then visits the daughter of the Russian couple he murdered during his first CIA mission. The epilogue of Supremacy takes place in New York City. Jason calls Pamela Landy while he watches her in her office from an opposite building. Apparently as a token of thanks, Pam tells him his real name and adds his birthdate: “4/15/71.” Supremacy ends with him striding off with a shoulder bag and vanishing into the Manhattan crowd.

The phone conversation is replayed in Ultimatum. Bourne and Pam are in the same clothes, her office furniture is the same, what we hear of the dialogue is identical. But now the sinister Deputy Director Noah Vosen is monitoring the call, so at moments we see the scene refracted through his and his technicians’ eavesdropping. Just as important, Pam’s report of Jason’s birthdate turns out to be inaccurate. She has given him a coded reference: the building where he received his initiation into the assassin’s life is 415 71st Street. He heads there to confront Dr. Albert Hirsch, his Svengali. The script has played fair with us on this: We’ve had opportunities to glimpse Bourne’s real birthdate (9/13/70) on the paperwork Pam flicks through in an earlier scene.

You could argue that this replay dilutes the emotional force of the Supremacy scene. Instead of giving Jason back his identity, a gesture of emotional bonding, Pam presents yet another clue of the sort that has linked Bourne’s quest throughout the film. Feeling, one might say, has been replaced by espionage-movie plot mechanics. But I think that the device is more interesting than that. For one thing, if you’ve seen the first film, there will still be the lingering memory of your sense of Pam’s sincerity and Jason’s gratitude. Just as intriguing are the structural consequences.

If we imagine the second and third installments in the franchise as presenting one long story, the original phone conversation in Supremacy comes after most of the events we see in Ultimatum. Ultimatum begins with Bourne in Moscow, limping as he was upon leaving the daughter’s apartment and still spattered with blood from the tunnel chase. That is, the prologue of this film carries on continuously from the end of the second film’s climax, but long before its epilogue in New York.

After a title announcing, “Six Weeks Later,” Bourne’s European globetrotting in Ultimatum begins. Meanwhile, back at the CIA Pam explains that Jason had gone to Moscow to find the daughter. The bulk of the film carries him to Paris, London, Madrid, and Tangier, all the while trailed by the agency. The final clue brings Bourne to Manhattan. Only then does he visit the building opposite the CIA station and make the call we’ve already, and incompletely, seen at the close of the second film. This new version of the scene initiates the final section of Supremacy, as Bourne sends the agents on a false trail, breaks into Noah’s office to grab incriminating documents (which he tucks into that shoulder bag), and makes his way to 71st Street and his fateful confrontation with Hirsch.

So the two films mesh intriguingly. Most of film 3 takes place just before the end of film 2, making the epilogue of 2 launch the climax of 3. This is a step beyond the more common sort of flashback to founding events in the story chronology, the tactic used at the start of Indiana Jones and the Last Crusade and The Lord of the Rings: The Return of the King. In these films, the jump back in time is more obviously signposted than in the Bourne movies.

The screenwriters Tony Gilroy, Scott Z. Burns, George Nolfi, and Tom Stoppard (uncredited) have made a clever and welcome innovation that I didn’t appreciate at first. I’m happy to finally understand it, though, because it fits into a trend I discussed in The Way Hollywood Tells It and an earlier entry [5]. Some filmmakers today create looping, back-and-fill story lines that tease us into watching the movie over and over on DVD, à la Memento and Donnie Darko. There are still some Bourne questions lingering in my mind, so I guess Universal can sign me up as a DVD customer. . . sigh.

I’ve seen so much in so many places

Speaking of The Way, there I also noted the growth in contemporary cinema of what I call network narratives, or what Variety calls criss-crossers. These are films with several protagonists connected by friendship, kinship, or accident. The characters pursue different goals but as the film develops their actions affect one another. The classic examples are Nashville, Short Cuts, and Magnolia, but in writing about this strategy for my collection Poetics of Cinema, I found over a hundred such movies.

This week I noticed that a trio of TV commercials from Liberty Mutual Insurance seems to be influenced by this format. Each of these “Responsibility” ads compresses network principles into thirty seconds, while also adding a Twilight-Zoneish time warp. You can watch the ads here [6].

Each commercial begins by showing a woman and a pizza-delivery kid at a street corner. She thrusts out her arm to keep him from striding into the path of a car.

Somebody sees the woman’s act of kindness, and then that person is shown doing something kind. Someone else sees the second person and then is shown being kind, and so on. For example, in one variant a man across the street notices the woman and the delivery boy, and then he helps a lady with a baby get off a bus. He is watched by a man at the bus stop, who then is shown helping someone else. Like a benign contagion, solicitude spreads from person to person.

So we have a very slight set of connections: A is seen by B who is seen by C and so on. This patterning seems comparable to the shifting plotlines and viewpoints we find in some network films, with each character connected by accident and spatial proximity. The framings orient us by overlapping bits of space; the pizza boy’s red jacket gives us a landmark in the foreground, as does the bus in the later shot.

More interestingly, all three ads start with the same situation, the woman and the pizza boy, but they move on to different B’s, C’s, etc. In the variant I just mentioned, the man watching is sitting across the street. In another one, the woman’s act of responsibility is observed by the biker behind her, and he becomes B in a new chain of connections, setting out a traffic cone to warn drivers.

The biker is visible in the first shot of the other ads (see above), but there he plays no role. In the third ad, a man watching from above sees the pizza-boy mishap. (His point-of-view shot is at the top of this post.)

So, as with Jason’s and Pam’s conversation in Bourne, we have a narrative node or pivot that is contextualized differently in another film. What allows this to work, I suggest, is a piece of our social intelligence–our understanding that chance can connect people—plus our cultural experience with storytelling, particularly network narratives. The oddest twist, though, comes at the end of each ad, which like the Bourne trilogy offers an interesting repetition.

Each string of actions ends with the woman we saw at the beginning observing someone else’s act of kindness. For example, in one ad she sees a man at an airport baggage conveyor help an old man snag his bag.

And then once more we see her halt the pizza-delivery kid. So each ad gives us a network something like this: A-B-C-D-…-A. The action moves in a circle, back to the woman as a witness, and then back to her at the pedestrian crossing, once more protecting the delivery boy.

Huh? The ending of the ad suggests that by seeing another person acting responsibly, the woman is more inclined to warn the boy. But that act, with the same boy, was what set off the chain of charity in the first place. In strictly realistic terms, we’ve got a sort of möbius strip (no, not a Moby strip), where the head is glued to the tail and the whole cycle is in a twist.

Well, consider the filmmakers’ problem. How could you end it otherwise? The cascade of charity could go on indefinitely, which is not a plausible scenario for a thirty-second spot. Instead, the swallowing-the-tail tactic brings the pattern to a satisfying conclusion, while providing an event that can be the jumping-off point for another cycle in another ad. The last shot of any of the ads is the first shot of any of the others. You can enjoy the whole cycle as a mini-movie that jumps back in time to the original act of kindness at the corner.

Of course the pattern isn’t meant to be realistic. The message is that small acts can make a difference, and that Liberty Mutual tries to live up to an ideal of responsibility in its business. The themes are presented in an oblique, rather poetic story that suggests that kindness is catching and that even as strangers we are bound to help one another. Significantly, the act that’s presented through multiple replays is the most consequential: the woman is in effect saving the pizza boy’s life.

Both the Bourne movies and “Responsibility” show that studying film narrative is endlessly interesting, and storytellers can be quite creative. There’s always room in life for this.