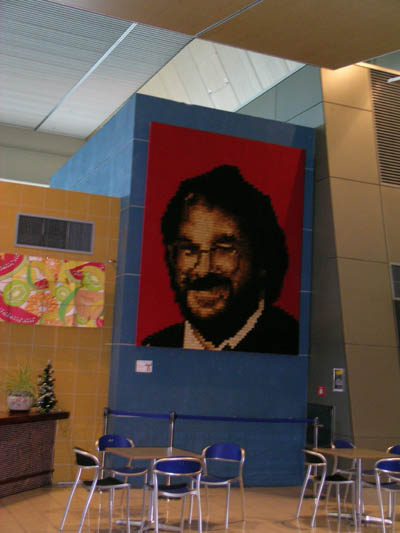 While the new “Frodo Franchise” website is under construction, I offer here a new set of speculations on the Hobbit project.

In my July 20 entry, [1] I cited a statement by Ian McKellen concerning possible progress in the ongoing legal dispute between Peter Jackson and New Line Cinema. The dispute is the reason given by the studio’s president, Bob Shaye, for Jackson’s not being asked to direct the film adaptation of The Hobbit. There Sir Ian said, “I detect that there is movement and it’s movement in the right direction.” That interview went online July 19.

The Royal Shakespeare Company’s tour then moved on to Australia, and on July 26 an Australian Broadcasting Corporation television interview with McKellen brought up the question again. Here the response is somewhat more specific:

SIR IAN MCKELLEN: I talked to one of the Hollywood producers who is in a position to know, who said there seemed to be a little bit of movement and he is a circumspect man so I took that to mean something quite positive and I’ll be seeing Peter Jackson in a couple of weeks when we’re taking The Seagull to Wellington and Auckland.

KERRY O’BRIEN: It would be tragic if it happened without Peter Jackson?

SIR IAN MCKELLEN: It couldn’t happen really, could it? In the way that it ought.

McKellen is currently playing King Lear and, in repertoire, Sorin in The Seagull. The schedule [2] began at Stratford on 24 March and by November will have visited Newcastle-upon-Tyne, Singapore, Melbourne, Wellington, Auckland, New York, Minneapolis, Los Angeles, and London. Currently he is in Wellington, where the engagement that he mentions, including both King Lear and The Seagull, runs August 11 to 13.

This new interview seems to add a little to the one in Singapore that I quoted previously. I don’t want to read too much into McKellen’s statement. Still, I can infer (as usual with the proviso that I have no inside information) a couple of things.

In Singapore, McKellen referred to “detecting” movement in the Hobbit front, but he doesn’t hint as to his source. Here he says he heard this from a producer. Perhaps such a communication would involve said producer sounding him out about the circumstances under which he would be willing to reprise his role as Gandalf. McKellen has made it clear on his website and in interviews, including this new one, that he feels Jackson should direct and has strongly implied that he would not play the wizard under a different director. He has not, however, made a firm public statement to that effect. The fact that in this context he mentions meeting with Jackson, however, suggests that he may have some reason to believe that they could work together on the film.

(Subsequent interviews with McKellen have been published in Australia and New Zealand, but none adds any new information.)

I had the pleasure of interviewing McKellen in early 2005 as part of my research on The Frodo Franchise. He made it perfectly clear that he, like virtually all the cast and crew members that worked on The Lord of the Rings, is intensely loyal to Jackson. I would be very surprised to hear that he had agreed to play Gandalf if someone other than Jackson were at the helm.

Second, these two interviews, one done in Singapore and one in Melbourne, were posted on the internet a week apart. There is no hint that anyone asked McKellen not to say anything more about the Hobbit negotiations. Given the intense interest in this subject, even brief, very general statements like the ones I have quoted can give rise to considerable speculation and discussion—in which I am obviously participating.

As anyone who has read interviews with McKellen knows, he is a very outspoken man. Still, I can’t believe that he would go on making statements about the situation with the Hobbit film if asked not to by the parties involved.

Now I’d like to turn to an issue unrelated to the McKellen interview. One subject that comes up in fan discussions of the Hobbit project on the internet is that of design. Fans point out that if Weta Ltd. does not create the props, costumes, sets, special effects (both digital and physical) and make-up, as they did for The Lord of the Rings, the look of Middle-earth might be noticeably different. Other fans seem to believe that Jackson’s companies own the props, costumes, and sets.

Technically I believe that New Line owns virtually all of the objects made for Rings. Some were given as gifts to the filmmakers, including the full-size Bag End interior which Jackson now has at his country home as a guest house. Some of the actors received their swords, McKellen asked for and got the lizard-shaped door-handles from the Orthanc set, and so on. That’s not a major factor, and the existing objects, which are presumably still in storage in New Zealand, could be re-used for a film of The Hobbit.

Nevertheless, design and execution would remain a big concern. If Weta’s two halves, Weta Digital and Weta Workshop, refused to work on The Hobbit without Jackson directing, New Line and co-producer MGM would have to look elsewhere. (Jackson owns one third of Weta, and the other two-thirds are owned by his long-time friends and colleagues Richard Taylor and Jamie Selkirk.) There are a few CGI facilities in the world that could deliver digital effects on the level of those in Rings—though it’s hard to imagine a Gollum without Andy Serkis’ acting, particularly his voice. But I doubt that there is any company or cluster of companies that could render the physical components of Middle-earth as well as Weta Workshop did for Rings. Tolkien illustrators Alan Lee and John Howe helped give the film’s mise en scene its unified look, and they, too, might not wish to work for a different director.

This is all speculation, and time might prove me to have been completely wrong. Perhaps New Line could successfully assemble a fully new team—director, cast, crew and group of support companies—and start virtually from scratch. Perhaps there is not the solidarity behind Jackson that I have posited here, and some people who worked on Rings might be willing to return for The Hobbit under such circumstances. Perhaps fan opposition would gradually erode once the film went into production.

Unlikely as it may seem now, there was a storm of outrage when Jackson was first announced as directing Rings. Most people had never heard of him. People who knew his comic splatter films were convinced that he would trash Tolkien’s novel. Perhaps a new director could win fans over, as Jackson did so effectively, and make them change their opinions. I have to believe, though, that any new director would face a much harder uphill battle to capture the fans’ hearts and minds.

A recent poll [3] on TheOneRing.net asked whether fans would be likely to go to a film directed by anyone but Jackson. The group saying that they were “very likely” and “likely” not to go was 76.6 %. Those who were “very likely” and “likely” to go totaled 12.9%. Those who said they would wait until they found out who the director would be comprised 10.3%. Many among that 76.6% group would probably grit their teeth and go to the film.

Perhaps the result would be a hit and we shall look back upon the current period as a tempest in a teapot. If so, perhaps the lawsuit will eventually come to court and we’ll get some indications as to the real cost of this dispute.

By the way, Keith Stern, McKellen’s webmaster, has kindly put The Frodo Franchise [4] on the news page of McKellen.com [5], right next to the announcement of Sir Ian’s nomination for an Emmy for his hilarious guest turn on the British series Extras. I seldom get a chance to think of myself as cool, but that is definitely cool!

IMPORTANT NEWS: Just after posting this entry, I discovered (via the excellent site The Hobbit Movie [6]) a Los Angeles Times story [7] on New Line Cinema. There studio officials finally announce that they are indeed negotiating with Peter Jackson concerning the Hobbit film project:

“Eager to move ahead with ‘The Hobbit,’ New Line has quietly been trying to mend fences with ‘Rings’ filmmaker Peter Jackson, who has sued the company over his share of profits from the first ‘Rings’ films. When asked if it was true that company insiders had been in talks with Jackson’s reps, Shaye replied, “Yes, that’s a fair statement. Notwishstanding our personal quarrels, I really respect and admire Peter and would love for him to be creatively involved in some way in ‘The Hobbit.'”

“Moving ahead with ‘The Hobbit’ would tie in to another pivotal New Line issue: In an era when Hollywood is deluged with equity money, will Shaye and Lynne make a run at buying back New Line from Time Warner? Shaye’s reponse was worthy of a U. N. diplomat: ‘We have not expressed that point of view publicly. And if we ever do, [Time Warner chiefs Dick Parsons and Jeff would be the first to know about it.'”

I don’t know why the Hobbit film is tied to that issue, but it presumably has something to do with the fact that investors would be falling over themselves to help finance such a project. The Lord of the Rings may have strengthened New Line enough that it would be better off being once again a fully independent firm–as it was before being acquired by Turner Broadcasting System in 1993. (TBS was in turn acquired by Time Warner in 1996.)

This announcement confirms that my most general speculation in past entries is correct: New Line has been negotiating with Jackson. Whether the proposition is for Jackson to produce and direct or simply to produce (“creatively involved in some way”) remains to be seen.

In response to the LA Times story, Peter Jackson and Fran Walsh have issued a statement [8]: “Peter and Fran have always wanted to do The Hobbit but whether that happens is yet to be decided.”]