Bruges, Belgium is a tourist haven. This reconstructed medieval city boasts museums, canals, cafes, an impressive town square, and other attractions guaranteed to keep credit cards flowing through. It’s a wonderful place to stroll in the sunshine, shop, or watch windmills slowly spin.
In alternating summers, though, Bruges plays host to people who prefer to sit in the dark. This strange cult includes professors, students, and cinephiles from all walks of life. For a small fee Belgians and Netherlanders can plunge into eight intensive days of viewing, lectures, and discussions. While tourists shuttle by unsuspecting, the devout are gathered to watch such items as Rebel without a Cause, the entire Niebelungen, and Destroy All Monsters.
It’s the Zomerfilmcollege, funded by the Flemish side of the Belgian government and run by the Flemish Service for Film Culture in partnership with the Royal Film Archive. In English we’d call it Film Summer Camp. There are no papers or grades. It’s a college in the original sense, a gathering of minds for purposes of deepening knowledge and expanding ideas.
It’s held in the Lumière cinema, a central three-screen moviehouse specializing in arthouse fare (and, for part of our stay, The Simpsons Movie). On the ground floor is a cozy bar, which also serves the lunches and dinners for the collegians. The whole building, like the atmosphere of the event, is unpretentious and welcoming.
Typically there are two principal courses and a sidebar. This year, one course was on Fritz Lang, the other was on widescreen film, and the sidebar was devoted to the French cinematographer Henri Alékan (La Belle et la Bête, Wings of Desire). The schedule is fairly full. At 9:00 AM there’s a lecture, followed by a film screening, then lunch. After lunch, another lecture and another screening. Dinner follows at about 6:30, and evening events follow, with a film or special presentation at 8:00 and then at least one more film afterward. All films are in 35mm prints. 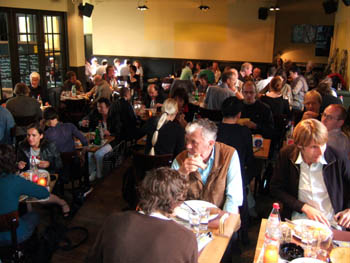 Kristin and I had been lecturers here several times, but this year I came alone. The Lang cycle was to have been handled by Tom Paulus, who gave us Hawks last time, but illness kept him away. He was replaced by several other fine Flemish scholars: Hilde D’haeyere, Steven Jacobs, and Roel Vande Winkel. They supplied lectures on Lang and architecture, on his relationship to the German “street film,” on his relation to the Nazi regime, and on his American work. The retrospective gave a good sampling, running from the Dr. Mabuse films (1922) to Moonfleet (1955; very nice print). For Alékan, there was the filmmaker/ archivist/ novelist Eric DeKuyper, for whom Alékan shot A Strange Love Affair (1984), and the Belgian professor Muriel Andrin, who incisively introduced us to visual influences on Alékan’s aesthetic.

Most lectures are in Dutch, but fortunately for me some are conducted in English. In previous years I’ve lectured on modern Asian film, Hollywood in the 1970s, and the history of film staging. This year my topic was anamorphic widescreen. The talks grew out of my research for an essay to appear this fall in my collection Poetics of Cinema.

The week is now about three-quarters done, and I’ve had a great time. Using clips and slides, I started with a block tracing CinemaScope in the US, with my main examples being Rebel, River of No Return, Moonfleet (intersecting with Lang), The Girl Can’t Help It, and Compulsion. Tonight we’ll get our example of modern usage of the widescreen with a showing of Three Kings.

The next three sessions concentrate on non-US usage of the anamorphic format. Le mépris screened today and will be discussed tomorrow. Oshima’s The Catch will represent a Japanese approach. On Sunday, we end with Johnnie To Kei-fun’s The Mission as illustrating one Hong Kong approach. By nice synergy, To’s Election and Election 2 are playing on other Lumière screens, so collegians can sneak off for some extracurricular viewing.

I enjoy visiting the college, and not just because I like to lecture. A schedule of screenings negotiated by what’s available in a good print from the archive or a distributor forces me to confront films I haven’t studied before. Even for those I know pretty well, seeing them big and beautiful can stimulate new musings. And as any teacher will tell you, even going back over familiar material shows you something fresh.

No lack of scope

For example, I had always loved the way Nicholas Ray used deep space to link his young protagonists in the police station at the start of Rebel. But this time I noticed how Dean’s performance was fitted to the wide frame: He begins the movie prone and pretty much ends there.

I also noticed how Jim’s gesture of covering the toy monkey at the start is echoed by his and Judy’s protective covering of Plato, and by the climax when Jim’s father covers him.

Viewers more familiar with Rebel than me have probably noticed these rhyming gestures and attitudes, but finding them on my own, innocently if you like, fueled my interest in teaching a film I had never studied closely.

Likewise, I wasn’t aware that the glasses motif in Compulsion is linked to imagery of blinding light, a kind of supernatural authority that not only points to the guilty party but also leads the monstrous, pathetic Judd to mercy. The dynamic is given diagrammatically in the closing and opening credits.

My previous post was about watching movies small and super-slow; now I’m reaping the advantage of watching films big and normally. Today, watching Godard’s Contempt on the screen I was able to enjoy those motifs of color, light, and composition that move almost musically through every Godard film (See top of entry.) I was able to identify some more citations (the novel adorning BB’s fanny is John Godey’s noir Frapper sans entrer) and feel the full force of the bold geometry of the framings. I hadn’t noticed before that the first image of the table lamp in the apartment sequence prepares, inversely, for the villa steps in Capri.

And I’d never noticed before how the last time Paul sees Camille, at the rocky outcropping that overlooks the seascape, she becomes that nymph seen in Lang’s rushes and identified as Penelope of the Odyssey.

Perhaps Camille is Penelope for Paul, but not necessarily for us. One task of the film is surely to make us suspicious of neat parallels between contemporary and classical culture; what Godard gives us graphically he often qualifies or negates elsewhere in the film. (1)

I expect to have some further fun with The Catch and The Mission, both of which will look splendid on the Lumière screen.

I turned sixty on the day I showed Rebel. Being here, though, I don’t feel so old. I have to keep up with the collegians and the dedicated archive team–Stef, Tim, Vico, Esther, and Joost. Their energy turns a medieval city into an exuberant adventure in cinema.

(1) After preparing my lecture, I discovered a wonderful website [1] on citations in Godard, with special focus on Le mépris.

The Zommerfilmcollege gang, in 2.35 Scope. Photo by Esther Dijkstra.