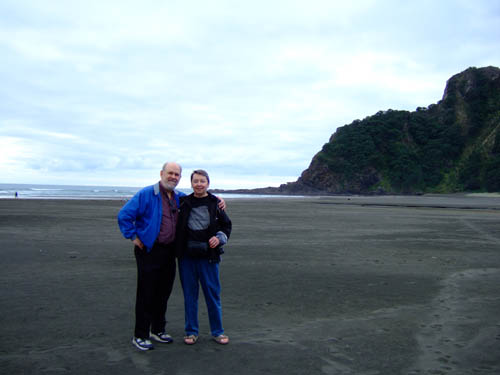 David and I are currently in New Zealand. The University of Auckland offered us both Hood Fellowships, and we will be in residence here for the month of May.

After settling into a hotel room with a splendid view of part of the Auckland harbor and downtown, we were shown around the campus by our host, Brian Boyd, Nabokov scholar extraordinaire. We’ll be giving lectures in classes and to the public over the next week and a half. I’ll also be doing some media interviews relating to The Frodo Franchise, which is due to be published here by Penguin New Zealand, probably in early September. Today, in fact, I met my editors and publicity person at Penguin.

Yesterday Brian and his wife Bronwen Nicholson drove us out to the Waitakere Ranges Regional Park, a large area on the coast west of Auckland. The park is spectacularly beautiful in itself, but our goal was Karekare Beach, one of several black-sand beaches within the park. It was the location where the beach scenes of Jane Campion’s The Piano were shot and even now remains a popular tourist destination. There we are (above), more or less at the spot where Holly Hunter’s character brought her piano ashore in her new home. 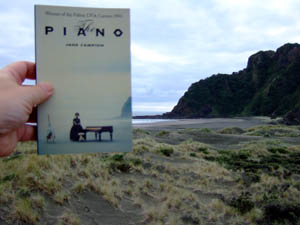 Naturally we have also done some book and DVD shopping. When I first came to New Zealand to work on The Frodo Franchise, back in September and October of 2003, there were almost no Kiwi films on DVD: Once Were Warriors, of course, and Whale Rider, the two most popular New Zealand features, and a few others.

As I discuss in the book (Chapter 10), The Lord of the Rings had a beneficial impact on New Zealand cinema. In large part because of the trilogy, filmmakers gained new skills, new production infrastructure was created, local directors and other talent returned from jobs abroad, and government funding increased. Kiwi films became more popular within their own country. When I talked to Dr. Ruth Harley, CEO of the New Zealand Film Commission, in late 2005, she declared that the national cinema was perhaps having its best year ever, and the momentum does not seem to have slowed.

One sign of success is that one can now find some of the older classics on DVD. There’s actually a “Roger Donaldson Collection” series. (That’s the same Roger Donaldson who is more famous in U.S. for The Bounty, Dante’s Peak, and Cocktail.) We picked up his Sleeping Dogs (1977), notable as the first New Zealand film to play in American theaters, and Smash Palace (1981), the movie that led to his career abroad. A DVD set [1]from this series containing both films is available in the U.S.

I saw Donaldson’s latest, The World’s Fastest Indian (2005) at the American Film Market in 2005—the same occasion upon which I interviewed Dr. Harley for the second time for my book. I opined to her that the film might well be a considerable success in the US. It’s an engaging and entertaining film with Anthony Hopkins giving a marvelous performance in the true story of an eccentric Kiwi who tinkered with an old motorcycle (the “Indian” of the title) and set a world speed record with it.

Unfortunately The World’s Fastest Indian was released without much publicity and didn’t do much business in the US. It’s well worth seeking out on DVD [2].

There are other signs of increased interest in local films. Geoff Murphy’s hit film Goodbye Pork Pie (1981), previously available on a PAL DVD without region coding, has come out in a “Special Collector’s Edition” with a new transfer, a stereo soundtrack not included on the original release prints, and a second disc of extras. Three years ago I would not have predicted that an older Kiwi film would get such treatment. Murphy is better known in the art-cinema world for his later Utu (1983) and The Quiet Earth (1985).

Similarly, May 6 saw the inauguration of a series of eight older Kiwi films [3]to be shown weekly on Sunday nights until June 24 on Māori Television, one of the national channels in New Zealand. Most of these are not specifically oriented toward Māori subject matter—perhaps further indication that a curiosity about Kiwi cinema in general has spread through the national culture. The opening film, The Last Tattoo (1994), was an engrossing political thriller set in 1943. I look forward to seeing as many of the others in the series as time permits.

Recent DVDs have also allowed me to catch up with two 2006 New Zealand films that I had not had a chance to see yet. Both received favorable reviews from Variety when they played at North American film festivals.

Sione’s Wedding is set among the Samoan community of Auckland. It follows four irresponsible young men as they try to fulfill a condition that will allow them to attend the wedding: they must all find “real” dates to bring along. No. 2 deals with an extended family struggling to organize a traditional Fijian feast on short notice when the matriarch declares that she will name her successor at the event.

Both are made with the sorts of technical resources that one would expect of an American indie film. New Zealand films still work with small budgets, but funding is distinctly larger than in the pre-Lord of the Rings era. Strikingly, both of these films deal with the familiar situation of a big family event where irresponsible men must be led to maturity by their women. Both are also highly enjoyable, especially No. 2, with its skillful blend of humor and sentiment and its powerful performance by Ruby Dee as the matriarch. 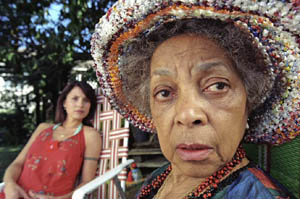 Sione’s Wedding, retitled Samoan Wedding for the North American release, received an enthusiastic review [4] from Variety after its premiere at the Montreal World Film Festival late last summer. Magnolia released it on November 10, 2006, with a run of 14 weeks. It started in two theaters, with a respectable $7,852 average on its opening weekend. Eventually it played in only three theaters, made $72,244, and disappeared. It did, however, come out on DVD [5]. 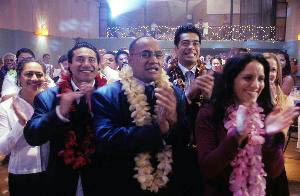 No. 2, also well-reviewed [6] by Variety, is apparently to be released in the U.S. under the title Naming Number Two. For those living in or near New York, it will be shown on May 10 as part of the Pacifika Showcase series [7].

By a happy coincidence, next Saturday on TV2 at 5:30 pm, I’ll be able to watch the premiere of the children’s animated series Jane and the Dragon [8]. Back in October 2003, when I interviewed Richard Taylor, head of Weta Workshop, he mentioned that he was trying to diversify the company’s projects so as to be able to offer steady work to his employees. One project was this series, for which he was then seeking financing.

Just over a year later, in early December 2004, I interviewed Richard again. By another coincidence, that was the day when Weta was beginning to test its new motion-capture studio that had been created to help in the production of Jane and the Dragon and other projects. Now at last the series is finished.

It’s already playing on Canadian TV, and the YTV.com site offers an entire episode for viewing here [9]. The official website, aimed specifically at children, is here [10].

I hope to report back on it and other media-related experiences here in New Zealand, or Aoteroa, which means “The Land of the Long White Cloud.” It’s a well-deserved name. Anyone who thinks the mountains and other unspoiled landscapes shown in The Lord of the Rings and The Lion, the Witch and the Wardrobe were created by CGI are mistaken. Much of New Zealand actually looks like that. I’m hoping to visit a few of the film locations that I haven’t seen on previous visits. 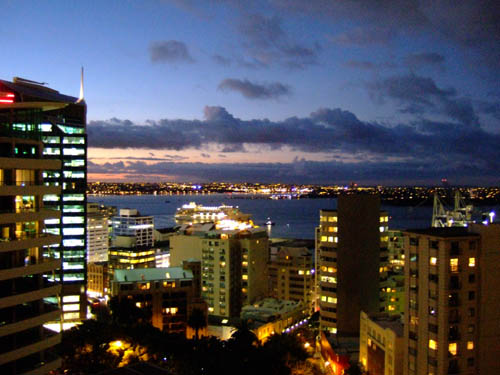 The view from our hotel balcony.