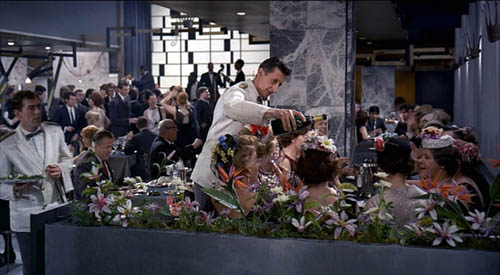 DB asks: Can a film shot be amusing in itself?

Of course a shot can show us a gag that’s funny. If Jerry Lewis or Adam Sandler is going to fall off a ladder into a Dumpster, we want to see everything clearly. Here the framing can be modestly functional. But can the very choice of lens, angle, scale, or composition play a stronger role? Can camerawork itself provide the gag?

Barry Sonnenfeld, cinematographer for the Coens and now a prominent director, thinks so. He’s remarked [1] that an extreme wide-angle lens is inherently funny. In the commentary for the DVD of RV [2], he explains, “You just put a big 21mm lens really close to [Will Arnett’s] face and you get comedy without him having to do anything.” I don’t have an RV frame handy, but here’s an example from Big Trouble, with both the wide lens and the low-angle creating the sort of grotesque disproportions that Sonnenfeld finds funny. 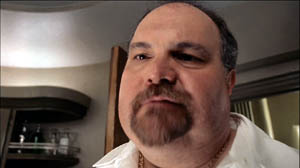 Sonnenfeld got this idea, he claims, by working on the Coens’ early films, which used wide-angle shots for cartoonish exaggeration. In Raising Arizona, the angle and lens length make the wandering baby loom; we’re not used to seeing an infant rampant. 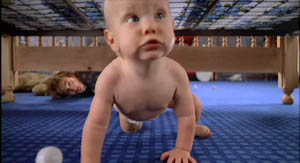 But the Coens had a broader approach to funny framings than Sonnenfeld acknowledges. For instance, they created humor by means of geometrical tableaus. In H. I.’s parole hearing in Raising Arizona, an absurd solemnity is set up by the symmetrical layout of actors. At the apex of the triangle, a portrait of Senator Barry Goldwater blesses the occasion. 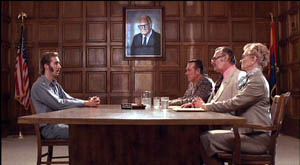 Even more memorable is the forward tracking shot down the bar top in Blood Simple. The camera, encountering a drunk sprawled in its path, simply crawls over him.

The silent comedians knew how to use camera position to build up their gags. Long ago Rudolf Arnheim praised the opening scene of Chaplin’s The Immigrant. As a ship rocks treacherously, we see Charlie from the rear heaving and kicking on the railing. As Arnheim puts it, “Everyone thinks the poor devil is paying his toll to the sea.” (1) 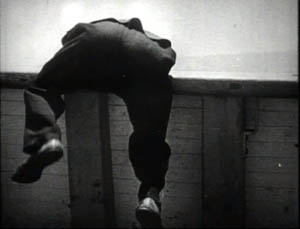 But then Charlie turns toward the camera to reveal he’s been struggling to reel in a fish. 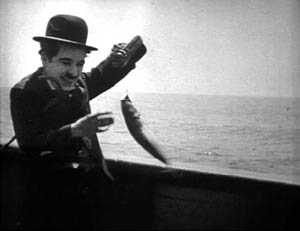 Here the framing creates the gag by what it doesn’t show. “The element of surprise,” Arnheim notes, “exists only when the scene is watched from one particular position.” The camera setup also makes an expressive analogy; we probably never noticed the similarity between vomiting and wrestling a fish.

One of my favorite comic framings occurs in The General. Buster’s train is hurtling along, and a cannon on one car is suddenly trained on him. The first shot gives us the situation with maximum clarity, in a profiled shot. But then Keaton cuts to another angle, showing the cannon in the foreground and Buster trying to escape it. 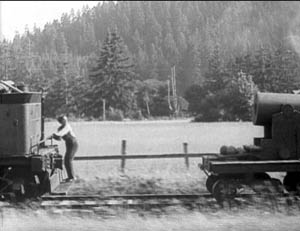 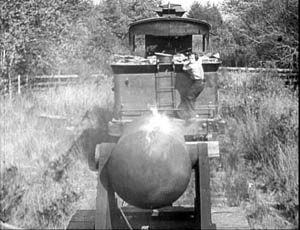 Nothing much has changed in the scene’s action, just the camera setup. But now we get to watch the cannon draw a bead on Buster. Audiences invariably laugh at this shooting-gallery image.

Jacques Tati is in many ways the modern heir of Keaton, and humor in his sequences often stems simply from a juxtaposition of elements in a single frame. An older man ogling a pretty woman on the beach is funny in a standard way, but in M. Hulot’s Holiday, we get more. 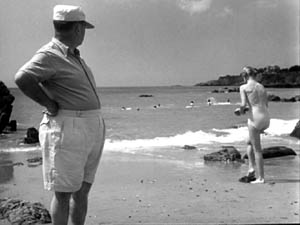 No words are spoken, but Tati’s staging and framing juxtapose the very different bodies in telling ways. We’re invited to note the difference between age and youth, paunchiness and health, passing yearning and its likelihood of fulfillment.

Play Time, Tati’s masterpiece and one of the greatest films ever made, offers an abundance of subtly comic framings. The shot below promotes the film’s theme that modern architecture has homogenized the world. The posters present the same building in different locales, with only stereotyped add-ons to distinguish the US, Hawaii, Mexico, and Stockholm. As one of the ladies on Barbara’s tour says, “I feel at home everywhere I go.” 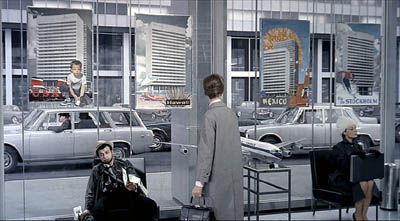 Again, though, a juxtaposition adds to the humor. Throughout Play Time, Tati suggests the disparity between the joy of travel as promoted by our culture and the stress of hustling from place to place. The promise of the posters is undercut by the dazed traveler who’s flopped underneath them, clutching maps and flightplans. And he in turn contrasts with the no-nonsense businesswoman on the far right.

Tati can create comedy by the exact placement of the camera; a foot to the left or right and the gag would vanish. In the image at the start of this entry, the waiter is pouring champagne, but he seems to be watering the ladies’ flowery hats, which mask their champagne glasses. The same sort of exactitude of placement occurs in a shot we use as an illustration in Film Art (p. 195). M. Hulot is leaving an office building when it’s closing. As a guard locks down a doorway, his cap falls off and Hulot is startled: the guard seems to have grown horns. 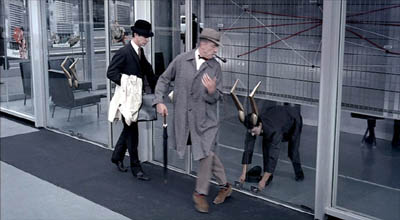 Can we find funny framings in current films? Yes! I was prompted to write this blog while rewatching Shaun of the Dead. Zombies have overrun London, and two groups of human survivors meet. Shaun is leading one, Yvonne is leading the other. Instead of being presented as a mingling of the two groups, the scene plays out along two lines of people. Have a look.

The gag’s premise is that each survivor has a counterpart in the other line. There are two posers in brown leather jackets, two can-do girls, two matrons, and two distracted videogame geeks. I wonder how many first-time viewers catch this? (Kristin did, I didn’t.)

These mirror-image depth shots set up the real gag, which pays off in another clever composition. When the two groups set off on separate paths, each member passes and smiles awkwardly at her/his lookalike, while the framing underscores their likenesses.

As they walk through the frames, the similarities increase.

The framing makes a clever point about conformity and social stereotypes. Ending the procession with the two gamers, oblivious to the danger and to one another, tops the topper, as gag writers would say.

Tati would have loved these shots.

Of course I’ve simplified things for the sake of making my point. It’s not that the camera is somehow capturing a free-standing event by selecting the most amusing view. In all these examples, the staging is calculated to match the camera position. Staging, like camerawork and other film techniques, creates filmic narration. I’m only suggesting that in these scenes, the staging wouldn’t work on its own to create humor, nor would a simply functional framing. Choices of lens, camera position, and the like seem to be critical in making the gags work.

Finally, a borderline case that intrigues me. In last year’s Crank, our hero is in overdrive thanks to a constant intake of drugs. Stepping into an elevator, he faces a man who starts speaking Japanese. Naturally, his line is subtitled. 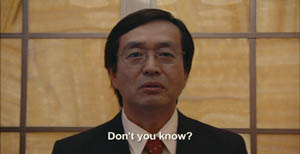 But then we get this: 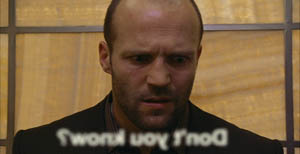 The idea of the head-on reverse angle is carried to comic extremes by reversing the subtitle as well (and blurring it to reaffirm the hero’s muzzy mental state).

I think that aspiring filmmakers can learn a lot from this tradition. Our films need more pictorial creativity, which often doesn’t require fancy CGI. Stylistic handling can add fresh layers to a basic story situation, and astute filmmakers can be alert to the possibilities of comic compositions and funny framings.

PS 4 May: Owen Williams writes to point out that the gag in Crank depends not just on a reverse framing but a play on the idea of lens focus. “The subtitle is fuzzy because it’s supposed to exist in real space (at least in this character’s head), with the letters hanging in mid-air in front of the Japanese man. Therefore in the reverse angle they appear out of focus (fuzzy) because they are closer to the camera. It’s a great gag.” Thanks, Owen.

PPS 8 May: I’ve gotten a lot of correspondence about this blog entry. Here are some nifty supplements:

Kent Jones was reminded of the shot in High Anxiety in which the camera moves to a picture window, with people dining behind it, and then crashes through the glass.

Sam Adams recalled a shot in Killer of Sheep that had something of the same effect, showing men trying to load a car engine onto the bed of a pickup truck. But the context isn’t itself comic. Sam reflects: “Based on the examples you choose, it seems that ‘comic framing’ invariably involves a level of self-consciousness, a feeling that the audience is being deliberately toyed with by the figure behind the camera. We get a sense that the scene has been staged for our amusement, rather than feeling that we must identify emotionally with whatever the characters are going through (which even in comedies is often quite sad).”

Stew Fyfe found a host of in-jokes in the Shaun of the Dead shots:

“Viewers of British television might notice an extra parallel between the shots. The actors playing each of the group leaders, Simon Pegg (Shaun) and Jessica Stevenson (Yvonne), were the leads in the sitcom Spaced (also directed by Edgar Wright, the TV predecessor to Shaun). Also split between the two groups are Lucy Davis (Shaun’s Group, hat) and Tim Freeman (Yvonne’s group, second in line), from original The Office and Dylan Moran (Shaun’s group, glasses) and Tamsin Greig (Yvonne’s group, hat), the leads of the sitcom Black Book. Yvonne’s mum (second matron) is played by Julie Deakin, who played the drunk and desperately lonely/horny landlady in Spaced.”

Thanks also to Bryan Wolf for a note on the same subject.

Finally, this from Jeremy Butler:

“I like your example from The General, but my favorite example of comic framing from Keaton’s work (and one I use in class to illustrate how he was more “cinematic” than Chaplin) is in Sherlock, Jr. Buster runs along the top of a freight train, and is then flushed to the tracks by a spout from a water tank. What makes it funny, I’d suggest, is the choice to frame it from the side, at a right angle to the tracks (much like the first General frame in your example). It minimizes the size of Buster’s body and contrasts him with the size of the train cars. Plus, it emphasizes the movements in opposite directions of his body and the train.
All these elements make it visually funny in a way that would not be apparent if it were filmed from an oblique angle or from behind the train.
But then, maybe I just like to show it because it’s the scene in which Buster literally broke his neck–which he didn’t realize until decades later when being x-rayed for something completely different!”

Thanks to everyone who wrote in with comments and who linked to this entry.