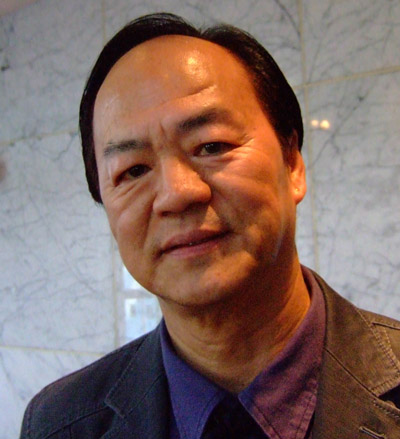 Some miscellaneous glimpses of people I’ve run into at the Hong Kong International Film Festival. If the notion of six degrees of separation holds good, chances are you know some of them, or someone you know does.

Up top, the great actor Ti Lung, remembered from Chang Cheh films and perhaps most famous for his role as the honor-bound brother in John Woo’s A Better Tomorrow. 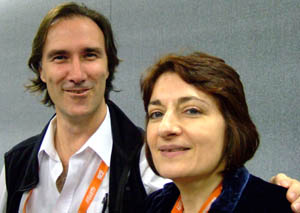 Li Cheuk-to, one of Hong Kong’s most distinguished film critics and Artistic Director of the festival. Ah-to is at the center of HK film culture, having founded the Critics Society and played a central role in the festival for decades. This shot on the Star Ferry catches him in an unusual moment of calm; normally he’s doing nine things at once. 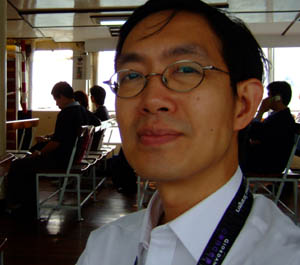 Ivy Shiau, Operations Manager of the festival, starting to set up the room for press and guests. 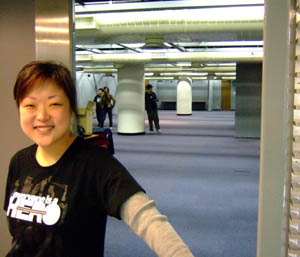 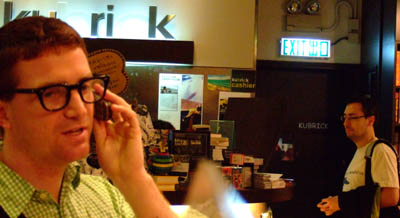 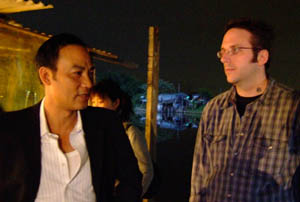 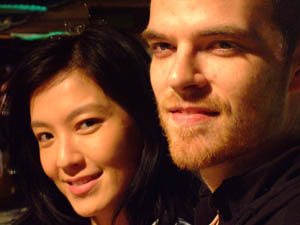 At the reception for the Asian Film Awards: Ho Yuhang (Rain Dogs) and Bong Joon-ho, who would win big with The Host. 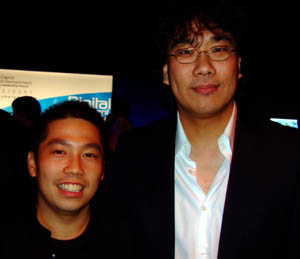 Killing time between screenings at an outdoor cafe: Grace Mak, Hong Kong critic doing graduate work at the University of Singapore, and Nat Olsen, film and music maestro. A graduate of UW, he’s dj-ing all over Asia and hosting the site Hong Kong Hustle [3]. 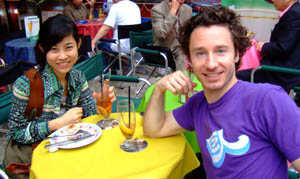 Here’s Sam Ho, Head Programmer at the Hong Kong Film Archive, keeping cool as we wait in line for a screening. 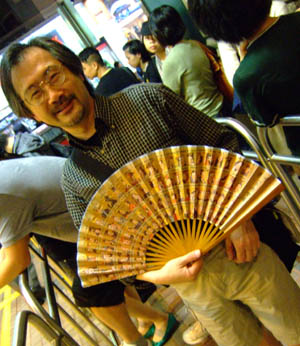 Here’s Yvonne Teh of Penang, huge fan of Asian film and proprietor of the Webs of Significance blog [4]. 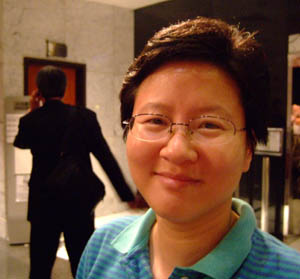 Note how my background skilfully keeps the cellphone motif going. Actually, if you photograph anything here but marine life, somebody with a mobile will be in the shot.

Jupiter Wong is the HK film industry’s top still photographer and the wildest man I’ve ever met. Upon meeting me this year, he said, “Why do you look so old?” He has gotten a haircut, but otherwise there’s no sign of domestication. 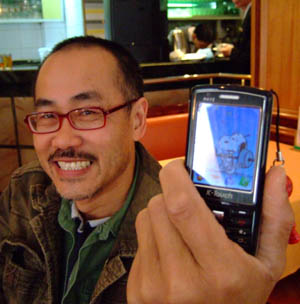 I met Athena Tsui when I first came to Hong Kong twelve years ago. A graduate of U Toronto, she has worked in many phases of film production, distribution, and exhibition. She routinely helps out the festivals with translation, guest wrangling, and planning. She’s been my supreme guide to HK film insiders’ gossip and to Mongkok shopping. 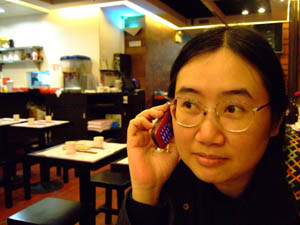 I couldn’t attend the talk given by Jean-Michel Frodon, editor of Cahiers du cinema, but I did see him outside another event. We first met in Shanghai and keep running into each other at various festivals. 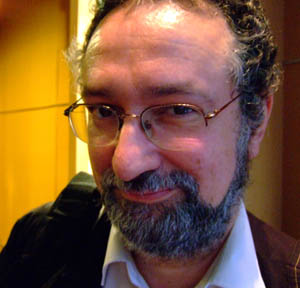 Another old friend, Virginia Wright Wexman of Chicago, was leading a group of visitors to the festival. The smile is doubtless the result of her recent retirement from the University of Illinois–Chicago. 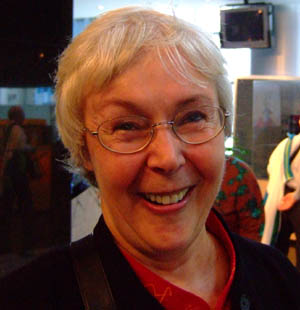 Peter Tsi is the boss of it all, the Executive Director of the Festival. You can usually find him multitasking. 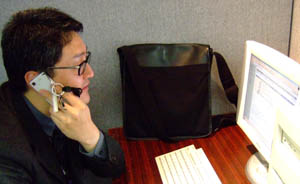 Shu Kei, another friend from my first visit, is head of Film at the Academy for the Performing Arts. He has done everything–made films (see especially A Queer Story), distributed them, programmed the festival, and taught film aesthetics and production. His knowledge of cinema is encyclopedic. 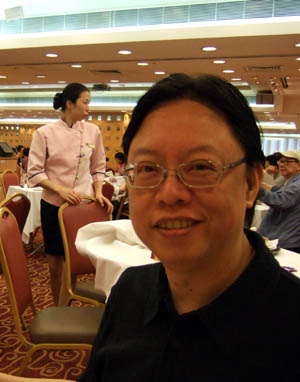 Akiko Tetsuya is a perennial HKIFF presence. She has done a wonderful book [5] on Brigitte Lin. 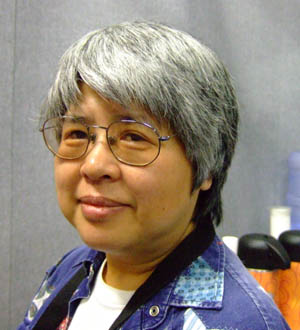 Shelly Kraicer founded one [6] of the first Chinese cinema websites. He’s a prolific writer and an active consultant on Chinese film for Venice, Vancouver, and other festivals. 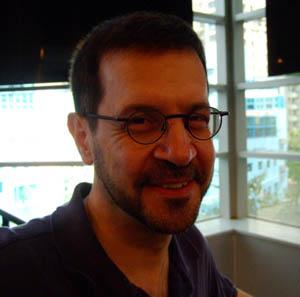 The very first person I came to know when visiting the festival in ’95 was the warm and generous Michael Campi. Michael is a pharmacist by trade and a devoted cinephile and festival consultant in his native Australia. 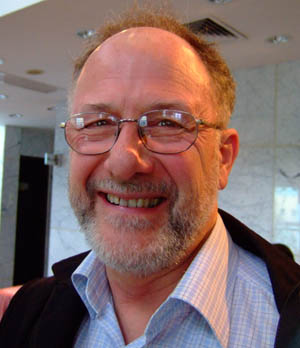 Frederic Ambroisine is an editor of the Paris magazine Kumite and is a busy producer of documentaries on Chinese cinema. If you own French editions of the Shaolin Monastery or One-Armed Swordsman series, you have bonus materials prepared by Fred. Below he’s rejoicing in his purchase of Cutie Honey action figures. 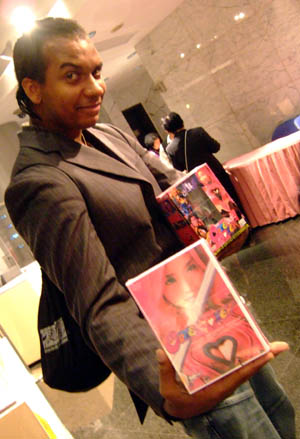 Other folks’ pix can be found if you trawl back through my previous entries. To all those whom I failed to snap, or whose shots didn’t come out well, I apologize. But all the more reason for you to return next year. Fame awaits you!

Speaking of other years….Two regular guests and old friends couldn’t attend this spring, so I can’t resist slipping in shots of them from the 2006 festival. First, Mike Walsh of Flinders University, Australia (and a UW grad). 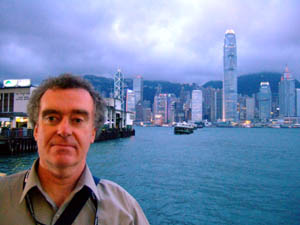 And here’s Peter Rist of Montreal’s Concordia University, at last year’s launch of the book on Milkyway Image. 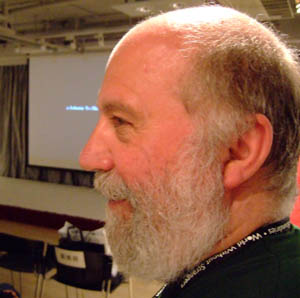 Finally, a shot of the wonderful Lisa Lu, star of many Shaws productions and other major pictures, such as Bertolucci’s Last Emperor. You can see her in a Li Han-hsiang frame I posted earlier [7]. 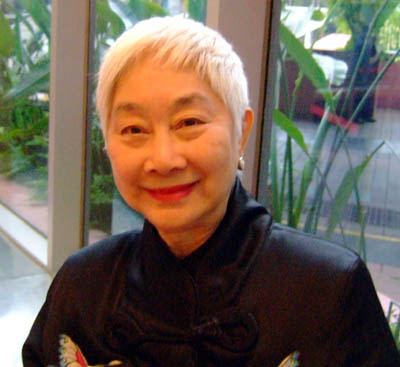 I can hardly believe that the festival is coming to an end. I leave for home on Thursday, but I hope to tack on one more entry before I go.